Why Will God Turn the Hearts of the Fathers to the Children? | Meridian Magazine 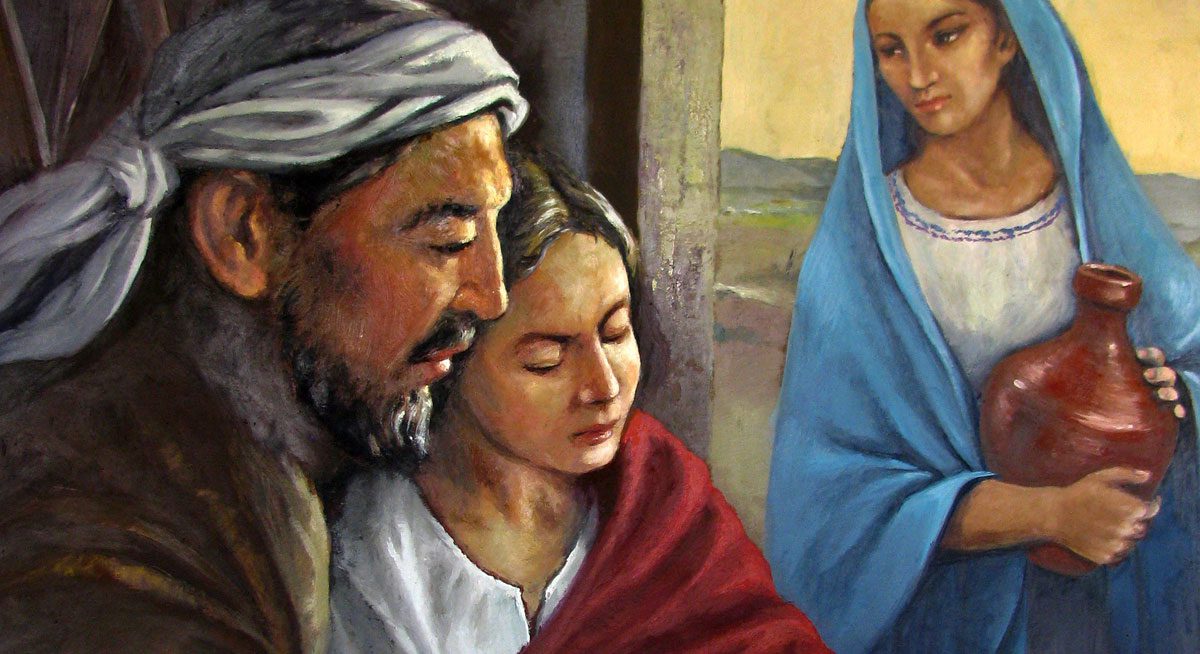 Why Will God Turn the Hearts of the Fathers to the Children?

At the end of Jesus’ quotation of Malachi, the people learned that the Lord would send Elijah “before the coming of the great and dreadful day of the Lord” and that Elijah would “turn the heart of the fathers to the children, and the heart of the children to their fathers.” (3 Nephi 25:5–6; Malachi 4:5–6).[1] Immediately following this quotation, Jesus “did expound all things, even from the beginning until the time that he should come in his glory” (3 Nephi 26:3). This suggests that something about Malachi’s prophecy, and especially Elijah’s role as a preparatory messenger, was of great importance to the Plan of Salvation.[2]

Although the King James Version states that Elijah would turn the hearts of fathers and children, scholars have noted that the equivalent term in the Septuagint (the Greek version of the Old Testament) can be translated as restore and that the original Hebrew can be appropriately rendered as reconcile.[3]

Interestingly, when Moroni repeatedly appeared to Joseph Smith in his room, he quoted this very same verse, but he altered it slightly so that Elijah would “plant in the hearts of the children the promises made to the fathers,”[4] suggesting that like a seed, the covenantal relationship between these two groups could be nourished and regrown (Joseph Smith—History 39, emphasis added).[5]

Elijah’s needed influence to turn, reconcile, restore, and even plant promises in the hearts of fathers and children presupposes that, at some point or another, the familial relationship between generations would be broken, lost, or otherwise compromised. As Jesus prophesied, “the love of many shall wax cold” (Matthew 24:12). Alan J. Hawkins, Clifford J. Rhoades and David C. Dollahite have argued that in the past two hundred years, industrialization, urbanization, and an emphasis on individual freedom have led to a “significant turning of paternal hearts away from their children.”[6]

Whereas a predominant “agricultural and rural setting” once allowed many fathers and mothers to be “intimately involved in the daily lives of their children,” the rise of factories and industrialized professions has led parents to reduce time spent with children and family members.[7] Moreover, “[w]hen the recent data on divorce and nonmarital childbearing are added to this portrait, we see fathers as increasingly on the periphery of children’s lives.”[8]

This unfortunate trend has only been furthered along by the Western world’s increased emphasis on individualism. This self-centered philosophy triumphs the freedom and desires of the individual over the obligations and duties that accompany familial relationships. Yet, after “having freed themselves from the bonds that selfless caring for others necessarily brings, people may find themselves so disconnected from familial community and institutional relationships that their unfettered self-fulfillment feels like desperate loneliness.”[9]

Latter-day Saints see Elijah’s visitation to the Kirtland Temple in 1836 as a direct fulfillment of Malachi’s prophecy. Why did Elijah come? He came to restore the sealing power that binds husbands and wives and their children together for time and all eternity. Genealogical research and vicarious temple work for the dead have expanded the reach of this intergeneration work (see Doctrine and Covenants 110).[10]

Also, there is much evidence that Elijah came to strengthen and mend family relationships here and now among the living. Elder Russell M. Nelson explained that upon the prophesied return of Elijah, “natural affection between generations began to be enriched.” He further concluded, “This restoration was accompanied by what is sometimes called the Spirit of Elijah—a manifestation of the Holy Ghost bearing witness of the divine nature of the family.”[11]

The Spirit of Elijah can be seen as a subtle but powerful counteractive influence against forces that are currently threatening family relationships.[12] Modern family research, for instance, demonstrates that the majority of today’s fathers now believe that caring for their children’s physical and emotional needs is just as important as providing financial security.[13] The introduction to one recent study on fathers explains,

We have endeavored to accurately portray the desire and commitment of today’s fathers to play an important role as parents and family members, not simply as financial providers. When discussing the changes we observe, we have often been asked, “Is this all a Millennial thing?” Are the changing attitudes about fatherhood the result of a generational shift that is underway?[14]

Certainly not every family development of the modern age is healthy, but the increasing concern for parental interaction and influence among family members is encouraging.[15] The hearts of parents are turning more to their children and posterity. According to Hawkins, Dollahite, and Rhoades, this widespread restoration of familial care is evident in at least three notable areas: “(1) a small but growing number of fathers are becoming more involved in the daily care and nurturing of their children, (2) the status of children is improving, and (3) people are showing greater concern for the natural environment that will be passed on to future generations.”[16]

These types of positive societal shifts can be seen as complimentary and perhaps even preparatory to the acceptance and appreciation of the sealing power restored by Elijah in the Kirtland temple. A world that does not know how to love, appreciate, and care for living family members and future generations would naturally have a difficult time fulfilling the millennial work to redeem their kindred dead and all of God’s children.[17] Yet for those who already love and cherish current family relationships, the message of eternal families, restored sealing powers, and vicarious ordinances can readily be accepted with joy.

The power of loving family and communal relationships is directly apparent in the record of Nephite society following Christ’s ministry among their people. Mormon reported that “they were married, and given in marriage, and were blessed according to the multitude of the promises which the Lord had made unto them,” (4 Nephi 1:11), and that “there was no contention in the land, because of the love of God which did dwell in the hearts of the people” (v. 15).

He concluded that “surely there could not be a happier people among all the people who had been created by the hand of God” (v. 16). This ideal social model—based on Christ’s doctrines, teachings, promises, and sacred experiences with parents and children—prefigured what has been made possible through the Spirit of Elijah in the latter days.[18]

All those who allow this divine influence to deeply penetrate their hearts can likewise receive an abundance of familial love and happiness, which, when accompanied by sacred priesthood ordinances, will eventually be sealed up and “coupled with eternal glory” (Doctrine and Covenants 130:2) by virtue of the powers and keys which Elijah came to restore. Elder David A. Bednar assured, “The promises made to Abraham, Isaac, and Jacob will be implanted in your hearts. … Your love and gratitude for your ancestors will increase. … And I promise you will be protected against the intensifying influence of the adversary.”[19]

Aaron P. Schade and David Rolph Seely, “The Writings of Malachi in 3 Nephi: A Foundation for Zion in the Past and Present,” in Third Nephi: An Incomparable Scripture, ed. Andrew C. Skinner and Gaye Strathearn (Salt Lake City and Provo, UT: Deseret Book and Neal A. Maxwell Institute for Religious Scholarship, 2012), 261–279.

[1] This verse concluded Jesus’ two-chapter quotation of Malachi 3 and 4, which are the concluding chapters of the Old Testament. For a more general treatment of Jesus’ quotation of Malachi, see Book of Mormon Central, “Why Did Jesus Give the Nephites Malachi’s Prophecies? (3 Nephi 24:1),” KnoWhy 218, (October 27, 2016).

[2] See “Elias,” in the LDS Bible Dictionary, online at lds.org, for a brief explanation of preparatory messengers.

[4] It’s possible that Moroni rendered the verse in a way that was more culturally and scripturally linked to the Book of Mormon, which he revealed to Joseph Smith in the same interview (see Joseph Smith—History 34–35). Alma, for example, preached that the word of God should be planted in the heart and then nourished until it grows into a tree of life (see Alma 32:28–43, emphasis added). For a treatment of trees growing from hearts in ancient American religious thought, see, John L. Sorenson, Mormon’s Codex: An Ancient American Book (Salt Lake City and Provo, UT: Deseret Book and Neal A. Maxwell Institute for Religious Scholarship, 2013), 465–466. Sydney B. Sperry, on the other hand, simply concluded that Moroni adjusted the verse so that it would be easier for Joseph Smith to understand. See Sidney B. Sperry, “Moroni Expounds Old Testament Scriptures,” Journal of Book of Mormon Studies 4, no. 1 (1995): 275.

[5] It should also be noted that Moroni added a reference to Elijah and the priesthood in his quotation of Malachi’s prophecy: “And again, he quoted the fifth verse thus: Behold, I will reveal unto you the Priesthood, by the hand of Elijah the prophet, before the coming of the great and dreadful day of the Lord (Joseph Smith—History 1:38). For further analysis of Moroni’s use of the Old Testament in his instruction to Joseph Smith, W. Jeffrey Marsh, “Training from the Old Testament: Moroni’s Lessons for a Prophet,” Ensign, August 1998, online at lds.org.

[12] See Bonnie L. Oscarson, “Defenders of the Family Proclamation,” Ensign, May 2015, 14–16, online at lds.org, to identify meaningful ways to protect and defend against such forces.

[13] See Brad Harrington, Fred Van Deusen, and Beth Humberd, The New Dad: Caring, Committed and Conflicted (Chestnut Hill, MA: Boston College Center for Work and Family, 2011), 12–13, online at www.bc.edu. It should be noted that these studies were conducted in the United States of America, and therefore their results may not reflect the attitudes or conditions of other nations.

[15] For examples of unhealthy attitudes toward family in modern society, see L. Tom Perry, “Why Marriage and Family Matter—Everywhere in the World,” Ensign, May 2015, 41, online at lds.org.