Why Were Three Key Witnesses Chosen to Testify of the Book of Mormon? | Meridian Magazine 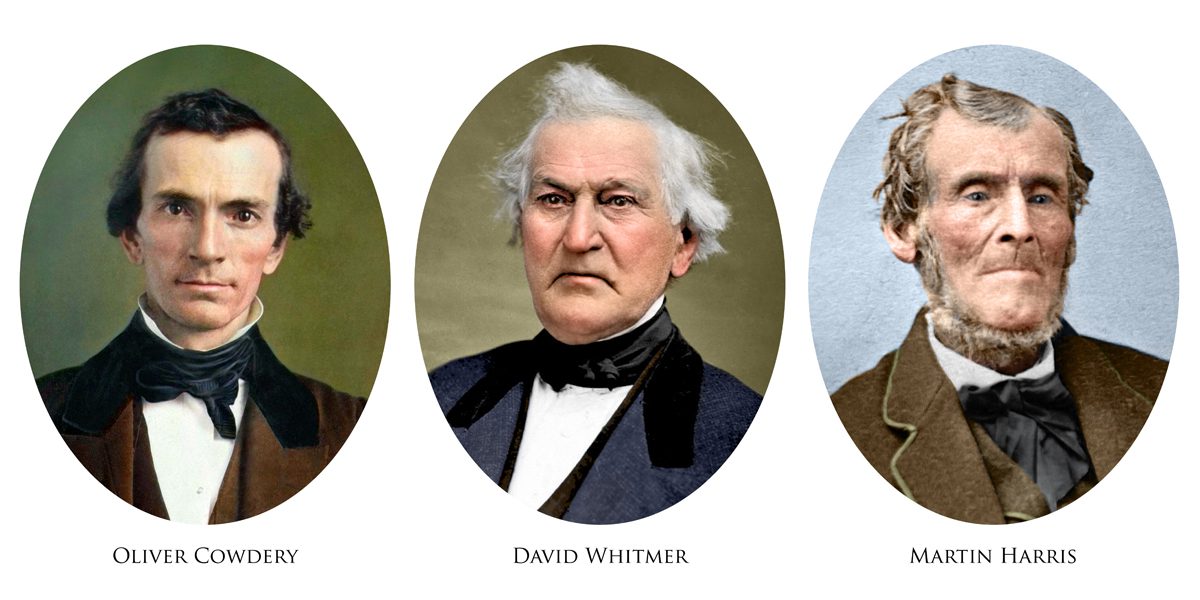 Why Were Three Key Witnesses Chosen to Testify of the Book of Mormon?

In the mouth of three witnesses shall these things be established.
Ether 5:4

The prophet Nephi foresaw that the gold plates of the Book of Mormon would be “hid from the eyes of the world” and that “the eyes of none shall behold it save it be that three witnesses shall behold it, by the power of God” and “none other … shall view it, save it be a few according to the will of God” (2 Nephi 27:12–13). Moroni further declared that “in the mouth of three witnesses shall these things be established” (Ether 5:4). In response to these and other revelations,[1]

Oliver Cowdery, Martin Harris, and David Whitmer, accompanied by Joseph Smith, went into the woods to pray for a special witness of the Book of Mormon.[2] In the resulting vision,[3] which occurred the end of June, 1829, these men were visited by the angel Moroni, who presented the gold plates to their view and “turned over the leaves one by one, so that [they] could see them, and discern the engravings thereon distinctly.”[4]

In this remarkable shared experience, they all heard a voice from heaven confirming the truthfulness of the record[5] and were then shown the sword of Laban, the Liahona, the Urim and Thummim, and the breastplate.[6] A careful analysis of this experience and the lives of these Three Witnesses can strengthen faith that Christ’s church has been restored to the earth through the prophet Joseph Smith.[7]

The solemn testimony of these three additional witnesses “has appeared in every edition of the Book of Mormon from the beginning.”[8] Each of these specific men sacrificed much to help with the translation and publication of the Book of Mormon, and it’s likely this is a significant part of why they were chosen (see Ether 5:2).[9] Importantly, throughout their lives and even during periods of estrangement from the church, none of these witnesses ever denied their testimonies.[10]

Oliver Cowdery acted as Joseph’s primary scribe,[11] and throughout his ministry served as a “second witness of many critical events in the restoration of the gospel.”[12] For instance, during the period of translation, he, with Joseph Smith, received the Aaronic and Melchizedek Priesthoods from angelic messengers.[13]

Shortly after rejoining the Church, and in a public speech recorded by Reuben Miller, Cowdery stated, “I beheld with my eyes. And handled with my hands the gold plates from which [the Book of Mormon] was translated. I also beheld the Interpreters. That book is true.”[14]

According to Richard L. Anderson, throughout Cowdery’s life, “He told the same simple story of the vision, whether under privation, persecution, resentment against the translator of the Book of Mormon, ridicule by non-Mormons, or knowledge of imminent death.”[15]

When asked by the twelve-year-old William Glenn if he had indeed seen the plates and the angel, Harris declared, “Gentlemen, do you see that hand? Are you sure you see it? Are your eyes playing you a trick or something? No. Well, as sure as you see my hand so sure did I see the angel and the plates.”[18]

With similar conviction, and often using similar analogies with concrete descriptions, Martin Harris reaffirmed his testimony over and over throughout his long life.[19]

David Whitmer, the most interviewed of the witnesses, claimed that throughout his life “thousands came to inquire” and according to Anderson, “over fifty of these conversations are reported in reasonable detail in contemporary diaries, letters, and newspapers, supplemented by later recollections.”[21] Anderson described Whitmer as “Impeccable in reputation, consistent in scores of recorded interviews, obviously sincere, and personally capable of detecting delusion—no witness is more compelling that David Whitmer.”[22]

Although Whitmer was the only one of the Three Witnesses who never mended his broken ties with the Church, his deathbed testimony stands as a final stamp of certitude of his lifelong conviction: “if God ever uttered a truth, the testimony I now bear is true. I did see the angel of God, and I beheld the glory of the Lord, and he declared the record true.”[23]

The Lord has declared that “in the mouth of two or three witnesses shall every word be established” (Doctrine and Covenants 6:28). This principle was the basis of ancient Israelite law (see Deuteronomy 19:15; 2 Corinthians 13:1),[24] and witnesses still play a crucial role in legal systems throughout the modern world.[25] In a typical serious legal setting, the testimonies of witnesses help a jury or a judge to establish facts and “reach conclusions about the relative persuasiveness of the evidence.”[26] For these same reasons, God provided three key witnesses to testify of His work through the miracle of the Book of Mormon.[27]

According to Steven C. Harper, the witnesses to the Book of Mormon provide “some of the most compelling evidence in favor of its miraculous revelation and translation.”[28] In particular, the Three Witnesses support Joseph Smith’s original testimony with the following jointly related facts: (1) three other individuals beheld the gold plates for themselves, while at the same time they (2) “were also introduced to the angel who was involved in revealing the plates,” (3) heard a voice from heaven confirming the record’s truthfulness, and (4) viewed the ancient artifacts, which accompanied the plates.[29]

The joint testimony of these witnesses may be especially important for the modern age, with its increasingly skeptical attitude toward religion and any claims of divine manifestations.[30] As Anderson explained, “One cannot dismiss the experience easily, for each man so testifying impressed his community with his capacity and unwavering honesty, and all three consistently reaffirmed the experience in hundreds of interviews throughout their lives.”[31]

Furthermore, these men were each stubborn in their own way and demonstrated on multiple occasions that they were willing to follow the path that they individually felt was right, even under heavy adverse pressures.[32] They were not the type to be easily swayed or duped.[33]

On his deathbed, Oliver Cowdery said to Jacob Gates: “I am a dying man, and what would it profit me to tell you a lie? I know . . . that this Book of Mormon was translated by the gift and power of God. My eyes saw, my ears heard, and my understanding was touched, and I know that whereof I testified is true. It was no dream, no vain imagination of the mind—it was real.”[34]

As described by President Ezra Taft Benson, the testimony of the Three Witnesses was a part of the Lord’s “built in … proof system of the Book of Mormon.”[35] Moroni declared that accompanying these three earthly witnesses would be three heavenly witnesses—“the Father, and the Son, and the Holy Ghost”—and that at the last day these combined witnesses would “stand as a testimony against the world” (Ether 5:4).

Larry E. Morris, “The Experience of the Three Witnesses,” Revelations in Context December 26, 2012, online at history.lds.org.

[1] For the role that 2 Nephi 27:12 and Ether 5:2–4 played in generating interest for the three witnesses to seek a divine manifestation, see John W. Welch, “The Miraculous Translation of the Book of Mormon,” in Opening the Heavens: Accounts of Divine Manifestations, 1820–1844, ed. John W. Welch (Salt Lake City and Provo, UT: Deseret Book and BYU Press, 2005, 2nd edition 2017), 115–117, n. 111. Accompanying the prophetic promises about the three witnesses found in the Book of Mormon is also a revelation recorded in Doctrine and Covenants 5:11–15. Moreover, Joseph apparently obtained the Lord’s approval before venturing into the woods with the prospective witnesses. See Steven C. Harper, “The Eleven Witnesses,” in The Coming Forth of the Book of Mormon: A Marvelous Work and a Wonder, ed. Dennis L. Largey, Andrew H. Hedges, John Hilton III, and Kerry Hull (Salt Lake City and Provo, UT: Deseret Book and Religious Studies Center, Brigham Young University, 2015), 118; Lucy Mack Smith, History, 1844–1845, p. 11, online at josephsmithpapers.org.

[3] This vision actually took place in two stages. Initially, these companions all joined in prayer together, but after their second failed attempt Martin Harris withdrew himself, “believing … that his presence was the cause of [their] not obtaining” the witness they desired. With Martin Harris departed, Joseph Smith, Oliver Cowdery, and David Whitmer jointly experienced the reported vision. Soon after this, Joseph Smith found Martin and joined him in prayer. It wasn’t long before Joseph Smith and Martin Harris experienced the same vision the other companions had witnessed. History, 1838–1856, volume A-1, p. 24–25, online at josephsmithpapers.org.

[6] For the prophetic promise that they would behold these items, see Doctrine and Covenant 17:1. For a discussion of these items’ evidentiary value, see Daniel C. Peterson, “Tangible Restoration: The Witnesses and What They Experienced,” 2006 FairMormon Conference presentation, 31–33, online at fairmormon.org.

[7] A few days afterwards, the Eight Witnesses handled the plates which were shown to them by Joseph Smith in Manchester, New York.

[8] Peterson, “Tangible Restoration,” 2. See also, Michael Hubbard MacKay and Gerrit J. Dirkmaat, From Darkness Unto Light: Joseph Smith’s Translation and Publication of the Book of Mormon (Salt Lake City and Provo, UT: Deseret Book and Religious Studies Center, Brigham Young University, 2015), 151: “Their written statement was included with the manuscript pages of the Book of Mormon and was eventually printed in the back of the published book in 1830.”

[24] For treatments of Nephi’s use of this ancient legal standard, see Bruce A. Van Orden, “The Law of Witnesses in 2 Nephi,” in The Book of Mormon: Second Nephi, The Doctrinal Structure, ed. Monte S. Nyman and Charles D. Tate Jr. (Provo, UT: Religious Studies Center, Brigham Young University, 1989), 307–321; Bruce A. Van Orden, “‘We Prophesy of Christ’: The Law of Witnesses in 2 Nephi,” Ensign, February 1990, online at lds.org.

[25] See John W. Welch, The Legal Cases in the Book of Mormon (Provo, UT: BYU Press and Neal A. Maxwell Institute for Religious Scholarship, 2008), 89–99 for a discussion of the role of witnesses in ancient Israelite judicial procedures.

[27] Joseph Smith taught that the Three Witnesses were essential elements in building the kingdom of heaven on the earth: “The kingdom of heaven is like unto leaven which a woman took and hid in three measures of meal, until the whole was leavened. It may be understood that the church of the Latter Day Saints, has taken its rise from a little leaven that was put into three witnesses. Behold, how much this is like the parable: it is fast leavening the lump, and will soon leaven the whole.” “Letter to the Elders of the Church, 30 November–1 December 1835,” p. 228, online at josephsmithpapers.org.

[32] With their lives at stake, David Whitmer, Oliver Cowdery, and Hiram Page stood firmly by their testimonies. See Mitchell K. Schaefer, “‘The Testimony of Men’: William E. McLellin and the Book of Mormon Witnesses,” BYU Studies 50, no. 1 (2011): 109.