Why Were Man and Woman Created in the Image of God? | Meridian Magazine 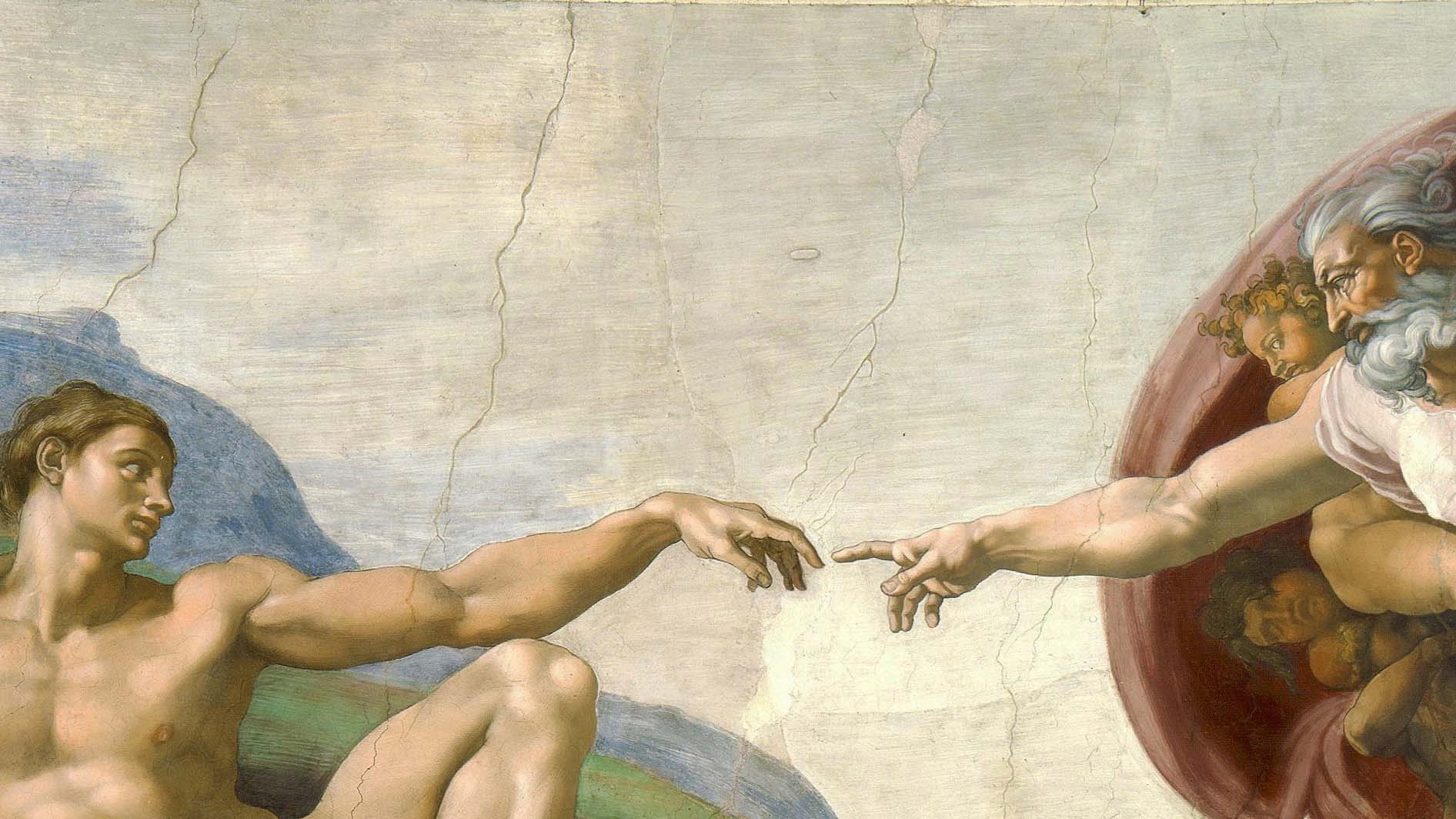 Why Were Man and Woman Created in the Image of God?

In the cosmic Creation account in Genesis 1, the culmination of God’s Creation is man and woman, who are created in God’s “image” (selem) and “likeness” (demut) (Genesis 1:26–27).1 For centuries, the Judeo-Christian tradition has wrestled with the theological implications of this statement since mainstream theology in both Jewish and Christian traditions portrays God as without body, parts, or passions—an unresponsive being, who cannot be influenced or acted upon.

For instance, one Jewish scholar reasoned that being in “the image of God” only entails a variety of abstract (non-physical) qualities: “all those faculties and gifts of character that distinguish man from the beast,” such as “intellect, free will, self-awareness, consciousness of the existence of others, conscience, responsibility, and self-control.”2 Similarly, a Christian scholar concluded that “it implies that it is those human characteristics that enable him to fulfill his duty of ruling the earth.”3 Neither scholar mentions or implies physical, bodily form as being part of God’s image.

Without denying that there are other factors at play, Restoration scripture makes clear that humanity’s status as the image of God includes a physical resemblance to deity. In Ether 3, the brother of Jared “saw the finger of the Lord; and it was as the finger of a man, like unto flesh and blood” (Ether 3:6). Because of his great faith, “the Lord showed himself unto him” (v. 13) and said:

Behold, I am Jesus Christ. … Seest thou that ye are created after mine own image? Yea, even all men were created in the beginning after mine own image. Behold, this body, which ye now behold, is the body of my spirit; and man have I created after the body of my spirit; and even as I appear unto thee to be in the spirit will I appear unto my people in the flesh. (Ether 3:14–16)

Genesis 5:1–3 echoes Genesis 1:26–27, stating “that God created man, in the likeness of God made he him; male and female created he them,” and then adding that Adam had “a son in his own likeness, after his image; and called his name Seth.” In the book of Moses, this is revised to explicitly refer to the bodily image of God:

In the day that God created man, in the likeness of God made he him; In the image of his own body, male and female, created he them. … And Adam lived one hundred and thirty years, and begat a son in his own likeness, after his own image, and called his name Seth. (Moses 6:8–10).

The Book of Mormon and the book of Moses were translated in 1829 and 1830, respectively.4 Thus, humanity’s physical resemblance to deity was one of the earliest truths restored in modern times—a truth which Joseph Smith himself surely understood even earlier thanks to his First Vision.5

These passages from Restoration scripture accurately reflect the understanding of God’s “image” and “likeness” from an ancient Near Eastern perspective.6 In recent years, biblical scholars have increasingly recognized that the human-like presentation of God in the Hebrew Bible is not intended to be read metaphorically.7 Specifically, several scholars have noted that man being in God’s “image” (selem) and “likeness” (demut) in Genesis 1:26–27 and 5:1–3 has a physical dimension to it—precisely as indicated in Restoration scripture.

[W]e note that humanity occupies a unique status in contrast with all the other created beings on the earth: being made in the image and according to the likeness of God. The basic likeness is in physical appearance, as the study of the etymology and usage of both terms shows. … These terms are used in cognate languages of statues representing gods and humans in contemporary inscriptions, and certainly the intention is to say that God and man share a common physical appearance.8

Similarly, after quoting Genesis 1:27, Charles Halton states, “It seems pretty straightforward that if God created humans in the divine image then God must look like a human.”9 Benjamin Sommer likewise states, “The terms used in Genesis 1:26–27, demut and selem, … pertain specifically to the physical contours of God. This becomes especially clear when one views the terms in their ancient Semitic context. They are used to refer to visible, concrete representations of physical objects … [and] there is no evidence suggesting we should read these terms as somehow metaphorical and abstract.”10

Both ancient Jews and early Christians recognized the biblical description of God’s “image” as being like that of man, and they took such descriptions literally.11 Theologian David L. Paulsen has shown that it was only after Christianity and Judaism became influenced by Greek philosophical metaphysics that such interpretations changed.12

The clear implication of humanity—both male and female—being created in God’s image is that all men and women are the offspring of God. Halton argues, citing Genesis 5:1–3, “We look like the divine because we are God’s offspring.”14 Prophets and apostles and other servants of the Lord have repeatedly taught the importance of this solemn truth. For instance, President Hugh B. Brown taught:

For us, God is not an abstraction. He is not an idea, a metaphysical principle, an impersonal force or power. He is a concrete, living person. And though in our human frailty we cannot know the total mystery of his being, we know that he is akin to us, … and he is, in fact, our Father. … We reaffirm the doctrine of the ancient scripture and of all the prophets that asserts that man was created in the image of God and that God possessed such human qualities as consciousness, will, love, mercy, justice. In other words, he is an exalted, perfected, and glorified Being.15

This proper understanding of God makes each individual’s relationship with God intimate and personal. It also promotes an ennobling view of men and women everywhere. In the ancient Near Eastern context, the “image of God” (or the gods) was commonly thought to be invested in royalty, but Genesis extends this royal concept to all of humanity.16

Furthermore, God commanded the Israelites not to make any graven images of God to bow down and worship (see Exodus 20:3–4; Deuteronomy 4:15–19), at least partially because rather than “dumb idols” (Habakkuk 2:8), God’s true image is manifest in living, breathing persons.17 This means, every human being deserves to be treated with dignity and respect as children of God and reflections of his image and likeness. As President Joseph Fielding Smith taught,

The God we worship is a glorified Being in whom all power and perfection dwell, and he has created man in his own image and likeness (Gen. 1:26–27), with those characteristics and attributes which he himself possesses. And so our belief in the dignity and destiny of [humankind] is an essential part both of our theology and of our way of life. It is the very basis of our Lord’s teaching that “the first and great commandment” is: “Thou shalt love the Lord thy God with all thy heart, and with all thy soul, and with all thy mind”; and that the second great commandment is: “Thou shalt love thy neighbour as thyself” (Matt. 22:37–39).18

5.For a more complete discussion of the embodiment of God in the earliest stages of the Restoration, see David L. Paulsen, “The Doctrine of Divine Embodiment: Restoration, Judeo-Christian, and Philosophical Perspectives,” BYU Studies Quarterly 35, no. 4 (1995–1996): 9–39. See also Terryl L. Givens, Wrestling the Angel: The Foundations of Mormon Thought—Cosmos, God, Humanity (New York, NY: Oxford University Press, 2015), 89–95. On what Joseph would have known about God’s body after the First Vision, see John W. Welch, “When Did Joseph Smith Know that the Father and the Son Have Bodies as Tangible as Man’s?,” BYU Studies Quarterly 59 no. 2 (2020): 298–310.

13.Joseph Smith, Discourse, 7 April 1844, as reported in the Times and Seasons, August 15, 1844, 5:613, online at josephsmithpapers.org. This stands in contrast to Halton, Human-Shaped God, 18–22, in which Halton, despite correctly arguing that God is embodied, nonetheless asserts that “an accurate understanding of God is not of utmost importance” (p. 18).

15.Hugh B. Brown, “The Gospel Is for All Men,” April 1969 general conference, online at scripture.byu.edu.

17.See Sommer, Bodies of God, 70. Cathrine L. McDowell, The Image of God in the Garden of Eden: The Creation of Humankind in Genesis 2:5–3:24 in Light of the mīs pî pīt pî and wpt-r Rituals of Mesopotamia and Ancient Egypt (Winona Lake, IN: Eisenbrauns, 2015), argues that Genesis 1–3 presents the creation of humanity in a way that imitates the rituals surrounding the creation of idols in Mesopotamia and Egypt, thus implying that human beings stand in the place of statutes as the true image of God. See also Catherine McDowell, “Human Identity and Purpose Redefined: Gen 1:26–28 and 2:5–25 in Context,” Advances in Ancient Biblical and Near Eastern Research 1, no. 3 (2021): 29–44. Cf. Sommer, Bodies of God, 19–24.

18.Joseph Fielding Smith, “Our Concern for All Our Father’s Children,” April 1970 general conference, online at scripture.byu.edu.

I think we need to start mentioning the possibility of Heavenly Mother in these types of articles and discussions.