Why Was the Zoramite Defection So Disastrous? | Meridian Magazine 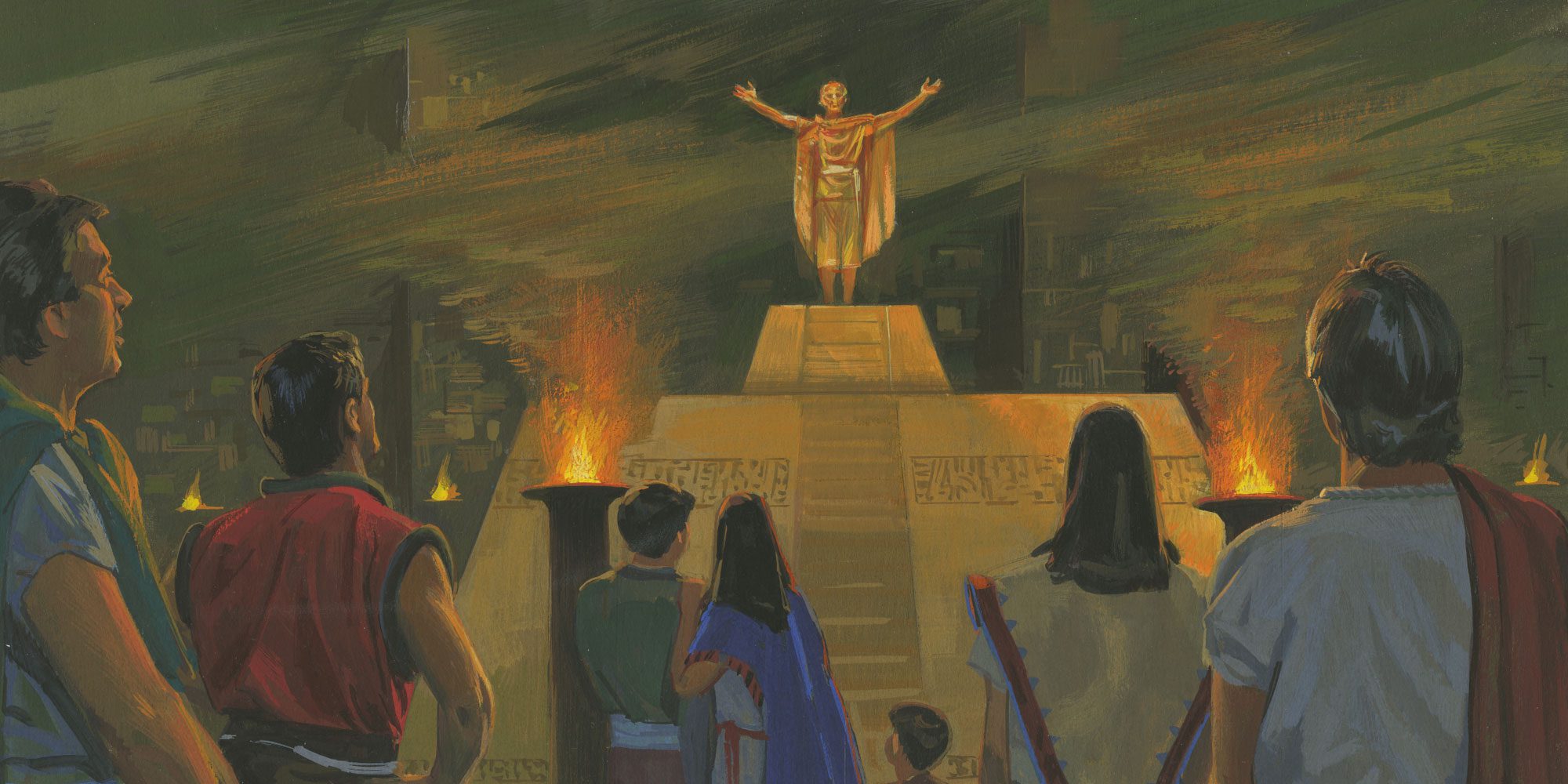 Why Was the Zoramite Defection So Disastrous?

And thus the Zoramites and the Lamanites began to make preparations for war against the people of Ammon, and also against the Nephites.

(Alma 31:1, 7). Yet despite efforts to reclaim these apostates, the Zoramites “cast out of the land” any who believed in the words of Alma and Amulek (Alma 35:6). The Zoramite problem immediately escalated into a series of all-out wars in the land of Zarahemla.

When the people of Ammon took in these exiled believers, the Zoramites stirred up the Lamanites to anger, and together they made “preparations for war against the people of Ammon, and also against the Nephites” (Alma 35:11). While Alma and the Nephites “greatly feared that the Zoramites would enter into a correspondence with the Lamanites, and that it would be the means for a great loss on the part of the Nephites” (Alma 31:4), the Zoramites clearly felt threatened by the missionary effort of Alma and his companions, “for it did destroy their craft” (Alma 35:3). As Brant Gardner has aptly explained:

Ultimately, the Zoramite defection was a major catalyst for seven years of armed conflicts between the Nephites and the Lamanites often referred to as the war chapters in the book of Alma.[5] Those wars were led by Amalickiah and his brother Ammoron and their chief captains, all of whom were Zoramites (Alma 48:5; Alma 54:23).

Geographic clues within the Book of Mormon can help readers understand why this turn of events was so disastrous. The “Zoramites had gathered themselves together in a land which they called Antionum, which was east of the land of Zarahemla, which lay nearly bordering upon the seashore” (Alma 31:3). With a Lamanite presence already in the south and west (Alma 22:28), this development led to the Nephites being precariously situated between two major Lamanite forces.[6]

Such a state of affairs is not without scriptural precedent. During Lehi’s time, Israelite leaders failed to heed the words of the prophets, and in consequence were geographically and politically caught between two major world powers—the Egyptians to the south and the Babylonians to the north. Acting out of fear, and in direct defiance of Jeremiah’s prophetic counsel, King Zedekiah chose to ally Israel with Egypt.[7] This poor decision eventually led to a Babylonian invasion, which ended with Zedekiah being exiled into Babylon after the execution of his family.[8]

Like the kingdom of Judah in Lehi’s time, the Nephites were vulnerable to enemy incursions on two separate fronts. Understanding the high stakes that were involved in this situation—meaning both the worth of souls among the Zoramites as well as the need to maintain them as military allies—can help readers better empathize with Alma’s great sorrow after the Zoramites rejected his message:

Now Alma, being grieved for the iniquity of his people, yea for the wars, and the bloodsheds, and the contentions which were among them; and having been to declare the word, or sent to declare the word, among all the people in every city; and seeing that the hearts of the people began to wax hard, and that they began to be offended because of the strictness of the word, his heart was exceedingly sorrowful (Alma 35:15).

This episode also demonstrates the relationship between a society’s political well-being and the degree of heed it gives to the words of the prophets. As the military conflicts unfold in the Book of Mormon, it becomes increasingly clear that the greatest threat to the Nephite civilization was internal wickedness and dissension, rather than external enemies. In an editorial comment, Mormon later emphasized that it was Captain Moroni’s “first care to put an end to such contentions and dissensions among the people; for behold, this had been hitherto a cause of all their destruction” (Alma 51:16).

Such a pointed statement should serve as a strong word of caution to modern societies fraught with their own competing social interests and political intrigues. Social justice can only be achieved when all people respect one another’s rights of religious liberty and mutual dignity, and Zion can only be achieved when faithful people unitedly heed the words of God’s true messengers. Although missionary efforts are not always successful, modern readers are, like Alma, still obligated to “try the virtue of the word of God” because “it [has] more powerful effect upon the minds of the people than the sword, or anything else” (Alma 31:5).

[1] The Book of Mormon first mentions the Zoramites as a distinct group in Jacob 1:13. In this early instance, the Zoramites seem to be those who are lineally descended from Zoram, who was once a servant to Laban. The next mention of the Zoramites is Alma 30:59, which describes them as a group who had “separated themselves from the Nephites and called themselves Zoramites, being led by a man whose name was Zoram.” Ammaron specifically mentioned that he was a “descendent of Zoram” (Alma 54:23), which strongly suggests there was a familial link between the early and later Zoramite groups. For further discussion about Zoramite origins, see John A. Tvedtnes “Book of Mormon Tribal Affiliation and Military Castes,” in Warfare in the Book of Mormon, ed. Stephen D. Ricks and William J. Hamblin (Salt Lake City and Provo, UT: Deseret Book and FARMS, 1990), 305–306; Sherrie Mills Johnson, “The Zoramite Separation: A Sociological Perspective,” Journal of Book of Mormon Studies 14, no. 1 (2005): 76.

[5] The Zoramites played a significant role in three major military conflicts: the battle with Zerahemnah and the two Amalickiahite wars. For details concerning these conflicts, see John W. Welch and J. Gregory Welch, Charting the Book of Mormon, (Provo, UT: FARMS, 2007), chart 137, wars 6–8. For a more complete discussion about the role of apostate groups in the Book of Mormon, see J. Christopher Conkling, “Alma’s Enemies: The Case of the Lamanites, Amlicites, and Mysterious Amalekites,” Journal of Book of Mormon Studies 14, no. 1 (2005): 115–117.

[6] For a more detailed commentary on the Lamanites’ military offensive in this region, see Gardner, Second Witness, 4:566–568. Earlier in the text, Mormon provided geographical information to help readers better understand the logistics of the battles that would be discussed in following chapters. See Book of Mormon Central, “Why Did Mormon Give So Many Details About Geography? (Alma 22:32),” KnoWhy 130 (June 27, 2016). One statement, in particular, helps readers recognize a major goal of the Nephites’ military strategy: “And it came to pass that the Nephites had inhabited the land Bountiful, even from the east unto the west sea, and thus the Nephites in their wisdom, with their guards and their armies, had hemmed in the Lamanites on the south, that thereby they should have no more possession on the north, that they might not overrun the land northward” (Alma 22:33). The Zoramite defection, therefore, posed a serious threat to the Nephites because the land of Antionum (where the Zoramites resided) bordered the land of Jershon (see Alma 31:3; 43:15; 43:22), and Jershon seemed to be a strategic military route into the northern land of Bountiful (Alma 27:22). For an example of how the Lamanites intentionally took advantage of multiple military fronts, see Alma 52:10–14.

"This episode also demonstrates the relationship between a society’s political well-being and the degree of heed it gives to the words of the prophets." A timely observation in light of the current events in Russia as it relates to missionary work and the spreading of the gospel, which is Russia's only salvation. And ours also.