Why Was the Nauvoo City Charter Important for Protecting the Saints? | Meridian Magazine 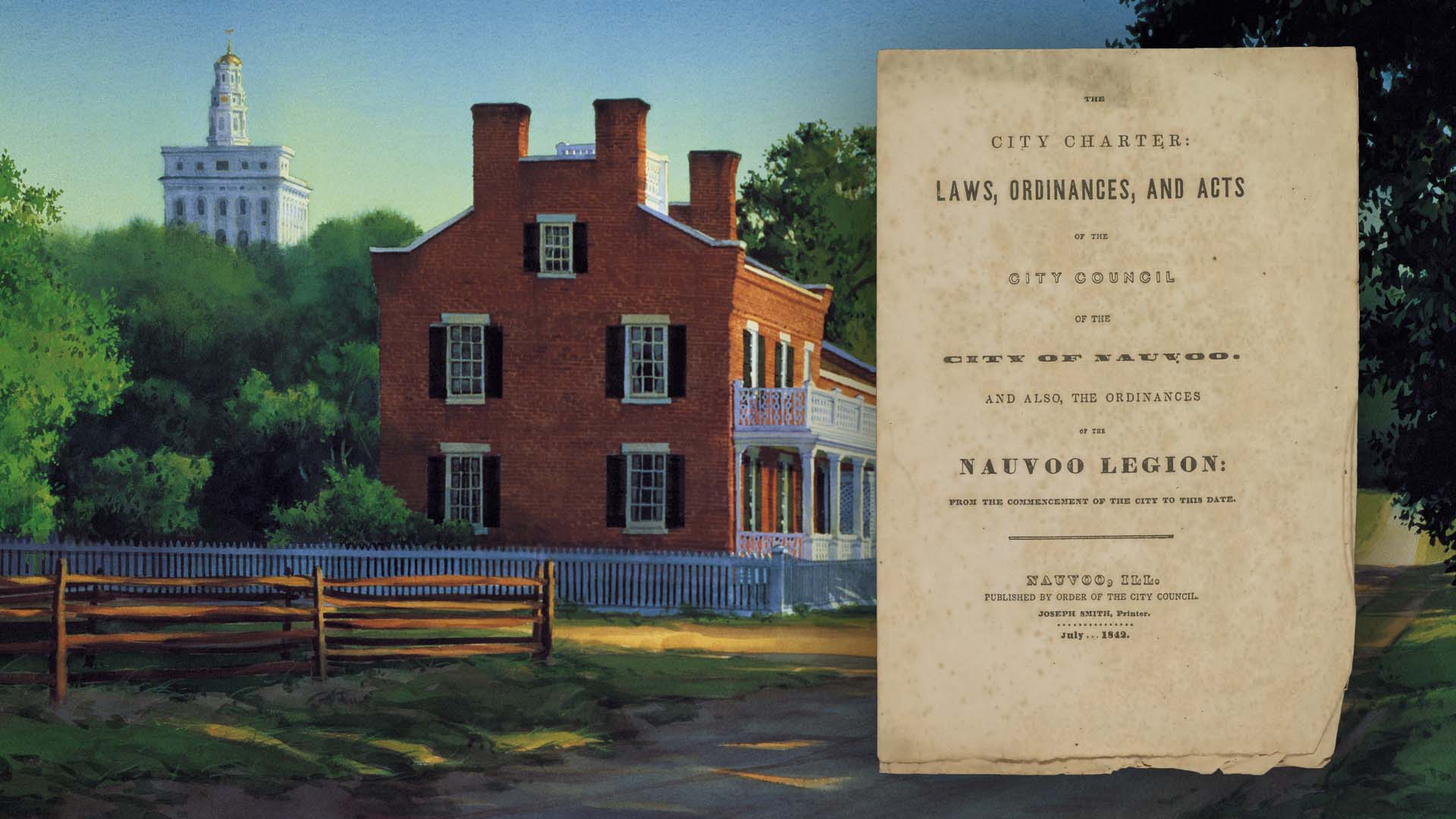 Why Was the Nauvoo City Charter Important for Protecting the Saints?

“We believe that governments were instituted of God for the benefit of man.” Doctrine and Covenants 134:1

By 1839, many early members of The Church of Jesus Christ of Latter-day Saints had been forcibly driven from their homes in both Ohio and Missouri. They sought refuge first in Quincy, Illinois, and then began to establish their own settlement in the area around Commerce, Illinois (later renamed Nauvoo). By this time, the Saints felt that local officials in Ohio and Missouri had not sufficiently protected their rights—and had in some cases actually colluded with their persecutors. Furthermore, county militias had been used to drive them from their homes. Thus, as the Saints began to build Nauvoo, they wanted the opportunity to protect and govern themselves.

Historian Milton V. Backman Jr. explained, “Partly because of this persecution, Latter-day Saints who settled Nauvoo were suspicious of some political leaders, bodies of government and local militias. They were keenly interested in governing themselves (without outside interference) and establishing a militia that could defend members from mobsters.”1 To achieve this goal, Joseph Smith and other important leaders set out to establish a city charter that would grant them the ability to create their own local laws and raise their own militia to enforce those laws and protect Nauvoo’s citizens.2

The proposed charter quickly passed through the Illinois state legislature in December 1840, passing its final review by the Council of Revision on December 17, because Illinois legislators wanted to promote growth and settlement in the state. It went into effect February 1, 1841.3

In many respects, the Nauvoo city charter reflected the typical language used in such charters in Illinois in the 1830s to 1840s, especially after the 1837 charter of Springfield (the capital of Illinois).4 “More than 80 percent of its provisions closely followed franchises authorized for other Illinois cities,” observed Glen M. Leonard.5 Yet this did not mean the charter was not of immense significance for a people who had been denied many basic rights. As James L. Kimball explained:

The passage of the Charter of Nauvoo gave the budding city “a government within a government.” With this charter, the Saints possessed a city government whose ordinances … needed only to be “not repugnant to the Constitution of United States or [the constitution] of this State [of Illinois].” Not mentioned is any need to conform with other state laws or county regulations.6

Other Illinois city charters had similar language, which meant, as Leonard explained, “these city councils could pass ordinances that contradicted state law, as long as those ordinances did not conflict with the state or national constitution.”7 Thus, as one historian recently put it, “to casual readers, the charter mostly reflected boilerplate city governance; to Mormons, it granted them the political sovereignty they had long coveted.”8

Notably, the Nauvoo city charter allowed the city such rights and powers as to form its own independent militia, to sponsor a university, to abate conduct deemed to be a public nuisance, to form a municipal court system with power to grant writs of habeas corpus, and to pass local marriage laws. While precedent had been set for most of these powers in other city charters, Nauvoo’s charter was the strongest and most complete of the charters granted by the state of Illinois. All of these powers—and many others—proved useful to the Saints in making the city of Nauvoo a protected place of independence, religious worship, and self-governance.

Reviewing the provisions of the charter, it is not hard to see why Latter-day Saints interpreted and applied it eagerly as a means of protecting themselves and others from further abuse. Several of the rights granted in the charter were the very rights that had been trampled on as the Saints were driven from Missouri.

For instance, section 3 of the charter guaranteed that “inhabitants of said city … shall have power to … purchase, receive and hold property” as well as “sell, lease, convey or dispose of property” and “improve and protect such property.” The same section granted Nauvoo citizens the rights “to sue and be sued, plead and be impleaded, defend and be defended, in all courts of law and equity.”9 After being robbed of their property, driven from their homes, and denied legal recourse in Missouri,10 such provisions likely felt especially reassuring to the Saints.

Another important provision was in section 25, which authorized the Nauvoo city council to organize a militia, called the “Nauvoo Legion.”11 This provision was somewhat unusual since volunteer militia companies “were generally organized on a county rather than a city level.”12 It was not totally without precedent, however, because the Illinois state legislature had previously granted a charter to the city of Fairfield to organize an independent militia company, called the “Invincible Dragoons.”13 Thus, according to Kimball, “[the Nauvoo Legion] section of the charter was not Mormon at all but had its origins in an act passed before the Saints migrated to Illinois.”14

In Missouri, various county militias failed to protect the Saints’ rights, even after being promised the militias’ assistance. Often the mobs driving the Saints from their homes were composed of members of the local militia. Thus, it is not surprising that the Saints wanted this unusual, though not totally unprecedented, right to defend themselves with their own militia. In effect, the charter enabled the citizens of Nauvoo to raise a “military body [that] was free from state jurisdiction,”15 which assured the Saints they would have the right to defend themselves.

Sections 16 and 17 of the Nauvoo charter further allowed the city to form a municipal court, with elected city officials serving as justices of the peace.17 Importantly, the charter granted this municipal court “power to grant writs of habeas corpus in all cases arising under the ordinances of the city council.”17 Once again, there was precedent for these provisions in previous city charters,18 but that does not underscore the significance this held for the Saints. After the abuses of legal procedure and failure of the courts to protect their rights—including denial of habeas corpus—in Missouri, these provisions of the Nauvoo charter enabled the Saints “to seek action in courts that were sympathetic to the cause of Zion.”19

Overall, the Saints understood the charter as “an unbreachable wall defending the rights of Zion.”20 James L. Kimball Jr. explained, “The broad provisions of the Nauvoo Charter were intended to enable the Mormons to establish a peaceful sanctuary, free from the kinds of violence and harassments they had experienced at the hands of Missouri officials.”21

8.Benjamin E. Park, Kingdom of Nauvoo: The Rise and Fall of a Religious Empire on the American Frontier (New York, NY: Liveright Publishing, 2020), 55.