Why Was Korihor Cursed with Speechlessness? | Meridian Magazine 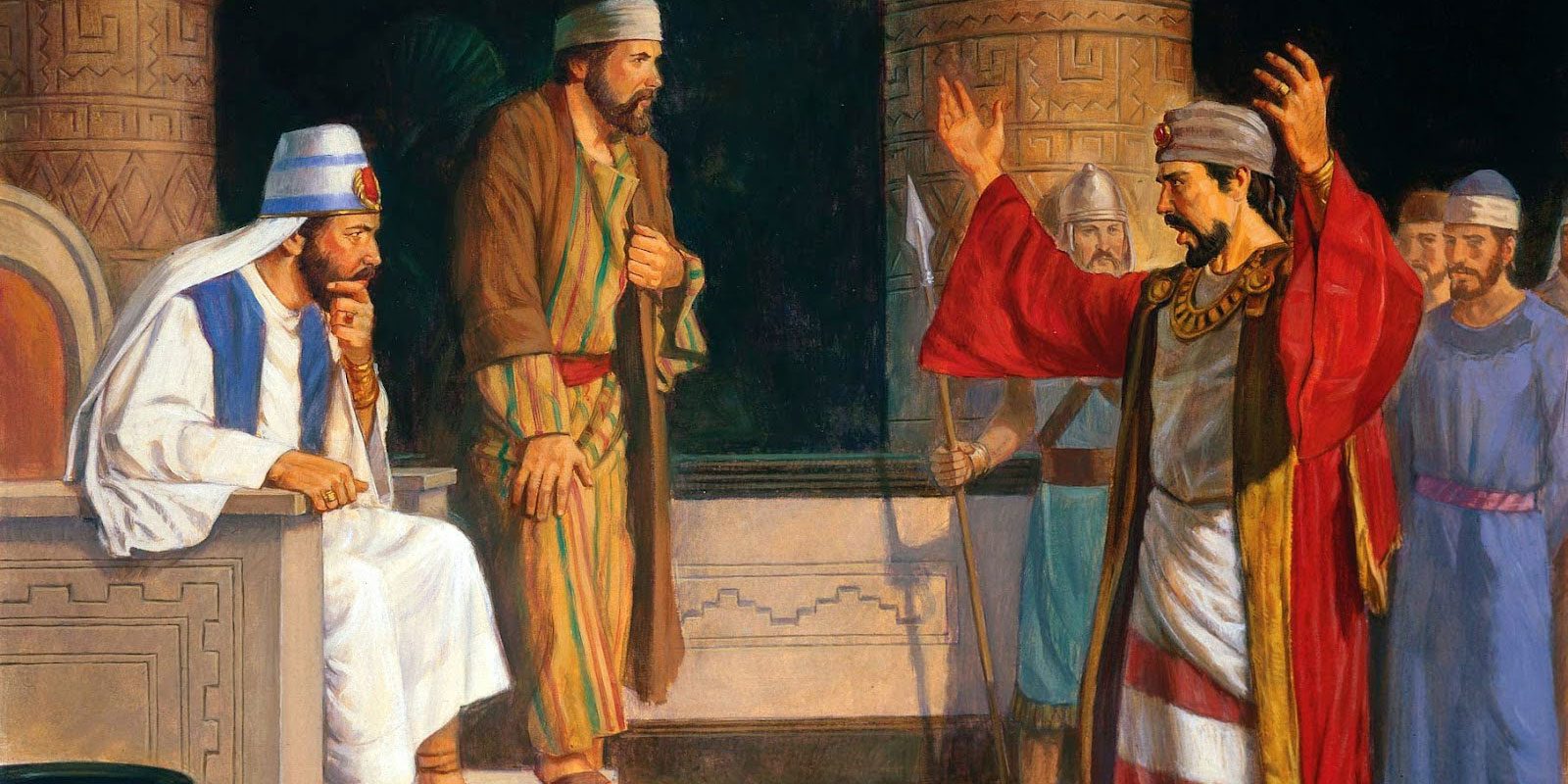 Why Was Korihor Cursed with Speechlessness?

“Now when Alma had said these words, Korihor was struck dumb, that he could not have utterance, according to the words of Alma” Alma 30:50

At the end of the seventeenth year of the reign of the judges (approximately 75 BC), there arose an anti-Christ named Korihor, who “began to preach unto the people against the prophecies which had been spoken by the prophets, concerning the coming of Christ” (Alma 30:6). Mosiah’s reforms determined that “there was no law against a man’s belief; for it was strictly contrary to the commands of God that there should be a law which should bring men on to unequal grounds” (v. 7). However, the situation with Korihor was unique. Much like the case involving Nehor (Alma 1),[1] the problems involving Korihor’s case raised important questions in Nephite jurisprudence.

Did equality mean that a person could not only believe whatever he wanted but also say whatever he wanted? If a person did not believe that Jehovah was God, could he be punished for profaning the name of Jehovah or speaking insolently against him? In other words, did freedom of belief (or disbelief) entail freedom of expression specifically articulating or reflecting that belief? This important question had been neither contemplated nor addressed in the law originally established by King Mosiah a generation earlier.[2]

Because of the seriousness of these issues, Korihor was eventually brought to stand trial before Alma and the Nephite chief judge (Alma 30:29). In the course of their verbal sparring, Korihor, who denied the existence of God,[3] demanded of Alma, “If thou wilt show me a sign, that I may be convinced that there is a God, yea, show unto me that he hath power, and then will I be convinced of the truth of thy words” (v. 43).

This unmistakable display of divine power compelled Korihor into confessing his errors and humbling himself to some extent before God (Alma 30:51–54). His confession, however, was incomplete, and his promise of good future behavior was evasive. Despite begging for the curse to be lifted, Korihor was dismissed and “cast out,” or shunned in Zarahemla. Thus reduced to begging, he soon went to Antionum and there, among the Zoramites, he was somehow trampled to death (vv. 56, 58–59).

Korihor was shown a sign because he challenged Alma to prove the existence of God: “If you wilt show me a sign, that I may be convinced that there is a God, yea, show unto me that he hath power” (Alma 30:43). Being willing to undergo an ordeal was often seen in ancient trials, when the parties had reached a point of stalemate.[4] Being the defendant, Korihor would have seen any failure by Alma to produce compelling evidence as a vindication of Korihor’s entire case.

That Korihor was cursed with speechlessness is shocking enough. That the curse remained upon him even after he acknowledged his error might be even more difficult for modern readers to countenance. But, the chief judge had asked Korihor to answer four questions following the cursing (Alma 30:51), and Korihor responded half-heartedly to only parts of them. Korihor then turned to Alma and asked him to pray to God to remove the curse (v. 54).

Perhaps anticipating objections to this outcome among those who had admired Korihor, Alma explained that “if this curse should be taken from thee thou wouldst again lead away the hearts of this people; therefore, it shall be unto thee even as the Lord will” (Alma 30:55). With justifiable precautionary reasons, Alma declined to petition God to change this outcome, and the curse remained on Korihor.

Korihor’s specific affliction also makes sense when read in the light of ancient religious and legal practices. As explained by John W. Welch, “The speechlessness of Korihor . . . was precisely the kind of sign or restraint that people in the ancient world expected a god to manifest in a judicial setting, especially in the face of false accusations.”[5] This is confirmed by the recovery of numerous ancient spells that deliberately aimed to invoke the divine curse of speechlessness on revilers and blasphemers (which Korihor clearly was).

While the use of such a curse may seem somewhat unusual or sensational to modern readers, the pronouncing of curses or spells was common in the ancient Mediterranean world, and their most frequent use was in fact in the legal sphere. In recent decades more than one hundred Greek and Latin “binding spells”—curses inscribed on small lead sheets that were folded up and pierced through with a nail—have been recovered from tombs, temples, and especially wells near the law courts, where they were placed in hopes that a deity from the underworld would receive them.[6]

Korihor’s punishment, it appears, was in line with ancient legal procedure for cases such as this. Welch therefore sees this outcome as “a good example of divinely executed talionic justice: his curse befits his crime.” Indeed, Korihor’s punishment was fully suitable: “Because he had spoken evil, he was punished by being made unable to speak.”[7]

With all this contextual information in mind, readers can appreciate Mormon’s concluding thoughts on the pitiful outcome of Korihor’s case. With his penchant for moralizing on important incidents in Nephite history, Mormon effectively summarized, “And thus we see the end of him who perverteth the ways of the Lord; and thus we see that the devil will not support his children at the last day, but doth speedily drag them down to hell” (Alma 30:60).

John W. Welch, The Legal Cases in the Book of Mormon (Provo, UT: Brigham Young University Press and the Neal A. Maxwell Institute for Religious Scholarship, 2008), 273–300.

Gerald N. Lund, “An Anti-Christ in the Book of Mormon—The Face May Be Strange, but the Voice Is Familiar,” in The Book of Mormon: Alma, the Testimony of the Word, ed. Monte S. Nyman and Charles D. Tate Jr. (Provo, UT: Religious Studies Center, Brigham Young University, 1992), 107–128.

[2] John W. Welch, The Legal Cases in the Book of Mormon (Provo, UT: Brigham Young University Press and the Neal A. Maxwell Institute for Religious Scholarship, 2008), 274. Welch, Legal Cases, 277, has specifically drawn a connection between the cases of Nehor and Korihor: “Indeed, it appears that Korihor’s case, like Nehor’s case, raised some legal issues that arose for the first time in interpreting the meaning of the law of Mosiah. For example, who was to have jurisdiction over cases of false preaching and blasphemy—the chief judge or the high priest? Was unruly or erroneous speech ever to be punishable under the new law, or could a person only be punished for his overt actions? Without prior experience to direct the judgment of the court, these questions became an issue of first impression for the highest courts in Gideon and Zarahemla.”

[3] Korihor’s denial of God’s existence should not be quickly equated with the modern form of atheism that arose largely during the Enlightenment. Whereas atheism today denies the existence of any divine or supernatural being, Korihor affirmed the existence of Satan and angels (Alma 30:53). Instead, while it has overlaps with modern atheism, Korihor’s unique version of atheism should be understood as denying the operative power of God in mortal affairs, a denial of God’s revelations to prophets, the denial of Christ’s coming and atonement, a purely humanistic ethic, and the reduction of spiritual witnesses to “the effects of a frenzied mind” (Alma 30:13–17). In short, Korihor’s was a functional or behavioral atheism that denied God’s involvement in human affairs, not a purely intellectual one that denied his existence altogether.

[6] Welch, Legal Cases, 290. Interestingly, an ancient Hittite text spells out curses of blindness and deafness for anyone who speaks evil against the king. “Who takes part in evil against the king and queen, may the oath deities seize him. . . . May they b[li]nd him like the blind man. May they d[eaf]en him like the deaf man. And may they utt[erly] destroy him, a mortal, together with his wives, his sons, and his clan.” Billie Jean Collins, trans., “The First Soldiers’ Oath,” in The Context of Scripture: Volume I, Canonical Compositions from the Biblical World, ed. William W. Hallo (Leiden: Brill, 2003), 166. This may parallel Korihor’s situation, as Korihor was cursed in a similar manner after speaking against the King of Kings.