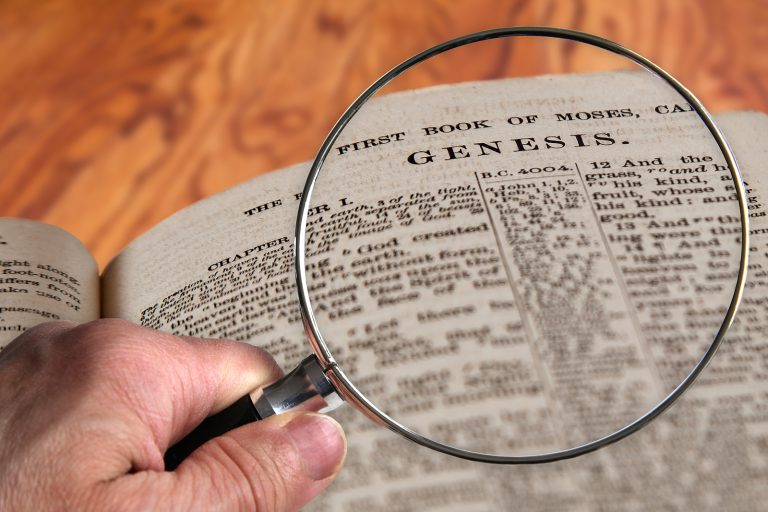 Beginning in January, the worldwide Sunday School and home Sunday curriculum for the Church of Jesus Christ of Latter-day Saints—“Come, Follow Me”—turned to the Hebrew Bible or, as Latter-day Saints and other Christians typically refer to it, the Old Testament.

Why? Why bother? Isn’t the Hebrew Bible sometimes difficult to understand? Isn’t it full of tribalism and violence? Isn’t its depiction of God a vengeful and narrow one, unlike the loving Father in whom we believe?  And aren’t the detailed rules and regulations of the Old Testament mostly irrelevant to Christian life today?

I think it’s fair to say that, for these and other reasons, many Latter-day Saints would not consider the Old Testament their favorite book of scripture.  They wouldn’t look to it as their first source of spiritual guidance and inspiration.  Not a few teachers and students in the Church—I’ve heard them myself—approached this curriculum year with at least some reluctance and lack of enthusiasm, if not outright fear and trepidation.

Although even a little bit of preparation can overcome many obstacles, such objections have some merit. The complex ritual and legal instructions of Leviticus and the minute description in Exodus 25-31 and 35-40 of the ancient Israelite tabernacle have little if any direct application in the lives of modern Latter-day Saints.  And, frankly, the Old Testament’s account of the conquest of Canaan by the Israelites makes for some occasionally very hard reading.

But the Old Testament is rich nonetheless, and well worth studying. Even apart from its religious significance, for one thing, it is foundational to much of the culture of the west—to its art, music, literature, politics, and philosophy. Dante’s “Divine Comedy,” Milton’s “Paradise Lost,” Michelangelo’s “David” and his Sistine Ceiling, Mendelssohn’s “Elijah,” the writings of the Puritans, and hundreds of other vital artifacts of western civilization are incomprehensible apart from some knowledge of the Hebrew Bible. The famous Ten Commandments that were given to Moses on Mount Sinai (Exodus 20:1-17) are of fundamental significance to western law and morality.

Thomas Hobbes’s classic 1651 treatise “Leviathan,” generally considered one of the principal works of modern political philosophy, argues for the necessity of a strong, unified government headed by a sovereign with absolute power.  Published at the end of the brutal English Civil War (1642-1651), it was plainly inspired to some extent by the near-anarchy of that time.  But its title comes from the biblical “leviathan,” an enormous mythological creature from a Canaanite and Mesopotamian background—probably a sea serpent—that is mentioned in Job 3:8; 40:15-41:26; Psalm 74:14; 104:26; and Isaiah 27:1.

But people who opposed all-powerful kings also appealed to biblical imagery.  For example, the first proposed design for the “Great Seal” of the newly formed United States of America, as suggested by Benjamin Franklin and then modified by Thomas Jefferson, drew directly upon the same powerful biblical imagery that underlies the annual Jewish celebration of Passover:

“Pharaoh sitting in an open Chariot, a Crown on his head and a Sword in his hand, passing through the divided Waters of the Red Sea in Pursuit of the Israelites: Rays from a Pillar of Fire in the Cloud, expressive of the divine Presence and Command, beaming on Moses who stands on the shore and extending his hand over the Sea causes it to overwhelm Pharaoh. Motto: Rebellion to Tyrants is Obedience to God.”

More than just a cultural treasure trove of iconic images, however, the Old Testament is sacred scripture—and not only for Jews.  (For that matter, the Qur’an, the holy book of Islam, echoes, amplifies, and comments upon many of the stories that appear, earlier, in the scripture of the Jews.)

It’s true that Christian appreciation of the Hebrew Bible has varied widely over time.  The important second-century heretic Marcion, for instance, represents an extreme position; he rejected not only the Old Testament itself but the God of the Old Testament, insisting that the father of Jesus was an altogether different deity than that of the Hebrew prophets.  Marcion was eventually denounced as a heretic and excommunicated, but many Christians in later centuries have come dangerously close to espousing a kind of pop-Marcionism, carrying Bibles about with them that consist of only the New Testament and the Psalms and effectively—and sometimes rather explicitly—overlooking the Jewishness of Jesus.  (This was taken to a lethal extreme by some Christian scholars and theologians in Germany and Austria under the Nazi Third Reich, who contended that Jesus was an “Aryan” and not actually Jewish at all.)

However, dispensing with the Hebrew Bible is not an option available to the Latter-day Saints, whose keynote scripture, the Book of Mormon, bridges the era of the Old Testament and that of the New, quoting extensively from such ancient prophets as Isaiah and Malachi as well as from the resurrected Jesus during his visit to the New World.  The Book of Mormon effectively links the two testaments together, erasing the commonly accepted division between them and suggesting, in fact, that the boundary dividing one from the other is artificial and rather insignificant.

Yes, organizational charts of The Church of Jesus Christ of Latter-day Saints feature apostles like those of the New Testament, its weekly worship services center on the sacrament of the Lord’s supper, and its teachings revolve around the atonement of Jesus Christ.  But we mustn’t forget that the concepts of atonement and sacrificial offering—and the origin of the sacrament in the Last Supper, which was itself a Passover meal—are themselves deeply rooted in the Hebrew Bible, and that the officers of the Church also include prophets and priests and high priests and patriarchs, and holders of the priesthoods of Aaron and Melchizedek.  The Saints worship in temples and tabernacles, and the covenant of Abraham (Genesis 17; 22:15-18; Doctrine and Covenants 132:29-50; Galatians 3; Abraham 2) remains essential to our lives and our doctrine.

Early members of The Church of Jesus Christ of Latter-day Saints were saturated with the entire Bible, not merely the New Testament, which is why they sought to build “Zion.”  It’s also why Utah is studded with place names like Moab, Enoch, Eden, Ephraim, Salem, Zion, and Mount Nebo. When the pioneers (sometimes called “the Camp of Israel”) had crossed the Mississippi River, they were fed by what seemed a miraculous flock of quails, reminiscent of those that fed the hungry Israelites in Exodus 16 and Numbers 11.  When the Saints arrived in the Great Basin of the American West under the leadership of Brigham Young (sometimes called “the American Moses”) and found a stream flowing from a freshwater lake into a salty dead sea, it was absolutely natural for them to remember the topography of the Israelites’ Promised Land and to name it the Jordan River.  Early Latter-day Saint history cannot be fully understood apart from the Old Testament—nor even, specifically, apart from the book of Isaiah, which is cited throughout the Doctrine and Covenants.

Nor can the Book of Mormon be understood without the Hebrew Bible. When Lehi sent his sons to fetch the brass plates of Laban, putting their lives at risk in doing so, he was essentially in quest of a text of the Old Testament (see 1 Nephi 3-5). This was the only scripture known to the first Nephites, and Isaiah is the prophet whom they most often quote in their own writings.  (He was also popular among those who created the famous Dead Sea Scrolls at Qumran.)  “My soul delighteth in the words of Isaiah,” said the prophet Nephi (2 Nephi 25:5).  “Great are the words of Isaiah,” exclaimed an even greater authority (3 Nephi 23:1).

The Hebrew Bible was the only scripture of the first Old World Christians, too. It was the only scriptural text known to the mortal Jesus, to those who heard him preach, and to the first leaders of his ancient church. The Psalms were the first Christian hymnal. The New Testament cites Isaiah many times, and Matthew’s gospel repeatedly seeks to demonstrate that Jesus—a descendent of the Old Testament’s King David—fulfills the predictions of Israel’s prophets. When Jesus comments of his critics that they study the scriptures diligently because, in them, they think they have eternal life (John 5:39), he is plainly referring to the Old Testament: The scriptures, he says, “are they which testify of me.”

Likewise, when Paul reminds Timothy that “from a child thou hast known the holy scriptures, which are able to make thee wise unto salvation through faith which is in Christ Jesus . . . perfect, thoroughly furnished unto all good works” (2 Timothy 3:15, 17), he can only be referring to the Hebrew Bible (though probably in its Greek Septuagint translation) since the New Testament didn’t yet exist—and it certainly hadn’t been available when Timothy was a child. (Some critics of the Restoration have sought to exploit this passage against the Latter-day Saints, arguing that, since the scriptures young Timothy had known were sufficient by themselves for his salvation, the Book of Mormon is unnecessary.  They apparently fail to notice that the logic of their argument would also render the New Testament itself superfluous.)

I’m guessing that a good many Latter-day Saints resolved to make a serious effort in the new year of 2022 to keep up fully with the readings for “Come, Follow Me.” Now, though, that we’re beginning to get into the year and to leave the familiar stories of Genesis and the Exodus behind, it might be an appropriate time to renew that New Year’s resolution.  Have some of us already begun to fall behind?  (Each year, many of us simply have to dust off the resolutions that we had made twelve months earlier.  They’re good as new.)  This curriculum year provides us a wonderful opportunity to deepen our knowledge of the Old Testament, to understand it better. It is, in very fact, the foundation for all of our scriptures.

On the first proposal for the Great Seal of the United States, see https://www.greatseal.com/committees/firstcomm/reverse.html.

Thanks for your wonderful insights on the interrelatedness of the 3 books of scripture. I have printed your article to refer to again in my future studies.

I also love reading the Old Testament. The symbolism, imagery, and the powerful prophecies touch me every day - especially when I see those prophecies being fulfilled. For example, Isaiah warned against the prevailing trend of today of finding fault with someone for making an innocent comment that can be twisted out of context. "That make a man an offender for a word, and lay a snare for him that reproveth in the gate, and turn aside the just for a thing of nought." (Isaiah 29:21). Or Isaiah 5:20 - "Woe unto them that call evil good, and good evil; that put darkness for light, and light for darkness; that put bitter for sweet, and sweet for bitter!" There are score of examples of this every day. The Old Testament is full of sound doctrinal advice to help us detect and avoid evil and prepare for the Coming of the Savior.