Why Is the “Pentecostal” Season in Kirtland Believable? | Meridian Magazine 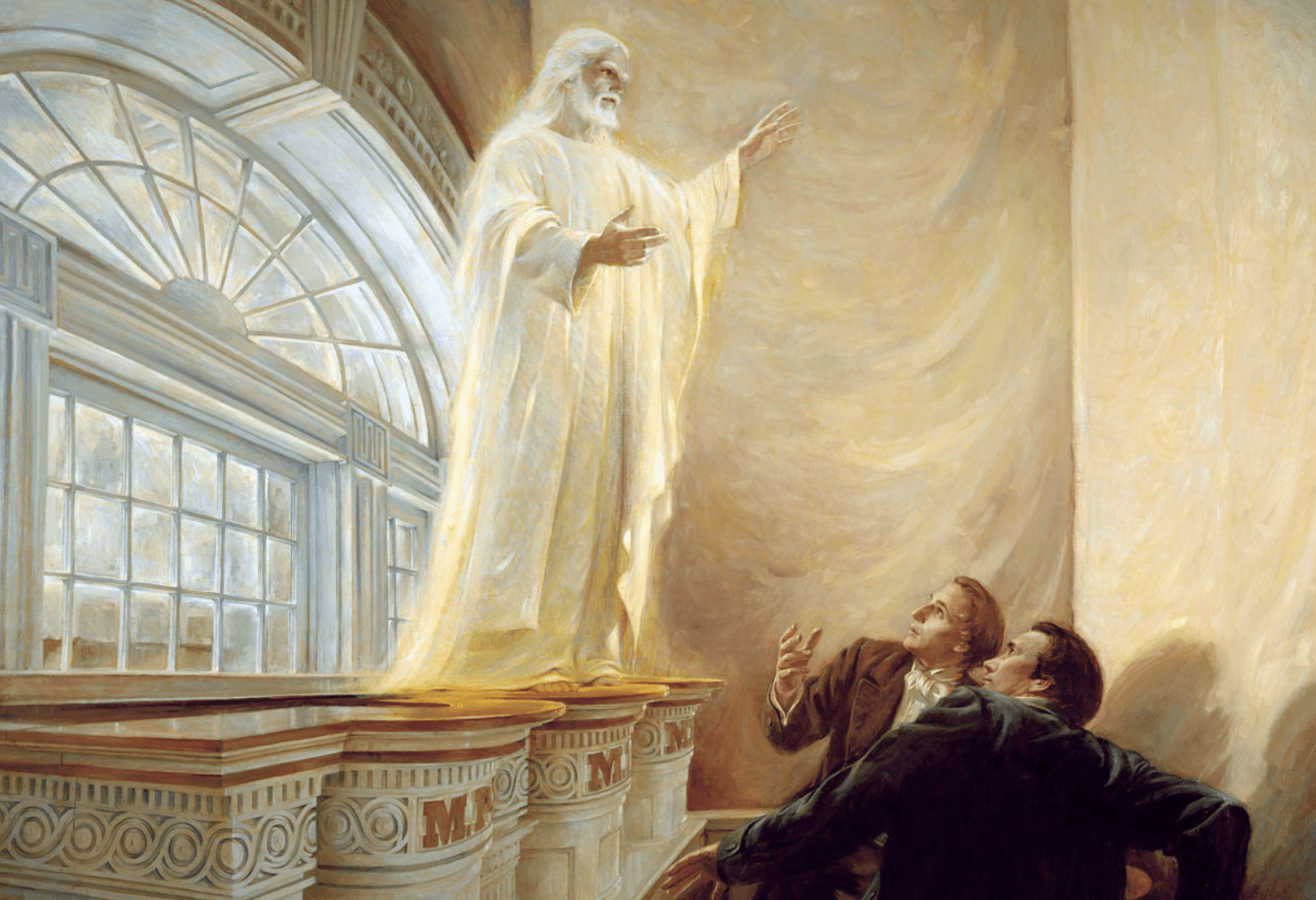 Why Is the “Pentecostal” Season in Kirtland Believable?

“The veil was taken from our minds, and the eyes of our understanding were opened” Doctrine and Covenants 110:1

The months and weeks surrounding the completion and dedication of the Kirtland Temple witnessed a Pentecostal-like outpouring of heavenly manifestations. According to Milton V. Backman Jr., “During a fifteen-week period, extending from January 21 to May 1, 1836, probably more Latter-day Saints beheld visions and witnessed other unusual spiritual manifestations than during any other era in the history of the Church.”1 Karl Ricks Anderson has documented eight different occasions in which the Savior appeared at the temple during this period.2

Fortunately, the glorious outpouring of divine manifestations is very well documented by several contemporaneous eyewitness sources. Historian Steven C. Harper highlights six accounts written during this pentecostal period that document some of the heavenly manifestations that were occurring at that time.3

Benjamin Brown, an 1835 convert to the Church, began writing a letter to his wife sometime shortly before the March 27, 1836, solemn assembly, during which the temple was dedicated. In his letter, Brown chronicled “many marvelous things” that had transpired in recent days and weeks. “Many visions are given … by night and by day,” he said. “Some have seen the heavens opened and seen the Savior, others have seen angels on the four corners of the house of the Lord.” And still others saw incredible visions of various biblical prophets—Adam, Elisha, Peter, James, and John—and of cloven tongues, just like those seen on the day of Pentecost in Acts 2:3.4

Oliver Cowdery was intimately involved in the administration of sacred ordinances and divine manifestations leading up to the Kirtland Temple’s dedication. He kept short, journal-like entries on these events in a sketch book from January to March 1836. Oliver briefly noted various occasions when “the heavens were opened to many” and people saw visions, prophesied, and spoke in tongues. Like Brown, Oliver recorded seeing cloven tongues on the day the temple was dedicated.5 Oliver also provided a detailed report of the proceedings in the Messenger and Advocate, wherein he reported that a “Holy Angel”—identified in other sources as the Savior—was seen at the proceedings sitting between Fredrick G. Williams and Joseph Smith Sr.6

As the bishop in Kirtland, Edward Partridge was directly involved in many of the meetings where heavenly manifestations occurred. Partridge kept a detailed diary during this period and mentioned multiple occasions when people saw visions and spoke in tongues during the administration of sacred ordinances. He confirmed that Williams “saw an angel or rather the Savior” during the dedication of the temple.7

In the first week of April 1836, W. W. Phelps wrote a letter to his wife, Sally, documenting several of the sacred events of the preceding weeks. Phelps confirmed the appearance of an angel (or the Savior) during the dedicatory meeting on Sunday, March 27, and mentioned various occasions when people prophesied or spoke in tongues. He also reported on the events of the following Sunday, April 3, when a second dedicatory session was held, at which “the curtains were dropped. … And there was a manifestation of the Lord to Br. Joseph and Oliver, [by?] which they [learned?] thus the great and terrible day of the Lord as mentioned by Malachi, was near, even at the doors.”8

Less well known is the record left by Stephen Post, an 1835 convert who had been called to the Second Quorum of the Seventy. He kept a detailed journal throughout much of his life and recorded many details about the dedication of the Kirtland Temple and other surrounding events. Concerning the solemn assembly on March 27, Post noted that Fredrick G. Williams saw an angel enter the temple and stay for the proceedings. That night was a “continuation of our Pentecost”: angels and cloven tongues were seen, and many people spoke in tongues and prophesied. Post recorded similar manifestations in the days that followed.9

The most detailed account is that of Joseph Smith himself in his 1835–1836 journal. Joseph (or one of his scribes) elaborated on various gatherings and the sacred ordinances and the heavenly manifestations received during this period—including the account of the visits of Jehovah, Moses, Elias, and Elijah on April 3, 1836, canonized later as Doctrine and Covenants 110. This was the final and culminating appearance of the Savior during that extraordinary period of time.10

During a Sabbath day meeting, after the administration of the sacrament the veils around the pulpit were dropped while the veil over the eyes and minds of Joseph Smith and Oliver Cowdery was lifted (see D&C 110:1). “We saw the Lord standing upon the breastwork of the pulpit,” they declared. “His eyes were as a flame of fire; the hair of his head was white like the pure snow; his countenance shone above the brightness of the sun; and his voice was as the sound of the rushing of great waters, even the voice of Jehovah” (D&C 110:2–3). The Lord accepted the temple and assured Joseph and Oliver, “My name shall be here; and I will manifest myself to my people in mercy in this house” (D&C 110:7).

Immediately following this vision, “Moses appeared before us, and committed unto us the keys of the gathering of Israel” (D&C 110:11). This was followed by the appearance of Elias, who “committed the dispensation of the gospel of Abraham” (D&C 110:12). Lastly, Joseph and Oliver reported that “another great and glorious vision burst upon us; for Elijah the prophet, who was taken to heaven without tasting death, stood before us” (D&C 110:13). The time had “fully come” at last to fulfill the prophecy made by Malachi and repeated by Moroni that Elijah would come and the hearts of fathers and children alike would be turned to one another.11

Those first few months of 1836 in Kirtland witnessed one of the greatest spiritual outpourings in history as the temple was completed and certain sacred ordinances were administered for the first time in this dispensation. The incredible series of heavenly manifestations would not be as believable were it not for the exceptionally solid historical documentation left behind by those who were present. As Steven C. Harper noted, “Thanks to their lengthy, detailed, contemporaneous documents, modern readers have the benefit of several independent eyewitness accounts of these events.”12

Despite the incredible nature of these experiences, the contemporaneous eyewitness accounts are realistic and, if anything, understated, which adds to their credibility. Speaking of the account provided in Joseph Smith’s journal, specifically, Harper observed, “Joseph’s descriptions of the pentecostal experiences at Kirtland are characteristically straightforward, lacking hyperbole, affirming matter-of-factly that the promised blessings were obtained.”13 In other words, it convincingly comes across as personal reflections on what actually happened rather than as an attempt to sway or impress any audience.

Still, realizing the monumental nature of these events, Joseph Smith could not help but get overwhelmed by the spiritual outpouring at times. At one point during this glorious period, Joseph declared, “It was a Pentecost and endowment indeed, long to be remembered for the sound shall go forth from this place into all the world, and the occurrence of this day shall be handed down upon the pages of sacred history to all generations.”14

Nearly two hundred years later, this statement has proven to be prophetic as these events continue to be remembered thanks to the diligent recordkeeping of several direct participants. Among the many incredible miracles, visions, and divine manifestations that are well documented in the early years of the Restoration, none other enjoys such a strong, contemporaneous historical record as the 1836 season of divine manifestations that many experienced in Kirtland.

4.For a full transcript of Brown’s letter, see Harper, “Pentecost and Endowment Indeed,” 359–363. Throughout this KnoWhy, all quotations from primary sources are standardized in spelling, punctuation, and capitalization.

6.See the transcript of Oliver’s Messenger and Advocate report in Harper, “Pentecost and Endowment Indeed,” 366–370. On p. 369, Oliver says, “President F. G. Williams bore record that a Holy Angel of God, came and set between him and J. Smith, sen. While the house was being dedicated.” See also Frederick G. Williams III, “‘An Angel or Rather the Savior’ at the Kirtland Temple Dedication: The Vision of Frederick G. Williams,” BYU Studies Quarterly 56, no. 1 (2017): 119–134.

7.For a transcript of Partridge’s diary entries, see Harper, “Pentecost and Endowment Indeed,” 370–373.

8.For a transcript of Phelps’s letter, see Harper, “Pentecost and Endowment Indeed,” 373–374. Brackets are insertions by Harper. April 1, 1836, was the beginning of the week-long celebration of Passover that year on the Jewish calendar. So the coming of Elijah occurred during that season of Passover, when a place was set at the Seder meal for the promised return of Elijah. See Stephen D. Ricks, “The Appearance of Elijah and Moses in the Kirtland Temple and the Jewish Passover,” BYU Studies 23, no. 4 (1983): 483–486.

9.For a transcript of Post’s journal entries, see Harper, “Pentecost and Endowment Indeed,” 376–379.