Why Is the Book of Mormon’s Historical Authenticity So Important? | Meridian Magazine 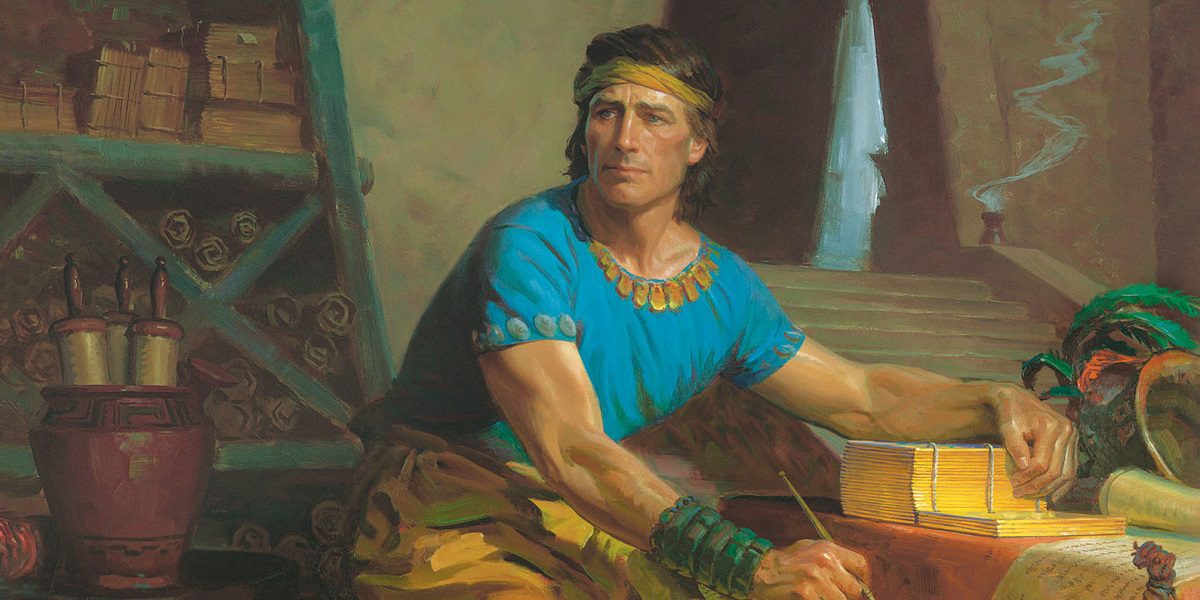 Why Is the Book of Mormon’s Historical Authenticity So Important?

“Did I not declare my words unto you, which were written by this man, like as one crying from the dead, yea, even as one speaking out of the dust?” Moroni 10:27

The Book of Mormon describes itself as “an abridgment of the record of the people of Nephi, and also of the Lamanites” as well as “an abridgment taken from the Book of Ether also, which is a record of the people of Jared,” which was “sealed by the hand of Moroni, and hid up unto the Lord, to come forth in due time by way of the Gentile—The interpretation thereof by the gift of God” (Book of Mormon Title Page). The Book of Mormon’s claimed ancient provenance–––its purported authors, compilers, and editors, as well as their source material–––is very clearly delineated throughout its pages.1 So too are its claimed ancient historical settings.2 To cite just one example, Mosiah 2–5 preserves a speech purportedly delivered by an ancient king named Benjamin around the year 124 B.C. in the land of Zarahemla and recorded by scribes who “sent forth” his words to the people (Mosiah 2:8).

Joseph Smith, the “author and proprietor” and “translator” of the Book of Mormon,3 provided explicit accounts throughout his life as to how he produced the book.4 According to his own description, Joseph was visited by an angel on the evening of September 21, 1823. Joseph identified this angel on multiple occasions as Moroni, the final author and editor of the Book of Mormon.5 Moroni informed young Joseph of “a book . . . written upon gold plates, giving an account of the former inhabitants of this continent, and the source from whence they sprang” (Joseph Smith­­­–––History 1:34).6 These plates were delivered to Joseph by the angel Moroni four years later to the day (JS–––History 1:59).7 Through divinely prepared seer stones, Joseph was able to translate the record by “the gift and power of God.”8

Joseph Smith set some very high stakes with his account of the coming forth of the Book of Mormon. As one historian recognized, Joseph “rested his own veracity, the historicity of the Book of Mormon, the reality of his prophetic mission, and the legitimacy of his church on the existence of the plates”9 In other words, Joseph Smith made stark and matter-of-fact assertions about the angel, the plates, and the method of the translation. Therefore, if these declarations are not true, then his credibility as an inspired prophet, as well as the credibility of his claim of having restored the church of Jesus Christ, is fatally undermined.10 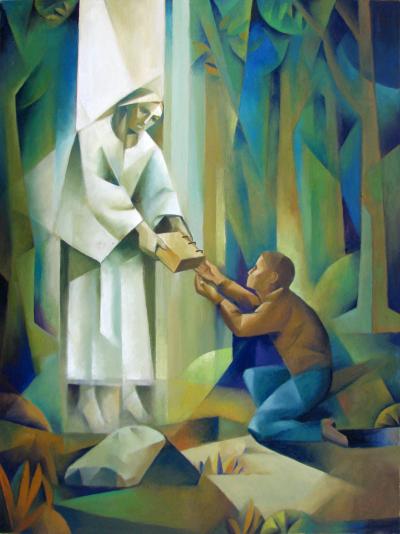 “Moroni Delivers the Plates to Joseph Smith” by Jorge Cocco

The coming forth of the Book of Mormon under such dramatic and miraculous circumstances compels everyone to decide for him or herself whether to accept the book–––and thereby the statements of Joseph Smith–––or not. “The strong historical assertions of the [Book of Mormon] seem to allow for only three possible origins,” scholar Grant Hardy observed. “As a miraculously translated historical document, as a fraud (perhaps a pious one) written by Joseph Smith, or as a delusion (perhaps sincerely believed) that originated in Smith’s subconscious.”11Ultimately everyone must make a decision at some point about whether the book is what it claims to be.

In order to bypass this situation, some have proposed that the Book of Mormon should be read as non-historical and yet as inspired scripture–––that is, as nineteenth century inspired fiction.12 One proponent of this approach has argued that “members of the Church of Jesus Christ of Latter-day Saints should confess in faith that the Book of Mormon is the word of God but also abandon claims that it is a historical record of the ancient peoples of the Americas. We should accept that it is a work of scripture inspired by God in the same way that the Bible is inspired, but one that has as its human author Joseph Smith, Jr.”13

Another proponent of the “inspired fiction” theory for the Book of Mormon has claimed that Joseph Smith utilized vast amounts of reworked biblical material to create “new holy fictions.”14 In this way, this author alleged, Joseph Smith was the “inspired author” of the Book of Mormon because he created new fictional scripture in the same way that ancient biblical authors created fictional scripture.

Finally, another advocate for reading the Book of Mormon as “inspired fiction” has argued that the book was produced by a method called “automatic writing.” Automatic writing is the phenomenon where texts are allegedly written with no conscious or deliberate effort, and instead are the result of the author’s or scribe’s subconscious or supernatural powers. If the Book of Mormon was produced in this manner, the argument goes, then Joseph Smith could not have been consciously attempting to deceive anyone. Therefore his integrity might remain intact, and the book might be read as inspired scripture while not having any historical authenticity.15

These efforts to read the Book of Mormon as “inspired fiction” may be well-meaning, but they are logically incoherent. Daniel Peterson has succinctly laid out the logical problem with this theory. “If the plates really existed, somebody made them. And if no Nephites existed to make them, then either Joseph Smith, or God, or somebody else seems to have been engaged in simple fraud. The testimony of [those associated with the coming forth of the Book of Mormon] exists, I think, to force a dichotomous choice: true or false?”16 Failing to provide an explanation for this dichotomy ignores an essential aspect of the Book of Mormon.17

Even worse, rather than preserving the Book of Mormon’s inspired teachings as intended, the “inspired fiction” theory actually harms the believability and power of the book’s testimony of Jesus Christ. “From the title page to the book’s final declaration,” wrote Elder Jeffrey R. Holland, “this testament reveals, examines, underscores, and illuminates the divine mission of Jesus Christ. . . . The Book of Mormon has many purposes, but this one transcends all others.”18

The Book of Mormon attempts to persuade all men and women that “Jesus is the Christ, the Eternal God” (Book of Mormon Title Page) not only by describing the inspired teachings of ancient prophets who foretold his birth, life, ministry, Atonement, death, and Resurrection, but also by narrating the actual appearance of the resurrected Jesus to the ancient Nephites in the New World (3 Nephi 11–26). If these ancient prophets never existed, and if a resurrected Jesus never actually appeared to the ancient Nephites, then the Book of Mormon loses all its credibility as another testament of Jesus Christ.

This point is reinforced by the fact that two different Book of Mormon prophets warn their readers that they will one day stand face to face with them and be held accountable for whether they accepted or rejected their teachings. “And now, my beloved brethren,” the prophet Nephi wrote in his concluding remarks,

Christ will show unto you, with power and great glory, that [the words in Nephi’s record] are his words, at the last day; and you and I shall stand face to face before his bar; and ye shall know that I have been commanded of him to write these things, notwithstanding my weakness. . . . for these words shall condemn you at the last day. For what I seal on earth, shall be brought against you at the judgment bar; for thus hath the Lord commanded me, and I must obey. Amen. (2 Nephi 33:10–11, 14–15)

And I exhort you to remember these things; for the time speedily cometh that ye shall know that I lie not, for ye shall see me at the bar of God; and the Lord God will say unto you: Did I not declare my words unto you, which were written by this man, like as one crying from the dead, yea, even as one speaking out of the dust? I declare these things unto the fulfilling of the prophecies. And behold, they shall proceed forth out of the mouth of the everlasting God; and his word shall hiss forth from generation to generation. And God shall show unto you, that that which I have written is true. (Moroni 10:27–29)

For these and other reasons the prophetic leaders of The Church of Jesus Christ of Latter-day Saints have emphasized the profound importance of the authenticity of the Book of Mormon.19 Indeed, as the Prophet Joseph Smith himself made clear, “Take away the Book of Mormon, and the revelations, and where is our religion? We have none.”20