Why is a “Ceremony” Mentioned After King Noah is Executed? | Meridian Magazine 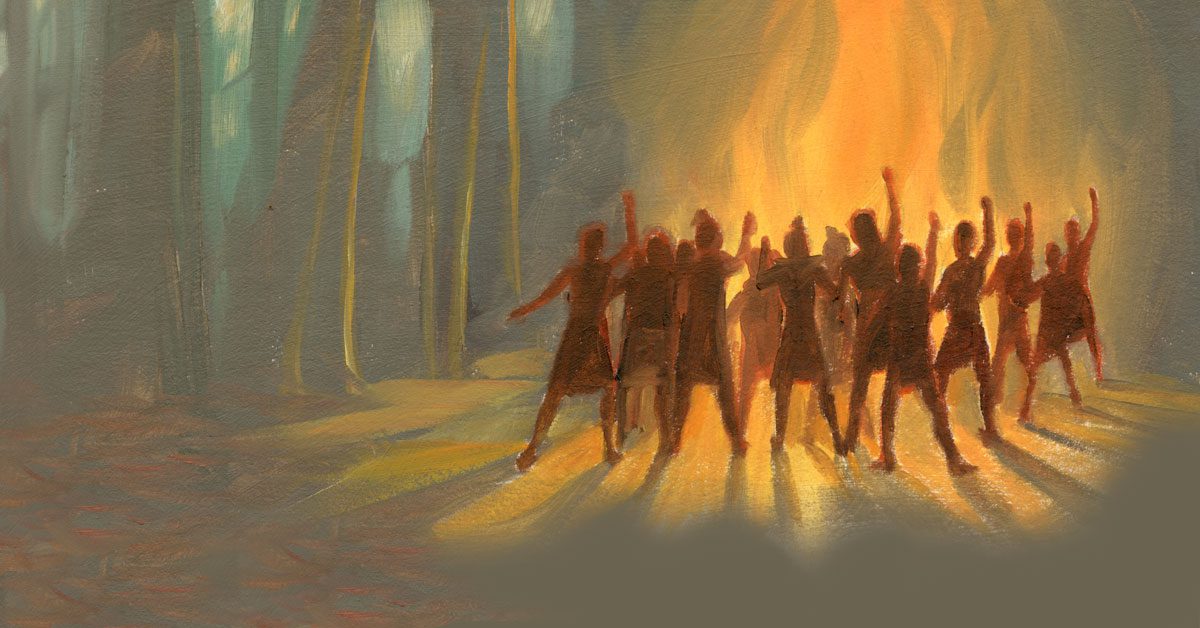 Why is a “Ceremony” Mentioned After King Noah is Executed?

“And it came to pass that after they had ended the ceremony, that they returned to the land of Nephi, rejoicing, because their wives and their children were not slain” Mosiah 19:24

As prophesied by Abinadi (Mosiah 17:18), King Noah was put to “death by fire” by some of his own people. They turned on Noah and his priests in the wilderness when he commanded them to stay with him, and prohibited them from returning to the land of Nephi to avenge the presumed deaths of their wives and children (Mosiah 19:19–20). As the people were on their way back to the land of Nephi, they met the “men of Gideon,” and explained to them “that they had slain the king” (Mosiah 19:23), and then it says “after they had ended the ceremony, that they returned to the land of Nephi, rejoicing because their wives and their children were not slain” (Mosiah 19:24, emphasis added).

The use of the word ceremony here is somewhat puzzling, as seemingly nothing ceremonial is described as occurring. Royal Skousen, editor of the Book of Mormon Critical Text Project, believes ceremony may be a scribal error made when the text was copied over from the Original Manuscript to the Printer’s Manuscript. Instead, he argues, it could have been the word sermon, which in Old English could refer to a conversation like the one between the men of Gideon and people who slew Noah (Mosiah 19:23). The Original Manuscript for Mosiah 19 has not survived, but Skousen hypothesizes that sermon may have been misspelled as cermon, and that Oliver Cowdery then miscopied it into the Printer’s manuscript as cerimony (his misspelling of ceremony).1

Others, however, believe that there are appropriate ceremonial contexts alluded to in this passage.2 John A. Tvedtnes believed it was referring to a washing ceremony intended to ritually purify a “manslayer.”3 Drawing on evidence from the Bible and the ancient Near East, Tvedtnes argued “that the ‘ceremony’ of Mosiah 19:23–24 is one of purification associated with the onset of the fall festivals of the month of Tishre, at which time citizen soldiers in the ancient Near East returned home to engage in the fall harvest.”4 This possibility works well, since these men were returning from a military movement and the killing of their king. They returned with “rejoicing” (Mosiah 19:24), which could well have involved abundant offerings of thanksgiving, particularly on the recent conclusion of the celebration of Pentecost.5

Alternatively, John L. Sorenson has argued that the Nephites apparently had a standard “execution ceremony” that accompanied executions like that of Noah, as evidenced by the ceremonial speech or actions mentioned in connection with the executions of Nehor (Alma 1:15) and Zemnarihah (3 Nephi 4:28–33).6

Ceremonial details are most clear in the execution of Zemnarihah, which John W. Welch said was “one of the most complete accounts of an execution ceremony found in any ancient record.”7 Welch has shown that the account “closely followed ancient customs of ceremony and law.”8 After Zemnarihah was “hanged upon a tree … they did fell the tree to the earth.” All the people who witnessed the hanging ceremonially cried out,9 invoking God’s protection upon the people and a simile curse upon their future enemies, and they then praised and thanked God (3 Nephi 4:28–32).10 The execution of Nehor is less detailed, but the mention of a forced confession “between the heavens and the earth” is strongly suggestive of the normal use of some kind of ceremony or rite of execution.11

No such confession or rituals of joyous exclamation occurred in the case of the killing of King Noah. Perhaps because the priests of Noah had fled, the insurrection was incomplete, and the men were still uncertain about their fate when they “met the men of Gideon” (Mosiah 19:22). At that point, a cause for celebration and the ceremonial conclusion of the death of their tyrant king was certainly in order.

In addition, Brant A. Gardner has suggested several other possibilities that were appropriate at this time, including “a ceremony of greeting,” or perhaps “a ceremony of surrender” to Gideon’s men, or a truce which allowed to two groups to reunite and converse safely, realizing there was no longer any hostile intent. Gardner also suggested that this word could be referring to “the ‘ceremony’ of formal submission to the Lamanites,” which would allow these men who had deserted with King Noah to agree to the terms of the treaty already entered into with the Lamanites by Limhi and Gideon (set forth in Mosiah 19:15). This was then formalized by “an oath” upon their return to the city of Nephi, as described in Mosiah 19:25.12

While it is possible that this is a scribal error, as proposed by Skousen, scholars like Tvedntes and Sorenson have shown that there are hints of new knowledge to be discovered by exploring several possible ceremonial and covenantal contexts standing behind Mosiah 19:24. When this reference is brought into context with other passages describing executions of wicked enemies in the Book of Mormon, it becomes clear that there is customarily a ceremony involved, and one would especially expect that the execution of a wicked king would have been no different. When biblical and ancient Near Eastern contexts are considered, the appropriateness in this multi-party passage of many aspects of ritual purification ceremonies becomes enlighteningly clear. What at first seemed puzzling is illuminated by several plausible settings and backgrounds after a little exploration.

Whatever the possible meanings of “the ceremony” might be in Mosiah 19:24, the word would not have been included in this ancient record unless it stood for some very significant things. And thus, behind this one word, one can detect the solemn importance of several things: Of protecting wives and children, of purification, of brotherly reconciliation and reunification, of covenantal submissiveness, and of giving thanks and praise to God.

As Nibley once said, “the Book of Mormon is tough; it thrives on investigation.”15 Those who are willing to take it seriously—even when it at first seems strange or puzzling—will often find that new knowledge awaits if they will dig a little deeper into this rich and thoroughly rewarding book of scripture.

2.Skousen, Analysis of Textual Variants 3:1444 rejects this approach simply because, in his view, “we can always find some culture somewhere with a practice that will support virtually any given reading.” Thus, Skousen rejects all approaches that attempt to resolve confusing passages contextually rather than with linguistic evidence.

6.John L. Sorenson, Mormon’s Codex: An Ancient American Book (Salt Lake City and Provo, UT: Deseret Book and Neal A. Maxwell Institute, 2013), 190–191. Sorenson responded to Skousen’s argument, stating “in the three cases where the Book of Mormon reports the execution of a malefactor, the accompanying behavior described is clearly ceremonial. That the word ceremony is used in the text to describe only one of those cases is insufficient justification for Skousen’s speculation that the scribe misheard sermon from Joseph Smith’s mouth (a word found nowhere in in the text)” (p. 191 n.19). In an earlier publication, Sorenson noted “Mesoamerican ceremonial practices involving death and sacrifice,” which “may clarify the mystery of the strange ritual” intended by “ceremony” in Mosiah 19:24, but he did not specify or describe the rituals he had in mind. See John L. Sorenson, Images of Ancient America: Visualizing Book of Mormon Life (Provo, UT: FARMS, 1998), 189.

9.Welch, Legal Cases, 354 notes that since the people “all shouted and sang out in unison,” it is most likely “the people were repeating customary or ritualistic words.”

13.Hugh Nibley, Lehi in the Desert/The World of the Jaredites/There Were Jaredites (Salt Lake City and Provo, UT: Deseret Book and FARMS, 1988), 153.

Either one could be correct, but probably "ceremony." The Zeniffite people had already ratified him as their king, and now the rest of the group had to take the oath and swear obedience.

Read some Royal Skousen and some Stanford Carmack. "Ceremony" translated from original manuscript text was actually "sermon" and was changed by early editors. Early English usage of "sermon" referred to a discussion or conversation, not what we think of as a sermon today.