Why “Heart of Africa” will Grab Your Heart | Meridian Magazine 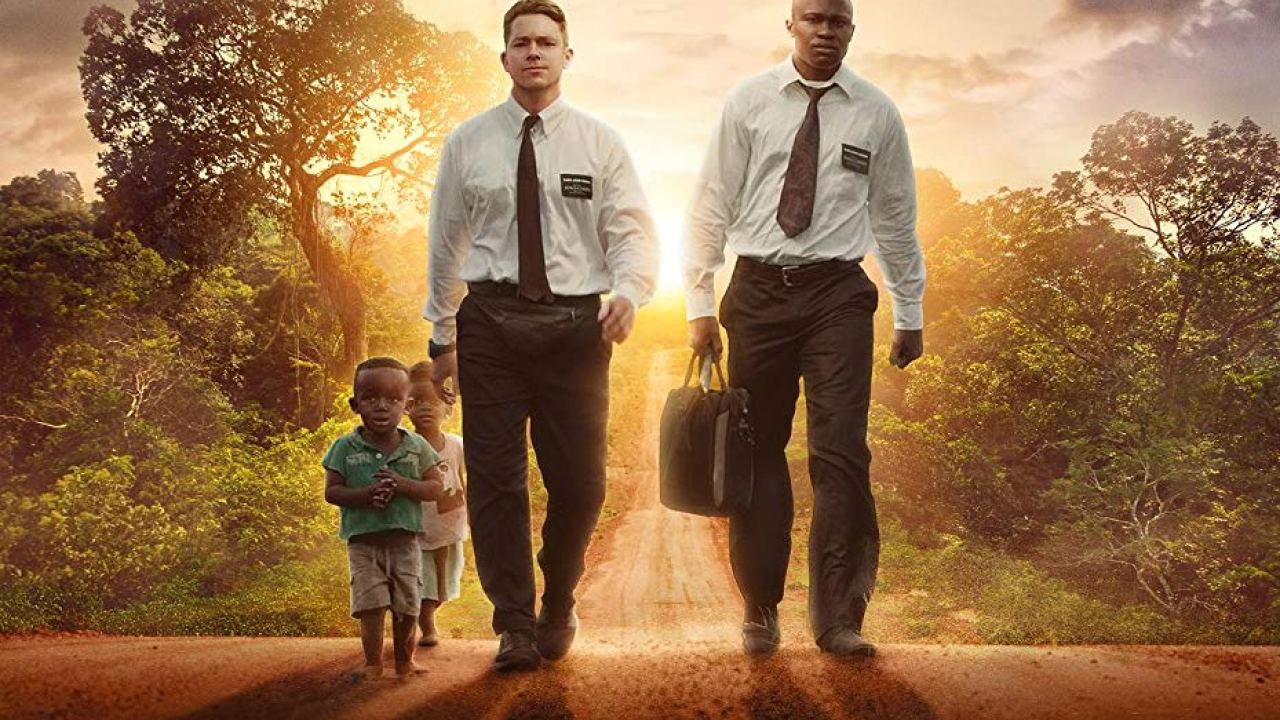 Why “Heart of Africa” will Grab Your Heart

Editor’s Note: Due to a technical error, an earlier version of this article cut off before the end of the story. Here now is the full version.

As film-goers, we are used to seeing multi-million dollar budgets made by practiced directors and writers who know just how to sweep us off our feet. So I am never quite sure what to expect when I see a much more low-budget film from a newcomer. Will there be moments when you just have to wince a bit, shrink in dismay before flat characters and storylines that don’t quite work?

Sometimes Latter-day Saint films fall into that category, but with a new film, Heart of Africa, just released in Utah, you have a polished gem, that is designed to move you with complex characters, raise you to look at tough issues, and insert you whole-heartedly into the texture and pulse of Africa.

This isn’t American’s doing Africa with our easy stereotypes. It is authentically African and a film that sports several firsts. A film directed by a Congolese director, Tshoper Kabambi, who is also a Latter-day Saint. A crew that is all Congolese. Actors that are Congolese, except one. Much of the film is in the native tongue with English sub-titles.  And it all works! The audience at the preview agreed that they were moved and enthralled by what they had seen.

It is the story that is so compelling. Latter-day Saints know we have rich stories to tell. Most of our untold stories just lie waiting for a voice to give them life. The Congolese also have remarkable stories, buried because they have had no voice. So this film is a marriage of both, and it is the journey of a young man out of hatred and suspicion into the forgiveness and love of the gospel.

Aimé Mbuyi grew up as a member of one of Congo’s revolutionary groups. He thought of himself as fanatic and valiant member, dedicated because he did not like the white people. They were, for him and his group, the enemies of Africans, those responsible for the misfortunes of his people. That misery can hardly be calculated.

It was his way of confronting the pain of his country’s history. Though statistics are unreliable, it is suggested that around ten million died under the rule of King Leopold II.  Ironically, the nation is probably one of the richest on earth in terms of natural resources, but is currently listed as the poorest on the poverty index.

The anger, division and suspicion that has grown among a people that have been so down-trodden is palpable, and it has broken down Congolese society so that revolutionary groups have congregated around particular leaders. Others are considered enemies. Violence is too often the upshot.

Latter-day Saints have not been exempt from that violence. Right now, thirty Latter-day Saint Congolese live in a refugee camp in Malawi, forced from their homes in the Congo by the threats and violence of rival groups who did not like their politics.

Heart of Africa was the brainchild ofMargaret Blair Young, who was also the co-writer of the film, and she and her husband, Bruce were producers. In seeking to understand the situation in the Congo, she wrote that civil wars in Rwanda had bled into the Congo.

She said, “It was a lesson on how a war-based world view can spread like a disease. Soldiers from Rwanda and other countries, having experienced the soul-numbing effects of their own civil wars, conscripted child soldiers in the Congo. They appropriated land, including cemeteries, and freely sold anything they claimed.”

Abused on every side, some of the Congolese, especially those who live in the east, might claim as one of the lines expressed in the movie suggests, “We have a right to our anger.” These revolutionary groups often gave its members a sense of identity, a way to over-come trauma and a worldview.

For Aimé Myumbi, the revolutionary group he belonged to really mattered, so what a surprise to him it was to meet two missionaries from The Church of Jesus Christ of Latter-day Saints. He said, “The message of these men pierced my heart, to the point it touched my most intimate feelings.” But could he abandon the revolutionary group whose mission he believed himself born for—reclaiming the dignity of the Congolese?

While he was confused which way he should go, his mother told him that he needed to follow his heart. He said, “As a result, a deep testimony was born in me and my hatred for white people was turned into unconditional love.”

He came to understand that the only way forward was through complete forgiveness and love.

Aimé today is the temple facilities manager of the Kinchasa temple.

This was the story that Margaret saw needed to be told, but who could do it? She and Bruce wanted it to be a movie for the Congolese as well as for the Americans, since they have no cinema there and no way to tell their story. Most look at the Congo and only see pain. The Youngs looked and saw humanity and beauty and hope, symbolized by the journey that this young Latter-day Saint had taken.

Was there anyone in the Congo who was ready and qualified to take on this project?

Aimé had a Facebook friend named Tshoper Kabambi, a filmmaker of a few short films, and though they only knew each other through social media, they had talked often. Aimé and Margaret decided to seek out Tshoper to see if he would be interested in doing this film.

But Aimé started another campaign with Tshoper as well. “I would like you to visit my church,” he said.

Tshoper said that Aimé continued to invite him to come, but he resisted. He hadn’t been in a church for many years. Then one night he had a dream. He said, “I saw a church that looked like a mansion and when we went inside, on the wall was a sign that said, ‘Jesus Christ is the way, the truth, and the life.’”

Since he had never visited The Church of Jesus Christ before, he said to his wife, “Let’s go and see if it looks like my dream.”

So they visited church on a Sunday, and his wife said, “It looks like the building you described,” but he said, “I didn’t see any sign on the wall like in my dream. “ Instead, he said that he felt it in his soul.

“When I was in the Church, I liked everything they were doing. I liked the way they sung. I liked that anyone could bare testimony. I liked what the classes taught. I felt like I had been in the Church a very long time because it is what I imagined a church would be.“

Then Tshoper had two more astonishing dreams. In the first dream, he was by his car in a parking lot, when suddenly it just took control of itself and rolled away. “I was following and crying and tell people to help me to stop my car. I need my car. Unstopped, the car rolled into the river and begun to sink. I was helpless to stop it. Suddenly I saw someone from the church who came and was very powerful and lifted my car out of the river with one hand. As the car emerged, it had become new. It was born again.”

He wouldn’t understand the meaning of his next dream for some time. In this third dream, his uncle came to him who had died a long time ago, Tshoper said, “You died. Why are you here?”

His uncle answered, “I am here because I have a message for you. Our family needs you to be baptized so you can be baptized for us.” At that point, Tshoper had not yet learned about baptism for the dead, and when he was taught the principle, suddenly the dream made sense.  He said, “When they taught me, I was like ‘no way”. My uncle told me that in a dream.”

Tshoper’s road to becoming a filmmaker was equally remarkable. As the child of a poor family in the Congo, he had never seen a movie or watched television. He said, “My first dream was just to first see a movie. My friends told me what it was like, but I had never seen this before.”  To start from having your only wish be to see a movie to being able to make one in a country where that is impossible was a journey for him of tenacity and holding fast to dreams.

Making Heart of Africa demanded the resourceful thinking of everyone involved to solve the problems. “It can be painful and difficult to make a movie in the Congo he said.  Policeman show up when you are trying to shoot a scene. They say, ‘Pay us some money and we will let you go.’ We’d lose a day and we’d lose money. Sometimes the police would come and arrest people just because they are laughing.”

What compounded the problem is that American actor Brandon Ray Olive, who plays a missionary companion, was at the shooting. “Everybody thinks Americans are rich and they have a lot of money,” said Tshoper. “They wanted to arrest him for money.”

To this point, they have only had two showings of the movie in the Congo. For these, they had to rent the hall, rent the chairs, and rent the projector and the police came three times.

Ultimately, though, says Tshoper, “It’s very important to tell the stories of my people. Most of the movies that come to the Congo are not made by Congolese people. Those film makers don’t know who we are. They just take some sad story and exploit it. Behind war, behind poverty, there is also love. There is also patience. There are also people who are beautiful.

“Our goal is to show how to build a better country, to show them that they have to dream. Everybody around the world dreams about America. Americans have faith in themselves and they trust in their potential. Congolese people can change their situation. They can change their country. They can be something. We need to make movies to help define ourselves in a different way.”

As others have noted, HEART OF AFRICA is currently available through Living Scriptures (till April 19) for renting or owning online. Go to https://www.livingscriptures.com/heart DVDs will be available in a few weeks from Deseret Book. I hope all who are interested will take advantage of one of these ways of seeing the film. It's really a moving, eye-opening experience, and it's thrilling to see the wonderful work accomplished by this team who created the first Congolese film to be released theatrically in the US.

Living Scriptures now has it available to rent since its theatrical screening time was cut short.