Why Does Isaiah Prophesy of the Daughter of Zion? | Meridian Magazine 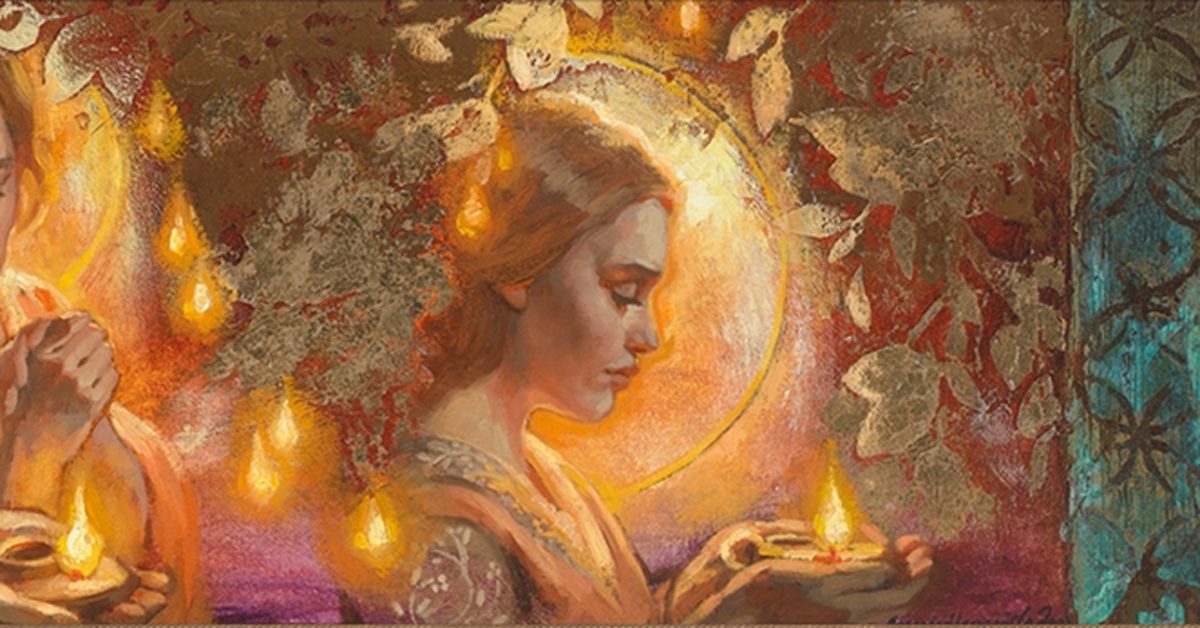 Why Does Isaiah Prophesy of the Daughter of Zion?

While many of the Book of Mormon’s stories are told and influenced by men, one prominent woman in the Book of Mormon pervades the text, yet is often overlooked. This woman is the daughter of Zion, an abstract and inspiring embodiment of the future glorification and enthronement of the House of Israel and the Nephites.

The daughter of Zion is a poetic personification of the city Jerusalem, and by extension is a metaphor for the House of Israel. This phrase is employed in Isaiah and other parts of the Old Testament to represent the collective righteousness of the House of Israel.1 Similar to the “bride of Christ” metaphor found in the New Testament, the daughter of Zion is described as being in an intimate and covenantal relationship with the Lord.2 The daughter of Zion’s wickedness is described in terms of causing her shame and mortification, while her righteousness brings about her glory and royal enthronement.

In the Book of Mormon, the daughter of Zion appears in quotations of Isaiah.3 First, Jacob quotes Isaiah 52:2 in 2 Nephi 8:25. This powerful call for the “captive daughter of Zion” to rise up and shake off the dust and bands of bondage will be quoted again by Jesus in 3 Nephi 20:37, and by Moroni in Moroni 10:31.

And second Nephi quotes Isaiah 10:32 in 2 Nephi 20:32, prophesying that the Lord “shall shake his hand against the mount of the daughter of Zion, the hill of Jerusalem.” Here, in the long block of Isaiah chapters in the middle of 2 Nephi, she serves to highlight both Nephi’s despair and hope for the tragic fate of his people, which he beheld in the midst of his vision in 1 Nephi 11–14.4

Nephi’s despair at the Nephites’ wickedness and subsequent destruction may also be reflected in the daughter of Zion’s state of disgrace in 2 Nephi 13 (cf. Isaiah 3). This chapter condemns the daughters of Zion and describes the pillaging and desecrating of Jerusalem and her inhabitants:

This passage then proceeds to describe, step-by-step, how the daughters of Zion were gradually and sequentially disrobed and unendowed from their extravagant apparel. The Lord took away their jewelry and accessories, then their outer robes, cloaks, shawls, sashes, and then finally their inner clothing, headdresses, and veils (2 Nephi 13:18–23, cf. Isaiah 3:18–23 NRSV).6 The disrobing of the daughter of Zion left her “burning instead of beauty,” and “she being desolate shall sit upon the ground” (2 Nephi 13:18–26, cf. Isaiah 3:18–26).

In the ancient world, sitting naked in the dust of the ground was the epitome of disgrace and shame.7 Interestingly, echoes of this theme are found in an ancient Akkadian myth about a goddess named Ishtar who descends to the underworld. As the goddess Ishtar descends into the netherworld, she progressively removes items of clothing until she is completely stripped of all her clothing, power, and glory. While this imagery of shame and nakedness is bleak and unflattering, the end of the story blazes with hope. Ishtar ultimately rises again from the underworld through the intervention of the gods. As she rises through the levels of the underworld, she is progressively endowed with additional pieces of her clothing until her full glory is restored.8

Cylinder Seal depicting a scene from the Descent of Ishtar. This artifact is Neo-Assyrian and dates to approximately 720-700 B.C. Image from piney.com

The restoration of the daughter of Zion is likewise an empowering symbol for the ultimate glorification and enthronement of the House of Israel and of the Nephites. When Nephi saw in vision that his seed was doomed to destruction, he recognized the necessity for the Lord to purge the wickedness and wash “away the filthiness of the daughters of Zion” through destruction. When the destruction of Nephi’s branch of the House of Israel produces a purified remnant, the Lord will dwell again in his tabernacle and restore Israel’s glory (2 Nephi 14:4–6, cf. Isaiah 4:4–6).9

Importantly, the future glorification and enthronement of the daughter of Zion is enabled by the Book of Mormon. Despite Nephi’s grief at his people’s destruction, he maintains hope for his posterity’s redemption through the Book of Mormon’s words “crying from the dust” (2 Nephi 33:13).10 Because Nephi’s words were written down, preserved, translated, and delivered unto the remnant of his seed, they can obtain the glory and salvation the gospel offers, and one day “speak with the tongue of angels” (2 Nephi 31:13).11

In a powerful and inspiring tribute to the daughter of Zion, Moroni concludes the entire Book of Mormon record by echoing Nephi’s prophecies. Like Nephi and Jacob, who knew of the future scourge of unrighteousness, Moroni beheld the actual destruction of his people, and yet his final message expresses hope that the daughter of Zion will one day be enthroned and endowed, like the goddess Ishtar, due to the Book of Mormon’s salvific power:

Awake, and arise from the dust, O Jerusalem;
yea, and put on thy beautiful garments, O daughter of Zion;
and strengthen thy stakes and enlarge thy borders forever,
that thou mayest no more be confounded,
that the covenants of the Eternal Father which he hath made unto thee, O house of Israel, may be fulfilled. (Moroni 10:31, cf. Isaiah 52:2).

Endowed with beautiful garments of power and glory, the daughter of Zion is the divine, feminine manifestation of God’s righteous sons and daughters passing through the veil of mortality and entering into the joy, rest, and holiness of the Lord.12

Jeff Lindsay, “‘Arise from the Dust’: Insights from Dust-Related Themes in the Book of Mormon (Part 2: Enthronement, Resurrection, and Other Ancient Motifs from the “Voice from the Dust”),” Interpreter: A Journal of Latter-day Saint Faith and Scholarship 22 (2016): 233–277.

Neal Rappleye, “‘With the Tongue of Angels’: Angelic Speech as a Form of Deification,” Interpreter: A Journal of Latter-day Saint Faith and Scholarship 21 (2016): 303–323.

2.The concept of Christ’s bride finds its most developed manifestation in the New Testament. This covenant relationship is alluded to in the book of Hosea when the prophet Hosea marries Gomer for metaphorical purposes. For New Testament discussions of Christ as the bridegroom of Israel, see Matthew 9:15; 25:1–13; Mark 2:19; Luke 5:34; John 3:29; Revelation 21:2, 9; Ephesians 5:22–33.

4.John W. Welch has argued that 1 Nephi 11–14 influenced Nephi’s selection of Isaiah chapters by likening them to the Nephites. Welch outlines how four main themes (Christ’s coming, the scattering of the Jews, the day of the Gentiles, and the restoration of Israel with the ultimate victory of good over evil) in Nephi’s vision can be mapped to Nephi’s selection of Isaiah chapters in 2 Nephi 12–24. See John W. Welch, “Getting through Isaiah with the Help of the Nephite Prophetic View,” in Isaiah in the Book of Mormon, ed. Donald W. Parry and John W. Welch (Provo, UT: FARMS, 1998), 19–45; Book of Mormon Central, “What Vision Guides Nephi’s Choice of Isaiah Chapters? (2 Nephi 11:2),” KnoWhy 38 (February 22, 2016).

5.In this passage, Isaiah may be describing the disgrace and condemnation of the female inhabitants of Jerusalem for their immodesty and sexual brazenness. However, verse 26 blurs the distinction between the plural “daughters” of Zion, and the singular, abstract “daughter of Zion” so that the metaphor may extend to the daughters’ description in Isaiah 3:16–26. See J. J. M. Roberts, First Isaiah: A Commentary, ed. Peter Machinist (Minneapolis, MN: Fortress Press, 2015), 60–63; Joseph Spencer, The Vision of All: Twenty-five Lectures on Isaiah in Nephi’s Record (Salt Lake City, UT: Greg Kofford Books, 2016) 159–160.

7.See Jeff Lindsay, “’Arise from the Dust’: Insights from Dust-Related Themes in the Book of Mormon (Part 2: Enthronement, Resurrection, and Other Ancient Motifs from the ‘Voice from the Dust’),” Interpreter: A Journal of Latter-day Saint Faith and Scholarship 22 (2016): 233–277.

9.While 2 Nephi 14:4 speaks of the women of Jerusalem, the synonymous parallelism equates the “daughters of Zion” with “Jerusalem,” extending the “daughter of Zion” metaphor to the women referenced in this verse. Verses 5 and 6 continue to personify Jerusalem as a female who will host the presence of the Lord as a cloud and pillar of fire.

10.See also Nephi’s explanation of his words coming “out of the dust” in 2 Nephi 26:13–17. Nephi’s use of dust as a motif to describe his prophecies is a pervasive theme throughout 1 and 2 Nephi. While sitting or lying in the dust is a symbol of shame or humiliation, coming out of the dust becomes a symbol of enthronement and glorification. See Lindsay, “‘Arise from the Dust,’” 233–277.

11.Speaking with the tongue of angels may be a reference to a final endowment of power that comes through progressive ordinances and covenants of the gospel. See Neal Rappleye, “‘With the Tongue of Angels’: Angelic Speech as a Form of Deification,” Interpreter: A Journal of Latter-day Saint Faith and Scholarship 21 (2016): 303–323; Book of Mormon Central, “What is it to Speak with the Tongue of Angels? (2 Nephi 32:2),” KnoWhy 60 (March 23, 2016).

12.For a discussion on the daughter of Zion’s enthronement in the final chapters of Isaiah, see Carli J. Anderson, “Enthroning the Daughter of Zion: The Coronation Motif of Isaiah 60-62” (Master’s Thesis, Brigham Young University, 2005).

When I went to the USA in 2007, at the end of my son's mission [Mission of Peoria, Illinois], I noticed this situation, which is perhaps more pronounced now. But what I remember most was the love and warm welcome that the poorest members have reserved for me, their effort to overcome my difficulties with English and the love and gratitude that they have shown to my son. One of the verses of the hymn Ye Elders of Israel, in Italian, say "we will go to the poor and like Jesus we will help those who suffer the most, with the sweet message of the holy gospel we will open the doors of heaven to all". There are still Saints whose hearts are filled with the love of Christ! What matters is knowing if we are among those. PS. I apologize for my bad English.

So perhaps I'm taking it too literally when it reminds me of many of the women of the church in Utah. Women who now worry so much about their looks they talk about getting the "mommy package", which includes a breast lift and tummy tuck. Women in church who dress to the world's standards, but please, ladies, do not bend over in public. Women so concerned about their giant home, furnished like an instagram picture. Women who are upset about not having the priesthood, or whatever other worldly issues they seem to have taken on. So many fake, insincere women. Truly a sign of the times. (Yes, I know there are still a lot of good, covenant keeping women, but still.)