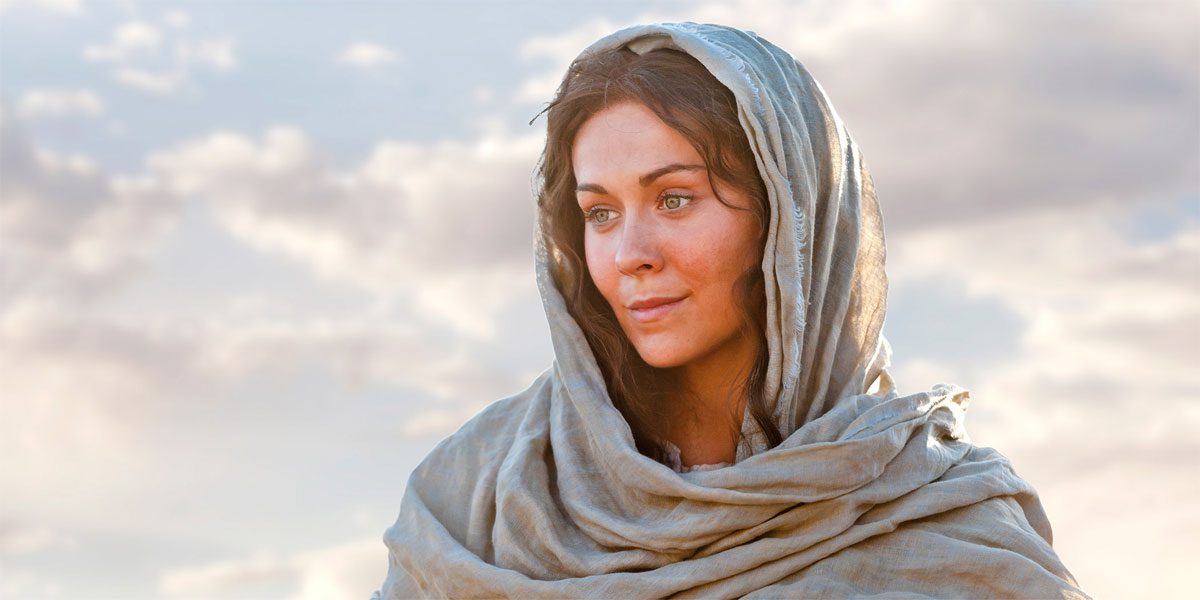 “Yea, it is the love of God, which sheddeth itself abroad in the hearts of the children of men; wherefore, it is the most desirable above all things.” 1 Nephi 11:22

In his vision of the Tree of Life, Nephi beheld a “virgin, most beautiful and fair above all other virgins” (1 Nephi 11:15) who would become “the mother of the Son of God, after the manner of the flesh” (v. 18). Interestingly, while other Book of Mormon prophets clearly identified this virgin as Mary (see Mosiah 3:8; Alma 7:10), Nephi never did. Biblical scholar Matthew Bowen has asked, “Does it not seem strange then that Nephi would leave her name unmentioned, assuming he knew it? Where is her name?”

Bowen proposed that the answer can be found in the meaning of Mary’s name itself, which most likely derives from the Egyptian root mr(i) or mry which means “love” or “desire.”1 Rather than directly stating Mary’s name, it seems that Nephi instead emphasized the meanings of the ancient root word from which her name was likely derived.

When Nephi’s angelic guide asked him if he knew of the “condescension of God,” Nephi responded, “I know that [God] loveth his children; nevertheless, I do not know the meaning of all things” (1 Nephi 11:17–18). Then, after showing Nephi a vision of Christ’s birth, the angel asked, “Knowest thou the meaning of the tree which thy father saw?” Nephi answered, “Yea, it is the love of God” (vv. 21–22). Nephi used the term love twice more in this chapter, explaining that the “waters are a representation of the love of God; and … that the tree of life was a representation of the love of God” (v. 25).2

The word desire also shows up with unusual frequency. The reason Nephi was privileged to behold this vision in the first place was because he “had desired to know the things that [his] father had seen” (1 Nephi 11:1). On several other occasions in this chapter, Nephi’s desire is similarly referenced: “Behold, what desirest thou?” (v. 2; cf. v. 10) … I desire to behold the things which my father saw (v. 3) … wherefore, thou shalt behold the things which thou hast desired (v. 6). Finally, following Nephi’s identification of the Tree of Life as the “love of God” in verse 22, Nephi explained that this love is “the most desirable above all things.”

Thus, on several occasions, the terms love and desire—the probable roots of Mary’s name—are used throughout this chapter. Notably, the only time they are used together in the same verse is when they describe the Tree of Life (1 Nephi 11:22). This seems to be more than a coincidence because there is good reason to associate the Tree of Life with Mary herself.

Just as the Tree of Life bore precious fruit, Mary bore Jesus Christ. Also, the association of the Tree of Life with a holy or divine mother figure was present in ancient Israelite religion.3 By describing the Tree of Life as the “love of God” which was “most desirable above all things,” Nephi linked the sacred Tree with Egyptian root words that either literally or implicitly represented Mary’s name.4 Bowen concluded that with Nephi’s awareness of both Egyptian and Hebrew, his “consciousness of Mary’s name and its meaning plausibly explains and motivates the dramatic emphasis on the ‘love of God’ in 1 Nephi 11 and his understanding of the overall meaning of the tree-of-life vision.”5

This linguistic and textual analysis can help readers see Mary in a new light. According to the prophet Alma, she was “a precious and chosen vessel” (Alma 7:10; emphasis added). This description is meaningful because the fruit that Mary bore—the Son of God—was likewise symbolically described as being “most precious and most desirable above all other fruits” (1 Nephi 15:36; emphasis added).6 Understood this way, Mary’s name appropriately symbolizes her mission to bring to the world the most desirable thing that God can offer—His precious Son, Jesus Christ, who perfectly manifests the Father’s eternal love for all of His children (see John 3:16).

Mary’s role in bringing forth the Son of God was sacred and holy, a gift to all the earth. Likewise, the eternal role of motherhood is sacred and holy for all women who have or will experience its blessings, responsibilities, and gifts of life and love, whether during mortality or in the eternities to come.

Speaking to women in the October 1980 session of General Conference, Mary F. Foulger stated, “We stand in awe at Mary’s assignment to be the mother of the Lord, but we, too, have been called to mother gods. Latter-day Saint women understand that the very purpose of creation depends upon our participation as earthly mothers to the spirit children of God.”7 While Mary is not to be worshipped or prayed to, she is to be honored, revered, and emulated. As Elder Bruce R. McConkie stated, “We should … hold up Mary with that proper high esteem which is hers.”8

Recognizing that Mary’s name is associated with the love of God can help readers remember the eternal worth of all women and mothers.9 It also helps explain why Mary plays such a prominent role in the opening scenes of the Gospels of Matthew and Luke, as well as in Nephi’s vision of the Tree of Life. What better way to emphasize God’s love than by drawing attention to Christ’s mother, who by the very meaning of her name was love personified and who brought forth the most desirable gift of God? It appears that by using the root meanings of Mary’s name, instead of the name itself, Nephi subtly drew attention to her divinely appointed role to bring forth and raise the Christ Child.

Matthew Bowen, “‘Most Desirable Above All Things’: Onomastic Play on Mary and Mormon in the Book of Mormon,” Interpreter: A Journal of Latter-day Saint Faith and Scholarship 13 (2015): 27–61.

1.See Matthew Bowen, “‘Most Desirable Above All Things’: Onomastic Play on Mary and Mormon in the Book of Mormon,” Interpreter: A Journal of Latter-day Saint Faith and Scholarship 13 (2015): 33–34. As far as the technical derivation of this name and its general acceptance as being derived from an Egyptian root, Bowen explained,The name “Mary” (from “Miriam”; New Testament “Mariam” or “Maria”) still makes best sense as an Egyptian theophoric hypocoristicon, deriving from the Egyptian root mr(i) or mry which as a verb means to “love, … want, wish, desire” and as a noun (mr[.wt]) means “love, … will, desire,” rather than as a derivation from Mara, “bitter” from Ruth 1:20. “Mary” or “Miriam” in Egyptian, like David in Hebrew, means “Beloved,” i.e., “beloved of the god.” James K. Hoffmeier writes: “Although there are many linguistic explanations for the final mem [m in Miriam/Mariam], there is agreement that mary is the proposed writing of the root mry, meaning ‘love’ or ‘beloved.’”In Judeo-Aramaic, Mary’s name would have been Maryam, which was thought in antiquity to mean “rebellion,” “bitter sea,” “mistress,” “exalted one,” “ruling one,” or “beautiful.” See “Miriam (given name),” online at wikipedia.org, accessed June 5, 2019.

2.Bowen noted that water “of course, is a powerful symbol both of birth and rebirth.” Bowen, “‘Most Desirable Above All Things’,” 40. Thus, like the Tree of Life, the Waters of Life could symbolically relate to Mary’s role to give birth to the Son of God.

4.Bowen explained, “if the terms ‘love’ and ‘desire’ appear in Egyptian language on the plates, both words would almost certainly be written as forms of mr(i), thus literally placing her name in the text. … Even the use of the Hebrew equivalents of the terms ‘love’ and ‘desire’ would cognitively revolve around the appearance of ‘the mother of God’ in Nephi’s text.” Bowen, “‘Most Desirable Above All Things’,” 39.

6.The description of the fruit of the Tree of Life as being “most desirable” seems to be connected to the gift of charity, which Mormon described as being “greatest of all” (Moroni 7:46). Notably, it has also been proposed that Mary may mean “gift (of God).” Koehler, Ludwig, and Walter Baumgartner, The Hebrew and Aramaic Lexicon of the Old Testament, 5 vols. revised by W. Baumgartner and Johann J. Stamm (Leiden: Brill, 1994, trans. of 5-volume 3rd German edition) 635–636; as cited in “Mary,” Book of Mormon Onomasticon, ed. Paul Y. Hoskisson, accessed June 5, 2019, online at onoma.lib.byu.edu. This possibility is interesting considering that 1 Nephi 15:36 describes the fruit of the Tree of Life as “the greatest of all the gifts of God” (emphasis added).

9.If “the worth of souls is great in the sight of God,” (Doctrine and Covenants 18:10), then the calling to bring forth God’s precious spirit children into mortality must also be of great worth.

Is there any connection between "Mary" in the New Testament, and "Marah" (meaning "bitterness") in the Old Testament (Exodus 15:23) ?