Why Did the Servants Present Lamoni with the Arms of His Enemies? | Meridian Magazine 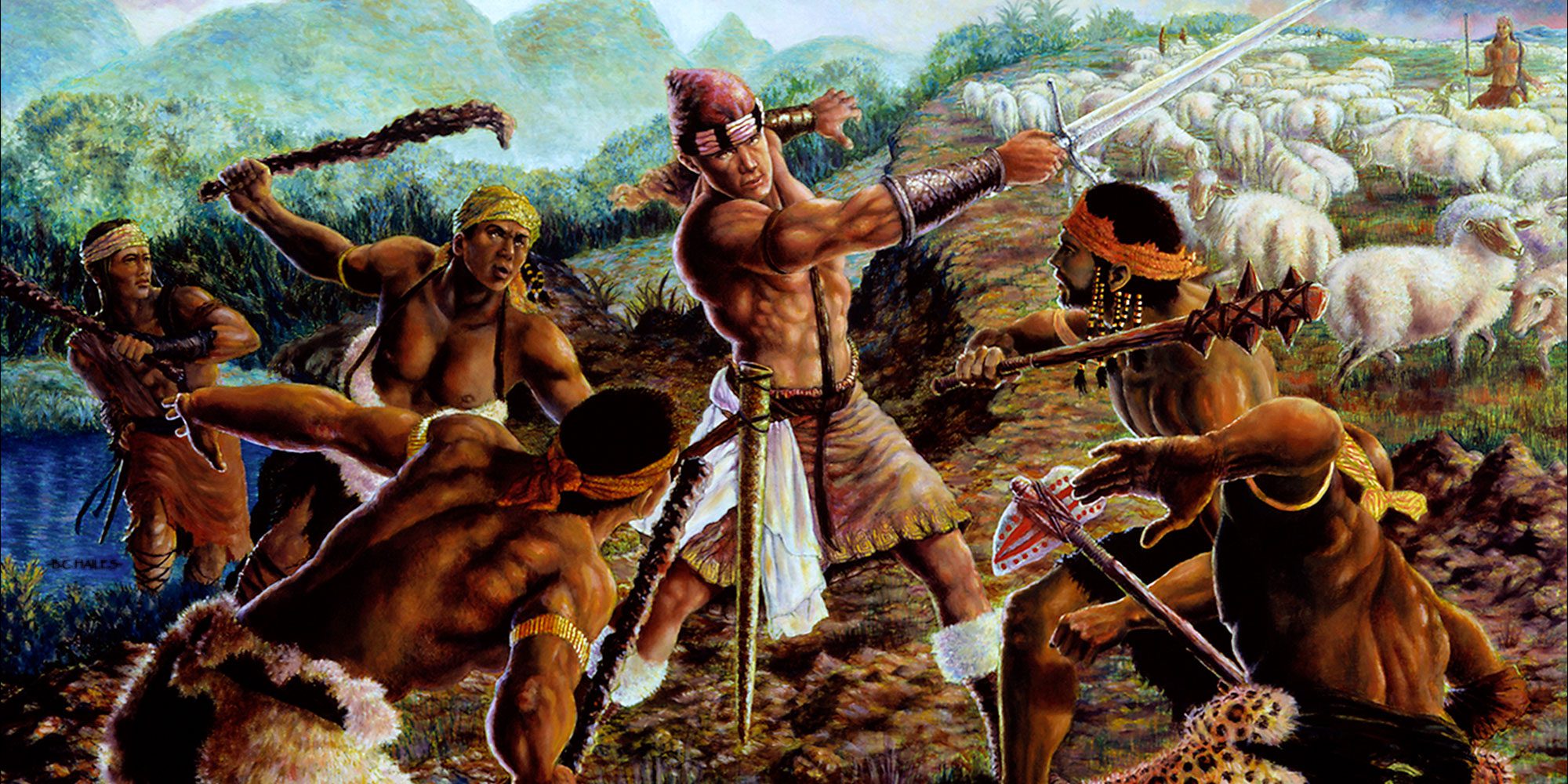 Why Did the Servants Present Lamoni with the Arms of His Enemies?

“[The servants] went in unto the king, bearing the arms which had been smitten off by the sword of Ammon, of those who sought to slay him; and they were carried in unto the king for a testimony of the things which they had done” (Alma 17:39).

Hugh Nibley observed, “The whole affair at the waters of Sebus must strike anyone as very strange.”[1] Few details are stranger, perhaps, than envisioning Ammon’s fellow servants bringing a pile of severed arms to present to the king. Ammon had consciously “slew none with the sword save it were their leader” (Alma 17:38),[2] but he “smote off their arms with his sword,” seemingly with a single blow (v. 37).[3] The servants then diligently took the arms “unto the king … for a testimony of the things which they had done” (v. 39).

One recent reader has proposed that “arms” should be interpreted as weapons,[4] in part because “the image of a servant dragging a blood-soaked bag across the floor of the king’s palace in order to show him the gory amputated limbs of his enemies seems somewhat fanciful.”[5] Yet, a pair of LDS scholars long ago noted, “The practice of cutting off the arms or other body parts of enemies, specifically as a testimony of the conquest of victims, is attested in the ancient Near East.”[6] The severed body parts (typically heads or hands) would then be “sent on as evidence and trophies of the success” of a warrior in battle.

Ancient depictions[7] show soldiers “heaping them up in triumph,” in order to tally the dead or to entitle mercenaries to be paid. This was, according biblical scholars Cyrus Gordon and Gary Rendsburg, “a routine procedure all through the ancient Near East,” and “symbolized victory in battle.”[8] Judges 7:25 and 8:6 indicate that the early Israelites engaged in such practices, which are well attested in Egyptian, Canaanite, and Mesopotamian sources.[9]

Switching over to the New World,[10] in the Popul Vuh, the ancient traditions of the Quiché Maya,[11] the mythic hero twins fight the bird-demon Seven Macaw. During the conflict, one of the twins attempted to grab Seven Macaw, “but instead Seven Macaw tore off the arm” of the twin, went home and “hung the arm” over the fire, “until [the twins] come to take it back.”[12] This story is depicted on Izapa Stela 25, complete with hero twin’s severed arm, which dates to ca. 300–50 BC.[13] Although mythological, the tale likely reflects actual Maya attitudes and practices in war and conflict.

Although much later than the time of Ammon, there is also some indication of similar practices among the Aztecs.[14] In the account of the Mexican conquest left by conquistador Bernal Díaz, “Aztec warriors held aloft the severed arms of the victims as they taunted and threatened the Spanish and their native allies who were within earshot.”[15] Díaz specifically stated that the Aztecs “threw them roasted legs of Indians and the arms of our soldiers” and jeered, “Eat of the flesh of … your brothers.”[16]

Like the ancient Near East, these Aztec and Maya sources portray the severed arms of an enemy as “a trophy of their valor.”[17] The limbs are used to boast in one’s prowess as a warrior, taunt one’s enemies, and prove one’s bravery and achievements.

In light of these ancient Near Eastern and Mesoamerican practices, the servants bringing the severed arms to King Lamoni as “a testimony” of the events they witnessed seems far less fanciful than at first glance. Instead, it would appear that “the astounded servants of King Lamoni, who took the arms that Ammon had been cut off into the king” were acting conventionally, according to custom.[18]As one would expect, the pile of “war trophies” greatly impressed King Lamoni. He was “astonished exceedingly” to the point that he suspected Ammon was “more than a man” (Alma 18:2). The servants were convinced “he cannot be slain by the enemies of the king” (v. 3).

The unusual part of the story is that Ammon did not bring the arms himself to the king to prove how great a warrior he was. As Robert L. Millet and Joseph Fielding McConkie pointed out, “Ammon, whose power was heaven-sent, sought no honor for himself.”[19] This fact is made all the more apparent by understanding the honor and glory he could have sought with the arms of his enemies as proof of his great strength. As John Lundquist and John Welch have further reasoned, “the fact that the evidence was presented to the king, which could have entitled him to payment, heightens all the more the fact that Ammon sought no recognition or reward.”[20]

With this background in mind, Ammon’s own words to his brother Aaron take on greater significance: “I do not boast in my own strength, … but I will boast in the strength of my God” (Alma 26:11–12). Ammon had ample opportunity to boast in his own strength after the episode at the Waters of Sebus. Instead, Ammon went about doing as he had been told, feeding the king’s horses, which further impressed King Lamoni (Alma 18:9–11).

The Lord’s blessings were poured out upon Ammon because he acknowledged God’s hand in all things. His humility, combined with the powerful impact of those arms as undeniable proof of his greatness in their cultural expectations, no doubt contributed to why Ammon was able to “convert a king and, through him, a people.”[21]

John M. Lundquist and John W. Welch, “Ammon and Cutting Off the Arms of Enemies,” in Reexploring the Book of Mormon: A Decade of New Research, ed. John W. Welch (Salt Lake City and Provo, UT: Deseret Book and FARMS, 1992), 180–181.

[1] Hugh Nibley, The Prophetic Book of Mormon, The Collected Works of Hugh Nibley, Volume 8 (Salt Lake City and Provo, UT: Deseret Book and FARMS, 1989), 539. See pp. 539–542 for Nibely’s discussion of this strange event in the context of Aztec sports. Brant A. Gardner, Traditions of the Fathers: The Book of Mormon as History (Salt Lake City, UT: Greg Kofford Books, 2015), 285–289 likewise discusses the strangeness of the episode and contextualizes it with a Mesoamerican background.

[2] This is a conjectured reading from Royal Skousen, ed., The Book of Mormon: The Earliest Text (New Haven, CT: Yale University Press, 2009), 342. The current LDS edition reads: “he slew none save it were their leader with his sword.” In the printer’s manuscript (the earliest surviving version of this text), “with t/his sword” is written in as a supralinear emendation from Joseph Smith in 1837. See Royal Skousen and Robin Scott Jensen, eds., Revelations and Translations—Volume 3, Part 1: Printer’s Manuscript of the Book of Mormon, 1 Nephi–Alma 35, The Joseph Smith Papers (Salt Lake City, UT: Church Historians Press, 2015), 446–447. For Skousen’s reasons for emending the text, see Royal Skousen, Analysis of Textual Variants of the Book of Mormon, Part 3: Mosiah 17–Alma 20, The Critical Text of the Book of Mormon, Volume 4 (Provo, UT: FARMS, 2006), 1972–1975.

[3] Military historian William J. Hamblin, writing with Brent J. Merrill, described the technique required to sever an arm, and concluded, “Ammon’s sword technique makes perfect sense.” William J. Hamblin and Brent J. Merrill, “Swords in the Book of Mormon,” in Warfare in the Book of Mormon, ed. Stephen D. Ricks and William J. Hamblin (Salt Lake City and Provo, UT: Deseret Book and FARMS, 1990), 335–347, quote on p. 337, followed by a lengthy discussion of the razor-sharp obsidian bladed macuahuitl used in Mesoamerica in pre-Columbian times, esp. p. 341. In agreement is Brant A. Gardner, Second Witness: Analytical and Contextual Commentary on the Book of Mormon, 6 vols. (Salt Lake City, UT: Greg Kofford Books, 2007), 4:280, who echoes, “Could a blow from a macuahuitl sever an arm? According to a report from Titulo C’oyoi, created by Quiché during the Spanish conquest, a blow of a macuahuitl severed a horse’s head during battle sometime between 1523 and 1527. Certainly decapitating a horse would have been more challenging than severing the human arm.”

[6] John M. Lundquist and John W. Welch, “Ammon and Cutting Off the Arms of Enemies,” in Reexploring the Book of Mormon: A Decade of New Research, ed. John W. Welch (Salt Lake City and Provo, UT: Deseret Book and FARMS, 1992), 180.

[7] C.L. Crouch, War and Ethics in the Ancient Near East: Military Violence in Light of Cosmology and History (Berlin: Walter de Gruyter, 2009), 120–121, notes that in ancient Near Eastern depictions, severed heads “are frequently shown held high in triumph” and “are presented to the king” as “war trophies or proofs of success.”

[11] Generally dated to the mid-16th century, “Many of the myths outlined in the text have antecedents in the art and religious beliefs of the people of Mesoamerica dating back some two thousand years prior to the transcription of the manuscript by its K’iche’ authors.” Allen J. Christenson, trans. and ed., Popol Vuh, The Mythic Sections—Tales of First Beginnings From the Ancient K’iche’-Maya, Ancient Texts and Mormon Studies, no. 2 (Provo, UT: FARMS, 2000), 25. Christenson would go on to say, “There is value, therefore, in careful reading of the text from an LDS perspective, in that it reveals ancient theological concepts current among the people of Mesoamerica at a time contemporaneous with Book of Mormon history” (p. 25).

[12] Christenson, Popol Vuh, The Mythic Sections, 59. Compare Dennis Tedlock, Popol Vuh, The Definitive Edition of the Mayan Book of the Dawn of Life and the Glories of Gods and Kings (New York, NY: Simon and Schuster, 1986), 92.