Why Did the Nephites Stay in Their Tents During King Benjamin’s Speech? | Meridian Magazine 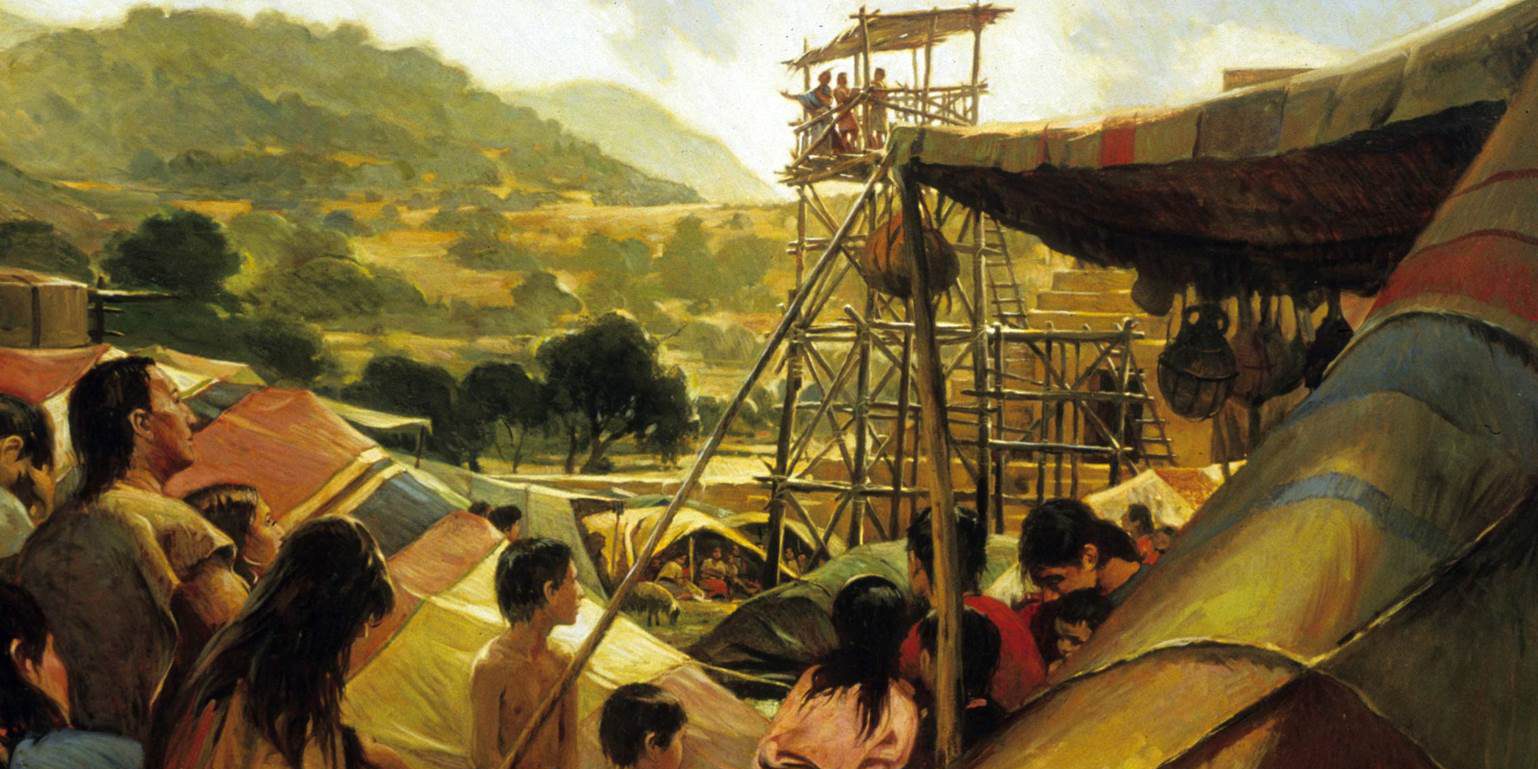 Why Did the Nephites Stay in Their Tents During King Benjamin’s Speech?

“And they pitched their tents round about the temple, every man having his tent with the door thereof towards the temple, that thereby they might remain in their tents and hear the words which king Benjamin should speak unto them” (Mosiah 2:6).

Following King Benjamin’s proclamation, his people gathered together from throughout the land of Zarahemla to go up[1] to the temple to hear the words of their king (Mosiah 2:1). As they congregated around the temple with their families, the people set up tents for their families, each tent having its door open towards the temple. The people remained in their tents as they listened to King Benjamin speak (Mosiah 2:5–6).

The reason why they did this is not explained in the text. Mosiah 2:7 explains that the multitude was so great that Benjamin had to have a tower constructed so that his voice would reach more people. It seems that this problem could have been partially prevented by the gathered families setting up their tents elsewhere and gathering themselves in closer to the temple, without the tents. Why did they have to remain in their tents?

LDS scholars have argued that this gathering at the temple to hear a speech was no ordinary occasion, but that the account in Mosiah 2–6 closely resembles what we know about ancient Israelite temple pilgrimage festivals.[2] One of the most important of these, and one which has many parallels to King Benjamin’s temple gathering, is the Feast of Tabernacles (Sukkot in Hebrew). The following chart illustrates some of the interesting similarities:

If King Benjamin’s speech in Mosiah 2–6 took place as part of a Nephite celebration of the ancient Israelite Feast of Tabernacles, that would explain many of the elements described in the narrative as found in the Book of Mormon, including the details regarding the setting up of tents around the temple and the people remaining in them to hear their king speak.

It is evident in Benjamin’s speech that the tents are ceremonially significant.… Everyone had a tent, not just those who had come from out of town and needed a place to stay. Furthermore, they all remained in their tents during the speech, surely for ceremonial reasons. If it had not been religiously and ritually important for them to stay in their tents, the crowd could have stood much closer to Benjamin and been able to hear him, obviating the need for written copies of his words to be prepared and circulated (see Mosiah 2:8). Apparently Benjamin considered it more important for the people to remain in their tents than to have them stand within close hearing distance of the speaker.[4]

The ancient Israelites were commanded to build ceremonial booths, temporary shelters made from tree branches (see Leviticus 23:40), as part of the celebration of the Feast of Tabernacles. According to Leviticus 23:42–43, the Lord commanded: “Ye shall dwell in booths seven days; all that are Israelites born shall dwell in booths: so that your generations may know that I had the sons of Israel live in booths when I brought them out from the land of Egypt.” The Lord wanted His people to remember what their forefathers had gone through and how He, their God, had delivered them from bondage and from their afflictions.

Szink and Welch further explain, regarding the Nephite gathering: “To the Nephites, their festival use of tents may also have symbolized the time when Lehi and his family had ‘dwelt in a tent’ (1 Nephi 10:16), for Benjamin convenes his celebration in part to remember the distinctiveness of his people, whom ‘the Lord God hath brought out of Jerusalem’ (Mosiah 1:11).”[5] The idea of remembering is a key factor in covenant renewal and in living the gospel, as we see in King Benjamin’s speech, where he speaks of “remembering” fifteen times.[6]

Remembering our covenants is not only important to King Benjamin, but also to the Book of Mormon as a whole. One of the expressed purposes of the book, as Moroni outlined on the title page of the book, is to help readers to remember “the covenants of the Lord, that they are not cast off forever.” Just as the Israelites and Nephites built booths/tents to remind them of what God had done for their forefathers and the covenants he had made with them, so we have the Book of Mormon, the Temple, and so many things that can serve as reminders to us as well. From King Benjamin’s counsel, we can learn that “remembering” our promises to the Lord will turn our thoughts and actions to him. As the children of Israel in the wilderness and the Nephites in the promised land learned, if we “remember” the Lord, we can find shelter from life’s storms.

The ancient Greeks supposedly sang those old Greek plays in their big theaters and the Israelites also are known to have sung in their meetings. An opera - trained singer is able to sing for hours with no strain on their voice nor lungs ,etc. whereas a modern "belt" singer is quite apt to develop many throat problems because of the unnatural strain on one's vocal chords ,etc. one can project the voice quite far with traditional voice:-training and be heard quite far without the need of microphones and amplifiers. I believe Michael Ballam has said these same things. So. Could our wonderful King Benjamin be doing what was customary in those days and sang his message?

Along with these excellent links of Old Testament teaching, there may have been another simpler additional explanation: Sun and/or rain or both.