Why Did the Nephites Preserve Some Items as “National Treasures”? | Meridian Magazine 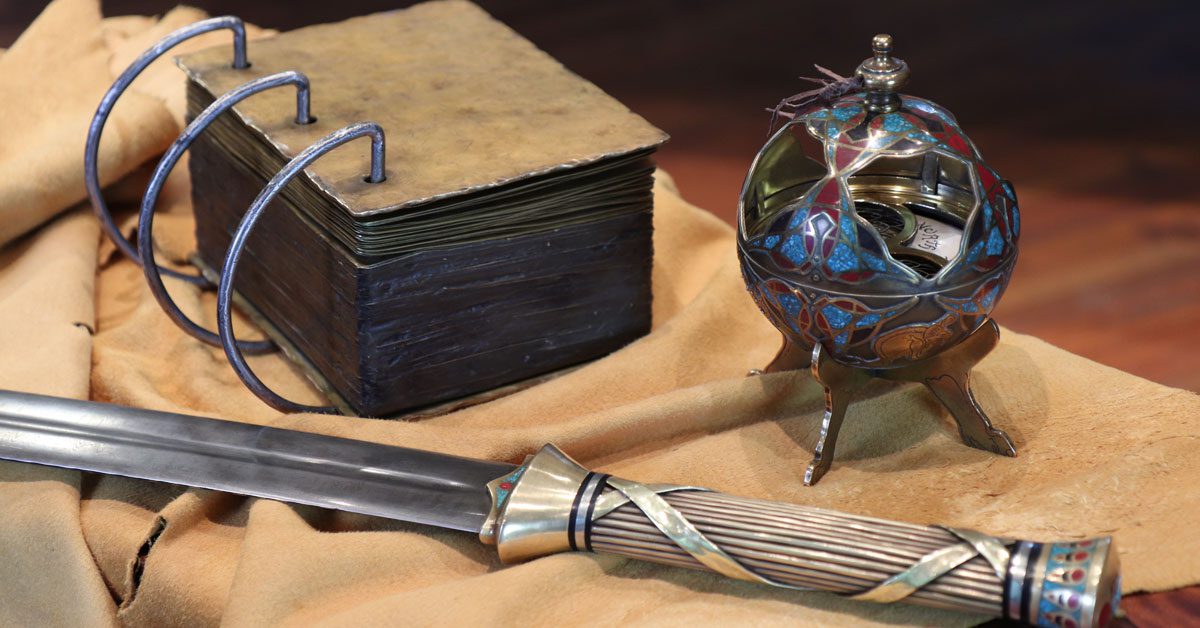 “And moreover, he also gave him charge concerning the records which were engraven on the plates of brass; and also the plates of Nephi; and also, the sword of Laban, and the ball or director, which led our fathers through the wilderness, which was prepared by the hand of the Lord that thereby they might be led, every one according to the heed and diligence which they gave unto him.” Mosiah 1:16

As reported in the Book of Mormon, certain objects were passed down from generation to generation by the Nephite leaders. As King Benjamin gave his son Mosiah “charge concerning all the affairs of the kingdom” (Mosiah 1:15), he also “gave him charge concerning the records which were engraven” on both the plates of brass and the plates of Nephi, along with “the sword of Laban, and the ball or director” which led Lehi and his family in the wilderness (Mosiah 1:16). A generation later, Mosiah “took the plates of brass, and all the things which he had kept … yea, all the records, and also the interpreters,” and “conferred them upon Alma” (Mosiah 28:20). Alma later entrusted the records, the interpreters, and the Liahona (the ball or director) to his son Helaman (Alma 37).

Hugh Nibley described these items as the Nephite “national treasure.”1 For kings like Benjamin and Mosiah, these treasures enhanced and validated their legitimacy in several important ways. As Gordon Thomasson noted, the plates of brass and other Nephite records provided the genealogical proof of their right to rule by legitimate decent from Nephi.2 In addition, swords, such as the sword of Laban, served as important symbols of kingly powers and authority in various world cultures throughout the ages, from antiquity to modern times.3 Another symbol of royal authority among medieval kings, going back to ancient Roman, Greek, and Babylonian precedents, was an orb representing the world—something the Liahona, or “ball” naturally parallels.4

Traditionally, such regalia were displayed on important occasions, such as coronations and marriages. The sword represented power, the book symbolized the monarch’s wisdom and law, and the ball stood for the king’s expansive jurisdiction over his domain. Because ancient rulers usually traced their source of power back to God, these three icons reflected the omnipotence, omniscience, and omnipresence of the Heavenly King. The earthly king was viewed as the Heavenly King’s steward in the mortal realm.

Thus, the passing of these items from King Benjamin to Mosiah is directly connected with the formal transfer of royal rights, responsibilities and authority from the aged king to his heir.5 A generation later, Mosiah abolished the kingship, but he still passed these items on to Alma, the first chief judge, thus substantiating the transfer of full authority to Alma under the new political “reign of judges” (Mosiah 28:20; 29:42).

The importance of these items, however, was not limited to the realms of political power. It is clear that these were sacred items that held religious, military, and legal significance as well.6 Don Bradley argued that these artifacts were high priestly objects connected to the Nephite temple, parallel to the sacred objects stored in the Ark of the Covenant in the Israelite temple.7 Thus, after Alma gave up the judgment-seat (Alma 4:16–19), as the high priest he evidently maintained these items and passed them on to his son Helaman (Alma 37).8

It’s not hard to recognize why records like the plates of brass and the plates of Nephi were important to Nephite leaders and passed on from generation to generation. Not only did these records preserve the Lord’s word and will, but as noted they documented the genealogy of Nephite leaders, establishing them as descendants of Nephi and thus heirs to his role as ruler and teacher over them. But what gave items like the sword of Laban and the Liahona both royal and religious importance?

The sword of Laban was obtained with the plates of brass, and was in fact the instrument by which they were obtained (1 Nephi 4:8–24).9 The story of Nephi slaying Laban and obtaining the plates of brass was written to demonstrate that the Lord had appointed him to be the ruler and teacher of the Lehites after Lehi passed away.10 Thus, it is natural that the sword of Laban—the means by which Nephi accomplished the Lord’s purposes on that occasion—would become a symbol of Nephi’s divinely given authority, passed down through his descendants, such as Benjamin and Mosiah.11 Indeed, as the military leader of his people, King Benjamin used the sword of Laban in winning a victory over the armies of the Lamanites (Words of Mormon 1:13).

The Liahona appeared outside Lehi’s tent door (1 Nephi 16:10), and was “prepared … by the hand of the Lord” (2 Nephi 5:12).12 It provided divine direction to Lehi’s family in the wilderness, and was also a means for God to reveal his will to Lehi’s family, especially where in the world they should go (1 Nephi 16:26–30).13 The Liahona also plays a central role in Nephi’s successful hunting expedition when the family desperately needed food—another account written to illustrate and strengthen his divine selection as the next leader of the group after Lehi.14

Thus, the plates of brass, the sword of Laban, and the Liahona were part of the foundational narratives of the Nephite people. They each symbolized the Lord’s divine guidance and deliverance of Lehi’s family in the wilderness, but were also traditionally associated with Nephi’s status as the divinely appointed heir after Lehi passed away. They naturally became cultural emblems of the right to lead the people politically and spiritually.

Eventually, these Nephite national treasures were buried with the golden plates, which Joseph Smith recovered on September 22, 1827.15 The Three Witnesses were permitted to see the sword of Laban, the Liahona, and the other sacred items of the Nephite treasury along with the seeing the plates (D&C 17:1). Thus, Joseph Smith for a time had become the rightful custodian of these sacred objects, and the witnesses verified that Joseph was telling the truth about the Nephite treasures.

As legal historian Paul D. Callister explained, “The whole of the Nephite and Jaradite regalia and oracular objects operate to bear symbolic testimony of the Book of Mormon and Joseph Smith’s authority as a seer.”16 Since these items signified divine authority and legitimacy among the Nephites, Joseph’s possession of them provided the evidence that he was truly the Lord’s servant—just as Nephi, Benjamin, Mosiah, Alma, and all other previous custodians had been—chosen to bring forth the Nephite records, restore the gospel of Jesus Christ, and establish the true Church of Jesus Christ once more upon the earth.

2.Gordon C. Thomasson, “Mosiah: The Complex Symbolism and Symbolic Complex of Kingship in the Book of Mormon,” Journal of Book of Mormon Studies 2, no. 1 (1993): 26.

8.See Bradley, Lost 116 Pages, 202–203. Gardner, Second Witness, 3:468 argues that when political and religious authority were split into separate offices, the national treasures were divided between religious and political authority as well, with the sword of Laban and the Liahona passing along political lines and the sacred records and interpreters passing along religious lines. If this is correct, the dividing of the objects would have happened when Alma stepped down from the judgment-seat in Alma 4:16–19, and not in Mosiah 28:20, when Mosiah conferred “all the things which he had kept” upon Alma, and then appointed Alma chief judge (Mosiah 29:41), thus consolidating religious and political authority into a single individual. Furthermore, it seems likely that the Liahona was passed along religious lines from that point on, as Alma mentions it while in the act of conferring the records upon his son Helaman (Alma 37:38). It is possible, however, that the sword of Laban continued to be passed down along political lines, as it goes unmentioned by Alma.

12.Noting that God often works through human hands, Timothy Gervais and John L. Joyce, “‘By Small Means’: Rethinking the Liahona,” Interpreter: A Journal of Mormon Scripture 30 (2018): 211–213 suggest that Ishmael was ultimately the source of the Liahona, giving it to Lehi as a part of the bridal dowry.