Why Did the Nauvoo City Council Order the Destruction of the Nauvoo Expositor Press? | Meridian Magazine 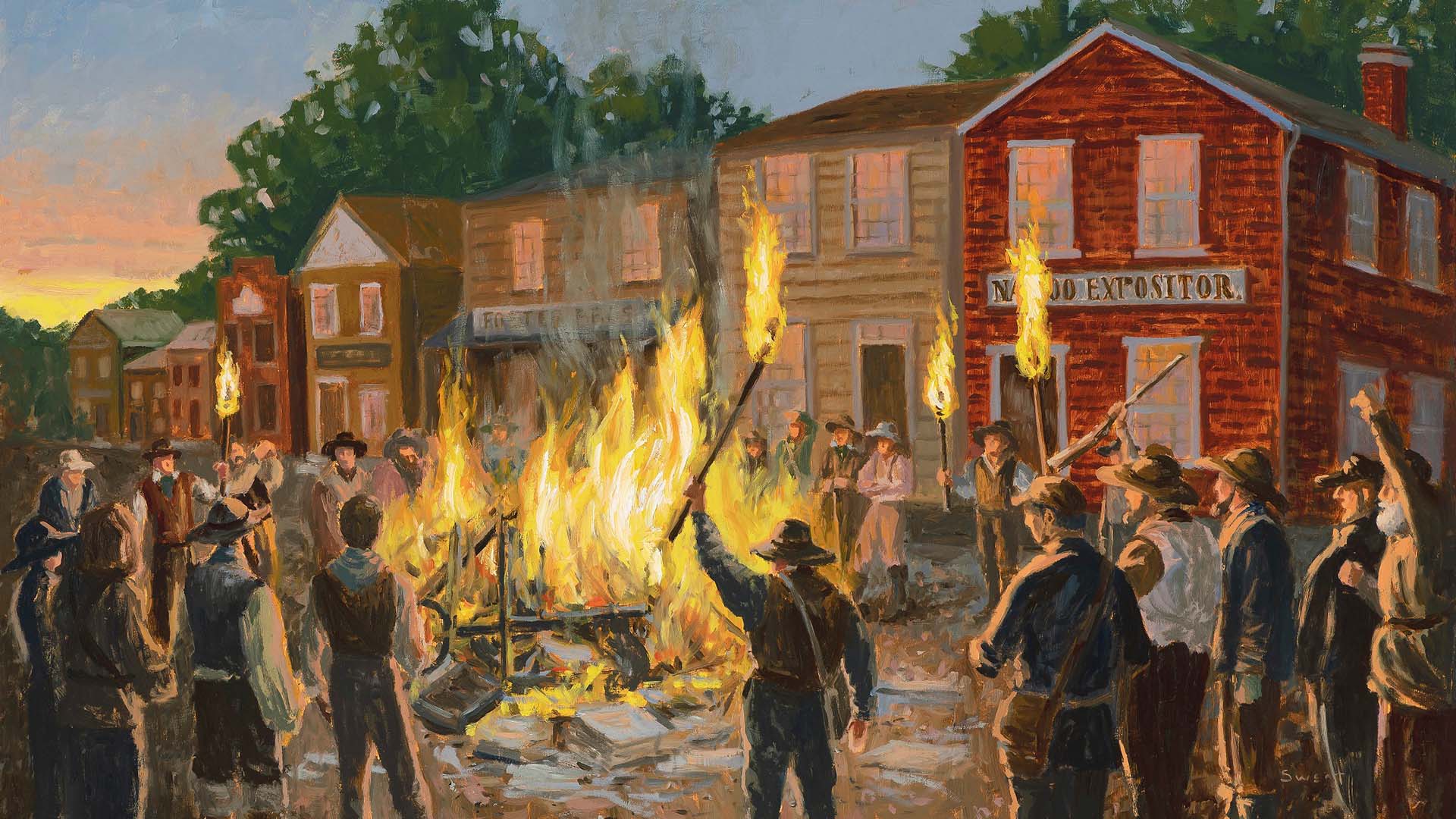 Why Did the Nauvoo City Council Order the Destruction of the Nauvoo Expositor Press?

“They were innocent of any crime, as they had often been proved before, and were only confined in jail by the conspiracy of traitors and wicked men.” Doctrine and Covenants 135:7

On June 7, 1844, dissenters from The Church of Jesus Christ of Latter-day Saints published the first and sole issue of the Nauvoo Expositor, making several inflammatory charges against the city of Nauvoo and the leaders of the Church. After two days of investigation and deliberation, the Nauvoo City Council, led by Mayor Joseph Smith, ordered the destruction of the paper’s printing press. Twenty days later Joseph and Hyrum Smith were assassinated in Carthage Jail.1 Although many other factors were planned and brought into play by various people who opposed the Church, the publication of the Expositor was the most explosive and premeditated factor leading to the arrest and murder of Joseph and Hyrum. Here is a closer look at what happened in the opening stage of the Expositor’s role in this sordid affair.2

The Expositor had its origins in the turbulent spring of 1844 when William Law, a counselor in the First Presidency; his brother Wilson, a general in the Nauvoo Legion; Francis M. Higbee; and other dissenters in the Church were excommunicated. These men sought to remove Joseph Smith as the President of the Church, and when that failed, they formed their own church. One of their first actions was acquiring a press to publish the Nauvoo Expositor. It proposed to “give a full, candid, and succinct statement of FACTS AS THEY REALLY EXIST IN THE CITY OF NAUVOO.”3 Most of its substance, however, was devoted to inflammatory attacks on Joseph and Hyrum Smith and other leaders of the Church in Nauvoo. The Expositor’s attacks came primarily on three different fronts: religion, politics, and morality.

The writers in the Expositor proclaimed that Joseph Smith was a fallen prophet and believed his recent teachings were “heretical and damnable in their influence.”4 They charged that Joseph, Hyrum, and other Church leaders had “introduced false and damnable doctrines into the Church, such as a plurality of Gods above the God of the universe, and his liability to fall with his creations; the plurality of wives, for time and eternity; the doctrine of unconditional sealing up to eternal life, against all crimes except that of shedding innocent blood.”5

The charges made in the Expositor are a mixture of truth and exaggerated falsehoods. Joseph had recently introduced new teachings about the nature of God in the King Follet discourse and other sermons.6 He had also begun introducing and permitting eternal marriage, including plural marriages, to a small number of close associates.7 Recognizing the controversial nature of plural marriage, the teachings were kept private because such personal matters were not punishable under Illinois law unless they were “open and notorious.”8 The teaching of being sealed up to eternal life was also introduced—with conditions. All these teachings are found in various places in scripture, primarily in the Holy Bible, which Joseph quoted at length when introducing the teachings.

The Expositor also radically and dangerously advocated for political leaders in the state and county who would “go for the unconditional repeal of the Nauvoo Charter.”9 The Nauvoo Charter, enacted by the Illinois state legislature, established the political, judicial, and educational structures within the city and provided for the creation of the Nauvoo Legion, a militia of local citizens that was intended to protect the Saints against the kinds of persecution they had suffered in Missouri and elsewhere. They relied on the charter “to be an unbreachable wall defending the rights of Zion.”10 Repealing it would leave the Saints with little legal recourse to protect themselves against all kinds of persecutions.11

On Saturday, June 8, 1844, the Nauvoo City Council met for a total of six and a half hours in two different sessions. They met again on Monday, June 10, for an additional seven and a half hours.12 During the meetings, Joseph Smith expressed a concern voiced by several other council members that the Expositor’s publication was “calculated to destroy the peace of the city.—and it is not safe that such things should exist—on account of the mob spirit, which th[e]y tend to produce.”13

A large part of the city council’s discussions centered around whether the Expositor met the legal definition of a public nuisance. Passages from the Expositor were read and analyzed. John Taylor declared that no city on earth would bear such slander. He read excerpts from the United States Constitution on freedom of the press and then said, “We are willing they should publish the truth, but the paper is a nuisance, and stinks in the nose of every honest man.”14 Taylor “spoke decidedly in favor of active measures.”15

During their deliberations, the council consulted Blackstone’s Commentaries on the Laws of England, a respected law text from the time. They eventually concluded that the Expositor fit the definition of a public nuisance, citing a passage from Blackstone’s defining nuisance as “any thing that disturbs the peace of a community,” stressing that “the whole community has to rest under the stigma of these falsehoods.”16 Joseph Smith also read from the Illinois Constitution, Article 8, Section 12, “touching the responsibility of the press for its constitutional liberty.”17

A clear theme that emerged in the discussions was the worry that if the Expositor continued, the persecutions seen in Missouri would be repeated in Nauvoo. Councilor Phineas Richards was quoted as saying that “he had not forgotten the transactions at Hawn’s mills [sic], and that … he could not sit still when he saw the same spirit raging in this place.”18

At 6:30 p.m. on Monday, June 10, 1844, the council resolved that the Nauvoo Expositor was a public nuisance and ordered the destruction of its press. Acting in his duty as mayor, Joseph Smith issued an order to the town marshal to destroy the Expositor’s press and any undistributed issues. The marshal, accompanied by a group of citizens and members of the city’s militia, served the order and destroyed the press.

Joseph Smith and the city council made no attempt to cover up their actions or their reasons for them. Joseph clearly laid out their reasons in a letter written to Illinois governor Thomas Ford just days after the council’s deliberations,19 and a few weeks later, the minutes of the city council meetings were published in a local newspaper, The Nauvoo Neighbor.20 According to John Taylor, Joseph Smith also told Ford, “Our whole people were indignant, and loudly called upon our city authorities for a redress of their grievances which if not attended to, they themselves would have taken the matter into their own hands and have summarily punished the audacious wretches.”21 Joseph thus implied that by destroying the press, the town council prevented a greater riot, where the press would have been destroyed anyway, possibly with greater property damage and loss of life.

Was the destruction of Expositor press illegal? As a law professor, President Dallin H. Oaks studied the question, noting, “[Latter-day Saints] have generally apologized—including official Mormon historians—for the destruction of the newspaper, deeming it an interference with the freedom of the press, a sacred American Constitutional right.”22 However, during his research, President Oaks found that given the historical context of the time, the case is more complicated than it initially appears. In an interview, President Oaks noted:

I found as I researched this according to the law of Illinois and the United States in 1844 (the year this took place), was that the freedom of the press in the First Amendment did not apply to state action or to city action at that period. It only came to apply to state action or city action by the amendments adopted after the Civil War, the 14th Amendment, and it was so declared by the United States Supreme Court in the 1930s in a 5–4 decision. Well, if it took the United States Supreme Court 100 years to declare that the freedom of the press protected the press against city or state action, [I can easily sympathize with] the people that struggled with that issue in 1844 in Illinois, a time when history shows us a lot of newspapers were destroyed on the frontier, mostly along abolitionist issues, pro-slavery or anti-slavery.

President Oaks summarized, “It seems to me like it’s pretty extreme to say that Joseph Smith and his associates were violating the freedom of the press by what they did. They debated for two days, they fell back on Blackstone, they had no other precedents, and they thought it was legitimate to abate a nuisance, including a newspaper that they thought could bring death and destruction upon their city.”23

The destruction of the Expositor was not a rash decision made quickly in the heat of the moment. Nor was it an illegal decision given the laws of the time. The documents from the time show the choice was made after hours and days of agonizing discussion about the right course of action. From the documentary record, it appears that Joseph Smith and the city council acted legally to destroy the Expositor press out of a desire to protect the city from a worse fate.

George Laub, a resident of Nauvoo, noted a speech in his journal in which Joseph Smith explained the actions of the city council, writing, “Bro Joseph called a meeting at his own house and told the people or us that God showed him in an open vision in daylight that if he did not destroy that press, Printing press, it would cause the Blood of the Saints to flow in the Streets & by this wise that Evil destroy. And I write what I know and seen & heard for myself.”24

3.Prospectus of the Nauvoo Expositor, p. 1; emphasis in original.

17.“Revised Minutes, 17 June 1844,” p. [1], online at josephsmithpapers.org. Although not mentioned in the minutes, city council members were surely aware of recent precedents of destroying morally offensive or excessively local printing presses in other cities in Missouri and Illinois—notably in Independence, Missouri, and in Alton and Springfield, Illinois.