Why did the Lamanites Sacrifice Women and Children to Idols? | Meridian Magazine 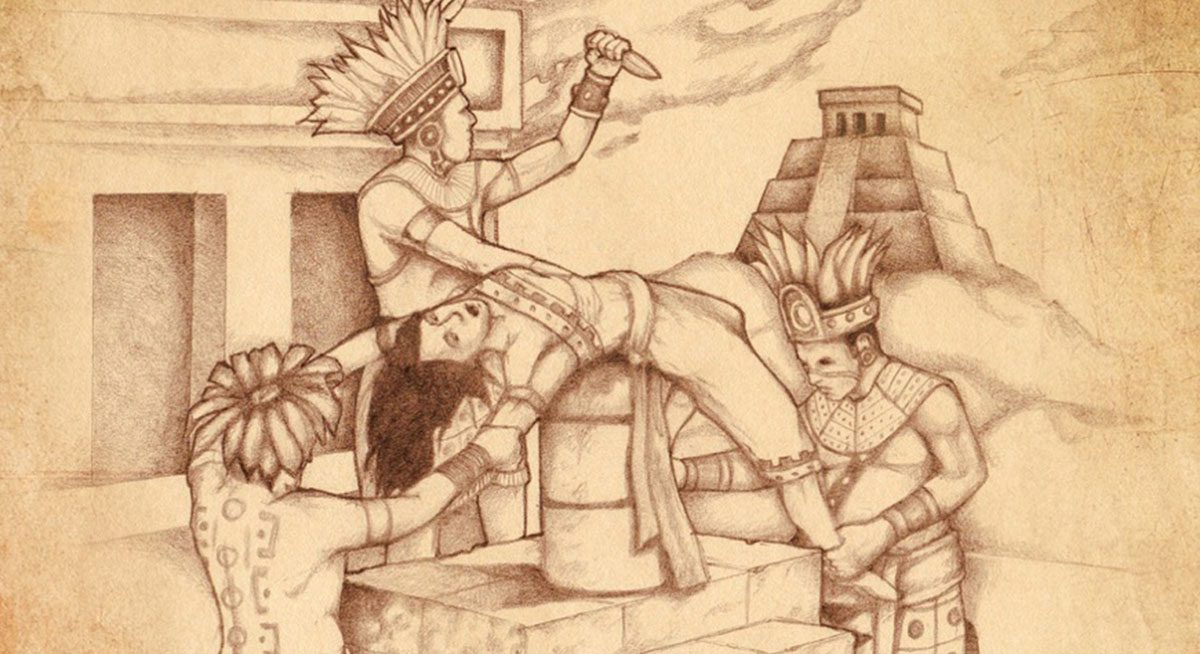 Why did the Lamanites Sacrifice Women and Children to Idols?

And they did … take many prisoners both women and children, and did offer them up as sacrifices unto their idol gods.
Mormon 4:14

While capturing the city Teancum, the Lamanites took many women and children as prisoners and sacrificed them to idols (Mormon 4:14). Although human sacrifice was likely practiced in earlier times among the Lehites, this is the first time it is specifically recorded in the Book of Mormon.[1] This shocking event may come as a gut-wrenching surprise to the reader. One wonders why anyone would commit such a senselessly violent act. Yet human sacrifice happened often in the ancient world.[2]

Child sacrifice has a long tradition in ancient Mesoamerica, the earliest evidence stretching back into early Olmec times (1600–1000 BC), where bone fragments from several newborn infants were discovered in a pond at Cerro el Manatí in Veracruz, Mexico that showed clear signs of being sacrificed and dismembered.[3] Similarly, at the Maya site of Colha, Belize, thirty decapitated skulls were deposited in a pit dating to AD 800 to 850. The composition of the remains showed them to be ten women, ten men, ten children (from ages six months to seven years).[4] In addition, recent research in Belize’s Midnight Terror Cave has produced 9,566 human bones, bone fragments, and teeth that were deposited over the last 1,500 years. A large portion of those bones were found to be from 4 to 10-year-old children, showing the growing trend of child sacrifice from the Classic (AD 200–1000) into the Post-classic period (AD 1000–1697).

In Mesoamerica, children were sometimes sacrificed to honor a new king.[5] And human sacrifice was not unique to Mesoamerica. In a place called Carthage, in North Africa, it was sometimes done as an assurance that business ventures would succeed.[6] It also appears to have been common during times of apostasy in ancient Israel for people to cause their children to “pass through the fire to Molech” (2 Kings 23:10).[7] This appears to have been a form of human sacrifice.[8] However, in the case of Mormon 4, the Lamanites may have done this as (1) part of a burial ceremony for a high-status soldier or (2) as a way to ensure their victory in the war.

Also, people were sacrificed as part of the burial ceremonies of rulers so they might serve their leader in the afterlife.[9] In the ancient Egyptian town of Abydos, for example, the body of a ruler named Djer was discovered, surrounded by the bodies of women who were likely his wives, concubines, or maids.[10] A similar situation was found at the ancient Mesopotamian city of Ur, where large numbers of attendants, both male and female, had been sacrificed and were buried with the Sumerian queen Puabi to accompany her into the afterlife.[11]

Similar practices are found in pre-Columbian America.[12] At a place called Cahokia, near St. Louis, the body of a ruler was found surrounded by 53 women who had been sacrificed.[13] In Mayan, Toltec, and Teotihuacan culture, one also sees women and children offered as sacrifices in a similar way. In some of these cases, it appears that the people being sacrificed had little connection to the dead leader.[14]

Child sacrifice in ancient Mesoamerica was also seen as a means of increasing the status of the surviving ruler.[15] Also, the Lamanites may have felt that such a sacrifice would help win the war by persuading an idol to fight for them. In the Old Testament, the “the king of Moab … took his eldest son that should have reigned in his stead, and offered him for a burnt offering upon the wall.” The king offered his child to the Moabite god Chemosh in the middle of battle in order to ensure that he would win the war he was fighting (2 Kings 3:26–27).[16] This implies that he thought the god would fight for him. The Lamanites may also have felt that sacrificing children would help them win.

Another possibility is that the individuals were sacrificed to obtain war trophies from their body parts, a prevalent practice in pre-columbian North, Central, and South America that often coincided with cannibalism.[17] Archaeological evidence of cannibalism in Mesoamerica has been suggested for infant sacrifices dating as far back to early Olmec times (1600–1000 BC).[18]

One final possibility is that the Lamanite warriors thought the sacrifices would help their crops grow. During a time of war, like Mormon 4, crops were often destroyed, causing famine.[19] This meant that the productivity of the surviving crops became even more important. In Mesoamerica, children were sacrificed during times of famine because people felt that this would increase crop yield.[20]

One might wonder at first how human sacrifice and idolatry could have been practiced by the children of Lehi after the glorious period of peace described in 4 Nephi. However, it is likely that when Mormon wrote about peace in “all the land” (4 Nephi 1:13) he likely meant all the land of the Nephites and Lamanites.[21] If this is the case, then many wicked and idolatrous practices, including human sacrifice, could have been preserved by the Lehites’ neighbors, and then later reintroduced into their society.[22]

From the Lamanites, similar practices seem to have spread to the Nephites. It is possible that this chapter of Mormon was written at around the same time as Moroni 9, a letter from Mormon to his son. The Nephites would eventually commit heinous crimes, similar to, yet even worse than that of the Lamanites (Moroni 9:10). This suggests that both the Lamanites and Nephites allowed negative influences from neighboring cultures to influence them.

This can serve as a reminder to modern readers of the Book of Mormon that negative influences from the surrounding cultures can have a harmful impact on those who believe in Christ. It cautions readers to separate themselves from the negative influences that surround them, something the children of Lehi failed to do.

The Book of Mormon teaches that the shedding of innocent blood is among the most abominable of all sins (Alma 39:5). A people once so blessed and chosen of God descended to the depths of the worst depravity to kill innocent women and children in the name of false gods. While such acts seem deplorable and unthinkable to many, the descent to such actions begins with a single step. Once one loses the companionship of the Holy Ghost, it is a slippery slope to becoming “past feeling” (Moroni 9:20).

The Adversary works hard to push the children of men past feeling so that they willfully break the commandments of God. Not only was the sacrifice of women and children breaking the commandments of God, but it made a mockery of the ultimate sacrifice made by the Son of God. Jesus Christ sacrificed himself so that we would not have to suffer the same fate. The sacrifice of the Son of God was an infinite and eternal sacrifice[23] to break the bands of death and bring salvation to the children of men.

[6] This seems to have been done during the time-period of the Book of Mormon. See Lawrence Stager and Samuel R. Wolff, “Child sacrifice in Carthage—Religious Rite or Population Control?” Biblical Archeological Review 10, no. 1 (January/February 1984): 31–51. See also Joseph A. Green and Lawrence Stager, “Were living Children Sacrificed to the Gods? Yes,” Archaeology Odyssey 3, no. 6 (November/December 2000): 29, 31.

[9] Ellen F. Morris, “Sacrifice for the State: First Dynasty Royal Funerals and the Rites at Macramallah’s Rectangle,” in Performing Death: Social Analyses of Funerary Traditions in the Ancient Near East and Mediterranean, ed. Nicola Laneri (Chicago, IL: The University of Chicago, 2007), 17.

[13] The most notable example of this dates to around AD 1000, but may have been practiced well before this period in this area. See Timothy R. Pauketat, Ancient Cahokia and the Mississippians (New York, NY: Cambridge University Press, 2004), 88–93.

[18] Ortiz C. Ponciano and María del Carmen Rodríguez, “Olmec Ritual Behavior at El Manatí: A Sacred Space,” in Social Patterns in Pre-Classic Mesoamerica, edited by David C. Grove and Rosemary A. Joyce, pp. 225-254, (Washington, D.C.: Dumbarton Oaks Research Library and Collection, 1999), 248-249. Mormon states cannibalism took place after human sacrifice by the Lamanites, specifically, “they feed the women upon the flesh of their husbands, and the children upon the flesh of their fathers” (Moroni 9:8). In 1609 explorer Samuel de Champlain witnessed the taking of war trophies by the Huron, who, after torturing the war captives, cut their body parts up, but kept the scalp as a trophy. Similar to what Mormon describes, the Huraons then gave pieces of the deceased’s heart to his brother and the other prisoners (see H. P. Biggar [ed]. The Works of Samuel de Champlain. 6. vol. [Torono: The Camplain Society, 1922-1936], 2:102–103).

We have human sacrifice in our day. It's called abortion. Sacrificed to the gods of convenience, popular wisdom, money and politics.

Evidence of human sacrifice still continues to this day in secret societies such as the Illuminati.