Why did the Ammonites Covenant Not to Take Up Arms? | Meridian Magazine 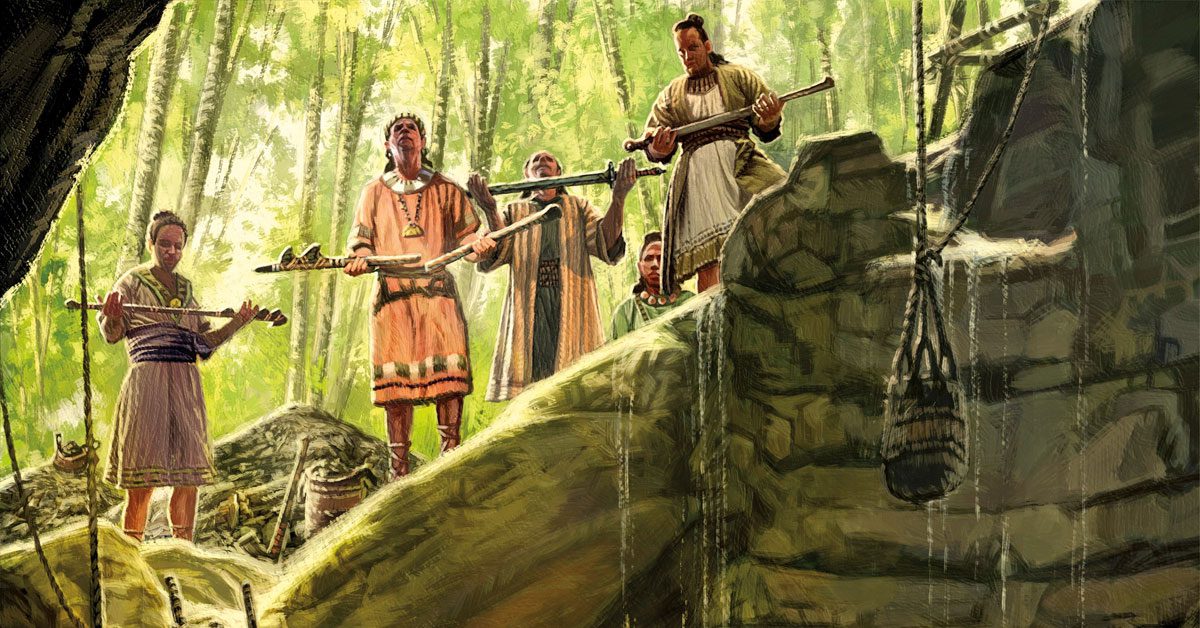 Why did the Ammonites Covenant Not to Take Up Arms?

“Now there was not one soul among all the people who had been converted unto the Lord that would take up arms against their brethren; nay, they would not even make any preparations for war” Alma 24:15

Thanks to the diligent and inspired efforts of the sons of Mosiah as publishers of peace and good tidings among the Lamanites (Mosiah 27:37; 28:1–2),1 “thousands were brought to the knowledge of the Lord” (Alma 23:5). These converted Lamanites called themselves Anti-Nephi-Lehies (Alma 23:17).2 In effort to repent of their sinful acts of murder and violence, they buried their weapons of war and covenanted to never again shed the blood of their enemies, even in self-defense (Alma 24:6–19). Then, in one of the most moving and courageous acts in all of the Book of Mormon, they met their enemies unarmed and defenseless, prostrating themselves in prayer to the Lord as their enemies fell upon them (Alma 24:21–22; cf. 27:1–3).

Ammon explained that love for their brethren was one of the primary motivators for the Anti-Nephi-Lehies’ act of self-sacrifice (Alma 26:31–34). The Anti-Nephi-Lehies were also motivated by their strong desire to repent of their sins and “many murders” which they had committed (Alma 24:9–11, 25; 27:6, 8). Since this seems to primarily be referring to their killing of Nephites during times of war, some have concluded that the Anti-Nephi-Lehies had become “strict pacifists,” who had come to see all wartime killing as murder, and therefore illegitimate.3 The full-story of the Anti-Nephi-Lehies (also known as the people of Ammon, see Alma 27:26), however, “introduces nettlesome difficulties for anyone who would appeal to the Ammonites as clear-cut models for absolute pacifism.”4

For one thing, although the Anti-Nephi-Lehies refused to engage in the shedding of blood themselves, they accepted Nephite military protection (Alma 27:23–24), and actively supported Nephite war efforts (Alma 27:24; 43:13). They even desired to join the war effort themselves at one point, though they were ultimately convinced to hold true to their covenant by Helaman (Alma 53:13–15). Their sons, however, who had been too young to join in the covenant against the shedding of blood, did join the Nephite armies (Alma 53:17).5 If the people of Ammon really felt that wartime killing was murder, it’s hard to imagine why they would support their own sons to going to war.6 As Duane Boyce explained, “All these actions are straightforward contradictions of a complete and principled renunciation of war.”7

Rather than adopting a categorical denunciation of all aspects of war, it seems the Anti-Nephi-Lehies had only come to see their own previous conduct and attitudes toward war as murderous. Boyce has pointed out that, historically, the Lamanites were the aggressors, fueled by their hatred for the Nephites and their delight in shedding blood. This made their participation in wars and other conflicts truly murderous.8 In addition, as Brant A. Gardner has suggested, it is possible that they had even participated in well-known ancient Mesoamerican religious practices that glorify war, bloodshed, and human sacrifice. Such acts of glorified killing would naturally be understood as murder to the newly converted disciples of Christ.9

Boyce observed, “Given the harsh reality of their past and the difficulty of their repentance, it is not surprising that they felt the need to maintain this forgiveness by repudiating not only murder but also anything remotely resembling it.”10 They understandably feared that “if we should stain our swords again they can no more be washed bright through the blood of the Son of our great God, which shall be shed for the atonement of our sins” (Alma 24:13). The Nephites were understanding of the Ammonites’ “fear to take up arms against their brethren lest they should commit sin” (Alma 27:23). In accordance with ancient interpretations of Deuteronomy 20, the Nephites granted the Anti-Nephi-Lehies a conditional exemption from military duty.11

There can be no doubt that the Anti-Nephi-Lehies “supply what must be among the most inspiring examples of repentance, contrition, humility, and sustained devotion to the Lord that can be found anywhere in scripture.”12 They recognized that the extreme nature of their previous sins required that they take extreme measures in order to fully repent and to avoid repeating those sins in the future. Even though their situation was unique, however, this does not mean that all people cannot learn from their example. Whatever the nature of one’s personal sins and struggles, the example of the Anti-Nephi-Lehies can inspire all to repent earnestly and to bury even the most ingrained and egregious transgressions and turn unto Christ.

In addition, the story of the Anti-Nephi-Lehies provides two exemplary demonstrations of how the gospel of Jesus Christ can bring peace and overcome violence. First, their decision not to take up arms even to defend themselves moved some of their Lamanite attackers to have compassion, repent, give up their weapons of war and join with the Anti-Nephi-Lehies, while the remaining Lamanite attackers at least ceased their attack in frustration. Some of the people of Ammon were slain, but an even greater number of Lamanites were united with them in the peace of the gospel, and conflict ended before even more loss of life ensued (Alma 24:21–26; 25:1).

On a second occasion the people of Ammon were attacked, and they again refused to take up arms in their own defense, and this time their attackers were unrelenting (Alma 27:1–3). The Nephites, however, were moved to compassion for them, and offered them a land of inheritance, and provided them military protection, despite “their many murders and their awful wickedness” of the past (Alma 27:22–23). Thus, the Nephites, who had previously wanted “take up arms against [the Lamanites], that we may destroy them” due to their “grossest iniquity” (Alma 26:24–25) now were willing to forgive these repentant Lamanites of their most grievous sins and unite with them in peace and provide for their protection. It is hard to appreciate how great an act of forgiveness this must have been.

This does not mean that war and violence can always be avoided. Tragic and horrific as it is, war is sometimes necessary and justified (Alma 43:45–47; 48:14–16, 23–25).13 Yet the story of the Anti-Nephi-Lehies is an example of how “the preaching of the word” can truly have a “more powerful effect upon the minds of the people than the sword” (Alma 31:5). Elder L. Tom Perry remarked, “While the message of the story is not to insist on universal pacifism, we do learn that by not returning aggressions from others we can have a profound effect on them. Literally, we can change their hearts when we follow Christ’s example and turn the other cheek. Our examples as peaceable followers of Christ inspire others to follow him.”14

4.J. David Pulsipher, “The Ammonite Conundrum,” in War and Peace in Our Times, 3. Nonetheless, Pulsipher, “Buried Swords,” 4–12 argues that parts of the story represent a “pacifist sensibility” (p. 5) and a “form of absolute pacifism” (p. 6).

13.See Boyce, Even Unto Bloodshed, 213–278 for an articulation of just war theory grounded in Latter-day Saint scripture, teachings, and principles. See also Morgan Deane, “Offensive Warfare in the Book of Mormon and a Defense of the Bush Doctrine,” in War and Peace, 29–39.