Why Did Snakes Infest Jaredite Lands During a Famine? | Meridian Magazine 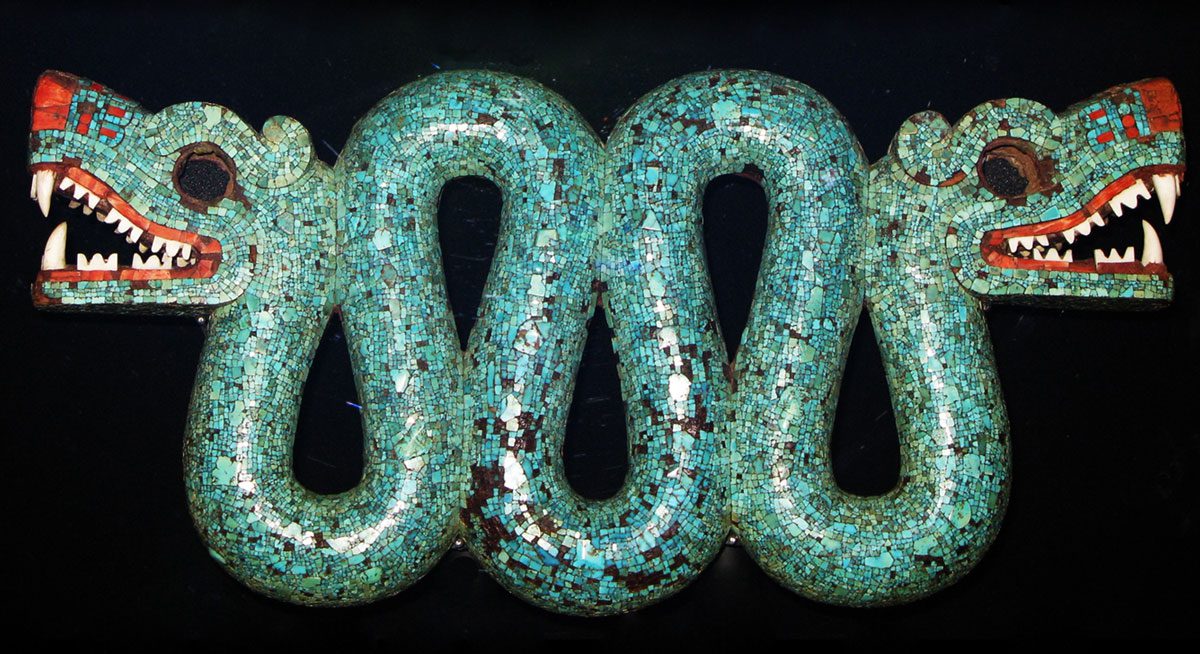 Why Did Snakes Infest Jaredite Lands During a Famine?

“And there came forth poisonous serpents also upon the face of the land, and did poison many people.”
Ether 9:30

During the reign of Heth, prophets warned the people that a “great famine” would come if they did not repent (Ether 9:28). At the behest of Heth himself, the people refused to believe the prophets, instead persecuting them and casting them out (v. 29). As predicted, “there began to be a great dearth upon the land … for there was no rain upon the face of the earth” (v. 30).

In the wake of the great dearth, or famine, a seemingly odd sequence of events followed. First, the land was infested by “poisonous serpents,” which “did poison many people.” Next, “flocks began to flee” southward, and the serpents followed the flocks. The serpents then stopped and “hedge[d] up the way” preventing people to pass into the land southward (Ether 9:31–33; cf. Ether 10:19).

Strange as it might seem, this series of events may be entirely natural. In times of drought, snakes typically migrate into populated areas in search of water or prey.[1] If an area has a lot of venomous snakes, then naturally incidents of people being bitten and “poisoned” by snakes increases.[2]

If a drought persists, then snakes, along with other animals, will continue to migrate in their search for water, which is likely what Ether interpreted as the flocks “flee[ing] before the poisonous serpents” (Ether 9:31). The flocks were likely migrating both to escape the infestation of snakes and the drought, with some animals perishing as they fled (Ether 9:32).[3]

When Ether indicated that the serpents did “pursue them no more” (Ether 9:33), it was probably because the snake migration ended. The snakes probably stopped upon finding a wet habitat with plenty of water available.[4] If a river or otherwise wet habitat lay between the Jaredites and the land southward, then a large population of snakes would settle there and “hedge up the way” to the land southward.[5]

The whole scenario becomes more extreme if the famine was caused by regional volcanic activity, which “can cause droughts or significant cooling on a regional scale far from the volcanic eruption.”[6] According to geologist Jerry Grover, one of the many effects of volcanic eruptions on the local ecology is to kill or significantly reduce the bird population.[7]

Several birds of prey not only feed on snakes themselves, but also compete with snakes for the same prey, such as rodents and lizards.[8] The temporary “decimation of these species would eliminate serious predators on snakes as well as removing competition for snake prey.”[9] As a result, snake populations would skyrocket, further enabling them to prevent passage through regions with a wet habitat.[10]

In the past, some have considered the story in Ether 9:28–33 about poisonous serpents too incredible to be believable. Yet the details turn out to be ecologically sound. As Brant A. Gardner noted, “what otherwise appears to be a fanciful tale contains surprising touches of authenticity.”[11]

John A. Tvedtnes similarly commented, “the story of the poisonous serpents which plagued the Jaredites has a ring of truth about it.”[12] The event cannot be confidently correlated externally to any particular natural disaster—in part because Jaredite chronology is too imprecise to determine when to look for it.[13] Nonetheless, the series of events is more true to life than a superficial reading might initially suggest, providing yet another example which illustrates the benefits of patient investigation over shallow reading.

There is also an important spiritual lesson to be learned. Just as the Jaredites faced a famine because of wickedness, so individuals and societies risk spiritual famines when they cut themselves off from the Lord. In so doing, they may naturally find themselves surrounded by spiritual serpents—those who are toxic to healthy and happy spiritual lives. Such noxious influences may create barriers which “hedge up the way” back to the Lord.

Fortunately, no barrier is so great the Atonement cannot “destroy” it, just as the serpents were eventually destroyed (Ether 10:19).[14] Just as the famine ended when the Jaredites repented (Ether 9:35), so too can sincere repentance end the spiritual famines faced by individuals and societies, destroying barriers that keep God’s children from returning into His loving arms and letting His light shine through.[15]

[1] Jerry D. Grover Jr., Geology of the Book of Mormon (Vineyard, UT: Grover Publications, 2014), 208 mentions a 2007 drought in Sydney, Australia which caused an infestation of brown snakes in the city and suburban area. Similar occurrences happened the year before (2006) in Lake Havasu, AZ (with rattlesnakes and sidewinders), and the year before (2005) in Pennsylvania (with rattlesnakes). See Don Ayotte, “More Snakes Slithering into Lake Havasu City Area,” Havasu News, September 1, 2006; Eric Mayes, “Heat and Drought Bringing Snakes Out of their Dens,” The Daily Item, August 18, 2005. See also John A. Tvedtnes, “Notes and Communications—Drought and Serpents,” Journal of Book of Mormon Studies 6, no. 1 (1997): 70–72; Hugh Nibley, Lehi in the Desert/The World of the Jaredites/There Were Jaredites, The Collected Works of Hugh Nibley, Volume 5 (Salt Lake City and Deseret Book, 1988), 221.

[2] For lists of the many venomous snakes in the Olmec region (Veracruz and Oaxaca), which many scholars believe to be where the Jaredites were, see Grover, Geology of the Book of Mormon, 206–207; Brant A. Gardner, Second Witness: Analytical and Contextual Commentary on the Book of Mormon, 6 vols. (Salt Lake City, UT: Greg Kofford Books, 2007), 6:265.

[3] It is important to note that the there is no indication that the animals perished by snakebite. They more likely perished from the drought.

[5] If placed in a Mesoamerican setting, rivers stretch across the northern part of the Isthmus of Tehuantepec, creating an ideal place for the snakes to settle and thus “hedge up the way” blocking off passage to regions southward of the isthmus. See John L. Sorenson, Mormon’s Codex: An Ancient American Record (Salt Lake City and Provo, UT: Deseret Book and Neal A. Maxwell Institute for Religious Scholarship, 2013), map 11; reprinted in Grover, Geology of the Book of Mormon, 204. See also the accounts of armies being stopped by snake infestations in Nibley, The World of the Jaredites, 221.

[7] See Grover, Geology of the Book of Mormon, 205–206. See also Sorenson, Mormon’s Codex, 645. Grover has also suggested that the name Heth might be involved in some wordplays linking it to a volcanic event. “Since many of the names in the Book of Mormon are metonymic, the volcanic correlation of the name ‘Heth’ and the corresponding event during his reign may perhaps be found in the translation by the Jaredite record by Mosiah using the Hebrew words or elements thereof: hat: to fear or be afraid; hata: to seize or snatch up, usually of fire or coals; mehitta: destruction, ruin or terror; mahta: fire pan or censer” (Jerry Grover, personal communication to Book of Mormon Central staff.)

[8] See Grover, Geology of the Book of Mormon, 208–210, which lists specific species in the Olmec area which prey on snakes, rodents, and lizards.

[12] Tvedtnes, “Drought and Serpents,” 72. See also Neal Rappleye, “‘The Great and Terrible Judgments of the Lord’: Destruction and Disaster in 3 Nephi and the Geology of Mesoamerica,” Interpreter: A Journal of Mormon Scripture 15 (2015): 152: “The effects of a volcanic eruption on an environment, therefore, carries rather potent explanatory power for an event often mocked as ridiculous or fanciful by modern critics of the text. It is hard to imagine a more perfect geologic, geographic, and ecologic setup for the events described in Ether 9.”

[13] There is wide disagreement on Jaredite chronology, which is primarily due to a lack of any confirmable external events to anchor it. John L. Sorenson and David A. Palmer both date the drought event to ca. 2100–2200 BC. See John L. Sorenson, An Ancient American Setting for the Book of Mormon (Salt Lake City and Provo, UT: Deseret Book and FARMS, 1985), 118; Sorenson, Mormon’s Codex, 28; David A. Palmer, In Search of Cumorah: New Evidences for the Book of Mormon from Ancient Mexico, 2nd edition (Springville, UT: Cedar Fort, 1999), 128. Yet Brant A. Gardner dates it to more than 1000 years later, ca. 800–900 BC. See Gardner, Second Witness, 6:264; Grover, Geology in the Book of Mormon, 202–203 follows Sorenson and Palmer, and thus seeks to link it to volcanic events dated to the late third millennium BC.

[14] This is likely the result of two things. First, as the drought ceased (Ether 9:35), snakes and other animals would return to their natural habitats and populations would be more evenly distributed. Second, eventually the bird populations would recover and begin to regulate snake populations, reducing them to normal levels. Thus the serpents would no longer pose a barrier to the land southward (Ether 10:19).

More likely the serpents were in North America as the rattlesnake. To hedge up the way between the land south and land north would only be about 40 miles in the Heartland Theory. It would be nice if you occasionally mentioned the other logical places of the book of Mormon events.