Why Did Oliver Cowdery Come Back to the Church? | Meridian Magazine 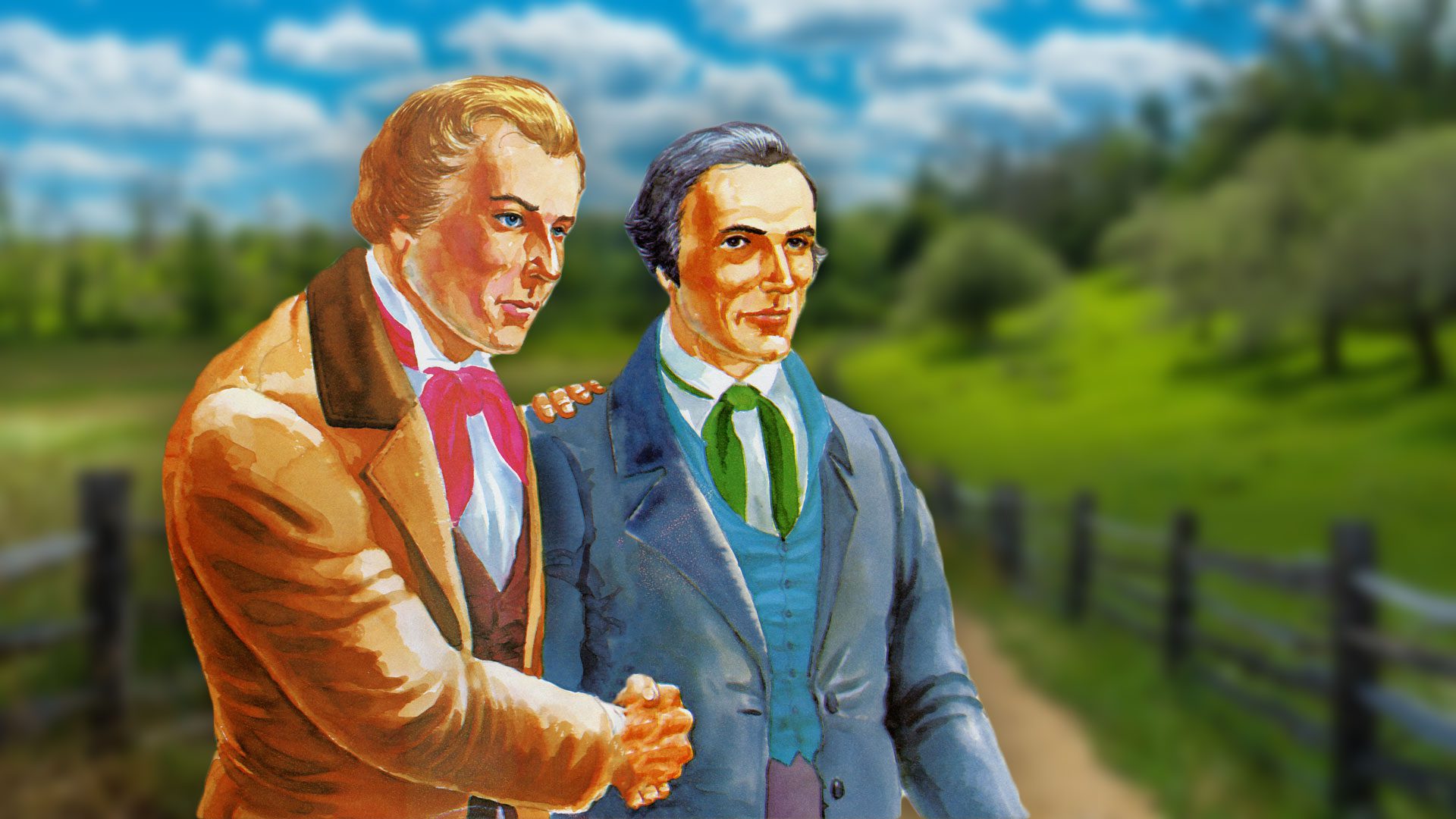 Why Did Oliver Cowdery Come Back to the Church?

And to Oliver Cowdery, who was also called of God, an apostle of Jesus Christ, to be the second elder of this church, and ordained under his hand

After the Prophet Joseph Smith, no single person was more deeply involved in the coming forth of the Book of Mormon and the restoration of the Church than Oliver Cowdery. Oliver was one of the three special witnesses chosen to bear record of the divinity of the Book of Mormon. He personally saw the Angel Moroni, the records and sacred relics, and heard the voice of God declare that the book was true. Despite all these incredible experiences, Oliver eventually grew bitter toward some new members of the Church’s leadership and was excommunicated in April 1838.1 A decade later, Oliver returned and was rebaptized into the Church. What caused Oliver to come back?

After leaving Missouri in the fall of 1838, Oliver traveled to Kirtland, Ohio, where he briefly practiced law with his brother Lyman, who was not a member of the Church. A short time later, Oliver relocated to Tiffin, Ohio, where he lived and practiced law for the next seven years. By 1842, Oliver was visited several times by Phineas Young, a devoted friend, and the husband of Oliver’s half-sister Lucy. After several conversations with Oliver, Phineas was able to report to his brother Brigham Young, the president of the Quorum of the Twelve Apostles, that Oliver’s heart “is still with his old friends.”2

Over the next few years, Phineas Young served as a mediator between Oliver and the leaders of the Church. Phineas believed that Oliver had been unjustly driven out of the Church by leaders and local members such as Thomas B. Marsh, George Robinson, and the scoundrel George Hinkle, who had purposely given Joseph Smith tainted information about Oliver and sought to tarnish his reputation. Oliver himself showed his willingness to reconcile with the Church when he offered near the end of 1842 to assist in the legal defense of Elder John Snyder, the leader of a group of British Latter-day Saint converts, who was arrested in New Orleans.3

Joseph Smith also expressed a desire for Oliver to return to the Church. He gave instructions to the Twelve to invite Oliver to return to full church fellowship. Willard Richards recalled that Joseph gave him instructions to “write to Oliver Cowdery & ask him if he has not eat[en] husks long enough.” Joseph even suggested that Oliver might accompany Orson Hyde of his mission to Jerusalem to dedicate the Holy Land.4 In response to this request, the Twelve in Nauvoo drafted a letter telling Oliver, “Your brethren are ready to receive you; we are not your enemies, but your brethren. Your dwelling place ought to be in Zion—your labor might be needed in Jerusalem, and you ought to be the servant of the living God.”5

Oliver wrote back, saying that he held “no unkindly feelings” toward the Twelve, and acknowledging his isolation. “It has been a long time, nearly six years—the winds and waves, floods and storms, have been arrayed to oppose me; and I need hardly say to you, that the Lord alone has upheld me, till I have fought up, labored up, and struggled up, to a fair reputation and a fair business in my present profession.”6

Oliver may have been further moved toward returning when he heard of Joseph Smith’s martyrdom in June 1844. William Lang, an attorney who was with Oliver when news of Joseph’s death reached them later wrote, “I well remember the effect upon his countenance when he read the news in my presence. He immediately took the paper over to his house to read to his wife. On his return to the office we had a long conversation on the subject, and I was surprised to hear him speak with so much kindness of a man that had so wronged him as Smith had. It elevated him greatly in my already high esteem, and proved to me more than ever the nobility of his nature.”7

One of the reasons that Oliver’s return took several years stemmed from the fact that he was concerned that, if he was not cleared of the charges made against his during his excommunication trial, he could not stand as a credible witness of the Restoration. The council in Far West, Missouri that served at Oliver’s trial accused him of theft and forgery. Oliver did not claim to be without faults, but he wished to be exonerated of these charges before he returned. In a letter to Phineas Young, Oliver wrote an impassioned plea for his character to be cleared of false charges so his witness of the Restoration would not be impugned. Oliver wrote,

I have cherished a hope, and that one of my fondest, that I might leave such a character as those who might believe in my testimony, after I should be called hence, might do so, not only for the sake of the truth, but might not blush for the private character of the man who bore that testimony. I have been sensitive on this subject, I admit; but I ought to be so—you would be, under the circumstances, had you stood in the presence of John, with our departed brother Joseph, to receive the Lesser Priesthood—and in the presence of Peter, to receive the Greater, and looked down through time, and witnessed the effects these two must produce,—you would feel what you have never felt, were wicked men conspiring to lessen the effects of your testimony on man, after you should have gone to your long sought rest.8

Oliver was confident that he would be exonerated of any false charges, writing, “I am fully, doubly, satisfied, that all will be right—that my character will be fully vindicated.”9 As Oliver contemplated his return to the Church, concern for his character and integrity as a witness was foremost on his mind. He wrote to his brother-in-law and fellow witness David Whitmer in 1847, saying, “If ever the church rises again in true holiness, it must arise in a measure upon our testimony, and upon our characters as good men.”10

After several years of writing back and forth with Church leaders, Oliver felt that his honor had been sufficiently cleared, and he was finally ready to return. On October 21, 1848, Oliver at last rejoined the Saints at Kanesville (Council Bluffs), on the western border of Iowa. Oliver arrived during a meeting where Apostle Orson Hyde was speaking. According to reports of the meeting, Elder Hyde left the stand in the middle of his address to embrace Oliver. Elder Hyde then invited Oliver to take the stand and share his testimony.

Oliver bore a powerful testimony of the miracles surrounding the coming forth of the Book of Mormon and the restoration of the priesthood. One participant in the meeting wrote that Oliver said:

I wrote, with my own pen, the entire Book of Mormon (save a few pages) as it fell from the lips of the Prophet Joseph Smith, as he translated it by the gift and power of God …. I beheld with my eyes, and handled with my hands, the gold plates from which it was transcribed. … The book is true.11

From the Book of Mormon and also from his participation in the restoration of the Aaronic Priesthood, Oliver knew the importance of being baptized, and so he met directly with the leaders of the Church there at Kanesville, and was rebaptized on November 12, 1848.12 He returned to his home in Missouri, planning to put his belongings in order and to return to Council Bluffs to journey west with the main body of the Saints, yearning to reunite with his faithful friends.

His return to the Church allowed Oliver to bear again his fervent testimony of the truthfulness of the Book of Mormon. In January 1849 he took his family to visit his in-laws, the Whitmers, who were then living nearby in Richmond, Missouri. He was making plans to travel to the West, but his health soon began to fail rapidly. While he was staying with the Whitmers, Jacob Gates, an old acquaintance of Oliver’s, stopped in to renew their friendship. Gates asked Oliver about his testimony of the Book of Mormon. Oliver replied:

Jacob, I want you to remember what I say to you. I am a dying man, and what would it profit me to tell you a lie? I know … that this Book of Mormon was translated by the gift and power of God. My eyes saw, my ears heard, and my understanding was touched, and I know that whereof I testified is true. It was no dream, no vain imagination of the mind—it was real.13

In the end, Oliver Cowdery returned to the Church because doing so brought him great joy. He passed away on March 5, 1850 in Richmond, Missouri. On his deathbed, he was surrounded by members of the Whitmer family, including his wife, Elizabeth, and also their only daughter, Maria. Phineas Young had also made a special trip to be there, with his wife Lucy. David Whitmer, Oliver’s fellow witness of the Book of Mormon, wrote, “[Oliver] died the happiest man I ever saw … He said, ‘Now I lay me down for the last time, I am going to my Savior,’ and died immediately with a smile on his face.’”14

I enjoyed this article so much! It filled in the blanks of my knowledge of Brother Cowdery. My love for him has grown from our study of the Doctrine and Covenants this year, and this article really served to increase my knowledge in a way that brings me joy.