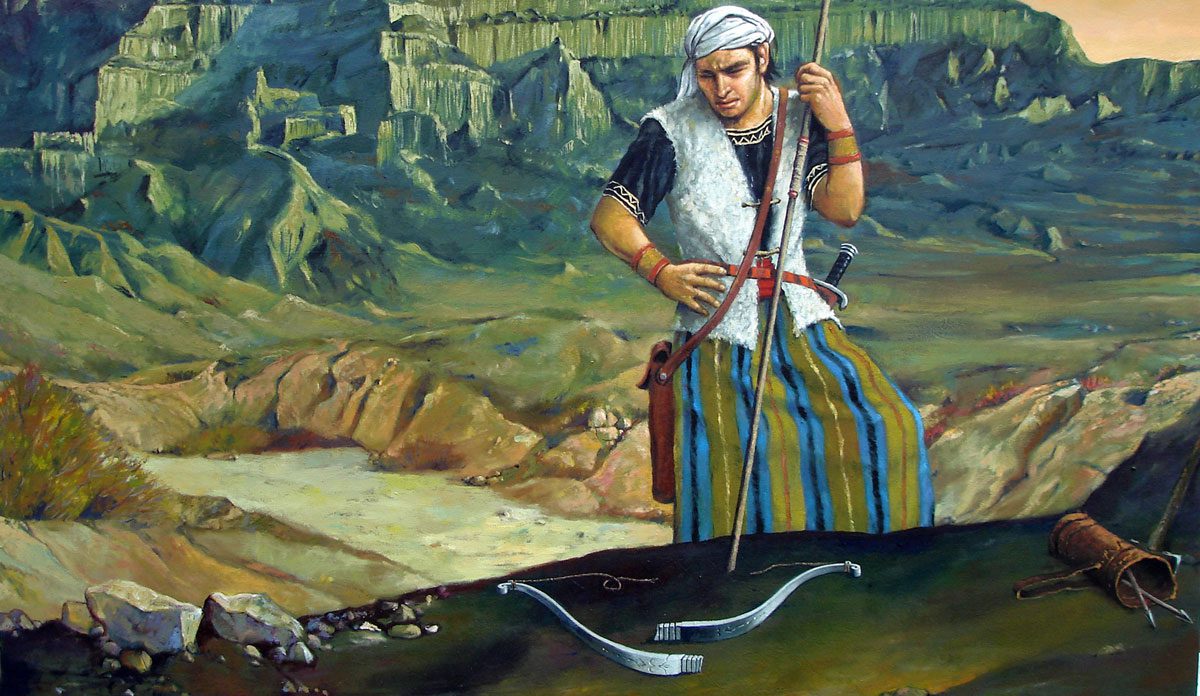 While traveling through the wilderness, Nephi recounts that his family stopped for a hunting expedition. Nephi, “went forth to slay food,” but “did break [his] bow, which was made of fine steel” (1 Nephi 16:18). The reference to Nephi’s steel bow recalls several biblical passages which reference a “bow of steel.”

“He shall flee from the iron weapon, and the bow of steel shall strike him through” (Job 20:24).

The word translated “steel” in these passages is the Hebrew nhwsh which actually means “bronze” and is rendered that way in more recent translations.1 The King James translation as steel reflects an older, broader range of meaning which included not only carburized iron (what we would call steel today) but also hardened copper alloys such as bronze. This broader meaning of steel is also shared with other European languages.2 The Book of Mormon translation may have also used this broader meaning for steel, thus indicating that Nephi’s “fine steel” bow was similar to the bow of nhwsh (bronze, steel) mentioned in the Bible.

According to Frank Moore Cross and David Noel Freedman, the bronze bow in biblical passages does not refer to a bow made entirely of metal, but instead, “probably refers to a composite bow, bound and/or inlaid with bronze.”3 Such bows could be “decorated or reinforced in certain parts (usually the upper limb, nock, and grip) with bronze.”4 More common composite bows were made from a wooden base, animal horn, and sinew. These materials were bound and glued together to form an integrated body, shaped into a double-convex form that was powerful enough to fire arrows which could effectively pierce objects from 300–400 meters away.5 It was also smaller and less heavy than regular bows. They were very effective and feared in warfare, but were difficult and expensive to make. “For a considerable period after the composite bow was introduced, it remained primarily a weapon of royalty.”6

Relatively few composite bows have survived from the ancient Near East. Before the discovery of King Tutankhamun’s tomb, only ten of these were known, but amidst the treasures of Tutankhamun’s tomb, 27 composite bows were found. Although some of the weapons were purely ceremonial, “the majority of the weapons would have been usable.”7 One of these, the so-called “Bow of Honour” was beautifully decorated with gold sheeting on the grip, lower, mid, and upper arms as well as the tips of the weapon.8 Howard Carter, who first discovered and excavated the tomb, described it as a “work of almost inconceivable fineness,”9 reminding us of Nephi’s description of his own bow of “fine steel” (1 Nephi 16:18).

According W. McLeod, Tutankhamun’s “Bow of Honour” “could have been strung” and used.10 It is reasonable to suppose, based on the biblical references to a “bow of bronze,” that the same could be done with bronze either for decorative purposes, or to strengthen parts of a composite bow without substantially increasing the weight.

Composite bows have a specific structural problem that leaves them susceptible to changes in temperature and climate, which may cause the bow to warp and break. … Thus, if Nephi’s bow were of a composite type, his move from the more temperate climate of Palestine to the dry heat of the Arabian peninsula could have contributed to the risk that his bow might warp and break.11

In addition, such bows might break at points where the stiffer metal ended, creating pressure points where and when the wood or more flexible materials were pulled back.

Beyond such environmental and physical factors, however, are the spiritual lessons Lehi’s family needed to learn from such an incident.12 As Alan Goff noted, “The message of the broken bow is that the Lord’s people can’t rely on the arm of flesh but must rely on the arm of the Lord.”13

When Nephi’s bow broke, Laman, Lemuel, and even Lehi, “began to murmur against the Lord” (1 Nephi 16:20). After Nephi built a new bow and arrow, he asked his father where he should hunt, a gesture that humbled Lehi and got him to “inquire of the Lord” (1 Nephi 16:24). In response to his inquiry, Lehi was prompted to look upon the Liahona. It was from this occasion that Nephi learned that the pointers in the Liahona “did work according to the faith and diligence and heed which we did give unto them,” and thus, “by small means the Lord can bring about great things” (1 Nephi 16:28–29).

Nephi gave heed to the pointers in the Liahona, which pointed him to where he could find food, and he returned to camp “bearing beasts which [he] had slain,” compelling his family to further “humble themselves before the Lord” (1 Nephi 16:32). Nephi and his family learned the lesson taught by the psalmist: “For I will not trust in my bow, neither shall my sword save me. But thou hast saved us …. In God we boast all the day long, and praise thy name for ever” (Psalm 44:6–8).

Book of Mormon readers today can learn from Nephi’s example. When things go wrong or unexpected obstacles get in the way, instead of murmuring and complaining, it can become an opportunity to put one’s trust in the Lord, rather than relying on the “arm of the flesh” (2 Nephi 4:34).

Alan Goff, “A Hermeneutic of Sacred Texts: Historicism, Revisionism, Positivism, and the Bible and the Book of Mormon” (Master’s Thesis, Brigham Young University: 1989).

8.According to W. McLeod, “Details of construction are concealed by gold sheeting and fine filigree gold-work inlaid with colored stones and glass. The bow is not completely covered with gold sheeting in a single piece; rather each plain band is composed of a single piece of gold; the decorative bands overlap it at each edge for a width of 0.004.” He also notes, “Because the gold of the ‘Bow of Honour’ is not continuous, but is applied in zones, presumably, it could have been strung.” W. McLeod, Composite Bows from the Tomb of Tutankhamun (Oxford: Oxford University Press, 1970), 10, 12.

13.Alan Goff, “A Hermeneutic of Sacred Texts: Historicism, Revisionism, Positivism, and the Bible and the Book of Mormon” (Master’s Thesis, Brigham Young University: 1989), 95.

It is easy to break a bow. Simply shoot it without an arrow in place. I had the upper limb of my bow shatter violently when the nock of the arrow split when I released the string. I can see the same happening to Nephi! BTW, wooden bows of over 100 pounds draw were used in war, famously in Henry V's victory at Agincourt. They could pierce the armor of the day.

As my friends and I watched the broken bow video, we wondered together how he could make a new one (out of wood??) that would be strong enough to kill a large animal??