Why Did Nephi Say That People Had to Learn Things Line Upon Line? | Meridian Magazine 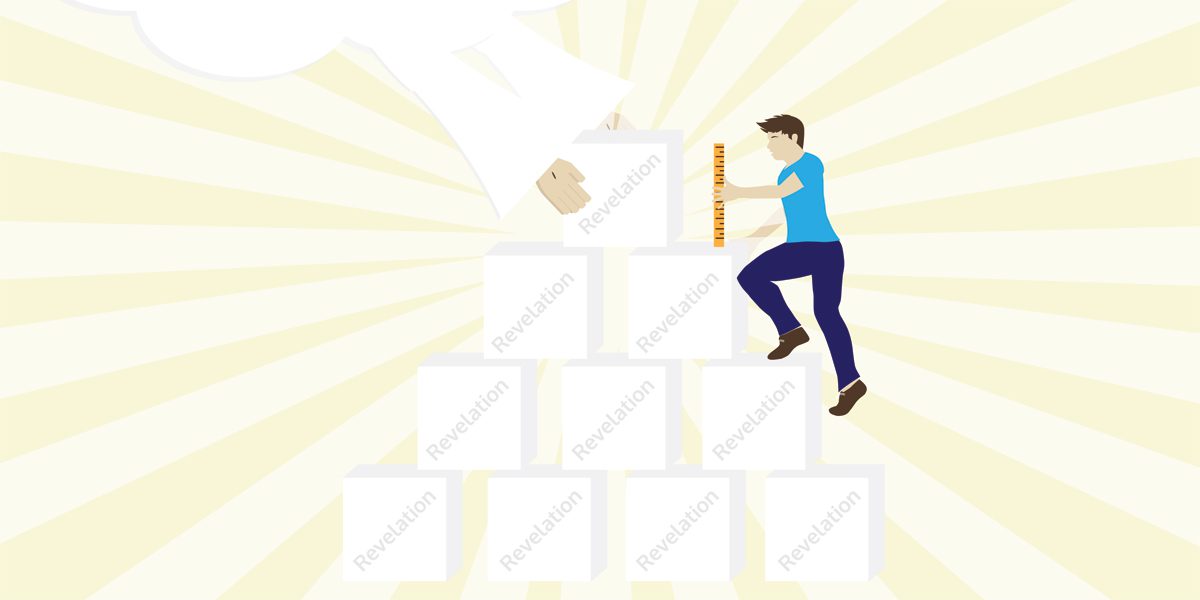 Why Did Nephi Say That People Had to Learn Things Line Upon Line?

“For behold, thus saith the Lord God: I will give unto the children of men line upon line, precept upon precept, here a little and there a little; and blessed are those who hearken unto my precepts, and lend an ear unto my counsel, for they shall learn wisdom; for unto him that receiveth I will give more; and from them that shall say, We have enough, from them shall be taken away even that which they have.”
2 Nephi 28:30

In 2 Nephi 28:30, Nephi declared, “thus saith the Lord God: I will give unto the children of men line upon line, precept upon precept, here a little and there a little.”[1] People often use this scripture when talking about how people learn, but understanding the context behind this scripture can help explain how people can acquire spiritual knowledge.[2]

In 2 Nephi 28, Nephi warned his people against becoming complacent in their faith for Satan will “lull [people] away into carnal security, that they will say: All is well in Zion … and thus the devil … leadeth them away carefully down to hell” (2 Nephi 28:21).[3] Thus, Nephi warned, “wo be unto him that is at ease in Zion … that crieth: All is well” (v. 24–25). In order to avoid this kind of complacency, people need to listen to the revelation continuously being revealed by the power of God through the gift of the Holy Ghost (v. 26) and not say, “We have received, and we need no more” (v. 27). Nephi also condemned those that “are angry because of the truth of God” (2 Nephi 28:28) and those who say, that they “need no more of the word of God” (v. 29).[4]

Because learning “line upon line” is so important, it is helpful to know where this phrase comes from.[6] The phrase “line upon line, precept upon precept” in 2 Nephi 28:30 is a modified quote based on Isaiah 28:10, “For precept must be upon precept, precept upon precept; line upon line, line upon line; here a little, and there a little.”[7] In Isaiah 28, the prophet condemned the inability of the false priests and prophets of Israel to receive revelation from the Holy Ghost because of their alcohol-fueled parties (Isaiah 28:7).[8] Because God could not reveal anything to these priests, he would turn to the rising generation to teach them from a young age (v. 9),[9] one “precept” or commandment at a time.[10]
The reason this complacency is so dangerous to spiritual health is because God does not give everything to His children at once. Instead, he teaches them, “line upon line, precept upon precept, here a little and there a little” (2 Nephi 28:30). Therefore, those that continue to listen to Him “shall learn wisdom; for unto him that receiveth I will give more; and from them that shall say, We have enough, from them shall be taken away even that which they have” (v. 30).[5]

The Hebrew word for “line” in this verse is the same word used for a measuring rod, implying that God would teach by “measuring out” a little bit at a time.[11] The words in Hebrew even sound like baby-talk, reminding everyone of the children God will now be teaching.[12] This verse may also be responding to sophisticated people in court who have mocked Isaiah. Isaiah appears to be reminding these people that his “unsophisticated” message that they have mocked for sounding like a baby’s babbling, is the way God operates.[13]

Isaiah then warned the people that because they did not listen to God when He tried to teach them “line upon line,” He would speak to His people through “another tongue” (Isaiah 28:11). This is a reference to the foreign tongue of the Assyrian army, who would come in and punish Israel for their sins.[14] In Isaiah’s time, people refused to listen when God tried to teach them a little bit at a time. They lost everything because of their closed ears and hard hearts. In 2 Nephi 28:30, Nephi taught the same thing: those that allow God to teach them gradually will “learn wisdom,” and those that reject this gradual unfolding of truth will lose what they have.

2 Nephi 28, when read in its context, shows that as believers are faithful to the truth and light they have already received, they will receive more.[15] Answers to questions and prayers often come “line upon line, precept upon precept.”[16] Nephi reminded his readers that those in Isaiah’s times who did not listen to God’s “line upon line” direction experienced disaster. The warning in modern times is no different than in Nephi’s day or Isaiah’s day. Just as little children begin learning at a basic level and are constantly learning more and more, all believers who humble themselves as little children in the eyes of God have the opportunity to grow in the brightness of gospel “line upon line” until they reach the perfect day.[17]

This is exactly what Joseph Smith was told: “That which is of God is light; and he that receiveth light, and continueth in God, receiveth more light; and that light groweth brighter and brighter until the perfect day” (Doctrine and Covenants 50:24). Richard G. Scott modeled such searching learning. He would read a passage of scripture, then “ponder what the verse means and pray for inspiration. I then ponder and pray to know if I have captured all the Lord wants me to do. Often more impressions come with increased understanding of doctrine. I have found that pattern to be a good way to learn from the scriptures.”[18]

If believers in Christ will continue to ponder the words of the Lord and to listen to the revelation they receive, they will avoid becoming complacent in their faith. They will continue to gain revelation steadily, and God will continue to reveal truths to them.[19] This will keep them from losing the truth they used to have and allow their understanding to grow “brighter and brighter until the perfect day” (Doctrine and Covenants 50:24).

Elder Richard G. Scott, “How to Obtain Revelation and Inspiration for Your Personal Life,” Ensign, May 2012, 45–47, online at lds.org.

[1] The parallelism between the parts of this verse are strengthened in the earliest text. See Royal Skousen, Analysis of Textual Variants of the Book of Mormon, Part Two: 2 Nephi 11–Mosiah 16, The Book of Mormon Critical Text Project, Volume 4 (Provo: FARMS, 2004–2009) 874–875.

[7] While not an exact quotation, Nephi used a common ancient technique for making specific reference to another source. In this technique, elements in ancient texts were often repeated in reverse order as a way of demonstrating that the author was quoting from something else, just like in this verse. See M. Seidel, Studies in Scripture (Jerusalem: Mosad Harav Kook, 1978). See also David Bokovoy, “Inverted Quotations in the Book of Mormon,” Insights: A Window on the Ancient World 20, no. 10 (October 2000): 2; David E. Bokovoy and John A. Tvedtnes, Testaments: Links Between the Book of Mormon and the Hebrew Bible (Tooele, UT: Heritage Press, 2003), 56–60. For another example of Seidel’s Law in the Book of Mormon, see Book of Mormon Central “Why Must There Be an Infinite and Eternal Sacrifice? (Alma 34:12),” KnoWhy 142 (July 13, 2016).

[8] The word “little” in this verse is somewhat difficult. However, the Dead Sea Scrolls, Septuagint (the Greek version) and most analyses of the standard Hebrew text (the Masoretic text) show that “here a little, there a little” is the best translation. See J. J. M. Roberts, First Isaiah, Hermeneia—A Critical and Historical Commentary on the Bible (Minneapolis, MN: Fortress Press, 2015), 351.

[9] It is implied that God is the one doing the teaching in Isaiah 28:11–13, and one could therefore conclude that it is also God doing the speaking in verse 9. See Joseph Blenkinsopp, Isaiah 1–39: A New Translation with Introduction and Commentary, Anchor Bible Commentary, Volume 19 (New York, NY: Doubleday, 2000), 386.

[10] This word is rare, as it only appears three times in the Old Testament, but the way it is used in Hosea 5:11 shows that “precept” or “commandment” is a reasonable translation of this. See George Wigram, ed., The Englishman’s Hebrew Concordance of the Old Testament: Coded with the Numbering System from Strong’s Exhaustive Concordance of the Bible (Peabody, MA: Hendrickson, 1980), s.v., tsav.