Why Did Nephi Prophesy of Christopher Columbus? | Meridian Magazine 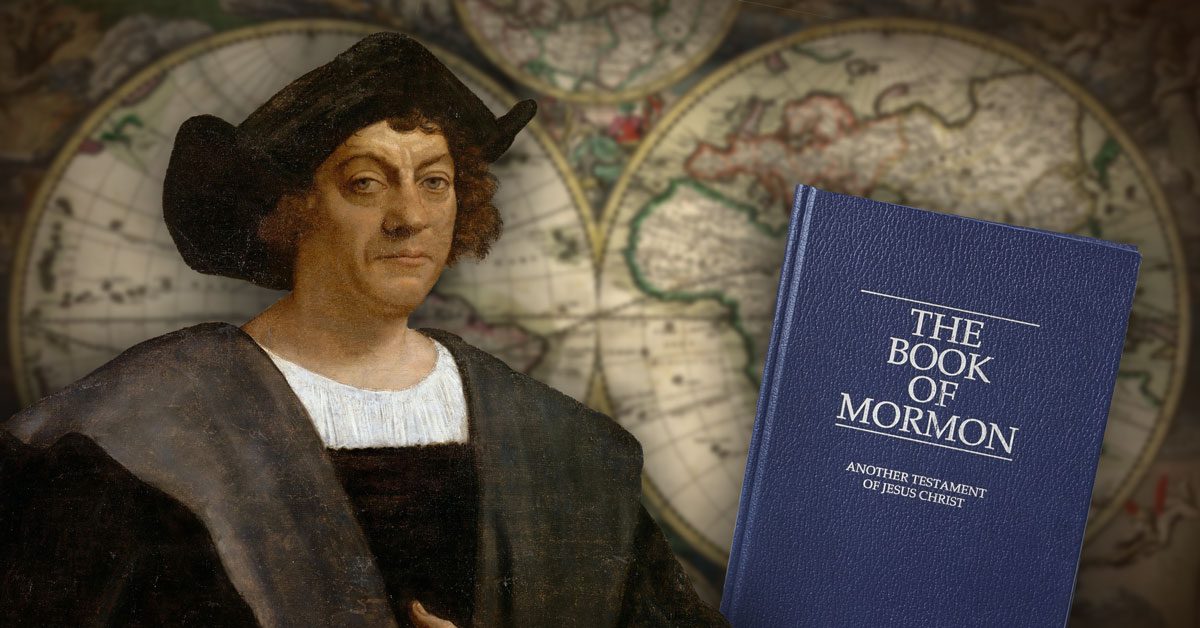 As Nephi witnessed future events leading up to the fulfillment of all the covenants God had made with his posterity, he saw in vision that “many waters … divided the Gentiles from the seed of my brethren.” He then saw “a man among the Gentiles” who, inspired by the “the Spirit of God,” crossed “the many waters, even unto the seed of my brethren, who were in the promised land.” This gentile’s improbable success opened the way for “other Gentiles,” to cross “the many waters.” Before long, there were “many multitudes of the Gentiles upon the land of promise” and the seed of Nephi’s brethren “were scattered before the Gentiles and were smitten” (1 Nephi 13:10–14).

Latter-day Saints have long identified this “man among the Gentiles” who initiated the coming of “many multitudes of Gentiles” as Christopher Columbus, who first voyaged across the Atlantic to the islands of the Caribbean (though he thought he had arrived in the Indies) in 1492.1 According to Laurence Bergreen, “Columbus’s voyages to the New World differed from all the earlier events in the scope of its human drama and ecological impact. Before him, the Old World and the New remained separate and distinct continents, ecosystems, and societies; ever since, their fates have been bound together, for better or worse.”2

Columbus made four voyages to the New World between 1492 and 1504 in which he encountered native peoples of the Bahamas and the Caribbean islands, including Cuba, Hispaniola, and Jamaica. It was not until his third voyage that he came to the coast of Venezuela and began to realize that it was not merely islands, but a massive and previously unknown continent that he had discovered. Finally, on his fourth voyage he explored the coasts of Honduras, Nicaragua, Costa Rica, and Panama, meeting and interacting with natives throughout these lands.3

Those who have studied Columbus’s first voyage, in particular, have been impressed by how Columbus navigated so perfectly, despite sailing into unknown waters and having only rudimentary means of determining where he was. Samuel Eliot Morison remarked, “no man alive, limited to the instruments and means at Columbus’s disposal, could obtain anything near the accuracy of his results.”4 While many today might attribute this to Columbus’s brilliance or skill, or even to shear dumb luck, Columbus himself attributed it to the Lord’s guiding hand.5 “Who can doubt,” he later wrote, “that this fire was not merely mine, but also of the Holy Spirit … urging me to press forward?”6

Columbus’s motives for attempting his trans-Atlantic crossing are manifold and complex, and in recent years he has become increasingly controversial as his and his men’s often harsh and violent treatment of the natives has been rightly criticized.7 Yet throughout his life, Columbus maintained that his primary motives for crossing the Atlantic were religious, and he believed he was fulfilling biblical statements and prophecies about the end times found in Isaiah mentioning the “islands of the sea” and in John 10:16 about “other sheep.”8

While the writings describing Columbus’s religious convictions have long been known, they’ve only recently begun to be taken seriously. In the 19th and early 20th centuries, scholars preferred to portray Columbus as a rational scientist and explorer.9 As he has become more controversial, interpretations of his motives have become more cynical, with late 20th and early 21st-century historians tending to see him more as a greedy opportunist, whose pious pretensions were merely a front used in efforts to convince Ferdinand and Isabela to support his endeavors.10

Some other historians, however, have challenged this view, insisting that while motives like glory, gold, and greed no doubt played a role in Columbus’s quest, his religious convictions were real and sincere. Pauline Moffitt Watts, Leonard I. Sweet, and most recently Carol Delaney have all argued persuasively that Columbus was driven by a religious worldview in which he saw himself playing a crucial role as God’s instrument in the unfolding events of the end times.11

If Columbus is, indeed, the “man among the Gentiles” seen by Nephi in his vision, that would confirm that Columbus truly did have a role to play in the unfolding apocalyptic drama of the end times—but not the role he thought he had.12 The Holy Spirit had, in fact, “wrought upon” him, but not so that he could discover passage to the Indies and bring to pass the Christian conquest of Jerusalem. It was to reach “the seed of [Nephi’s] brethren, who were in the promised land” (1 Nephi 13:12).

It is important to acknowledge that not everything Columbus did was inspired by God. Nephi only says the Spirit would inspire him to cross the many waters. He says nothing that endorses Columbus’s actions after he arrives in the promised land. Columbus was not as cruel to the natives as many others, but he was a man of his time who exploited and enslaved the natives he came into contact with, and he opened the flood gates of European conquest.13 Indeed, as Nephi prophesied, the arrival of this “man among the Gentiles” led to the tragic scattering and smiting of the Lamanites throughout the New World (1 Nephi 13:14).

But Columbus’s voyages also set in motion the series of events leading up to the Restoration of the Gospel of Jesus Christ—including the coming forth the Book of Mormon and its use to restore the children of Lehi to a knowledge of their privileged status as covenant people of the Lord (1 Nephi 13:33–42; 1 Nephi 15:14).14 Today, the Lord’s promises to the children of Lehi are being fulfilled (see D&C 3:18–19).

Recognizing this man as Columbus also has implications for how we understand Lamanite identity and the extent of the promised land granted to Lehi’s posterity. Nephi specifically says that this man would reach the promised land, and interact with the seed of the Lamanites. While this does not necessarily mean that Book of Mormon events took place in isles of the Caribbean, or any other place Columbus visited, it suggests that those islands—along with the northern coast of South America, and southern Central America—are part of the land promised to Lehi’s seed.15 It further suggests that Lehi is an ancestor to the native peoples in those lands, and that they are entitled to the all the blessings the Lord has in store for that chosen lineage.16

5.Christopher Columbus, Letter from the Admiral to the King and Queen, in Libro de las profecias, 105: “With a hand that could be felt,” he wrote “the Lord opened my mind to the fact that it would be possible to sail from here to the Indies.”

6.Christopher Columbus, Letter from the Admiral to the King and Queen, in Libro de las profecias, 105.

7.For background on the harsh treatment of Caribbean natives by Columbus and the Spaniards, see William F. Keegan, “Pacification, Conquest, and Genocide,” in Columbus Encyclopedia, 532–535; Bergreen, Columbus, 119–219.

10.See, for example, Felipe Fernandez-Armesto, 1492: The Year the World Began (New York, NY: HarperOne, 2009), 177–204; Bergreen, Columbus. His later convictions are taken somewhat more seriously, believed to be sincere but delusional by Fernandez-Armesto and others.

13.While the heroic view of Columbus overlooks or downplays his flaws and his mistreatment of the natives, the increasingly more common view of Columbus as a villain guilty of egregious crimes is also guilty of oversimplifying history. See Carla Rahn Phillips, “Myth of Columbus,” in Columbus Encyclopedia, 494–497; Delaney, Columbus and the Quest, 238.

He was mentioned to show God's hand and that the unfolding of events was part of a plan. Of course, God knew that evil men in this time would vilify Christopher Columbus but members of the church should know better.