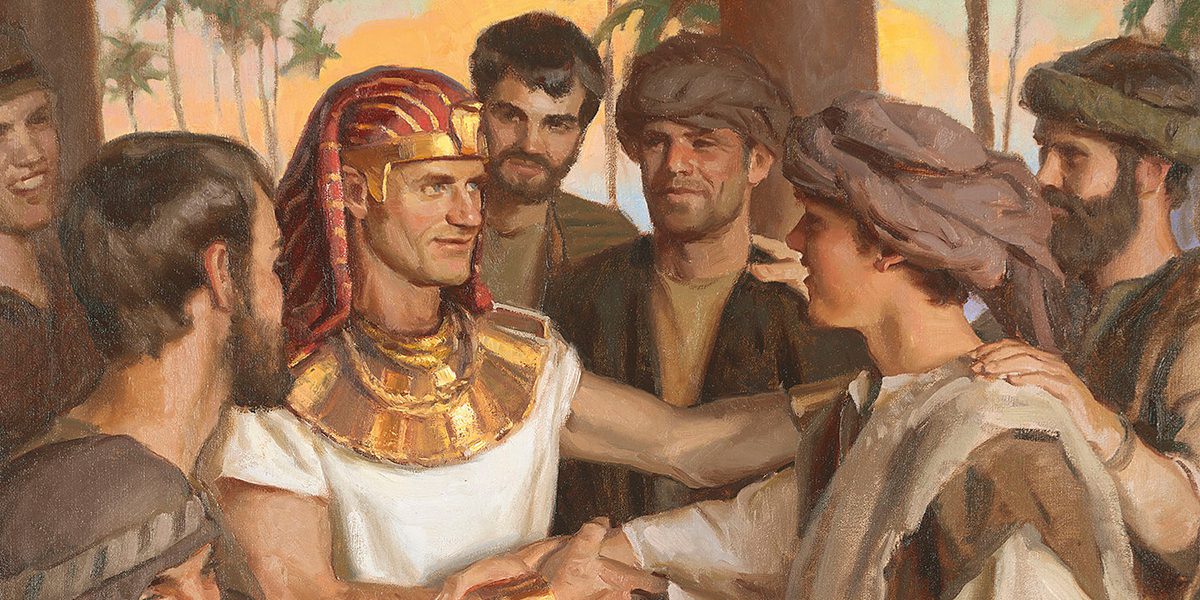 Why Did Nephi Connect Isaiah’s Prophecies with Joseph Who Was Sold into Egypt?

“And the Lord will set his hand again the second time to restore his people from their lost and fallen state. Wherefore, he will proceed to do a marvelous work and a wonder among the children of men.”
2 Nephi 25:17

When Lehi obtained the plates of brass, he discovered that “he was a descendant of Joseph; yea, even that Joseph who was the son of Jacob, who was sold into Egypt, and who was preserved by the hand of the Lord” (1 Nephi 5:14). Nephi then immediately added that “they [meaning Jacob’s future posterity] were also led out of captivity and out of the land of Egypt, by that same God who had preserved them” (v. 15). These verses mark the beginning of a pattern in the Book of Mormon where Joseph’s deliverance of his family is linked with future deliverances of Jacob’s posterity.[1]

Matthew Bowen has noted that on two notable occasions—2 Nephi 25:17 and 2 Nephi 29:1—Nephi combined restoration themes from Isaiah 11:11 and Isaiah 29:14 into a unified idea.[2] In rabbinic times, the practice of drawing two scriptural passages together on the basis of shared words and then interpreting them in light of each other came to be known as Gezera Shawa.[3] What makes Nephi’s Gezera Shawa especially intriguing is his potential use of a Hebrew wordplay (like a pun) on the name Joseph (yôsēp).

According to Bowen, the name Joseph comes from “the Hebrew verb yāsap, the most basic sense of which is ‘to add.’ Yāsap also has the more developed senses to ‘continue’ or ‘proceed to do’ something and ‘to do again.’”[4] Not only do these verbs sound like the name Joseph and have the same basic meaning as the name Joseph,[5] but in 2 Nephi 25:21 they, and the additional restorations which they describe, are directly linked to Joseph himself.

On a different occasion, in 1 Nephi 22, we find that Nephi added Isaiah 52:10 into his network of Isaiah references. Bowen found this addition to be “particularly noteworthy” because Nephi “apparently supplied the verb yāsap to Isaiah 52:10, where Isaiah did not previously use that verb.”[6]

The fact that Nephi repeatedly tied these Isaiah references together—on one occasion explicitly mentioning the name Joseph (yôsēp) and on another adding a form of the verb yāsap—suggests that, in Nephi’s mind, Joseph was linked to future restorations. Interestingly, Nephi wasn’t the only Book of Mormon prophet to make such a connection. Mormon boldly prophesied that surely the Lord would “again [yôsîp] bring a remnant of the seed of Joseph [yôsēp] to the knowledge of the Lord their God” (3 Nephi 5:23).[7]

So, what does Joseph, who was sold into Egypt, have to do with Isaiah’s prophecies? Perhaps the most meaningful explanation can be found in a prophecy from Joseph himself, as recited by Lehi. Joseph declared that a “seer shall the Lord my God raise up, who shall be a choice seer unto the fruit of my loins” (2 Nephi 3:6). This seer would be “great like unto Moses” (v. 9), but instead of physically leading Israelites out of bondage, he would “bring forth [God’s] word unto the seed of [Joseph’s] loins” (v. 11).

Joseph then prophesied, “And his name shall be called after me; and it shall be after the name of his father. And he shall be like unto me; for the thing, which the Lord shall bring forth by his hand, by the power of the Lord shall bring my people unto salvation” (2 Nephi 3:15). In other words, just as Joseph who was sold into Egypt brought salvation to his own family, a future seer named Joseph would bring salvation to his descendants.

Nephi and Mormon surely knew and understood Joseph’s prophecy, and they saw how it was tied to Isaiah’s prophecies about a latter-day restoration. They recognized that through a latter-day Joseph (yôsēp) the Lord would “proceed (yôsīp) to do a marvellous work,” and would “proceed (yôsīp) to make bare his arm in the eyes of all the nations,” and would “set his hand again (yôsîp) the second time to recover the remnant of his people.”[8] These beautifully integrated prophecies—along with their repeated uses of a Hebrew wordplay—help confirm that Joseph Smith, who was named after his own father, was truly the prophet of the Restoration.[9]

Concerning the growing criticism of Joseph Smith in today’s world, Elder Neil L. Andersen has taught, “The negative commentary about the Prophet Joseph Smith will increase as we move toward the Second Coming of the Savior. The half-truths and subtle deceptions will not diminish. There will be family members and friends who will need your help.”[10] To resist this rising persecution, Elder Andersen stressed, “Each believer needs a spiritual confirmation of the divine mission and character of the Prophet Joseph Smith.”[11]

How can one obtain such a witness? Among other suggestions, Elder Andersen noted that a “testimony may distill upon your soul as you read the Book of Mormon again and again.”[12] Not only does the Book of Mormon itself testify of Joseph Smith’s prophetic calling, but it does so in a way that was likely far beyond his own literary ability.[13] Importantly, Joseph, who was sold into Egypt, twice declared that he was “sure” of the Lord’s promise concerning a latter-day seer named Joseph (2 Nephi 3:14, 16). As we prayerfully read and pray concerning the Book of Mormon, we can obtain this same confidence, from the Lord Himself, that Joseph Smith is the prophet of the long-promised Restoration.

Matthew Bowen, “Onomastic Wordplay on Joseph and Benjamin and Gezera Shawa in the Book of Mormon,” Interpreter: A Journal of Mormon Scripture 18 (2016): 255–273.

[1] In several ways, Nephi’s own experiences mirrored those of the great patriarch Joseph, who was his ancestor. And it seems that Nephi intentionally crafted the story of his own journey to the promised land to draw out these similarities. See Alan Goff, “A Hermeneutic of Sacred Texts: Historicism, Revisionism, Positivism, and the Bible and Book of Mormon,” (MA dissertation, Brigham Young University, 1970), 60, 105, 130–133; Grant Hardy, Understanding the Book of Mormon: A Reader’s Guide (New York, NY: Oxford University Press, 2010), 42–44.