Why Did Nephi Appeal to So Many Earlier Testimonies of Christ? | Meridian Magazine 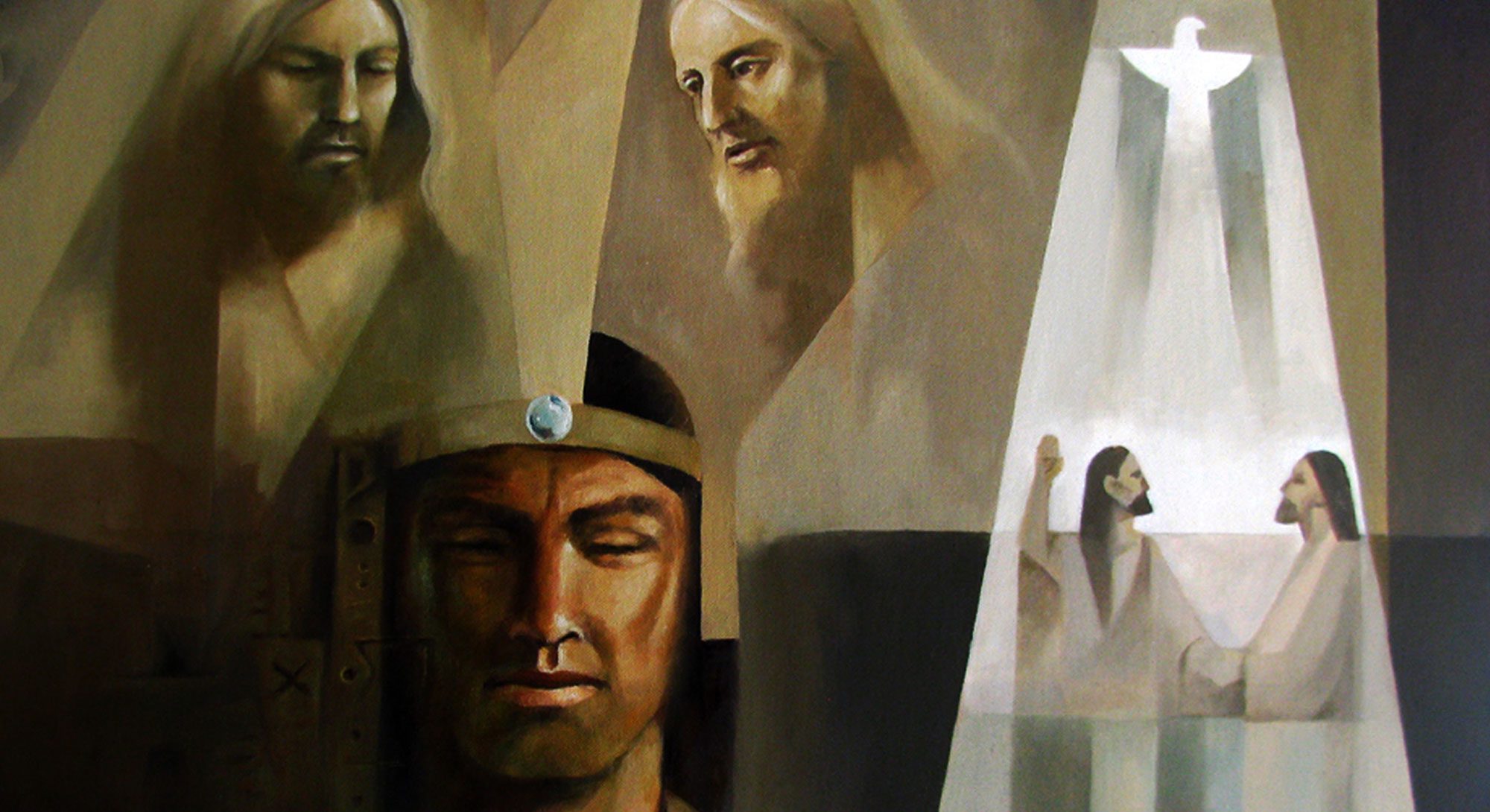 Why Did Nephi Appeal to So Many Earlier Testimonies of Christ?

“All of our fathers, even down to this time … have testified of the coming of Christ, and have looked forward, and have rejoiced in his day which is to come.”
Helaman 8:22

In trying to convince the people of Zarahemla to rectify the wickedness of their laws, Nephi appealed to the testimonies of those who long before had “testified of the coming of Christ” (Helaman 8:22). By doing so, he reminded the people of the laws of God. Corrupt judges were attempting to have Nephi put on trial (Helaman 8:1), but Nephi turned the tables on them by symbolically bringing them to trial instead.[1]

Because they had rejected the Law of Moses for their own unjust laws, the first witness he brought against them was Moses himself. After all, who could judge better than Moses if his laws were being negated? Nephi reminded them of the miracles Moses performed by the power of God (Helaman 8:11) and then pointed them toward the most important part of the Law of Moses: Christ. “Yea, did he not bear record that the Son of God should come? And as he lifted up the brazen serpent in the wilderness, even so shall he be lifted up who should come” (v. 14).[2]

Nephi then called his second witness, the Psalms, which he quotes in Helaman 8:15 (emphasis added): “And as many as should look upon that serpent should live, even so as many as should look upon the Son of God with faith, having a contrite spirit, might live, even unto that life which is eternal.” Here Nephi combined his comments on Moses with an allusion to Psalm 34:18–19 (emphasis added), talking about how Christ saved the people in the wilderness, and can still save them now: “The Lord is nigh unto them that are of a broken heart; and saveth such as be of a contrite spirit.”[3]

His next witness was Abraham, the father of the covenant between Jehovah and his people: “Yea, and behold, Abraham saw of his coming, and was filled with gladness and did rejoice.” (Helaman 8:17) This statement may have a common background with the version of Genesis 15:2 found in the Joseph Smith Translation and evidently on the plates of brass: “And it came to pass, that Abram looked forth and saw the days of the Son of Man, and was glad, and his soul found rest.”[4] Nephi then listed Zenos, Zenock, Ezias, Isaiah, and Jeremiah in quick succession. This list gave him the symbolically significant number of seven named witnesses from the plates of brass to support his witness of Christ.[5]

Nephi then moved from the Old World to the New World, using the very people in the audience as witnesses against themselves: “Now we know that Jerusalem was destroyed according to the words of Jeremiah. O then why not the Son of God come, according to his prophecy? And now will you dispute that Jerusalem was destroyed? Will ye say that the sons of Zedekiah were not slain, all except it were Mulek? Yea, and do ye not behold that the seed of Zedekiah are with us, and they were driven out of the land of Jerusalem?” (Helaman 8:20–22).[6]

Nephi continued drawing from New World prophets, citing Lehi, Nephi, and those who followed them as additional witnesses. Finally, he called the heavens and the earth to witness what he had said. “In this ye have sinned, for ye have rejected all these things, notwithstanding so many evidences which ye have received; yea, even ye have received all things, both things in heaven, and all things which are in the earth, as a witness that they are true” (Helaman 8:24, emphasis added). This juridical move likely reflects the ancient Israelite practice manifest in Isaiah 1:2, “Hear, O heavens, and give ear, O earth: for the Lord hath spoken, I have nourished and brought up children, and they have rebelled against me.”[8] Nephi’s indictment and calling of witnesses forms a superb example of what has been identified by many biblical scholars as a “prophet lawsuit.”[9]

Helaman 8 begins with the people nearly bringing Nephi to trial before local judges. But throughout this chapter, Nephi successfully called higher witnesses to testify against them before God instead. He formally put the people on divine trial, and pronounced them worthy of “everlasting destruction” but suspended the judgment if they would repent (Helaman 8:26).

Nephi knew that “at the mouth of two witnesses, or three witnesses, shall he that is worthy of death be put to death” (Deuteronomy 17:6).[10] But Nephi emphatically called many more than the required number of witnesses, urging the people to reject their flawed legal system and return to the laws authorized by God. That law was grounded in the scriptures to which he referenced so frequently.[11]

There are times in the Book of Mormon when prophets needed to stand up and criticize negative trends they saw around them. Sometimes, as in Nephi’s case, they stood alone. Many people might find themselves in a similar position in today’s world. But Nephi reminded readers of the Book of Mormon that they are never really alone in pushing back against corruption within society. Modern readers can, like Nephi, appeal to the scriptures and personal revelation in resisting any negative trends around them.

[1] The judges do not seem to be able to bring people to trial themselves. Because of the obvious conflict of interests involved they likely needed to wait for the people to do this, but they could incite a mob to bring someone to trial, as they seem to be attempting here. John W. Welch, The Legal Cases in the Book of Mormon (Provo, UT: BYU Press and the Neal A. Maxwell Institute for Religious Scholarship, 2008), 325.

[5] One should be very cautious in discussing sacred numbers in the Book of Mormon because the numbers often end up having little significance. But occasionally the numbers do seem to be important. This may be one of those cases. See Corbin Volluz, “A Study in Seven: Hebrew Numerology in the Book of Mormon,” BYU Studies Quarterly 53, no. 2 (2014): 57–83.

[6] It is important to note that Nephi is in Zarahemla at this point, as noted in Helaman 7:10, and that Zarahemla is the city where the Mulekites originally settled as noted in Omni 1:14. Therefore, it is likely that many of these people would be at least partially related to the Mulekites.

[8] It is possible that Nephi included one last witness from the Plates of Brass but that he quoted something not found in the Old Testament. He told the people they were only seeking for treasures on earth “instead of laying up for [themselves] treasures in heaven, where nothing doth corrupt.” (Helaman 8:25) This is very similar to Matthew 6:20, which could mean that both Nephi and Jesus were quoting something that was on the Plates of Brass but that is no longer available today.

[11] See also 2 Nephi 27:14: “Wherefore, the Lord God will proceed to bring forth the words of the book; and in the mouth of as many witnesses as seemeth him good will he establish his word; and wo be unto him that rejecteth the word of God!”

I have thought it curious why, of the prophets Nephi referenced as testifying of Christ, the majority of them (Zenos, Zenock, and Ezias) are missing from our version of the Old Testament. Also, the original Nephi, in 1 Nephi 19:10, when he reviews prophecies of Christ, cites the same Zenos and Zenock and adds Neum as prophesying of Christ, and the detail of the prophecies he cites make it appear that these prophets were particularly explicit in talking of Christ. I have surmised that this might be the reason that we don't have them. As Nephi explains in 1 Nephi 13, many plain and precious things were taken away, and this was part of the effort to keep many of the Jews from following Christ--taking away these books with these explicit prophecies.