Why Did Moroni Write So Many Farewells? | Meridian Magazine 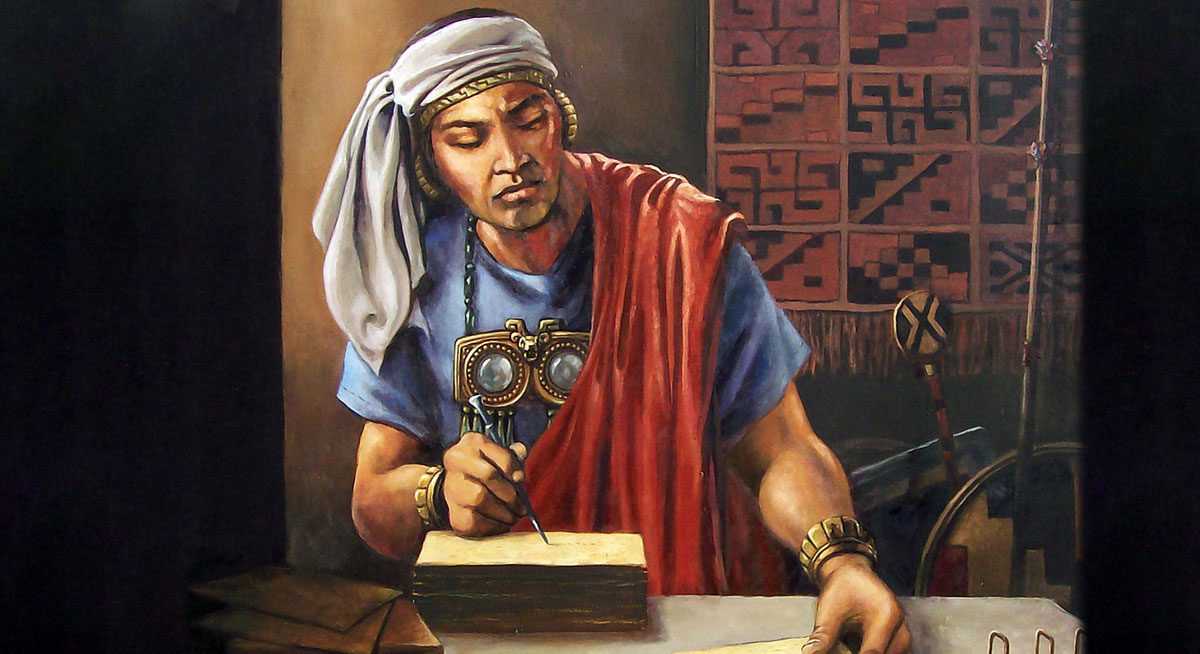 Why Did Moroni Write So Many Farewells?

“Behold I, Moroni, do finish the record of my father, Mormon.”
Mormon 8:1

Turning the page of Mormon’s concluding farewell in Mormon 7, readers are introduced to a new author: “Behold I, Moroni, do finish the record of my father, Mormon” (Mormon 8:1). Full of sorrow, Moroni explained that his father was killed by the Lamanites and that he remained “alone to write the sad tale of the destruction of [his] people” (v. 3). Moroni’s remarks in Mormon 8–9 not only finish out his father’s record,[1] but they also seem to function as his own farewell.[2]

Readers may wonder why Moroni would deliver a farewell address and then later go on to include an abridgment of the book of Ether, ten more chapters of a book bearing his own name, and two more farewell endings, one in Ether 12:38–41 and the other in Moroni 10:34. One consideration is that, as time progressed, his circumstances and perspectives may have changed and the agony of defeat may have dimmed and healed. In any event, Moroni may have welcomed the opportunity to convey different concluding messages that he felt the Book of Mormon deserved.[3]

At first, in Mormon 8–9, Moroni explained his uncertainty about the future, declaring “whether they will slay me, I know not” (Mormon 8:3), and “how long the Lord will suffer that I may live I know not” (v. 5). He reported that he couldn’t even write the intent of the record because he didn’t have “room upon the plates,” and as for “ore I have none, for I am alone” (v. 5). These verses may indicate that when writing his initial farewell, Moroni was feeling at a loss. He was running out of space and out of time, and he felt duty-bound to conclude his father’s record in case he suffered an untimely death.[4]

Under this sense of urgency, Moroni laid down the law. He issued a series of warnings to protect the record (Mormon 8:14–22), he prophesied about the conditions when the Lord would bring the record forth (vv. 26–30), he testified to future peoples (v. 35; Mormon 9:1, 7, 30), he asked a number of penetrating questions, and he declared four attestations of judgment (“still, still, still, still,” Mormon 9:14). He then challenged any who would oppose him (“who can stand?” “who can deny?” “who will despise?” Mormon 9:2–26), he stated almost two dozen commandments (vv. 27–31), he validated his work with attestations (vv. 31–35), and he concluded with three pleas that Jesus would nonetheless answer the prayers of the righteous saints, remember His covenant with the House of Israel, and bless them (v. 37).

In the ensuing years, Moroni must have eventually found enough ore to create additional plates.[5] At some point, he assumed that he would only add the book of Ether and therefore wrote his second farewell, including it in Ether 12. Here he was much less legalistic and much more conciliatory. Perhaps he had been sobered by the fate that befell not only the Jaredites but also his own people. Here he wanted the Gentiles and his brethren, the Lamanites, to know that he loved them (v. 38), that he had seen Jesus and learned from Him (v. 39), and that he commended Jesus unto them—that the grace of the Father and the Son may abide with them forever, as the Holy Ghost bears record (v. 40).

After finishing his abridgment of the Jaredite history, Moroni returned a third time, reporting: “I had supposed not to have written more, but I have not as yet perished …. Wherefore, I write a few more things, contrary to that which I had supposed” (Moroni 1:1–4). He further explained, “I write a few more things, that perhaps they may be of worth unto my brethren, the Lamanites, in some future day, according to the will of the Lord” (v. 4).[6] His submission “to the will of the Lord” is telling, suggesting that the Lord was involved—either through inspiration or direct revelation—in his decision to add his final chapters to the record.[7]

At this point, Moroni included in his record the sacred words to be used in performing priesthood ordinances (Moroni 2–6), and he copied three letters from his father Mormon that are of great worth, regarding grace, gifts, faith, hope, love (Moroni 7), baptism (Moroni 8), and the atrocities for which the Nephites were obliterated (Moroni 9).

Finally, he ended with a series of exhortations, begging people to remember, to ask, to deny not, and to come unto Christ, to be perfect in him by the grace of God (Moroni 10:32) and successful before the judgment bar of the great Jehovah (v. 34). Here, Moroni affirmed that God’s grace offers the way for all to become sanctified and no more confounded (vv. 31, 33).[8]

Moroni wrote his first farewell in the 400th year (see Mormon 8:6), approximately 15 years after the final battle at Cumorah (see Mormon 6:5), and his final farewell was delivered after the 420th year (see Moroni 10:1), 20 years after his first farewell.[9] The lengthy gap between these conclusions is significant. For a substantial amount of time, Moroni was likely uncertain what would happen to him, and after his initial farewell, he had 20 years to think about the record and what he might add to its pages.

When readers recognize that Moroni’s three farewells were written at different stages of his life and in the context of different record-keeping projects, they can better understand the purpose and meaning of each one. In the first, he spoke with the voice of justice. In the second, he found himself moved by sympathy. As Steve Walker has observed, “Through this [second] closing scenario, stunned at the finality of it, we are staring over the shoulder of Moroni as he stares over the shoulder of the eyewitness, Ether, stupefied by the utter senselessness of this total destruction.”[10]

In the third, Moroni turned the matter over to the will and grace of God. As Elder M. Russell Ballard has pointed out, “the Restoration is not an event, but it continues to unfold.”[11] So too, with Moroni, his endings for the Book of Mormon also unfolded, as he was able to revisit and add point upon point to his concluding messages.

Moroni’s three separate farewells provide readers with three different opportunities to understand the purposes of the Book of Mormon through the eyes of Moroni, its last author and record keeper. As a solemn warning to us today, Thomas poetically described Moroni as a “holy wanderer on the border of life and death, on the boundary of meaning and meaninglessness, [who] passes a note to us regarding the collapse of our own house on the top of our own final Cumorah.”[12]

Remarkably, and in spite of the depravity of his own situation, Moroni was ultimately able to deliver a message of redemption, a promise that readers could be forgiven and become “holy, without spot” (Moroni 10:33). As Walker concluded, “That bottom-line hope, stunning amid the otherwise grim finalities, dramatizes the literary reach of the” entire Book of Mormon.[13]

[2] Moroni explained that at this point he had “but few things to write” (Mormon 8:1) and that he would “write and hide up the records in the earth; and whither I go it mattereth not” (v. 4). Not only do these statements have a sense of finality to them, but according to Mark D. Thomas, Moroni’s farewell followed the “typical Nephite ending formula.” See Mark D. Thomas, “Moroni: The Final Voice,” Journal of Book of Mormon Studies 12, no. 1 (2003): 92.

[4] For Mormon’s expectation that Moroni finish the record, see Words of Mormon 1:2.

[5] It seems that during the period of peace between the Nephites and the Lamanites, Moroni may have been an apprentice to his father, helping him with the research and record-keeping responsibilities of composing the Book of Mormon. In this process, Moroni likely would have learned the metallurgical skills necessary to create his own plates. Moreover, the fact that he mentioned a lack of ore in the first place implies that if he had ore, he could make use of it. For a discussion of what may have transpired during the ten years of peace, see Book of Mormon Central, “Why Is the 10-Year Peace Treaty Important? (Mormon 3:1),” KnoWhy 228 (November 10, 2016).

[7] There are at least three plausible explanations for why Moroni felt that Ether would be his final writing project. One possibility is that Moroni wasn’t sure how much space it would take to finish his abridgment of Ether. In this scenario, he may have written his farewell remarks in Ether 12 to make sure that he gave proper closure to the text. Then when he finished and found he had more room, he included Moroni 1–10. Another possibility is that Moroni only had enough room on the plates to add the book of Ether. Then at some later time he was able to get access to enough ore to make some additional plates and add them to his record. A third possibility is that Moroni had enough room on the plates to begin with but believed that the book of Ether was the last thing the Lord wanted him to write. Then after his abridgment, the Lord inspired or explicitly commanded him to write more.

[8] It’s possible that it was in direct response to Moroni’s insecurities or dissatisfaction with his first ending that the Lord gave him further opportunities to complete the record.

[9] Moroni’s choice to conclude his father’s record in the 400th year and then conclude his own after the 420th year may correlate to time-keeping practices in ancient America. Mark Wright explained, “The majority of Classic period monuments begin with a ‘Long Count,’ which begins with a count of baktuns (400 years) and katuns (20 years). Notably, the concluding chapter of the Book of Mormon likewise begins with a count of ‘four hundred and twenty years’ (Moroni 10:1), perhaps an intentional allusion to the Maya Long Count.” See Mark Alan Wright, “Nephite Daykeepers: Ritual Specialists in Mesoamerica and the Book of Mormon,” in Ancient Temple Worship: Proceedings of the Expound Symposium, 14 May 2011, ed. Matthew B. Brown, Jeffrey M. Bradshaw, Stephen D. Ricks, and John S. Thompson (Salt Lake City and Orem, UT: Eborn Books and Interpreter Foundation, 2014), 253. See also John E. Clark, “Archaeology, Relics, and Book of Mormon Belief,” Journal of Book of Mormon Studies 14, no. 2 (2005): 46–47; Book of Mormon Central, “Why Did Samuel Make Such Chronologically Precise Prophecies? (Helaman 13:5),” KnoWhy 184 (September 9, 2016).

[10] Walker, “Last Words,” xiii. See also, Thomas, “Moroni: The Final Voice,” 98: “After ending the Nephite record twice with tales of distressing annihilation, Moroni ends a final time with a message of hope …. The three endings can be summarized, in order of appearance in the record, as past destruction 1 (the Nephites), past destruction 2 (the Jaredites), and future restoration.”