Why Did Mormon Give So Many Details About Geography? | Meridian Magazine 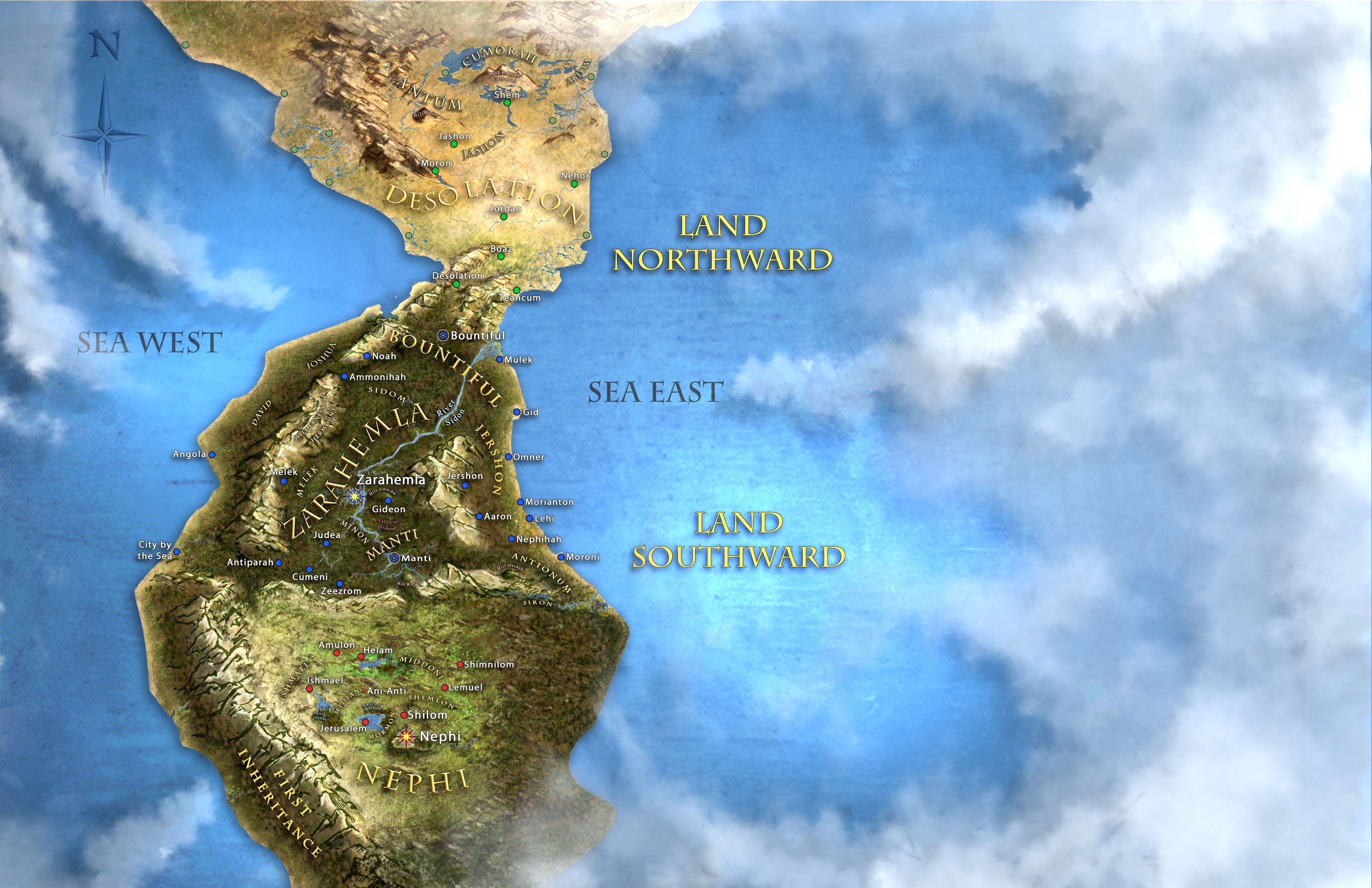 Why Did Mormon Give So Many Details About Geography?

Practically since the Book of Mormon was published, its geography has been the subject of discussion and debate.[2] John L. Sorenson, one of the foremost students on the subject, identified over 600 passages relevant to geography.[3] Cross-referencing Sorenson’s list with that of John E. Clark,[4] Randall Spackman determined that there are upwards of 1000 passages of potential geographic significance.[5]

Both Sorenson and Clark used hundreds of these passages to develop an internal reconstruction of Book of Mormon geography.[6] They mapped out the general lay of the land, and the relationship between different lands and cities without tying it to any real-world location.

Theirs are two among many internal maps which, while having some differences, demonstrate the general geographic consistency found throughout the Book of Mormon.[7]

Amidst the hundreds of passages, Alma 22:27–34 is widely understood to be the most comprehensive statement available on the configuration of Book of Mormon lands. Sorenson explained:

The nearest thing to a systematic explanation of Mormon’s geographical picture is given in Alma 22:27–34. In the course of relating an incident involving Nephite missionaries and the great king over the Lamanites, Mormon inserted a 570-word aside that summarized major features of the land southward. He must have considered that treatment full and clear enough for his purposes, because he never returned to the topic.[8]

Due to this, Alma 22:27–34 is highly discussed by Book of Mormon geographers.[9] Mormon gives readers over a dozen points of geographical information,[10] as shown in the table below.

What lay farther to the north, beyond Desolation, or farther to the south, past the land of Nephi, is left unsaid. Peoples of Lehite descent likely migrated in both directions during and after Book of Mormon times. As a result, descendants of Lehi may be found throughout the Americas,[11] even though the events in the Book of Mormon played out in a more limited sphere.[12]

After disrupting the narrative with this “geography word map,” as archaeologist V. Garth Norman has called it,[13] Mormon said, “And now I, after having said this, return again to the account of Ammon and Aaron, Omner and Himni, and their brethren” (Alma 22:35). It is clear from this that Mormon knew he had interrupted the narrative flow. Given the limited space, and careful way Mormon crafted his text, he must have had good reasons for inserting these details, along with the hundreds of other references to geography found throughout the text.

One likely reason is that Mormon, who was both a historian and military leader, knew how important geography is to understanding historical events, especially military history. All the many hundreds of geographic details scattered throughout the text can get confusing. There had already begun to be some movements back and forth between the different lands: battles, dissentions, and migrations. Mormon was aware that there were about to be several more, including his detailed accounts of troop movements and battle strategies during the great seven years of war in Alma 43–62.

Amidst this dizzying array of details, the text’s demonstrable geographic consistency shines forth as a powerful witness to the sophistication and complexity of the Book of Mormon.[14] Upon careful inspection, Grant Hardy, a professor of history, has found, “It requires considerable patience to work out all the details of chronology, geography, genealogy, and source records, but the Book of Mormon is remarkably consistent on all of this.”[15] From this observation, Hardy concluded:

The complexity is such that one would assume the author worked from charts and maps, though Joseph Smith’s wife—the person who had the longest and closest view of the production of the text—explicitly denied that he had written something out beforehand that he either had memorized or consulted as he translated.[16]

Mormon probably knew how confusing all the many details were getting. He realized that without some kind of broader picture of Nephite lands, ensuing narratives about missionary travels, commercial relationships, political divisions, and prophetic fulfillments would be difficult, if not impossible, to follow. As V. Garth Norman noted, “Mormon gave very specific geographic details at times … that could have no other purpose than to paint the landscape where these events occurred.”[17]

All this geographical information not only adds another layer of complexity, but also strengthens the sense that the text describes a true historical reality. As John L. Sorenson pointed out in 2002, “Inconsistencies that might be expected of a fraudulent work … are notably absent in the Book of Mormon.”[18] On the other hand, “It seems unlikely that this consistency could have been obtained unless the author(s) had directly experienced some particular real-world setting, not an imaginary place.”[19]

As a youthful traveler, long-time military leader, and trusted steward over a library of sacred records, Mormon certainly had intimate and direct experience with the landscape and information about it. Despite the destructions reported in 3 Nephi 8–9, he knew and recognized many of the lands, rivers, valleys, mountains, waters, and seas mentioned in his historical sources. Having worked on this record with his father, Moroni also went out of his way to testify that their record is true and that they “lie not” (Moroni 10:26).

This was a land that Mormon knew, and no doubt a land that he loved, and a land which he was pained to see swept away in so much warfare, sin, and violence (Mormon 2:11–15). In Alma 22:27–34, and in the many other geographic details running throughout, Mormon and the other authors give today’s readers accurate glimpses of a promised land tragically lost.

[3] John L. Sorenson, Mormon’s Map (Provo, UT: FARMS, 2000), 9: “Overall, over 550 verses in the Book of Mormon contain information of geographical significance: the account is steeped with information about the where of Nephite events.” However, John L. Sorenson, Mormon’s Codex: An Ancient American Book (Salt Lake City and Provo, UT: Deseret Book and Neal A. Maxwell Institute for Religious Scholarship, 2013), 17, 119 places the number as 600. For an annotated listing of every passage Sorenson deemed geographically relevant, see Sorenson, Geography of Book of Mormon Events, 215–315.

[9] There are 31 references to Alma 22 in Sorenson, Mormon’s Map; 18 in Clark, “Key for Evaluating Nephite Geography.” Speaking of Sorenson and Clark, Spackman, “Interpreting Book of Mormon Geography,” 26 stated: “Both authors begin with Alma 22 and quickly build interpretative links to other passages of text.” Also see Norman, Book of Mormon–Mesoamerican Geography, 3–5; Allen and Allen, Exploring the Lands, 402–416, 422–426; Jonathan Neville, The Lost City Zarahemla: From Iowa to Guatemala—and Back Again (Rochester, NY: Legends Library, 2015), 273–310; Jonathan Neville, Moroni’s America: The North American Setting for the Book of Mormon (Digital Legend, 2015), 25–32; 285–320; Gregory L. Smith, “‘From the Sea East Even to the Sea West’: Thoughts on a Proposed Book of Mormon Chiasm Describing Geography in Alma 22:27,” Interpreter: A Journal of Mormon Scripture 19 (2016): 355–382.

[10] Textual accuracy is crucial when trying to determine the specifics of Book of Mormon geography. For analysis of all potential variants in Alma 22:27–34, see Skousen, Analysis of Textual Variants, 2057–2072.

[16] Hardy, Understanding the Book of Mormon, 7. On the production process according to Emma and other eye-witnesses, see Neal Rappleye, “‘Idle and Slothful Strange Stories’: Book of Mormon Origins and the Historical Record,” Interpreter: A Journal of Mormon Scripture 20 (2016): 29–32; Michael Hubbard Mackay and Gerrit J. Dirkmaat, “Firsthand Witness Accounts of the Translation Process,” in The Coming Forth of the Book of Mormon: A Marvelous Work and a Wonder, ed. Dennis L. Largey, Andrew H. Hedges, John Hilton III, Kerry Hull (Salt Lake City and Provo, UT: Desert Book and Religious Studies Center, Brigham Young University, 2015), 61–79; Daniel C. Peterson, “A Response: What the Manuscripts and the Eyewitnesses Tell Us about the Translation of the Book of Mormon,” in Uncovering the Original Text of the Book of Mormon: History and Findings of the Critical Text Project, ed. M. Gerald Bradford and Alison V.P. Coutts (Provo, UT: FARMS, 2002), 67–71; Daniel C. Peterson, “Editor’s Introduction—Not So Easily Dismissed: Some Facts for Which Counterexplanations of the Book of Mormon Will Need to Account,” FARMS Review 17, no. 2 (2005): xi–xxiv, xxx–xxxii. All 202 accounts from eye-witnesses and others are included in John W. Welch, “The Miraculous Translation of the Book of Mormon,” in Opening the Heavens: Accounts of Divine Manifestations, 1820–1844, ed. John W. Welch (Provo, UT: BYU Studies, 2005), 118–213.

[18] Sorenson, “How Could Joseph Smith Write So Accurately,” 267. Also see John L. Sorenson, Images of Ancient America: Visualizing Book of Mormon Life (Provo, UT: FARMS, 1998), 188: “The consistency cannot be accounted for in terms of Joseph Smith, for his translation of the volume was dictated at such a pace and published with so little revision of content that he could not have accurately crafted the picture of spatial relations involved in the complex story.”

[19] Sorenson, Mormon’s Codex, 17, cf. p. 119: “This consistency of information indicates that the author’s had firsthand experience of a specific physical scene.” He also made this same point in Sorenson, Images of Ancient America, 188: “The internal consistency of the geographical statements in the Book of Mormon … must be accounted for by assuming the primary author … had a definite mental map in mind.”

The only BoM model that does not have to continually redefine scripture is the South American model with the Amazon basin underwater before Christ. https://nephicode.blogspot.com/2016/02/keys-to-finding-land-of-promise.html