Why Did Joseph Smith File for Bankruptcy? | Meridian Magazine 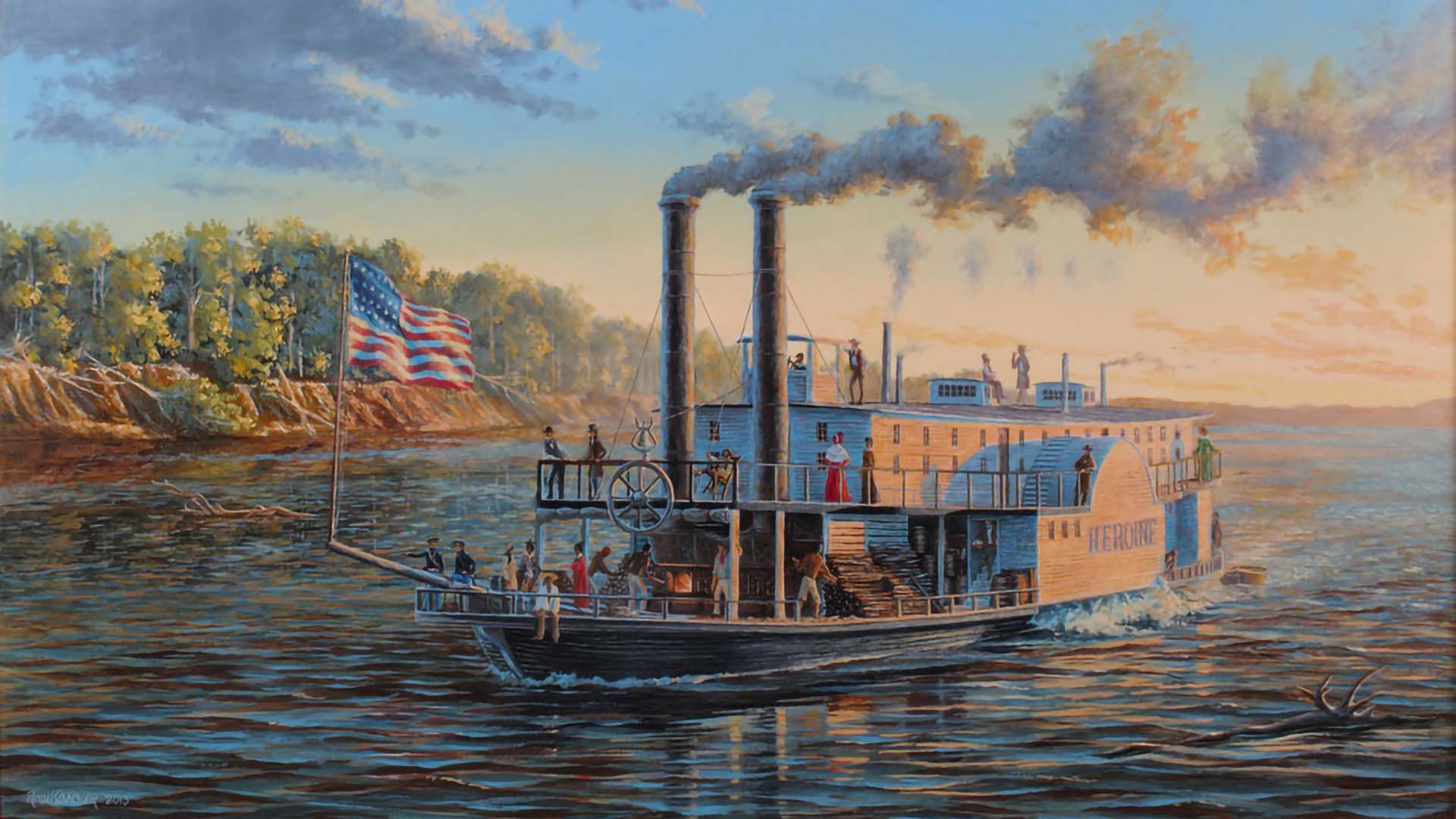 Why Did Joseph Smith File for Bankruptcy?

“And again, verily I say unto you, concerning your debts—behold it is my well that you shall pay all your debts.” Doctrine and Covenants 104:78

In the 1840s, Nauvoo’s position along the Mississippi River had the potential to provide a plethora of economic opportunities for the Latter-day Saints—if they could find a way to transport people and goods through a narrow channel around the treacherous Des Moines rapids, which lay just to Nauvoo’s south. To that end, Joseph Smith and four other entrepreneurial Latter-day Saints had purchased a former government steamboat—appropriately called the Des Moines—at a public auction in Quincy, Illinois, on September 10, 1840. Peter Haws was the principal purchaser, and Joseph, his brother Hyrum, and two others signed the purchase as guarantors.1

“The boat weighed 93 tons, was 120 feet long, and was about half the size of an average Mississippi steamer—hence, admirably suited to negotiate the rapids.”2 The new Latter-day Saint owners renamed it Nauvoo and “put it to work transporting passengers and freight up and down the Mississippi.”3 Unfortunately, after just two months of operations, the Nauvoo was run aground, and “the damage was serious enough that the Nauvoo never operated again under Mormon control.”4 This wreck sank any hopes the Saints had of using the Nauvoo to bring economic opportunities to the city and drowned the purchasers in debts that were hard to pay off—especially without the income the operations of the steamer had been expected to bring in.5

The Latter-day Saint owners had sued the river pilots for negligently operating the steamer and had writs for their arrest issued just a couple of weeks after the wreck. But when the pilots were released on bail, they fled the state.6 Attempts to collect from investors who had purchased majority interests in the steamer’s operations also failed.7 Furthermore, the principal buyer of the steamboat, Peter Haws, was evidently nowhere to be found when the US government came to collect on the dept owed for the purchase.8 As a result, the obligations to pay fell squarely on the shoulders of Joseph Smith and the other guarantors.

The debt came due in May 1841, but it would be another year before the US attorney for Illinois, Justin Butterfield, filed suit to collect on the debt.9 By this time, Joseph had many other mounting debts from both personal and Church-related purchases, which altogether totaled over $73,000.10 Earlier in 1842, a new bankruptcy act was passed by congress “to help relieve debtors from the nationwide depression that had begun with the Panic of 1837.”11 In April 1842, two months before default judgment was rendered on the steamboat debt, Joseph Smith and several other Latter-day Saints took advantage of this new law and filed for bankruptcy.12

At the time, nearly all bankruptcy filings in Illinois were accepted—only 8 out of the 1,433 filings were opposed. Joseph’s and Hyrum’s filings, however, were two of those eight, thanks in part to allegations of fraud made by John C. Bennett. Bennett was the former mayor of Nauvoo who had helped Joseph Smith and others draft the Nauvoo charter and shepherd it through the legislative approval process.13 He had since left the Church and had a falling out with Joseph and was spreading various rumors and allegations against him.14

Bennett alleged that Joseph had fraudulently transferred nearly 300 acres of land to the Church in order to avoid losing it in the bankruptcy suit. In the bankruptcy act, any property deed made “in contemplation of bankruptcy” was considered “utterly void,” thus preventing people from fraudulently entering into deeds they had no intention of paying or from transferring the ownership of assets just before declaring bankruptcy to prevent it from being taken.15 Under the law, any conveyance of property more than two months before filing for bankruptcy “was presumed to be valid and legal.”16

The property in question—239 town lots in Nauvoo—had originally been purchased for the benefit of the Church, and its formal transfer to the Church had been signed and notarized in October 1841 after “the Quorum of the Twelve had agreed that Joseph should separate Church property from his own assets” during that month’s general conference.17 This was well before the bankruptcy act had even passed and six months before Joseph applied for bankruptcy himself. Thus, the transfer of land was legal and valid.

Despite a lack of evidence for fraudulent activities, Butterfield (the US attorney for Illinois) opposed Joseph’s and Hyrum’s application for bankruptcy after investigating land records in Nauvoo.18 Claims of fraud, however, may have just been a pretense. The real issue seems to have been that the two owed a debt to the federal government, and government officials “were determined that the steamboat debt must be paid.”19

When Butterfield actually met with Hyrum Smith, along with representatives acting on Joseph’s behalf, in Springfield, Illinois, he “permitted Hyrum to be discharged in bankruptcy and recommended approval of a proposal made by Joseph’s representative … to settle the entire debt to the United States.”20 A month later, Butterfield showed “respect for Joseph’s financial integrity” by accepting promissory notes as payment for lawyer fees in a different case.21 For a variety of reasons, it would be another decade—well after Joseph’s death—before the debt was completely settled, but the federal judge involved in the case found no evidence of fraud on Joseph’s part.22

Some have tried to use the details of this bankruptcy case to sully Joseph’s character, credibility, or reputation. Joseph, however, did not act dishonorably. Like others during the hard economic times of the early 1840s, Joseph was within his legal rights and duties to both his partners and the creditor to seek debt relief through the newly enacted federal bankruptcy act. His debts had accrued largely because of circumstances beyond his control: Joseph had not taken any unusual steps or assumed speculative risks. The shipwreck that sank the steamboat Nauvoo—and Joseph’s economic opportunities with it—was not Joseph’s fault.

Even though the steamboat pilots fled the state to escape liability, Joseph honorably tried to resolve the debt. By applying for bankruptcy, Joseph allowed for an independent judge to sort out who owed how much to whom. The filing allowed himself and others involved to gather assets and determine what resources were available to pay off the debt. Matters could have been settled quickly had the sole creditor of the debt been anyone other than federal government. An ordinary creditor would not have been able to enforce its claim, and the debt would have been discharged in the bankruptcy.

Despite the steamboat wreck—and the debt and legal complications it caused—Joseph did not let it distract him from his greater purpose. Joseph spent these final years of his life dedicating his time to building the kingdom of God at Nauvoo through working on the temple, organizing the Relief Society, giving inspiring speeches (including the King Follet discourse), publishing the Book of Abraham, organizing and speaking to stakes around Nauvoo, studying his Greek Lexicon, writing the letter to John Wentworth that contains the Articles of Faith, serving as mayor of Nauvoo, greeting thousands of new arrivals, launching his campaign for president of the United States, and many other things.

Like Joseph, most people face a variety of trials and challenges that may, at times, seem insurmountable. Joseph Smith is an example to all on how to exercise faith and go about doing good and making a positive difference for those around us even in the face of daunting personal challenges.