Why Did Joseph Smith Attempt to Secure the Book of Mormon Copyright in Canada? | Meridian Magazine 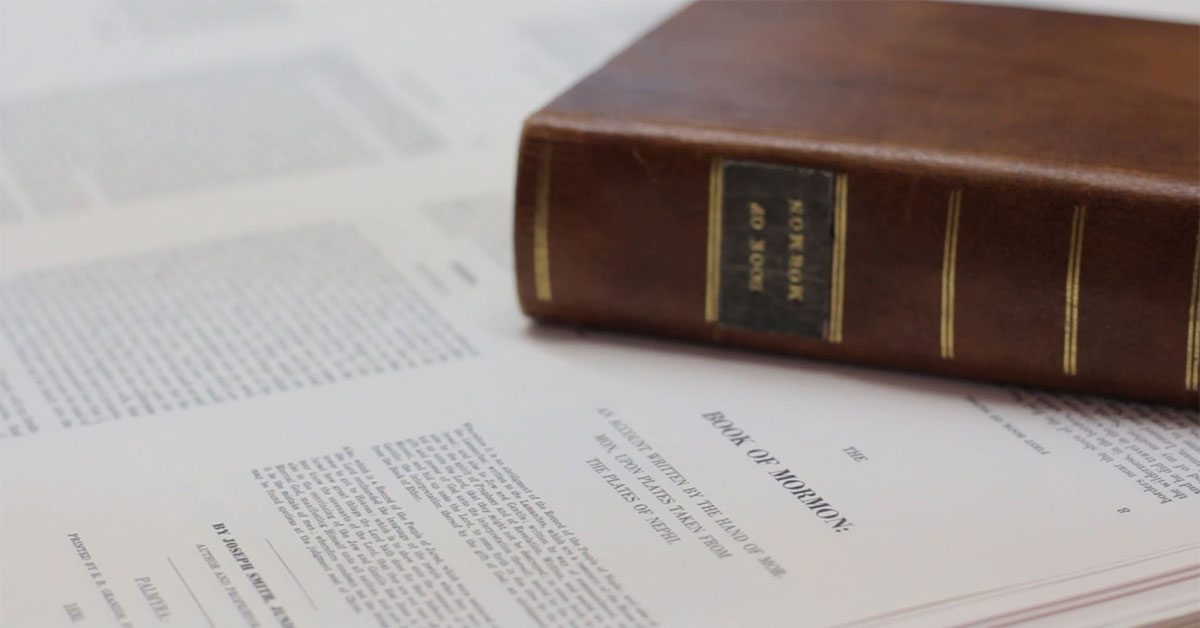 “And this is the blessing which hath been bestowed upon us, that we have been made instruments in the hands of God to bring about this great work.” Alma 26:3

Sometime in early 1830 (probably between January and early March), as the Book of Mormon was at press, Joseph Smith received a revelation instructing him to secure the copyright for the Book of Mormon in Canada. “Like the American copyright [Joseph] Smith had obtained in June 1829, a Canadian copyright would help protect the Book of Mormon from those who sought to illegally reprint it in the British dominion of Canada.”1 The revelation, preserved in what is called “A Book of Commandments & Revelations” (or Revelation Book 1),2 instructed Oliver Cowdery, Joseph Knight Sr., Hiram Page, and Josiah Stowell to “be diligent in securing the copyright of my work [the Book of Mormon] upon all the face of the earth.” This they were told to do “with an eye single to [God’s] glory, that it may be the means of bringing souls unto salvation.” To accomplish this, the Lord instructed these men to travel to Kingston, Ontario, Canada opposite of Palmyra across Lake Ontario. There the Lord said he would “grant unto [his] servant [Joseph Smith] a privilege that he may sell ​a copyright.” The success of the mission, the Lord made clear, was contingent upon certain factors, including “if the people harden not their hearts against the enticing of my spirit and my word. For behold, it lieth in themselves to their condemnation or to their salvation.”3

The purpose for securing and selling a copyright of the Book of Mormon in Canada­—rather than the copyright (a subtle but important legal distinction)—was to ensure that if the book were to be republished outside the United States, Joseph Smith, as the legally designated “author and proprietor,”4 would retain the legal intellectual property in the book and receive appropriate monetary compensation from sales.5 “Because a popular book [in the early nineteenth century] was usually reprinted in other countries without authorization at any rate in absence of international copyright laws,” selling a copyright to the Book of Mormon for the four provinces of Canada would have “hastened the printing and distribution of the book in that part of the British Empire.”6

The urgency for Joseph Smith to secure additional protection for his copyright to the Book of Mormon was punctuated by the fact that in January 1830 Abner Cole (a former justice of the peace!) pirated and unlawfully published lengthy excerpts of the Book of Mormon in the Reflector, a newspaper that was printed in the same print shop as the Book of Mormon. Writing under the pseudonym Obadiah Dogberry, Cole lampooned the published excerpts of the Book of Mormon with his satirical Book of Pukei. Rightly concerned with the violation of his copyright, Joseph confronted the pugnacious Cole and convinced him to agree to arbitrate the matter, which apparently was enough to resolve the matter either immediately or within short order.7

Although it is not entirely clear if all four men, or only Cowdery and Page, travelled to Kingston, what is clear is that they failed to sell a copyright to the Book of Mormon.8 Nearly six decades later in his 1887 publication An Address to All Believers in Christ, David Whitmer, one of the Three Witnesses to the Book of Mormon, provided a retelling of this episode that was heavily tinted by his post-disaffection cynicism towards Joseph Smith. According to Whitmer, “it had been suggested . . . that some of the brethren might go to Toronto [Kingston], Canada, and sell the copy-right of the Book of Mormon for considerable money.” The Prophet was persuaded by his brother Hyrum to seek a revelation authorizing the enterprise, which he did through the seer stone. After the trip’s failure, Whitmer and others “asked Joseph how it was that he had received a revelation from the Lord . . . and the brethren had utterly failed in their undertaking.” The answer from a purported subsequent revelation troubled Whitmer: “Some revelations are of God: some revelations are of men: and some revelations are of the devil.” Not content with this explanation, Whitmer himself could only conclude, “So we see that the revelation to go to Toronto [sic] and sell the copy-right was not of God, but was of the devil or of the heart of man.”9 Some critics of the Book of Mormon have latched onto Whitmer’s account since it portrays Joseph as either a naïve dupe or, potentially worse, a false prophet inspired by Satan.10

However, David Whitmer’s late account is contradicted in some key respects by Hiram Page, who provided his own version of events in an 1848 letter to William McLellin.11 Importantly, unlike Whitmer, Page was informed by the specifics laid out in the revelation. This explains why Page reiterated the conditional nature of the revelation (“we were to go to Kingston where we were to sell [a copyright] if they would not harden their hearts”12), a major feature of the revelation completely neglected by Whitmer. In addition, Page’s takeaway from the incident was drastically different from Whitmer’s. “Page . . . left no indication in his recollection that he was bitter about the revelation or his trip to Canada.”13 In his own words, Page concluded that from his and Oliver’s failure he learned “how a revelation may be received and the person receiving it not be benefitted.”14 At no point did Page express any doubt about the veracity of the revelation itself.

An important truth that Joseph Smith learned as he endeavored to translate and publish the Book of Mormon was that God would not allow His sacred work to be confounded by the conscious deceits of men. “The works, and the designs, and the purposes of God cannot be frustrated, neither can they come to naught,” Joseph learned from a July 1828 revelation. “Remember, remember that it is not the work of God that is frustrated, but the work of men” (Doctrine and Covenants 3:1–3). In an important way, Joseph’s custody of the golden plates and his charge to translate and publish the Book of Mormon was a probationary period where he was tutored in the fundamental principles of the Gospel, including the principles of repentance and enduring to the end.15

Although the mission to secure a copyright for the Book of Mormon in Canada was ultimately not successful, one need not conclude that Joseph received a false revelation, as David Whitmer would later erroneously believe. Marlin K. Jensen, former Church Historian and Recorder, explains how in the past historians have relied on later sources in piecing together this incident. With the new information that came to light with the rediscovery of Revelation Book 1, however, older conclusions required some reevaluation. “Although we still do not know the whole story,” Jensen concluded, “particularly Joseph Smith’s own view of the situation, we do know that calling the divine communication a ‘failed revelation’ is not warranted.”16

Even if one were to perceive the revelation to have been flawed, nevertheless, as Elder Jeffrey R. Holland and his son Matthew learned from their own experience, it could suggest that “the Lord may guide us down what seems to be the wrong road—or at least a road we don’t understand—so, in due time, He can get us firmly and without question on the right road. Of course, He would never lead us down a path of sin, but He might lead us down a road of valuable experience. Sometimes in our journey through life we can get from point A to point C only by taking a short side road to point B.”17

As with the Zion’s Camp expedition of 1834,18 even if the ultimate goal of the Canada mission was not successful, it was still a learning opportunity for those involved. “[W]hat did Joseph Smith accomplish by conveying to the emissaries the revealed command that they go to Kingston?”

He commissioned them to go, as author’s agents, to sell a right to his copy in Canada as part of an effort to obtain funds necessary to pay the printer in Palmyra. This was also a necessary step in complying with the Lord’s injunction that the Prophet’s copyright be secured in all the world generally and be secured in the four Canadian provinces specifically by seeking to find a willing publisher in Canada who would purchase the right so that piracy would be thwarted, the integrity of the text could be preserved, and the word of God could be promulgated in that land. The effort was consistent with legal principles in the United States and Canada. And no doubt it reinforced in the minds of the early brethren the importance and value of the copyright held by the Prophet.19

Stephen K. Ehat, “‘Securing’ the Prophet’s Copyright in the Book of Mormon: Historical and Legal Context for the So-called Canadian Copyright Revelation,” BYU Studies 50, no. 2 (2011): 5–70.

1.Michael Hubbard MacKay and Gerrit J. Dirkmaat, From Darkness unto Light: Joseph Smith’s Translation and Publication of the Book of Mormon (Provo and Salt Lake City, UT: Religious Studies Center, Brigham Young University, and Deseret Book, 2015), 214. For an exhaustive analysis, see Stephen K. Ehat, “‘Securing’ the Prophet’s Copyright in the Book of Mormon: Historical and Legal Context for the So-called Canadian Copyright Revelation,” BYU Studies 50, no. 2 (2011): 5–70. On the American copyright for the Book of Mormon, see MacKay and Dirkmaat, From Darkness unto Light, 164; Nathaniel Hinckley Wadsworth, “Copyright Laws and the 1830 Book of Mormon,” BYU Studies 45, no. 3 (2006): 77–99.

5.Ehat, “‘Securing’ the Prophet’s Copyright in the Book of Mormon,” 54–56, clarifies that, legally speaking, with the mission to Kingston Joseph was not giving away the complete rights to the Book of Mormon, but rather was attempting to secure post-publication protection for the text as it was republished in subsequent editions. He was attempting to “secure” the copyright (meaning the legal protection to print and distribute the book) in Canada while also looking to sell a copyright, meaning, essentially, granting a license to another printer to sell and distribute the book with authorization.

6.MacKay and Dirkmaat, From Darkness unto Light, 214. The revelation specified that both temporal and spiritual blessings would be gained by selling a copyright of the Book of Mormon so “that [the Lord’s] work be not destroyed by the workers of iniquity.” Revelation, circa Early 1830, 31, spelling and punctuation standardized. While this may have been in reference to securing funds needed for the printing of the Book of Mormon or protecting Martin Harris’s guarantee of full payment for the printing, it also likely entailed meeting the temporal needs of Joseph Smith’s family in laying the groundwork for the founding of the Church of Christ later in April 1830. Ehat, “‘Securing’ the Prophet’s Copyright in the Book of Mormon,” 15–17.

10.John Ankerberg and John Wledon, What Do Mormons Really Believe? (Eugene, OR: Harvest House, 2002), 260–263. By attempting to sell a copyright to the Book of Mormon, others have attempted to portray Joseph as “in effect . . . ‘throwing in the towel,’ ‘selling the farm,’ entirely ‘giving up,’ ridding himself of all right to publish the book everywhere simply to obtain protection (and money) at least.” Ehat, “‘Securing’ the Prophet’s Copyright in the Book of Mormon,” 55, emphasis in original.