Why Did John Whitmer Continue to Testify of the Book of Mormon? « Meridian Magazine 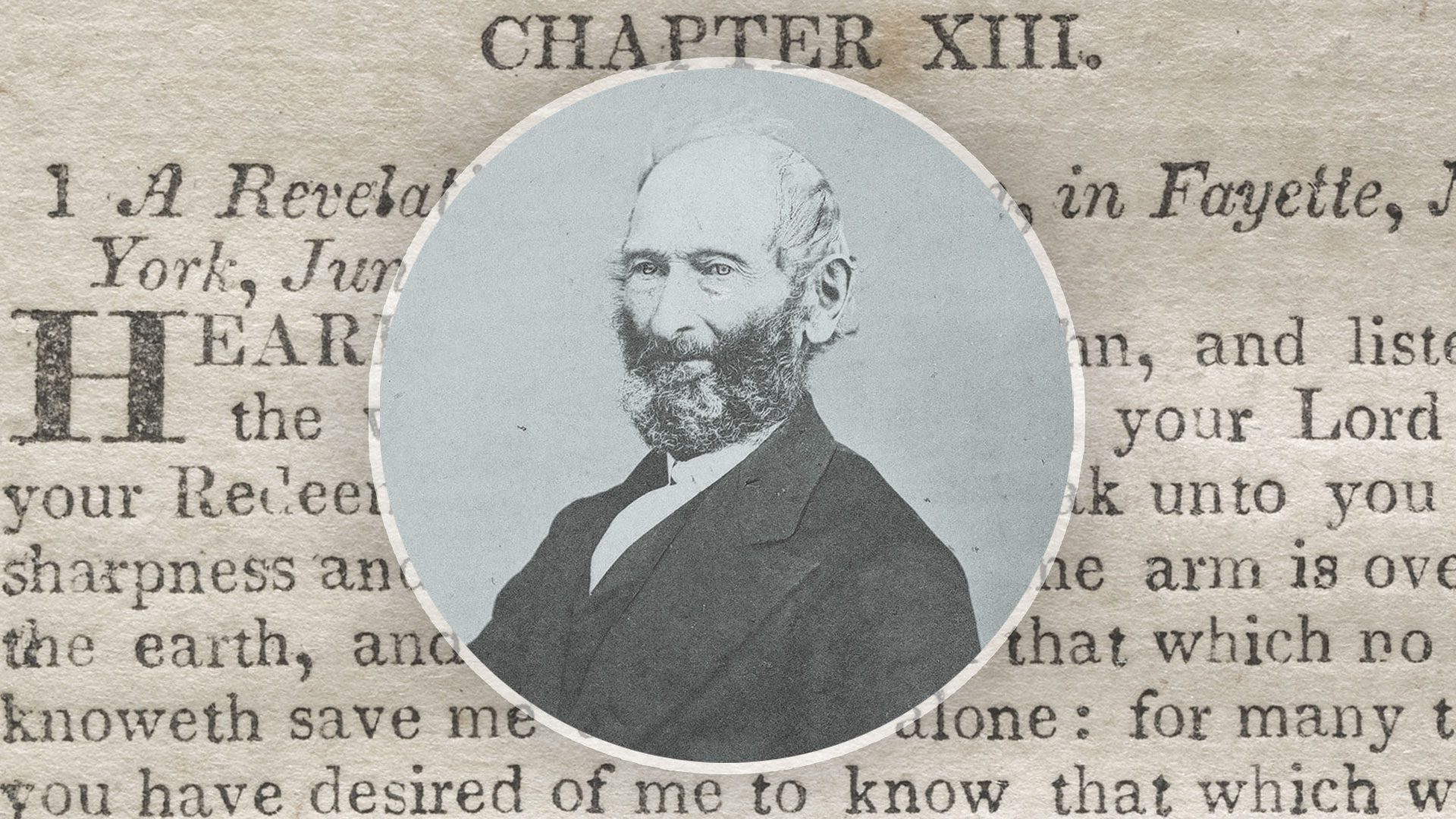 Why Did John Whitmer Continue to Testify of the Book of Mormon?

When John Whitmer met the Prophet Joseph Smith for the first time, in early June 1829, he “desired … to know [from the Lord] that which would be of the most worth” for him to do (D&C 15:4). Through Joseph, the Lord revealed that “the thing which will be of the most worth unto [John Whitmer] will be to declare repentance unto this people, that you may bring souls unto me” (D&C 15:6). He was baptized very shortly thereafter, in mid-June 1829.1

Eager to assist in the Lord’s work, John became an immediate asset to Joseph Smith, briefly acting as a scribe for the Book of Mormon translation when Oliver Cowdery needed a rest.2 After the translation, around the end of June, of the Book of Mormon was complete, he accompanied the Smith family and others back to Palmyra, where he saw and hefted the plates, becoming one of the Eight Witnesses.3 With the other seven who saw and hefted the plates, he affixed his name to a statement declaring “with words of soberness” that they had “seen and hefted, and know of a surety that [Joseph] Smith has got the plates of which we have spoken.”4

After the Church was organized in April 1830, John continued to contribute in many important ways. When Joseph first received news of the growing number of converts in Kirtland, Ohio, John Whitmer was the one he sent out to provide much needed leadership to the Saints in that area.5After Joseph got settled in Kirtland and others were beginning to gather there, in March 1831 the Lord called John to “write and keep a regular history” as well as to assist Joseph “in transcribing all things which shall be given you” (D&C 47:1).

John was initially reluctant to act as a historian for the Church, but once it was confirmed to be the Lord’s will, he diligently fulfilled his task, writing a 96-page manuscript history which he continued to work on even after becoming estranged from Joseph Smith.6 He also was a dutiful scribe, assisting Joseph Smith by taking down dictation of his translation of the Bible. In 1833, he also compiled and transcribed copies of nearly all the revelations prepared for inclusion in the Book of Commandments (a precursor to the 1835 Doctrine and Covenants).7

John regularly spoke at conferences and would use these occasions to testify of the Book of Mormon. At a conference in New Portage, Ohio in 1835, for example, he “gave a short relation of the facts connected with the translation of the book of Mormon,” and testified “openly, candidly, and seriously of what he has seen, hefted and handled with his own hands.”8 He also served as editor of the newspaper, the Latter-day Saints’ Messenger and Advocate, for several months in 1835–1836. When he stepped down as editor in March 1836, he again offered a serious and candid affirmation of his witness of the Book of Mormon:

Unfortunately, just a couple years later John and other members of the Whitmer family left the Church. The reasons for this are complicated, and include social, political, ecclesiastical, and economic factors. What is clear and impressive, however, is that even in the thick of his disaffection and the surrounding controversies, John stuck to his testimony of seeing and handling the plates. In 1839, as John Whitmer and a group of other dissidents tried to pressure Theodore Turley into denying that Joseph Smith was a prophet, Turley turned the pressure back on them and confronted John directly about his testimony of the Book of Mormon.

“You have published to the world that an angel did present those plates to Joseph Smith,” Turley said to John Whitmer. John replied, “I now say, I handled those plates; there were fine engravings on both sides. I handled them.” But, he admitted that he could not read the engravings, and so did “not know whether [the translation] is true or not.”10 John Whitmer’s confidence in Joseph Smith’s prophetic ability was shaken, but he still knew what he had seen and handled with his own hands and eyes, and could not deny it.

Although he never returned to the Church, John Whitmer’s confidence in the divine origins of the Book of Mormon was restored, and over the years he left many more statements affirming both his experience as one of the Eight Witnesses and the truth of the Book of Mormon.11 He lived the longest of all the Eight Witnesses, and as such he took it upon himself to act as spokesman for the rest of the group in his final years.12 In a letter written in March 1876, about two years before his death, he wrote:

I have never heard that any one of the three or eight witnesses ever denied the testimony that they have borne to the Book published in the first edition of the Book of Mormon. … Our names have gone forth to all nations, tongues and people as a divine revelation from God. And it will bring to pass the designs of God according to the declarations therein contained.13

John Whitmer was a man of his word and continued to testify of the Book of Mormon when called upon to do so. Knowing the unusual nature of this shared sacred experience, John spoke not only on his own behalf, but also for the others.

The honest seeker cannot help but wonder why someone like John Whitmer would persist so consistently in his witness of both seeing and physically handling the plates. Why, even as he harbored uncertainties about the divinity of the book, did he still insist he personally had seen and handled the plates with their fine engravings? And why, over the next 40 years, did his own confidence in the Book of Mormon’s divine origins remain firm even as he and the rest of the Whitmer clan lost faith in virtually everything else related to Joseph Smith’s prophetic call?14

Those wishing to dismiss the clear and powerful testimony of John Whitmer and the other Eight Witnesses have often cited the third-hand claim made by Stephen Burnett, that “the eight witnesses never saw them [the plates] & hesitated to sign that instrument for that reason.”15 However, John Whitmer directly contradicted this when he declared, as quoted earlier, that he had “no hesitancy” in affirming the Book of Mormon as a divine revelation, and “with all confidence have signed my name to it.”16 Even when, as Turely related, John did hesitate to affirm the divinity of the Book of Mormon, he still did not deny that he and others had seen and handled the plates.

Others claim the Eight only saw and hefted the plates while covered or in a box, but this too is directly contradicted by John Whitmer. In an interview recorded by Wilhelm Poulson, shortly before John’s death, he was specifically asked if the plates were covered when he saw them. “No,” John answered, “[Joseph] handed them uncovered into our hands, and we turned the leaves sufficient to satisfy us.” The plates, based on this tangible examination, were “as material as anything can be.”17

John Whitmer thus testified knowing the physical reality of what he had touched and handled. To him, this matter truly mattered. His clear statements about this experience ultimately leave only one reasonable explanation. As Richard Lloyd Anderson observed:

His actual handling of the plates is the only plausible explanation for the seriousness with which this conservative farmer shared his testimony with Mormon visitors and non-Mormon associates. One may surely rely on his ability to report whether or not he lifted and handled a metal object of substantial weight.18

Today, all who embrace the Restoration of the Gospel of Jesus Christ should appreciate the contributions of John Whitmer to the early history of the Church. Most of all, they should value his willingness through thick and thin to testify of his unmistakable experience with the plates and to give voice to the rest of the Eight Witnesses throughout his life.

3.Lucy Mack Smith, Biographical Sketches, in Larry E. Morris, ed., A Documentary History of the Book of Mormon (New York, NY: Oxford University Press, 2019), 433. Lucy records that the group of eight went out to secluded place on the Smith farm to see the record. John Whitmer himself remembered that it was at the Smith farm that they saw the plates, but said it happened within the walls of the Smith home, and that they saw them in two separate groups. See P. Wilhelm Poulson Interview, July 31, 1878, in Morris, Documentary History, 453–454.

4.The Testimony of Eight Witnesses.

10.Thomas Bullock’s Account, ca. 1845, in Morris, Documentary History, 451. Some have tried to use this account to discredit the Eight Witnesses’ testimony, because John Whitmer reportedly told Turley “they were shown to me by a supernatural power” (see Morris, Documentary History, 451). Careful review of the original document, however, reveals ambiguity as to whether this is meant to be a direct quote from John, a paraphrase from Turley, or something else. See the discussion in Morris, Documentary History, 420–421. In any case, if he did indeed say something to that effect, it is likely that John merely meant to say that it is only by the will and power of God that anyone could see the plates—regardless of whether the event was “miraculous” or mundane. The rest of the historical record makes clear that John Whitmer testified to seeing and handling the plates as an ordinary, material experience.

14.On the evolution of the Whitmers’ beliefs, and their increasing loss of faith in everything but the Book of Mormon, see H. Michael Marquardt, “David Whitmer: His Evolving Beliefs and Recollections,” in Scattering of the Saints: Schism within Mormonism, ed. Newell G. Bringhurst and John C. Hamer (Independence, MO: John Whitmer Books, 2007), 46–77.