Why Did Jesus Say that Some Well-Intended People Will be Told to Depart? | Meridian Magazine 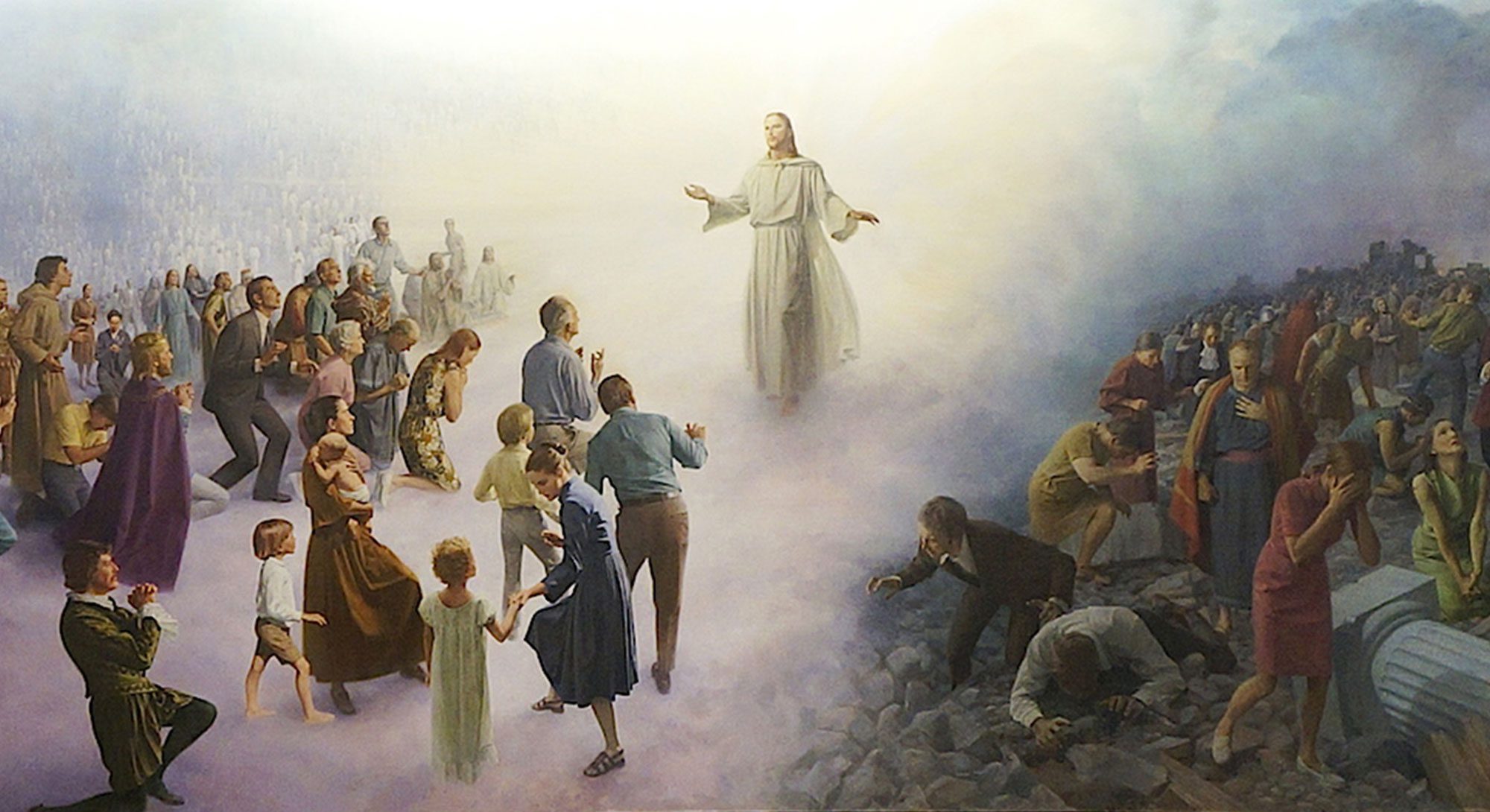 Why Did Jesus Say that Some Well-Intended People Will be Told to Depart?

Not every one that saith unto me, Lord, Lord, shall enter into the kingdom of heaven; but he that doeth the will of my Father who is in heaven.
3 Nephi 14:21

As Jesus Christ continued to present his “Sermon at the Temple,” a version of the Sermon on the Mount (Matthew 5–7) that He gave to the Book of Mormon peoples,[1] He declared that some people attempting to enter the kingdom of heaven would be told to “depart” (3 Nephi 14:23). They would not be allowed to enter, despite having come to the Lord after proclaiming to have done many things in His name. Although this approach may seem harsh to some, it makes more sense if one understands how Jesus was using covenant/temple language that His audience would have recognized and understood.

Not every one that saith unto me, Lord, Lord, shall enter into the kingdom of heaven; but he that doeth the will of my Father who is in heaven. Many will say to me in that day: Lord, Lord, have we not prophesied in thy name, and in thy name have cast out devils, and in thy name done many wonderful works? And then will I profess unto them: I never knew you; depart from me, ye that work iniquity. (3 Nephi 14:21–23; cf. Matthew 7:21–23)

This passage is, for many readers, difficult to comprehend, as the people who will be told to depart had apparently been doing good works in the name of the Lord, as would be characteristic of faithful believers. However, Jesus acted as if their use of His name had been used or taken in vain and suggested that they will not be able to enter because they “work iniquity” instead of doing His Father’s will. It is likely that Jesus was directing His comments specifically towards those who were associated with the temple but who had apostatized from correct practice because they had broken their covenants and/or were acting in God’s name illegitimately.

Other passages in the scriptures likewise command the wicked to depart. Not coincidentally, these scriptures are laced with covenantal and temple imagery. The last part of 3 Nephi 14:23/Matthew 7:23 echoes the words of Psalm 6:8: “Depart from me, all ye workers of iniquity.” Hosea 8:1-2 uses language similar to that of 3 Nephi 14/Matthew 7 and prophesies against those who “shall cry unto me, ‘My God, we know thee,’” referring to those who take part in “the house of the Lord,” but who have “transgressed my covenant, and trespassed against my law.”

There are several scriptural passages that declare the importance of knowing or being known by the Lord. While the word “know” may not seem particularly significant, it may often be related to covenantal language. In John 10:14, Jesus said that He is “the good shepherd” and that “[I] know my sheep, and am known of mine.”[2] BYU Professor John W. Welch has argued that the verb “know” may have a covenantal meaning here, as it does elsewhere in the scriptures. The Hebrew word for “to know” (yada‘), for example, appears in Amos 3:2: “You only have I known of all the families of the earth: therefore I will punish you for all your iniquities.”

Similarly, when God spoke of Abraham’s faithfulness in keeping the way of the Lord, He described His covenant relationship with Abraham by declaring “I know him” (Genesis 18:19). Welch explained that “the Sermon on the Mount, therefore, seeks to restore the old covenant between God and Israel, by which God knew (or recognized) Israel and the Israelites knew God (see Hosea 13:4; Jeremiah 24:7).”[3]

Some interesting parallel ideas that involve using the name of the Lord and entering the temple (and by association, the “kingdom of heaven”) can be found in Psalm 24. Psalm 24 is a “temple entry” psalm which presents a group of people who are seeking the face of the Lord (v. 6)[4] by passing through the gates (v. 7) of the temple to ascend “the hill of the Lord” (v. 3). When attempting to pass through the temple gates, they essentially used the name of “the Lord” as a password (v. 8), as David J. Larsen has very ably propounded.[5]

Psalm 24:3–4 records the question of the temple-goers, “Who shall ascend into the hill of the Lord?” The requirements are given: “He that hath clean hands and a pure heart [cf. 3 Nephi 12:8; Matthew 5:8], who hath not lifted up his soul unto vanity, nor sworn deceitfully.” Some scholars have suggested that the last clauses make reference to taking the Lord’s name in vain, meaning performing actions in the Lord’s name illegitimately.[6] Also, the reference to swearing likely signifies taking an oath in the Lord’s name. The verse indicates that doing so “deceitfully” will bar the petitioner from ascending to the temple and seeing the face of God.

Comparing Psalm 24 with 3 Nephi 14:21–23 (cf. Matthew 7:21–23) helps clarify that Jesus was using the language of the temple in these verses, as He did throughout the Sermon on the Mount (and, more particularly, the Sermon at the Temple).[7] When Jesus pronounced these sayings regarding those who would say “Lord, Lord” in the hope of entering through the gates of the Kingdom of God, He knew that his audience, being familiar with temple language and practices, would understand what He meant.

It appears that Jesus was, as was Hosea in Hosea 8:1–2, directing His comments towards those who officiated in the temple but who had fallen away from correct practice because they were acting in God’s name illegitimately, perhaps because they had broken their covenants. This is likely the context in which Jesus saw the Jewish leadership, and perhaps some among the Book of Mormon peoples as well. They claimed to act with the authority of God, but in actuality were using His name in vain. In order to enter His kingdom, the use of His name alone, without the required righteousness and faithful covenant relationship, will not gain them access.

These verses testify that the Lord knows those who follow Him in righteousness. They are recognized by Him. They follow His way and do His Father’s will and not their own. Those who use His name must depart from wickedness or, unfortunately, depart from Him. By choosing their own path, the wicked unavoidably depart from the Lord’s path.

When followers of Christ follow His covenantal path faithfully, as taught in the Sermon on the Mount and at the Temple, then they will come to know Jesus Christ (John 17:3) and will do the will of the Father; Christ will then covenantally know them and claim them as His own in His kingdom. Those who choose another path will have to depart, as they have already chosen a way is not the one that leads to eternal life.

When Jesus says that he does not “know” these people, the problem is not that he doesn’t know who they are or what they have done. Obviously, he knows them all too well. What is lacking is their being known to Him as sacred covenant makers, observers, and keepers.

David J. Larsen, “Ascending into the Hill of the Lord: What the Psalms Can Tell Us about the Rituals of the First Temple,” in Ancient Temple Worship: Proceedings of the Expound Symposium, 14 May 2011, eds. Matthew B. Brown, et al. (Salt Lake City and Provo, UT: Eborn Books and The Interpreter Foundation, 2014).

John W. Welch, The Sermon on the Mount in the Light of the Temple (London: Ashgate, 2009).

[2] Similarly, Psalm 1:6 informs that “the Lord knoweth the way of the righteous: but the way of the ungodly shall perish.” Paul, speaking of those Church members that were trying to stay faithful in the face of apostate teachings, told Timothy: “The Lord knoweth them that are his. And, Let every one that nameth the name of Christ depart from iniquity” (2 Timothy 2:19).

[4] Although the King James Version reads “that seek thy face, O Jacob,” based on the Hebrew of the Masoretic Text, many modern translations render it “who seek the face of the God of Jacob,” based on the evidence of alternate Hebrew manuscripts. See, for examples, the NIV, ESV, RSV, NRSV, and others.

[5] In verse 8, they apparently use the name “the Lord” twice when asked the question “Who is the King of glory?” This is similar to Jesus’ usage in Matthew 7/3 Nephi 14:21. See also the one who passes through the temple gates coming “in the name of the Lord” in Psalm 118:19–20, 26. For more on the “temple entry” sequence of Psalm 24, see David J. Larsen, “Ascending into the Hill of the Lord: What the Psalms Can Tell Us about the Rituals of the First Temple,” in Ancient Temple Worship: Proceedings of the Expound Symposium, 14 May 2011, eds. Matthew B. Brown, et al. (Salt Lake City and Provo, UT: Eborn Books and The Interpreter Foundation, 2014), 171–188.

[6] See, for example, Gary Holloway, James and Jude: The College Press NIV Commentary (Joplin, MO: College Press, 1996), 123. Also, the Jewish Publication Society’s translation of the Tanakh (Hebrew Bible) renders the last half of Psalm 24:4 as “Who hath not taken My name in vain, And hath not sworn deceitfully.” Note: Taking the Lord’s name in vain should probably be understood as performing actions or making covenants “in his name,” and doing so unworthily or illegitimately. See Taylor Halverson, “How else might the Lord’s name be taken in vain?” Deseret News, June 20, 2016, accessed online at deseretnews.com.