Why did Jesus Christ Compare Himself to a Hen? | Meridian Magazine 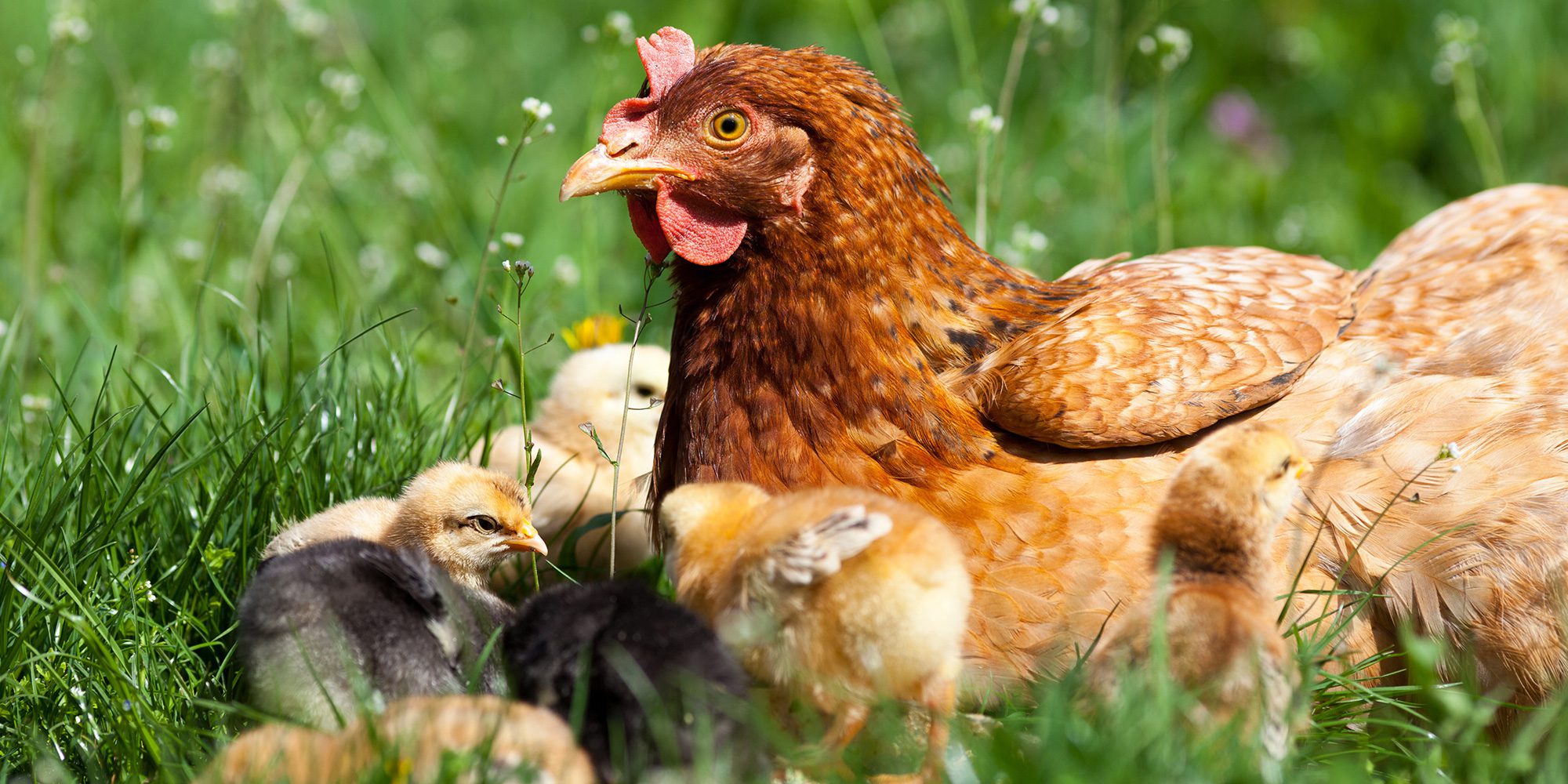 Why did Jesus Christ Compare Himself to a Hen?

How oft have I gathered you as a hen gathereth her chickens under her wings.

After the great calamities and destruction among the Nephites, they experienced “thick darkness upon all the face of the land” (3 Nephi 8:10),[1] and in response to these afflictions, “there was great mourning and howling and weeping among all the people” (v. 23). It is in this setting of anguish and suffering that the voice of Jesus Christ was “heard upon all the face of this land” (3 Nephi 9:1).

As part of His message of redemption, Jesus declared, “how oft have I gathered you as a hen gathereth her chickens under her wings” (3 Nephi 10:4). This metaphor was repeated four times in three successive verses, and was even used in three different tenses: “how oft have I gathered you and nourished you” (v. 4, speaking to those of the fallen cities), followed by “how oft would I have gathered you” (v. 5, speaking of those in Jerusalem), and concluded by “how oft will I gather you” (v. 6, speaking to the spared members of the House of Israel, emphasis added for all verses). Clearly, this repeated metaphor was of transcendent—even eternal—significance.[2]

Jane Allis-Pike explained, “For a metaphor to be meaningful, the reader must have a familiarity with the objects used for comparison.”[3] For people living in ancient America, chicken might have referred to an actual chicken,[4] or it could have been a loan-shift term for a fowl with similar features in the New World.[5] Turkeys, for example, were prevalent in ancient America,[6] took special care to protect their young,[7] and played a significant role in religious thought.[8]

Whatever species of fowl was represented here by the words hen and chickens,[9] audiences generally are familiar with the natural behavior of hens and their young. Allis-Pike explained that Jesus Christ can be represented by a mother bird in His role as “creator of this earth,” His “desire to protect his young” (those who become His children through covenant), His willingness to “[use] his body to shield his beloved ‘children’ from endless death and hell,” and His “proactive care in the nurture of his ‘children.’”[10]

Like the hen that hurries her chicks together, Christ focuses on “gather[ing]” his “children.” This gathering comes in the form of teaching them to follow him, to accept the gospel, to learn the plan of salvation, and receive the saving priesthood ordinances.[11]

The chicks that need to be gathered, on the other hand, meaningfully represent the House of Israel. “The Book of Mormon peoples are one branch of the house of Israel. They have a long-standing history and covenant relationship with the Savior and his gospel. They know the Savior as the chicks know their mother.”[12]

The underlying purpose of this metaphor was “to remind and teach the people of the true nature and conditions of their covenant relationship with [Jesus Christ].”[13] Not only does it convey the historical assurance of “Christ’s desire to protect his people,” but it also “underscores the fact that they must want his protection.”[14] This can be seen in Christ’s twice repeated statement “how oft would I have gathered you,” followed by the emphatic declaration: “yet ye would not” (3 Nephi 10:5).

Christ’s hen metaphor is explained further in Alma’s open invitation that “whosoever will come may come and partake of the waters of life freely; and whosoever will not come the same is not compelled to come” (Alma 42:27).[15] Like a mother hen, Jesus Christ is ever concerned for the physical and spiritual needs of His children. And because His infinite atonement stretches wide as eternity, He will always remain capable of providing shelter and protection to all who willingly come unto Him. He promises and affirms, “how oft will I gather you” (3 Nephi 10:6).

It should also be recognized that even though this metaphor pertains to God’s dealings with the House of Israel, His efforts here and now at gathering and including His children within His covenant are boundless. All who are willing to be “baptized in the name of the Lord, as a witness before him that ye have entered into a covenant with him” will be immediately enfolded and included in His loving arms (Mosiah 18:10). Brent L. Top invited,

May we exercise greater faith in the arms of the Lord—His arms of power, His arms of love, and His arms of mercy. May we allow Him to cradle and carry and comfort us in those arms. In turn, our arms—our determination and our devotion—will be strengthened. … May we all be “clasped in the arms of Jesus.”[16]

Jane Allis-Pike, “‘How Oft Would I Have Gathered You as a Hen Gathereth Her Chickens’: The Power of the Hen Metaphor in 3 Nephi 10: 4–7,” in Third Nephi: An Incomparable Scripture, ed. Andrew C. Skinner and Gaye Strathearn (Salt Lake City and Provo, UT: Deseret Book and Neal A. Maxwell Institute for Religious Scholarship, 2012), 57–74.

Clifford P. Jones, “The Great and Marvelous Change: An Alternate Interpretation,” Journal of the Book of Mormon and Other Restoration Scripture 19, no. 2 (2010): 50–63.

[3] Jane Allis-Pike, “‘How Oft Would I Have Gathered You as a Hen Gathereth Her Chickens’: The Power of the Hen Metaphor in 3 Nephi 10: 4–7,” in Third Nephi: An Incomparable Scripture, ed. Andrew C. Skinner and Gaye Strathearn (Salt Lake City and Provo, UT: Deseret Book and Neal A. Maxwell Institute for Religious Scholarship, 2012), 59.

[4] Brant A. Gardner, Second Witness: Analytical and Contextual Commentary on the Book of Mormon, 6 vols. (Salt Lake City, UT: Greg Kofford Books, 2007), 5:322: the “common assumption is that chickens were a post-conquest introduction into the Americas.” However, there is currently not a consensus concerning the timing and details of the chicken’s introduction to the Americas (see p. 322). See George F. Carter, “Pre-Columbian Chickens in America,” in Man Across the Sea: Problems of Pre-Columbian Contacts, ed. Carroll L. Riley, J. Charles Kelley, Campbell W. Pennington, and Robert L. Rands (Austin, TX: University of Texas Press, 1971), 178–218; George F. Carter, “Before Columbus,” in The Book of Mormon: The Keystone Scripture, ed. Paul R. Cheesman, S. Kent Brown, and Charles D. Tate Jr. (Provo, UT: Religious Studies Center, Brigham Young University, 1988), 172–176; Alice A. Storey, et al., “Radiocarbon and DNA Evidence for a Pre-Columbian Introduction of Polynesian Chickens to Chile,” PNAS 104, no. 25 (2007): 10335–10339. For further references, see Allis-Pike, “How Oft Would I Have Gathered You,” 60 n. 6.

[5] Allis-Pike, “How Oft Would I Have Gathered You,” 60: “many ground-feeding birds—quail, chickens, pheasants, turkeys—gather their offspring under their wings, and since the Book of Mormon is a translated work, the words hen and chicken may simply be the English signifiers of a bird that did exist among the Lehites. Regardless of the actual bird the New World survivors knew, we can assume they would have been familiar with a bird that gathered its offspring under its wings.” For a more thorough explanation of loan-shifting and translation, see Book of Mormon Central, “Why Are Horses Mentioned in the Book of Mormon? (Enos 1:21),” KnoWhy 75 (April 11, 2016). For a specific example of “turkey” as a loan-shifted term for “chicken,” see Allen J. Christenson, Popol Vuh: Sacred Book of the Quiché Maya People: Translation and Commentary (Norman, OK: University of Oklahoma Press, 2007), 87: “In modern Quiché usage, ak’ refers to chickens, which were introduced by the Spaniards soon after the Conquest. The Precolumbian ak’ was the domesticated turkey (Meleagris ocellata). Colonial period dictionaries often refer to the turkey as kitzih ak’ (true ak’) to distinguish it from the chicken introduced from Europe.”

[7] See “Wild Turkey Parenting,” eMammal, September 6, 2013, online at emammal.wordpress.com; Karen Davis, “A Mother Turkey and Her Young: ‘Their Kind and Careful Parent,’” Poultry Press 17, no. 3 (2007): 2: “During the first few weeks of life, young turkeys sleep on the ground under their mother’s wings. After a month or so, they leave the ground and fly at night to a large low branch, where they ‘place themselves under the deeply curved wings of their kind and careful parent, dividing themselves for that purpose into two nearly equal parties.’”

[9] The English word hen, like the Greek word ornis in Matthew 23:37, can be used to mean many kinds of female birds, including female turkeys, quail, or pheasants. While the word chickens here could well point to the young chicks of regular chickens, the Greek word used in Matthew 23:37 for chickens is nossia, which can mean the young offspring of birds generally. In Psalms 83:4 it refers to the chicks of a sparrow, and in Leviticus 12:8; 14:22; and Luke 2:24 it is used in the expression “two young doves.”

[15] Alma’s teaching is directly linked with the hen metaphor in Doctrine and Covenants 10:65–66: “For, behold, I will gather them as a hen gathereth her chickens under her wings, if they will not harden their hearts; Yea, if they will come, they may, and partake of the waters of life freely.”