Why Did God Support the Nephites in Battle? | Meridian Magazine 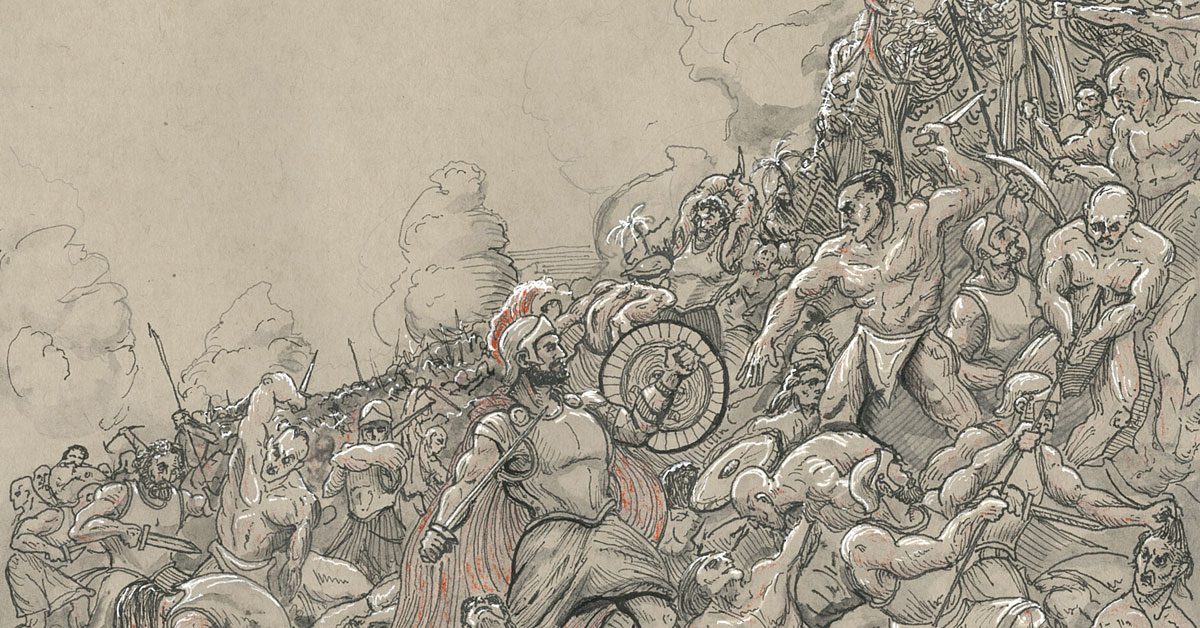 Why Did God Support the Nephites in Battle?

“But now, ye behold that the Lord is with us; and ye behold that he has delivered you into our hands. And now I would that ye should understand that this is done unto us because of our religion and our faith in Christ. And now ye see that ye cannot destroy this our faith. Now ye see that this is the true faith of God; yea, ye see that God will support, and keep, and preserve us, so long as we are faithful unto him, and unto our faith, and our religion; and never will the Lord suffer that we shall be destroyed except we should fall into transgression and deny our faith.” Alma 44:3–4

Modern warfare is a complex affair, often involving well-trained armies, powerful weapons, and intricate strategies. Victory is perceived as a result of military prowess—the armies with the most skilled soldiers, deadliest weapons, and greatest strategic brilliance are usually expected to succeed in the long run, although luck, geography, and determination also play their roles. Ancient warfare, even if it typically played out on a smaller scale, could be every bit as complex. However, in the ancient world, victory was never thought to be determined purely by the military might of great nations and empires. There was also thought to be a supernatural or divine element to war, and it was ultimately the gods who decided the fate of most military conflicts.

As Stephen D. Ricks explained, “every conflict in the ancient Near East was prosecuted under the direction of the gods or of God. Men began war at the command of, or with the approval of and aid of, the gods or of God … and the victors ended the conflict with thanksgiving and offerings to deity.”1 Ricks illustrates this point by appealing to Akkadian, Egyptian, and Syrian examples.2 This worldview was naturally shared by Israel and reflected in the Old Testament, where the Lord is described as a warrior (Exodus 15:3; Isaiah 42:13). The Israelites consulted the Lord on matters of war (see Judges 20:23, 28; 1 Samuel 14:37), and when His commands were followed, the Lord aided the Israelites in battle (see Joshua 10:11; 24:12; 1 Samuel 17:45).3

Such a mindset was not confined to the Old World. As John L. Sorenson has pointed out, “Religion, or cult, was integral to the conduct of war in Mesoamerican culture. Religion affected every aspect of warfare.”4 According to Lynn Foster, “The Maya fought their wars under the protection of the gods. … The gods were present everywhere in the Maya world and especially on the battlefield.”5 Other scholars explained that war “was a holy obligation, tied to the beings who created the world.” Victory “demonstrated to all that the gods were on their side.”6

The Maya had ways of consulting the gods about military affairs. For example, Sorenson noted that in Guatamala, native high priests would use “sorcery and enchantment” to ascertain if an enemy army was approaching, and where they should lead their troops.7 Among the Kaqchikel Maya in highland Guatemala, specialist diviners would be sent to consult a “divining stone” on military affairs. “Campaigns reportedly were begun or delayed depending on the stone’s appearance or figure.”8 In addition, “the strategies for battle were formulated by officers … who were imbued with the magical spirit of the gods.”9 The Kaqchikels referred to this as “divining power, transformative power,” and believed all the great warriors in their traditions possessed this power.10

“The Book of Mormon,” observed Ricks, precisely “reflects a sacral ideology of war similar to that found both in Israel and in the ancient Near East.”11 For example, when Moroni’s armies had surrounded Zarahemnah and the Lamanites, Moroni declared “now, ye behold that the Lord is with us; and ye behold that he has delivered you into our hands” (Alma 44:3). Moroni was confident that “God will support, and keep, and preserve us, so long as we are faithful unto him” (Alma 44:4). “The sacred was an essential element of warfare in the Book of Mormon, as it was in ancient Israel and in the ancient Near East.”12

As noted above, the divine or supernatural was likewise an integral part of ancient Mesoamerican warfare, and the Book of Mormon also shares an affinity to practices found among the Maya. For example, the Nephite captains Zoram and Moroni both consulted Alma the High Priest on military affairs because he was known to possess the “spirit of prophecy” (Alma 16:5–6; 43:23–24). Alma would “inquire of the Lord” and receive revelation on where to direct Nephite armies (16:6; 43:24). Alma may have utilized the Nephite interpreters—two stones touched by the hand of God—in this process, much like the Kaqchikel diviners’ use of a “divining stone.”13 A few generations later, it had become custom to directly appoint those with the “spirit of revelation and also prophecy” as the chief captains over their armies (3 Nephi 3:19), similar to the practice among the Maya, noted above, to have military officers with a divine spirit or power from the gods.

However, in both the Book of Mormon and the ancient worlds (Old and New), divine involvement was not confined to successful military campaigns. Failure was typically indicative of divine displeasure. “Just as the Nephites inquired of the Lord before entering battle, [and] expected his aid … the Lord’s departure from the midst of their armies portended disaster.”14 This is most evident in the gruesome scenes of the Nephites’ final battles, where Mormon provides an eye-witness description of their abhorrent sins and their failure to turn to God and repent. As a result, the Lord withdrew His support, and the Nephite armies were overrun, eventually leading to the demise of their people (Mormon 2–6).

“Without faith, all of [the Nephites’] boasts were vain: God offers no promise of victory to armies that neither heed his word nor keep his commandments …. The final battle at Cumorah simply validates the principle given already to the ancient Israelites: through war, and by the wicked, God will punish his people.”15 Ricks noted that the annihilation of Ammonihah, which took place centuries earlier, can teach a similar lesson: “The implication of the story seems clear: while those who persecute the righteous (as the Ammonihahites had) will suffer, those who seek the counsel of prophets will be blessed and protected.”16

Although it is rarely considered or acknowledged in today’s secular society, God’s divine hand is just as involved in world affairs and unfortunate conflicts now as it was anciently. The Book of Mormon’s accounts of warfare thus offer a very sobering and relevant lesson: a society that has rejected the Lord and lives wickedly cannot expect to benefit from divine protection.

Of course, the first priority for citizens throughout the world should be to avoid violence and conflict whenever possible. But when all other options fail and military conflict seems unavoidable, individuals and nations can receive further protection by living righteously.17 Invoking God’s divine protection—which He desires to give to all people everywhere—is surely the best type of defense in these latter days, when the prophesied “wars [and] rumors of wars” are unfolding before our very eyes (Mormon 8:30; cf. Matthew 24:6). Then, when all earnestly seek to align their wills to the will of God, the ultimate blessing of the Prince of Peace will protect and prosper everyone everywhere.

8.Judith M. Maxwell and Robert M. Hill II, trans., Kaqchikel Chronicles: The Definitive Edition (Austin, TX: University of Texas Press, 2006), 21. “The Wars of the Sotz’il and Tuquche’,” a sixteenth century document most likely based on “traditional, precontact historical writings” (p. 17) mentions two rulers with “divining power” and one who was “a great diviner,” both of whom “counseled war because they knew how to destroy ravines” (p. 689).

13.Matthew Roper, “Revelation and the Urim and Thummim,” in Pressing Forward with the Book of Mormon: The FARMS Updates of the 1990s, ed. John W. Welch and Melvin J. Thorne (Salt Lake City and Provo, UT: Deseret Book and FARMS, 1999), 281 notes that in the Hebrew Bible, the phrase inquire of the Lord is frequently used to indicate the use of Urim and Thummim, and may thus refer to the use of the interpreters in these passages.

17.“War,” Gospel Topics, at churchofjesuschrist.org, provides a useful summary of the Church of Jesus Christ of Latter-day Saints position on war in modern times.