Why Did Abinadi Talk about the Suffering Messiah? | Meridian Magazine 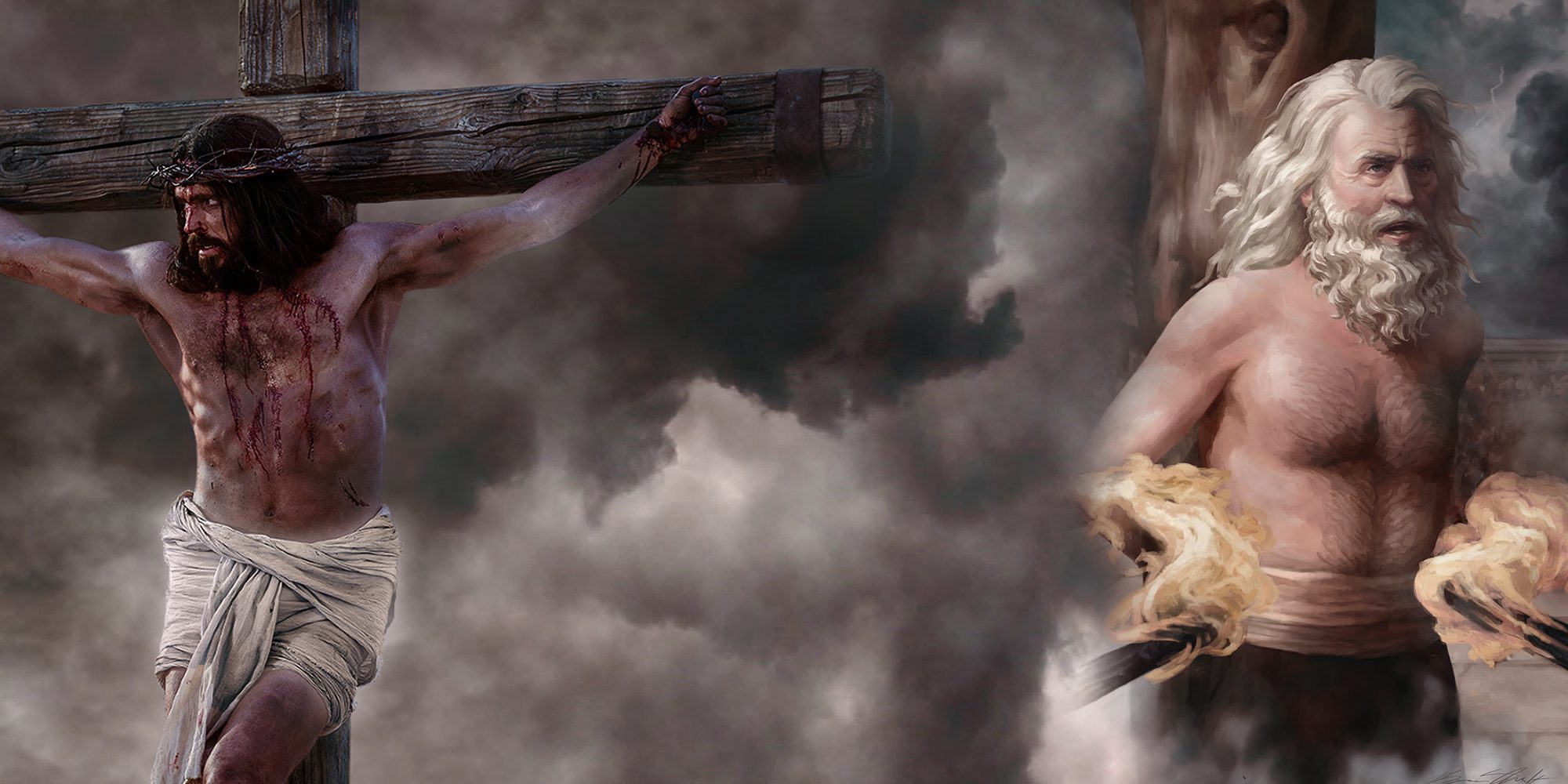 Why Did Abinadi Talk about the Suffering Messiah?

“Surely he has borne our griefs, and carried our sorrows; yet we did esteem him stricken, smitten of God, and afflicted” (Mosiah 14:4; Isaiah 53:4).

Isaiah 53, known as the “Song of the Suffering Servant,” has powerfully inspired Christians and Jews alike, and is a subject of intense investigation by academics.[1] When Abinadi stood before the court of Noah, accused of false prophecy, he turned to this commanding and enduring text for his defense. He then built on Isaiah’s messianic words, testifying that “God himself shall come down … [and] suffereth himself to be mocked, and scourged, and cast out, and disowned by his people” (Mosiah 15:5).

While all of this was part of Abinadi’s legal argument, Isaiah 53 and Abinadi’s subsequent testimony of Christ is more than just a legal brief.[2] Because of Abinadi’s immediate surroundings and circumstances, the idea of a suffering Messiah likely resonated with him.

Among scholars, there is no consensus on the origins of Isaiah 53.[3] Interpretations range from the Suffering Servant being a royal figure,[4] to being inspired by the “intercession and suffering of certain prophetic figures.”[5]

The tale of Abinadi brings to life the prophetic figure as a Suffering Servant. He suffered the ultimate fate at the hands of the very people he had come to serve. His narrative mirrors Isaiah 53 in a number of ways.

It seems likely that Abinadi would have personally identified with Isaiah’s portrayal of the Suffering Servant. The Servant was “despised and rejected of men; a man of sorrows, and acquainted with grief” (Mosiah 14:3; Isaiah 53:3). As one Isaiah scholar put it, “the Servant [had] to take the lowest place, to brave the scorn, and even worse, the dismissal of the very ones he came to serve.”[6] Similarly, Abinadi was sent twice to call Noah and his people to repentance, for which he was scorned, rejected, accused, imprisoned, condemned, scourged, and executed by them (Mosiah 11:26–29; 13:9, 17, 19; 17:5–20).

Abinadi had reason to take special note of this Servant bearing the griefs, carrying the burdens and sorrows of his people, being taken from prison and being brought as a lamb to the slaughter (Mosiah 14:4, 7–8; Isaiah 53:4, 7–8). He could also have been struck by the extent to which the people of Noah, like sheep who had “gone astray,” everyone having turned to their own iniquitous way (Mosiah 14:6; Isaiah 53:6).

King Noah and his priests provided an interesting contrast to the Suffering Servant. The Servant was “esteemed … not” (Mosiah 14:3; Isaiah 53:3), meaning “the Servant has none of the outward accouterments of power, position, and success.”[7] On the other hand, Noah enjoyed riches and power, having many wives and concubines,[8] “many elegant and spacious buildings … ornamented … with fine work” and “a spacious palace, and a throne” and his priests had “seats which were set apart … above all the other seats … ornamented with pure gold” (Mosiah 11:3–14).

While Noah “did walk after the desires of his own heart,” the Servant or the Son of God was “subjected the flesh to the will of the Father” (Mosiah 15:2; 11:2). Noah “did cause his people to commit sin, and do that which was abominable in the sight of the Lord” (Mosiah 11:2), but the Servant “was wounded for … transgressions” of others, made “an offering for sin” and “bore the sins of many, and made intercession for the transgressors,” thereby making them clean (Mosiah 14:5, 10, 12; Isaiah 53:5, 10, 12).

Recent scholarship suggests that prophetic suffering, typically at the hands of those whom they are called to serve, gave birth to Isaiah 53. In this light, it is noteworthy that this particular prophecy plays a central role in the story of Abinadi, the only narrative in the Book of Mormon about a prophet suffering the ultimate price—death—dealt by those whom he sought to aid.

Many today continue to find insight and reassurance in Isaiah’s powerful, poetic words about the Suffering Servant. It is likely that Abinadi not only used it as a legal defense but also as a personal refuge and comfort. Like many prophets before and after him, he was consoled by the knowledge that though he suffered rejection and persecution, the Savior—the true Suffering Servant—would descend below all things (Doctrine and Covenants 122:8), that “he has borne our griefs, and carried our sorrows … and with his stripes we are healed” (Mosiah 14:5; Isaiah 53:5).

This also likely sent a powerful message to Noah and his wicked priests: while they mistakenly thought they were the Lord’s messengers by misapplying Isaiah 52:7–10,[9] the contrast between them and the Servant in Isaiah 53 underscores how far they were from true servants of the Lord.

Although Abinadi may have thought his preaching was fruitless, at least one of Noah’s priests was touched (Mosiah 17:2–4). When Alma the Elder set up his fledgling community, he based his teachings on the words of Abinadi and Isaiah. Alma put his people expressly under covenant “to bear one another’s burdens” as the Servant would bear, and to “mourn with those that mourn” or grieve, and “stand in need of comfort,” and to “serve [the Lord] and keep his commandments” and “come into the fold of God, and to be called his people,” not walking “every one to his own way” (Mosiah 18:9, 10; 14:6; Isaiah 53:6).

[3] For summaries of the different interpretations on who the “servant” is, see R. E. Clements, “Isaiah 53 and the Restoration of Israel,” in Jesus and the Suffering Servant, 42–54; Walter C. Kaiser Jr., “The Identity and Mission of the ‘Servant of the Lord’,” in The Gospel According to Isaiah 53, 92–94.

[4] For instance, one suggestion is that Hezekiah’s suffering nigh to death before the Lord miraculously healed him and spared the city from the invading Assyrians served as the inspiration for Isaiah (2 Kings 20:1–7, ca. 701 BC). See Margaret Barker, “Hezekiah’s Boil,” Journal for the Study of the Old Testament 26, no. 1 (2001): 31–42. This interpretation is intriguing since many scholars argue that Isaiah 40–55 were actually written by a later prophet, ca. 540 BC during the Babylonian exile, and thus too late to be accessible to Lehi before he left Jerusalem. Yet if Hezekiah is the messianic type which inspired the song, then Isaiah 53 would be from ca. 700 BC, from the original Isaiah, and thus available on the plates of brass. For further discussion on this issue in connection with the Book of Mormon, see John W. Welch, “Authorship of the Book of Isaiah in Light of the Book of Mormon,” in Isaiah in the Book of Mormon, ed. Donald W. Parry and John W. Welch (Provo, UT: FARMS, 1998), 423–437; Kent P. Jackson, “Isaiah in the Book of Mormon,” in A Reason for Faith: Navigating LDS Doctrine and Church History, ed. Laura Harris Hales (Salt Lake City and Provo, UT: Deseret Book and Religious Studies Center, Brigham Young University, 2016), 69–78. For a recent Evangelical approach to the issue of Isaiah unity and authorship, see Richard L. Schultz, “Isaiah, Isaiahs, and Current Scholarship,” in Do Historical Matters Matter to Faith? A Critical Appraisal of Modern and Postmodern Approaches to Scripture, ed. James K. Hoffmeier and Dennis R. Magary (Wheaton, IL: Crossway, 2012), 243–261.

[5] See Hermann Spieckermann, “The Conception and Prehistory of the Idea of Vicarious Suffering in the Old Testament,” in The Suffering Servant, 1–15, quote on p. 8.

Who did the paintings at the head of the article. They should be given credit.