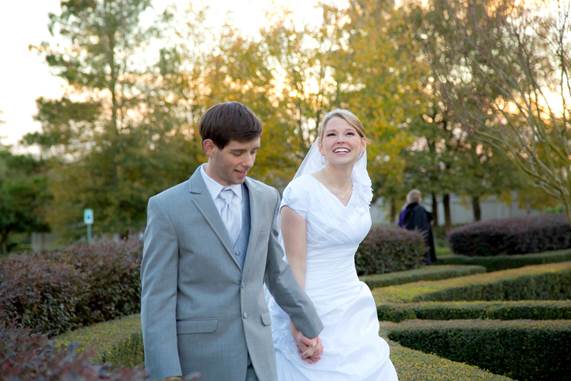 When tragedy strikes twice: A lesson in faith and courage‏

Cover Image: Sjon and Hanna at the Houston Temple.

In July of 2012, members of the Casey Johnson family, all LDS from Sugar Land, Texas (near Houston) were traveling westbound in the outside lane of I-10 shortly after lunch. Their 2004 Ford Expedition veered to the inside lane to avoid a piece of tire tread in the roadway. The driver overcorrected to the right, putting the SUV into a skid. The vehicle partly overturned and crashed into a concrete pillar, according to the Texas Department of Public Safety. Tristen Johnson, 14, and her sister Madeliene Johnson, 12, were both killed in the crash. Three others in the car were injured: the mother and driver Pearlette Johnson, 44,  Sjon Johnson, 21, and Maegan Johnson, 19, who sustained traumatic and possibly permanent brain injuries.

Not long after the funeral for his two sisters, Sjon Johnson, a returned missionary,  proposed to his childhood girlfriend Hannah Smith.  They had grown up in the same ward together and had written letters to each other weekly during Sjon’s mission to Virginia.  Hannah and Sjon were sealed together for eternity on Dec. 20, 2012,  in the Houston, Texas, temple.  The two had been best friends in the same Texas ward since they were 9 years old.  They then moved to Idaho to start their married life together in Rexburg as BYU students. Their marriage brought much joy to their families, and helped soften the sadness over the loss of his two sisters.

Then tragedy struck the Johnson family again, this time near Rexburg.  Sjon Johnson,  just 24, drowned in Idaho on the Snake River, as the victim of a canoe accident on May 25, 2015. His wife Hannah and 9 year old cousin Olivia, who were also in the same canoe, survived the tragic accident.

Sjon was hailed by family members as a hero for his actions to save a 9-year-old Olivia from drowning before he reportedly became entangled in a log jam and was pulled under the water by the swift current.

About 15 minutes into the canoe float, the family hit a rough patch of water.  Sjon’s canoe hit a partially submerged log which capsized their canoe. Hannah floated down the river where she was able to get to shore.  The 9-year-old later told family members that Johnson helped her escape the debris and then she washed down the river and was picked up by family members.  Johnson’s uncle, Joel Galbraith, an online instruction director at BYU-Idaho, was in another canoe on the family outing when Sjon’s canoe rolled over.

“My sweet nephew passed away yesterday amidst silent heroics on our canoeing outing. He helped free his little cousin, Olivia, and gave his own life in the process,” Galbraith wrote on Facebook.  Casey Johnson, Sjon’s father, explained that his son Sjon managed to rescue Olivia from also becoming entrapped in the logs. “Sjon, having a selfless love for his cousin, Olivia, saving her life today despite losing his,” he wrote.

Monday’s drowning came less than three years after Sjon survived the car wreck that claimed the lives of his two sisters near Houston.  At the funeral services for Sjon held in Rexburg last week, family members described how Sjon had heroically tended to the survivors of the tragic car accident in Texas.  He had called for help, assisted the first responders and tended to his injured mother and sister.  Hanna also spoke about how grateful she was for the plan of salvation and for the sealing power found only in temples.

Casey Johnson (Sjon’s father), facing the burial of a third child, bravely posted the following comments on his FaceBook page just several hours after receiving word about his son’s drowing.   This father’s faith and strength in the face of this second tragedy, gives courage and hope to us all:

To all our family, friends, associates and more… It comes with great sorrow, sadness, pain, longing, and most of all – love, that I express, with my wife, about the passing of Sjon. He is my hero, as are the rest of our children. The fact that both Tristen and Madeliene were taken early, we found out that in their journals they were more spiritually advanced than either Pearlette and I could even dream. Maegen with her courage and perseverance, despite her traumatic brain injury from the same accident claiming her two younger sisters. Sjon, having a selfless love for his cousin, Olivia, saving her life today despite losing his. Krystle and Ian pushing along and living life to its fullest, helping their disabled sister and offering support to their parents. Hannah, to have loved Sjon and us as her other set of parents. What more could a mother or father ask for of their children? I am forever grateful that Heavenly Father has allowed Pearlette and I to have such wonderful children. They have all blessed our lives.

While Sjon will be missed, we are of a faith that respects the fact that we will be with him, and our daughters, again as an eternal family. For those not of our faith, we believe in the sealing of families. That is what is done in the Mormon temples. We are sealed as a family for the eternities, and that sealing is predicated upon our faithfulness in living up to our covenants that are made between you and God. A sacred covenant that you will live the life as an upstanding Christian to your spouse, children, and those that you come in contact with, regardless of other beliefs. To us, it is the eternal family that truly makes a difference.  As for us, we will grieve, we will shed tears, and our hearts will be filled with longing; however, this is but for a moment as God will reach out to us and will lift us up with His loving and caring arms. I know this because He has done it before.

I am deeply grateful for all those that have reached out to us personally, physically, on the phone, via Facebook, and other means of communication. Thank you for being there and willing to assist us during this challenging time. We will continue to keep everyone informed of any memorial arrangements once it has been decided. It will be then that we will be reaching out to many of you for assistance. Thank you again.

To the Johnson family: What an inspiration each of you is to us--and to the world! Thank you for sharing your tender feelings and your testimony that you know you will be together one day soon forever! We send our love and prayers and condolences to you.

I am honored and humbled by the comments and greatly appreciate the support. The important thing to take note is that families are eternal - according to Heavenly Father, but how do we view our families instead and then act accordingly with each member of our family. Thank you for all the support.