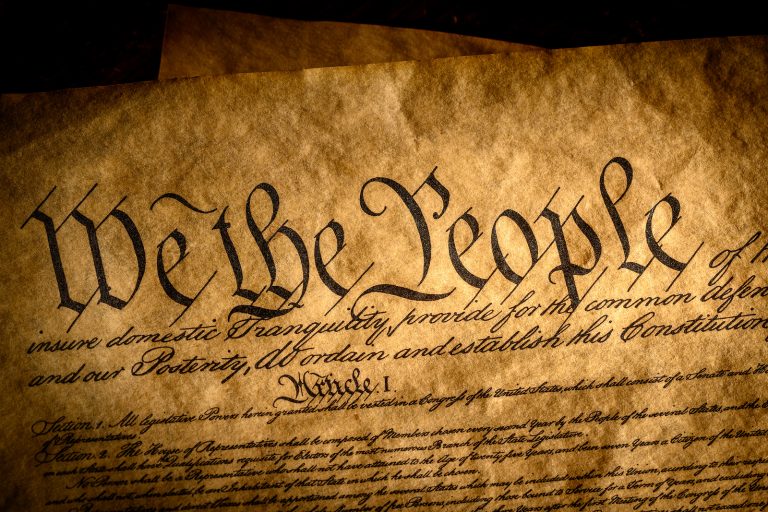 When This Nation Will Be on the Very Verge of Crumbling…

“Even this nation will be on the verge of crumbling to pieces and tumbling to the ground and when the Constitution is on the brink of ruin this people will be the staff upon which the nation shall lean and they shall bear the Constitution away from the very verge of destruction.”

A building stands because of its foundation of rock, cement and rebar, and its girders of steel.  What are the comparable components of a solid foundation and girders in the United States, the distortion or lack of which would cause a crumbling?

Skim down the following list and check current efforts to diminish or destroy them.

Belief in God – fosters responsibility knowing we will one day be accountable for our actions and lays a tempering effect on the citizenry to behave.  And without such, lesser beings vie to fill the role.  ##   Belief in God has dropped from 97% in 1965 to 80% in 2020.  The downward trend is more pronounced among the young and the social science and philosophy professors who teach them.

Sovereign People – people sovereign over government rather than the reverse was truly revolutionary.  A government “of the people, by the people, and for the people,” as Abraham Lincoln described it, is critical to our success.   ##   When occupants of the White House of either party wield pens to issue executive orders linked by thin threads to generalized legislation, one begins to wonder.

Written Constitution – as the first written constitution in the history of the world, it contains permanent principles to guide the nation.  It was not merely inspired by God, but established by Him “for the rights and protection of all flesh” through the hands of wise men raised up to that very purpose in preparation for the Restoration.  Find in any population of 3.5 million people today the talent equivalent of Washington, Jefferson, Adams, Franklin, Madison, Hamilton, et al.  Random probability it was not.   ##   Satan’s minions heap scorn on it as an evil roadblock against progress.  Thus arose the idea of a “living” Constitution whose underlying principles can and should be changed to accommodate the latest social engineering theories and schemes – a vehicle for change rather than a means of constraint.

As society grows and improves, people must adjust the application of the Constitution, but that does not mean changing the principles embodied in it.  Human nature is remarkably consistent over time – there are no new emotions – regardless of whether one lives in an agricultural, industrial, or post-industrial technology age.  The principles in the Constitution, especially how power should be handled, are similarly ageless.

Balance of Power – the power to govern must be controlled by separating power between branches of government, dividing power between the federal government and the states, and enumerating the powers specifically given to the federal government.  In short, minimal centralization so problems are best solved at the level closest to them.   ##   What has happened instead is the Deep State – the power to legislate has come to rest among 2.1 million civilian federal employees who produce and enforce a Federal Registry of 70,000 pages of rules.

Agency to Act – protect the right of people to run their own lives consistent with respect for others to do the same.   ##   Too many, however, arrogantly consider themselves better than their fellow citizens and take it upon themselves to tell others what they must and must not do, thus hindering agency.

Bill of Rights –  of the 20 or so freedoms identified in the first ten amendments to the Constitution, freedom of religion and freedom of speech are most critical to the survival and vibrancy of the nation.   ##   Religious freedom is under attack as some claim it’s a hide-behind for abusive patriarchy, racism and homophobic bigotry.  It ties with freedom of speech as anti-religionists seek to banish from the public square opinions based on religious values.

But instead of writing rules to force Catholic nuns to buy contraception coverage or bakers to decorate gay wedding cakes or to punish people who kneel during the national anthem, why not let the free market decide whether they should be rewarded, punished, or ignored?

We note also the drive for more censorship of the Internet.  Some have called for a reality agency to flag disinformation and root it out.  Would such a Truth Czar be impervious to political pressures?  Would freedom of speech survive?  The right of free speech does not obligate others to listen, but don’t put it past certain types to try to mandate it.

Rule of Law – the foundation of this nation hinges on the rule of law over the whims of kings and tyrants who have traditionally ruled.  And the laws that form the rule of law must be created by those duly elected by the people.   ##   Unfortunately, today the vast majority of rules and regulations we must obey at risk of fines and penalties are being written by unelected lawmakers who have extended their power beyond a reasonable “filling in of details” from the original legislation.

Property Protection – the right to the fruits of one’s labor.  Laws must be equally applied through due process regardless of one’s station in life.   ##   With hazy justification, civil-forfeiture laws, designed to deprive drug lords of their plunder, allow government to seize and keep property merely on the suspicion of wrongdoing without ever bringing charges, let alone proving them in a court of law.

Stable Currency – when government income and spending are balanced, people can rely on the dollar as a store of value as well as a medium of exchange.  The free market functions best and citizens’ needs are met.   ##   Our national debt has now surpassed our total annual economic output.  Our debt is approaching $30 trillion and that doesn’t count unfunded liabilities estimated to be nearly $100 trillion.  The chances of ever paying off the debt are miniscule.  The currently chic Modern Monetary Theory that tells us not to worry is devoid of understanding human behavior.

Unchanging Morality – the recognition of absolutes in life – right and wrong, good and evil.  Morality is not to be determined by circumstances of the moment.   ##   Situational ethics and moral relativism have been with us for some time, but sillier definitions are in the offing.  An Oregon Department of Education-endorsed toolkit for middle school teachers claims white supremacy culture allegedly infiltrates math classrooms.  They say the focus on getting the right answer perpetuates fear as well as open conflict.  They suggest teachers come up with at least two answers that might solve each math problem.

No right answers to mathematical problems?  The definitions of right and wrong, good and evil, are stood on their heads.  Well did Isaiah prophesy.

True History – to know and teach how the nation came to be, events as they truly happened, so we appreciate our heritage and recognize the efforts of those who came before us.  ##   The tendency in today’s public education curricula is to overlook, if not outright distort, the role of the Founders.  Because some were indeed slave owners and because of the “Three-Fifths Clause” (a necessary Step 1 compromise to persuade southern states to join the Union; elimination of slavery would be Step 2 by Lincoln), the ascending Cancel Culture feels justified by racism reasoning to eliminate all of the works of the Founding Fathers, their tremendous strides toward freedom for all notwithstanding.

Civil Discourse – language should be clear, dignified and unambiguous.  The public square should be open to all points of view and let people decide to whom they wish to listen.   ##   Many are the efforts to blur meaning and minimize the severity of sin – steal becomes lift, murder becomes zap, adultery becomes playing around.  Or complete reversals – hack, bad, wicked, dope, sick and kill now have positive definitions in some circles.  Or fluidize – social justice, diversity, inclusiveness – to mean whatever is conveniently needed at the moment.

Working past language distortions, civil discourse requires a willingness to respect and debate differing viewpoints.  And to compromise as necessary for the good of society.  Such compromising previously resulted in bell-shaped curves with the majority of Americans either center-left or center-right.  Not so much today.  We see polarization and U-shaped curves with more and more people choosing oppositional positions as compromise is seen as weakness.

Academia and social media have become especially guilty of banning certain points of view from public debate to “protect” listeners/readers from what they deem politically incorrect.  For too many, it’s not enough to allow people to choose not to listen or read; they want to prevent them from having that choice.  Thus are differences of opinion turned into causes for hostile disagreement.

Shared Values – honesty, work ethic, responsibility, kindness, a trust in one another, and, though cultures may differ, all working together to achieve the common goals of freedom and prosperity for all.   ##   Sadly, national unity today is too often defined as “national agreement with me” and unified purpose is defined as ideological conformity.

A closing thought:  Among today’s leaders and those in recent years, which ones, if any, have been proper examples of dignity, honesty and kindness?

Violating two or three of the above foundation features would, of course, damage the nation, but what happens if all of them are attacked at once?  Might this be happening today?  To swipe a phrase traditionally applied to cookies … that’s the way the nation crumbles.

So what do we do about it?

Gary Lawrence is a public opinion pollster and the author of “The Magnificent Gift of Agency; To Act and Not Be Acted Upon” available at Deseret Book

We the people of the United States need to stop blaming everything on our government and step up and take responsibility for our own freedom. May I propose the way to do this is to "clean up our own back yards." When was the last time you read the United States Constitution, and do you know what it actually says and means? Freedom is only as free as we make it. We the people make America great!

The Freedom of Speech is just that...Free and Protected, and also freedom from the consequences of that speech, with a few exceptions. The 'woke' community wants consequences, censorship and the complete and total loss of livelihoods as punishment for any (to them) disagreeable speech, and they are getting away with this nonsense by using non-government entities to do it! I really hope that the courts will see this and extend the unconstitutionality of censorship to any organization that allows speech, especially social media and allows for people to sue for a clear violation of their Civil Rights. I also hope that the bills, that are being proposed around the country, that puts being fired from a job for disagreeable speech, up there with all other forms of discrimination are passed and become enforceable law. However, I really hope the Second Coming of the Savior will happen soon and that He can put a definitive stop to it for good.

Why Excommunication is Not “Spiritual Violence”

BYU Women’s Conference: What to expect and how to watch

Motherhood, What God gave you time for: A Homeschool perspective

By William C. Duncan
PAST ISSUES