When the Honeymoon Phase Is Not So Sweet | Meridian Magazine 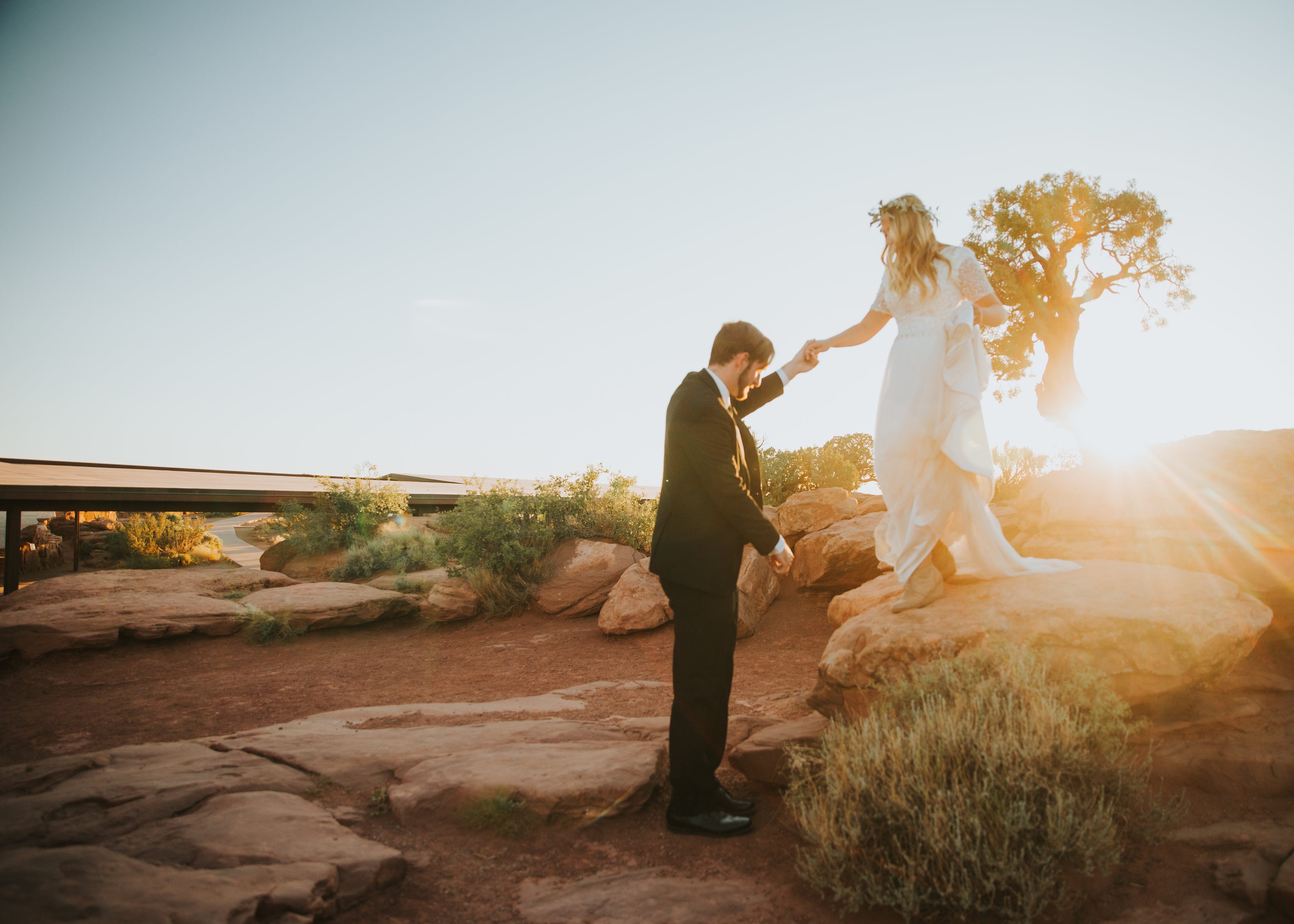 When the Honeymoon Phase Is Not So Sweet

Author’s Note: I’ve been wanting to write this story for a while, but it’s a sensitive one. When I came to my friend, Camille Hanna, to propose the idea of telling her story, one of my first questions was whether she wanted to remain anonymous. As she thought it over, she remembered all the times she desperately searched for any articles online describing people who could relate to her trials, and every single one was anonymous. This made her feel alone, and she doesn’t want others to feel that way. So, she bravely puts her name on this story in hopes that others will not have to feel the same shame she did.

With the traditional parties leading up to her wedding, Camille Hanna was not only being showered with kitchenware and home décor, but she was bombarded with advice about her wedding night and ideas of how it would and should be. At her bachelorette party, we all sat in a circle and giggled at each new piece of lingerie that slipped out of every pink bag. She was the first of us roommates to get married, and she was entering a world of intimacy that we knew quite a lot about in the scientific sense but was a total mystery to us in actual practice.

Between her first time to the OBGYN and her bachelorette party, she confided to my roommates and me that she was a little scared sex was going to hurt. We reassured her with our complete lack of experience in intimacy and all our scientific knowledge that she would figure it out just fine.

The wedding day came and we were all so thrilled for her as we watched her marry the love of her life in the Payson Temple. Every detail of the wedding seemed flawless, and all of us friends danced the night away at her reception, silently wondering what the rest of the night would hold for Camille. As Camille and her husband Jared ran to their getaway car through the lineup of friends and family cheering them on and waving glow sticks, we couldn’t wait for her to start this perfect honeymoon phase we had talked about for months.

But her report to us a few days later was devastating. Not only had there been pain on her wedding night, but the pain was so excruciating that she had cried. Every attempt at intimacy during their weekend away had ended in tears.

Not only did Camille feel like a failure, but she was wracked with so much shame. “The culture [is that] you get married young and everyone basically knows you are both virgins, so when you leave your wedding everyone knows you are about to lose your virginity. That added so much pressure, because then the next couple of weeks after we got married, people—who I felt like I didn’t even know well enough to be asking these questions—were constantly asking how our first night was,” Camille said.

The irony in this was that while mere acquaintances probed her about her wedding night, expecting the happy details of something so private and sacred, she also grew more and more ashamed to talk openly about the realities of her pain—what she quickly realized was a pain not caused by apprehension but from a real medical condition. Though people surveyed her seeking an unabashed account of the joy she discovered on her wedding night, they never stopped to question whether her experience was anything but positive.

When Camille finally got the courage to seek medical help, more than one doctor was less than helpful. Assuming her to be prudish and inexperienced, they hardly took her discomfort seriously, passing it off for the regular transition involved in becoming sexually active.

But with each doctor’s analysis, she began to dislike herself more and more. “I have felt so ashamed and so embarrassed by this,” Camille said. “If you get the flu or if you get cancer, I don’t think you feel ashamed, yet, because it was something with intimacy, it came with so much shame. Sex is so prevalent in the world and in the media, and I felt like if I can’t have sex, I’m broken.”

It wasn’t until she met with one OB/GYN that really listened that she discovered the root of the problem—vulvodynia, a chronic condition that causes unexplained and often unbearable pain during sex. With that knowledge, they began to try different procedures and remedies to improve the situation, including creams, cauterization, a partial simple vulvectomy and dilators. What made it all so difficult was that while she was facing pain, bleeding, multiple ineffective procedures and months of discomfort even sitting in a chair, she felt like she had to suffer in silence.

For the first 16 months of Camille and Jared’s marriage they couldn’t have sex. In that time, they took an official honeymoon to Peru and traveled to Virginia, Texas, New York, Mexico and Puerto Rico. From their blissful photos on Instagram, they looked like they were having the time of their lives, but every new hotel room and romantic view brought a twinge of sorrow and shame that physical intimacy was not an aspect of their adventures.

“There were so many nights that I thought, ‘There is no way that if I were a daughter of God I could be feeling this pain and this loneliness and this brokenness,’” Camille said.

While sexuality has become less of a taboo to discuss, those facing problems with physical intimacy often still feel this loneliness because there’s a sense of shame in finding difficulties where others, including those portrayed in the media, find delight. People may feel freer to discuss and give advice and giggle at bachelorette parties, but that same liberty to share the wonderful aspects of intimacy puts those struggling with it in a position that makes it hard to admit that it’s not all mood lighting and rose petals.

Though her medical procedures have improved their intimate life, she feels like after almost two years of marriage the shame has evolved. Instead of people asking about her intimate life, they are now questioning when she and Jared will have children soon.

“When [people] say things like, ‘Oh, I’m sure [a baby is] coming soon because you’ve been married for a year and a half!’ I would think in my head, ‘Well, that would be a really, really cruel joke on top of a really, really cruel joke because here I am completely unable to have sex and you’re telling me God is about to tell me to try and have a baby at the same time?’”

Through her journey with intimacy issues, Camille has observed that in our culture we have set these expectations, and subconsciously when we see people not fitting that mold or that expectation, we just ask. She doesn’t blame anyone for their questions—she herself is guilty of asking them on multiple occasions—but she’s realized that everyone is on their own journey and it’s not our place to ask.

“I’ve come to understand the individuality of one’s life,” Camille said. “Everyone is so different. Some of my closest friends had no idea what was going on in my life, but yet I go to BYU and I feel exactly the same [as everyone else]. I can’t tell you the amount of days that I’m like, ‘I’m just like everyone else here—I’m married, I served a mission, I have dyed blonde hair. I am a clone…’ We are different in our trials, but we are also different in our strengths and in our life missions and passions and what God has sent us here to do.”

From the outside, even people closest to Camille couldn’t see all that she and Jared were facing as newlyweds. While she was healing from her physical malady, she also had to (and still has to) find healing from the shame she felt through the process, the degree of which was magnified by the questions of others.

In a recent Instagram post, President M. Russell Ballard implored sisters and all saints to be less judgmental of others’ decisions. “Each of you must come to know what the Lord wants for you individually, given the choices before you. Once you know the Lord’s will, you can then move forward in faith to fulfill your individual purpose. One sister may be inspired to continue her education and attend medical school. For another sister, inspiration may lead her to forego a scholarship to a prestigious institution and instead begin a family much earlier than has become common in this generation.”

“Is it possible for two similarly faithful women to receive such different responses to the same basic questions? Absolutely! What’s right for one woman may not be right for another. That’s why it is so important that we should not question each other’s choices or the inspiration behind them. And we should refrain from asking hurtful and unsupportive questions like ‘Why are you going on a mission?’ or ‘Why aren’t you on a mission?’ or ‘Why aren’t you married?’ or ‘Why don’t you have children?’ We can all be kinder and more thoughtful of the situations in which our sisters throughout the world find themselves as they seek to follow the will of our Heavenly Father in their individual lives.”

Lupine, thank you so much for your comments. I needed to hear it. I've gotten to the point of wanting to be active in church, but dreading attendance. I've experienced an outbreak of "awful comments" from LDS ladies in the past few years. It has been shocking! Not over a specific "lack" or event, just ME, who I am, how I talk. (??) I'm unsure. For example, one woman said, "When I saw you here, I thought 'I dont know how much (my name) I could take'!" I really want to go back to church and try again, especially since I moved and am in a new stake. I have a hard time staying past Sacrament. I prayed about it all and found this in 2 Peter 2:12 "...(they) speak evil of the things they understand not..." And your comments, Lupine, made me think I'm not alone. Thank you.

Good grief! After 49 years in the church, I thought I’d heard every spiteful, nosy question/comment/piece of gossip that it was possible for many of our women (and men) to put out there. I say this having been through the whole kit ‘n caboodle of cultural insensitivity toward situations like childlessness, an inactive and mentally ill husband, widowhood, and then, being called a cougar on the prowl for daring to speak to younger, single guys. But these questions reported here hit the bottom level of cruelty. I respect Camille and Jared for allowing their names to be included in such a sensitive topic, yet fear they’ve opened themselves up to an even greater risk of mental peeping Tom behavior by so-called friends, total strangers, and of course, relatives. Personally, I would not and have not reported such detail on any topic for a published article, but to each his/her own . As I heard a brother in our ward comment a couple of weeks ago, “There’s a highway to hell but only a staircase to heaven. That tells you a lot about the volume of traffic that’s expected both directions.” In the church, we can likely replace “hell” with the Telestial Kingdom. There’s sometimes a cure for ignorance. They call it education. But there never has been and never will be a cure for stupidity. Please, brothers and sisters, put your brain in gear before engaging your mouth.