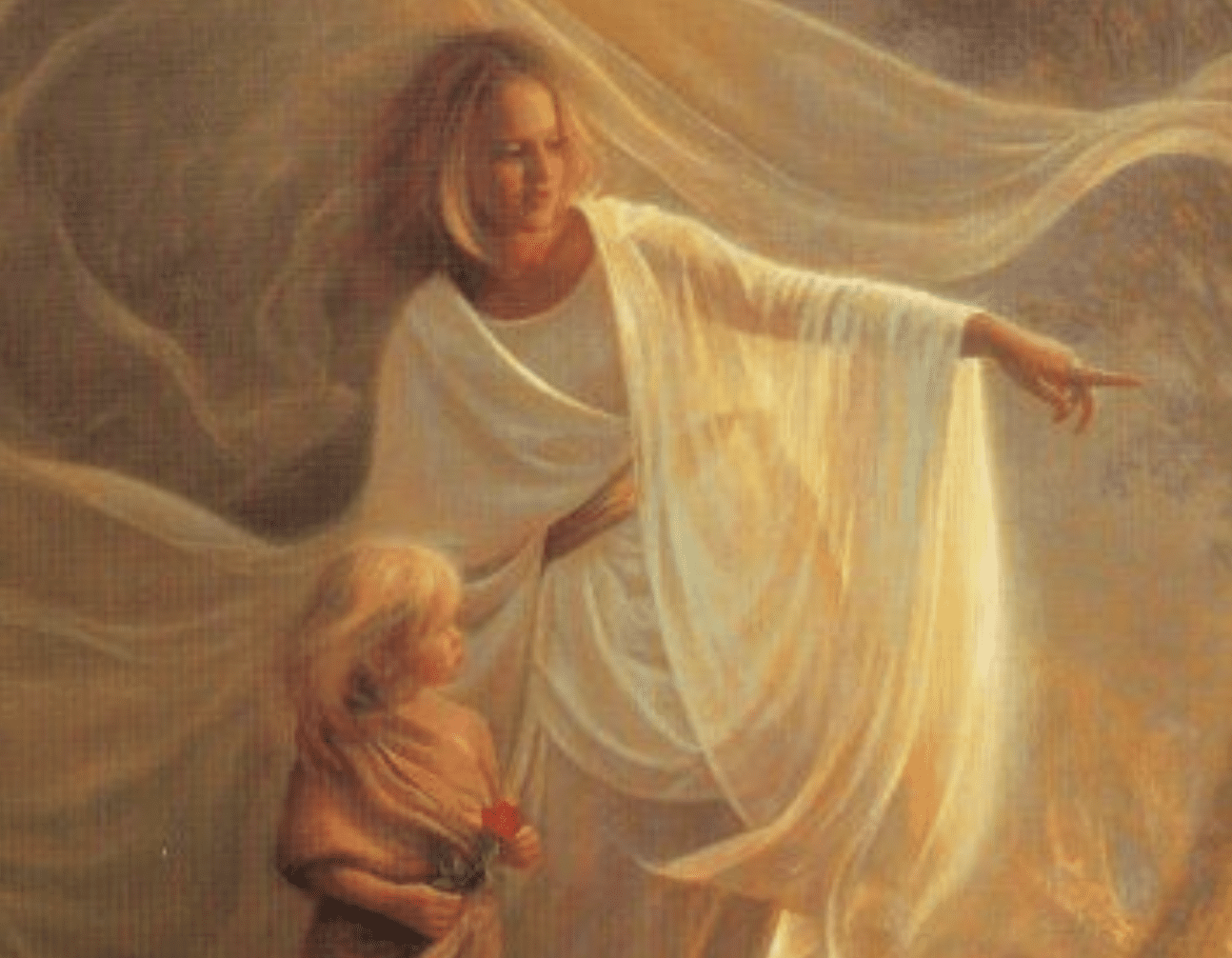 When Angels Intervene in Physical Ways

According to the many experiences of angelic visits I have recorded, there seems to be an unnamed protocol that angels adhere to when interacting with mortals. Depending on the specific directions they receive, they will protect or not protect us; heal or not heal us; save or not save us.  However, when given permission, they are apparently afforded some leeway in how they can help us. In this article, I want to share four remarkable incidents where angels were allowed to intercede in very physical ways.

Sometimes quick intervention is required by angels to keep us from harm. In these circumstances, they can tangibly touch us to get the point across as in the following experience with my good friend Rex Lowe from South Africa.

At that time in his life, Rex was in the middle of a tremendous trial.  He was desperately unhappy and began to feel like he would never be happy again.  One night of many he was driving aimlessly around the streets of Cape Town, his mind focused on his miserable circumstance and depressing thoughts of the past.  He stopped the car in an isolated place, got out, and walked over to a ledge overlooking the ocean. He recounts:

“Without thinking where I was wandering, I suddenly found myself at a favorite    look out point, where I had been many times previously.  It was on the edge of a 1000-foot vertical cliff, which dropped down to the ocean, banging waves onto the rocks below.

“I went and stood holding on to the safety rail, looking out to sea.  It was a dark     night with the wind and drizzle making it quite inviting to my equally dark   thoughts.  My mind was in a turmoil, I had made a complete mess of my life. I began to think that the only way out was to end it all.

“‘End it all’ became the driving thought in my mind. Without even thinking about the consequences, I instantly grabbed on to the safety rail, swinging my right leg and foot over it…and at that instant, an arm was very strongly placed around my shoulder and neck from someone standing behind me, pulling me firmly back to safety.  I turned my head to see who it was.  There was no one. By now I  was firmly being marched to my car on the opposite side of the road. The door was opened, and I was unceremoniously shoved in and the door was closed.”

By the time he was back in his car the influence of negative thought was broken and he “came to himself.”

Angels are allowed to use a variety of methods to help us, but the angel stratagem for Rex was to “strongarm” him off the ledge and into his car.

“…the Father of us all is watching and assisting.  And always there are those angels who come and go all around us, seen and unseen, known and unknown, mortal and immortal.” (Jeffrey R. Holland, “The Ministry of Angels,” Oct. Conference 2008)

Generally speaking, it must be joyful for angels as they get their assignment to rush in and save us.  They are creating in us a deep memory that will always inspire and encourage us.

My in-laws, Vera and Gerald Pratt have had many narrow misses with death.  As a family we always say that it’s the “Pratt Angels” that protect them over and over in the “pickles” that they get in.

Several years ago, my father-in-law Gerald Pratt, in his early 90’s, was driving a truck with his wife Vera on a dirt road in Mexico. He was going at a fast clip and didn’t realize that a narrow bridge was coming up fast which required him to rapidly slow down and move to the center of the road to safely cross. The two-car road width suddenly became a one-car width, and by the time Gerald realized this, he didn’t have time to swerve or push on his brakes.

At this moment, time practically stood still, and Vera saw that the front tire on her side of the car was not going to fit on the bridge, and in dread she thought,

She closed her eyes and braced for the inevitable.

At that exact second, instead of pressing on the brakes, Gerald felt his foot press down hard on the gas pedal instead.  The truck shot up into the air, cleared the ravine and landed on the other side, unscathed.  They stared at each other in a silence of understanding.  They were both convinced that the “Pratt” Angels had saved them yet again!

At times, angels are allowed to manipulate physical things such as brakes or steering wheels in order to protect us, but sometimes they can do even more, as in this next story.

Angel Drove a Car to Safety

Delores Pack, from El Paso, Texas recounts a time when an angel drove her while she slept.  She relayed to me the following amazing experience:

“When I was 19, I was on call at the hospital where I worked for the weekend shift.  There had been a steady stream of people coming through x-ray from Friday evening until about midnight on Sunday.  I was completely exhausted! There was finally a break in patients, and I went home. Within thirty minutes, however, I was called to come back into the hospital.  I got in my car thinking,

“I remember getting on the freeway, but then I lost all consciousness. 15 minutes later, as the car was turning into the hospital parking lot, someone shook me awake and said, ‘You are here now.  Wake up!’

“I awoke and drove into the parking lot and got out of my car. I realized that someone had driven me to the hospital.  Someone that knew and loved me had been there to help.”

Sometimes angels save us from pain or hardship, as in Delores’ case, but other times they permit us to go through the hardship or illness before they’re allowed to help us.  Their exertion or restraint on our behalf is always heavenly calculated for our best good, whatever that is.

Håkan Palm, a man from Sweden, shared an extraordinary experience with me where angels helped to heal his injuries after he endured a very bad accident in November of 2018.

Notice how tangible and physical the angels were with him. He writes:

“I was riding my racing bike on a narrow road in the Canary Islands. I sped on my racing bike in the last bend on the road towards Arguineguin. As I approached the bend a car rapidly came in front of me and passed.

“After a short time, the car suddenly decelerated, and I was forced to brake my bike hard to avoid a collision with the car. My rear wheel turned up in the air and I was thrown over the bicycle handlebar.  From a height of about 5 feet, I saw the inevitable coming.  I met the asphalt headfirst!

“The pan part of the helmet struck the street first, and then my nose hit the asphalt. My neck whiplashed at a horrible angle, and I knew it was bad.  The weight of my body pressed to my head, and I became motionless lying on my back. The driver of the car did not even notice what happened and continued his journey.

“Right after it happened, I opened my eyes and I saw three men in white shirts crouching over me on the street. As I lay, I could only see them from the stomach and up. I thought they were three men on their way home from work at a nearby business who stopped to help me.

“The three men tenderly took the back of my head in their hands and gently rocked it up and down about an inch. I felt their fingers on my head. One of the three expressed something in a language that I didn’t understand.  When the man stopped talking, they carefully placed my head back on the street.  One of them looked me in the eyes and twice said in a language I then understood:

“I saw their faces and for me the men seemed to be around 35-40 years old, dark- haired, well-mannered, very present and healthy.

“The men conveyed to me that they had called an ambulance. When they got up, I could now see them from knee height and upward.  They were completely dressed in white. As the ambulance arrived, the three men disappeared.

“I was transported to a hospital within a few minutes. In the hospital, the doctor found no damage to vertebrae or other skeletal parts. There were some abrasions, but nurses patched them.

“To get a second assessment of the neck, I flew to Sweden and had another doctor examine the head, neck, back and shoulders. Even he noted, after careful examination (including X-ray images) that he did not find any injury.

“For me, the event and the process were so natural. I thought they were three local Spanish men on their way home from work who stopped on the road to help me.

“I could have been killed by the accident, but I am convinced that the three men were angels, who in a heavenly language gave me a healing blessing, called an ambulance and then departed.”

If we could only see the heavenly hosts around us, we would be amazed at what they do for us. They have a protocol for each of us, but whatever angels do or don’t do is calculated under heavenly law for our greatest growth.

We are each a child of the Most High God and the strategy for each of us is magnificent!  Oh! If we could only see…

Just this past winter, I was cleaning the snow from the bed of my pickup truck so I could help a family member move. I stepped back onto the open tailgate, slipped and fell horizontally to the street. I lay in the street for a few moments to assess the damage to my body and, to my surprise, was completely unhurt. Being in my early sixties, I was astounded that I didn't hit my head, wrench my back, separate a shoulder, twist a knee or receive any injury except a slight abrasion on my elbow. I immediately said a prayer of thanks and wondered which of my departed family members caught me that morning.

My husband accidentally took a sleeping pill in the morning with his other morning meds, and therefore, fell asleep on his drive to work. He went off the road and his tire marks showed that he missed the edge by inches that would have rolled the car into the water. His car veered away from the edge, crashed through a gate and went perfectly down a dirt road missing trees on either side. He came to a stop and woke up enough to call me. The next morning as he was waking up and thinking of the miracle that he wasn't hurt, he heard the voice of our son who had passed away a few months earlier, saying, "Dad, I was with you," and he knew who had taken control of the steering wheel.