The Earth as a Sea of Glass | Meridian Magazine 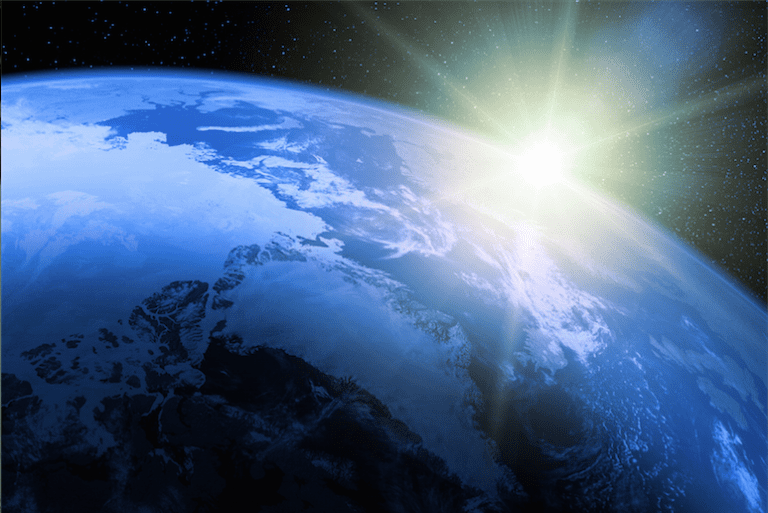 The Earth as a Sea of Glass

Joni Hilton’s wonderful article on the creation of the earth caused me to remember some studying I did on the future of this creation. I discovered some surprising insights into what this earth will be like when it achieves its final destiny.

A study of the prophets and the scriptures led me to some observations on the nature of eternal worlds, and what this earth will be like when it is renewed and receives its glorified and eternal properties. Scriptural and prophetic declarations describe our Celestial Kingdom as a place of everlasting burnings. Isaiah spoke of our eternal world as a place of devouring fire:

“The sinners in Zion are afraid; fearfulness hath surprised the hypocrites. Who among us shall dwell with the devouring fire? who among us shall dwell with everlasting burnings? He that walketh righteously, and speaketh uprightly; he that despiseth the gain of oppressions, that shaketh his hands from holding of bribes, that stoppeth his ears from hearing of blood, and shutteth his eyes from seeing evil” (Isaiah 33:14-15).

Those who will dwell in everlasting burnings are those who walk righteously and speak uprightly—those that despise the profit of oppression and illicitly obtained wealth; and those who refuse to be entertained by hearing and seeing blood and violence.

Notice how John described the earth in its sanctified state:

“And I saw as it were a sea of glass mingled with fire: and them that had gotten the victory over the beast, and over his image, and over his mark, and over the number of his name, stand on the sea of glass, having the harps of God” (Revelation 15:2).

In an earlier passage he described the celestialized earth as “a sea of glass like unto crystal” (Revelation 4:6).

And Joseph Smith observed that,

“The angels do not reside on a planet like this earth; But they reside in the presence of God, on a globe like a sea of glass and fire, where all things for their glory are manifest, past, present, and future, and are continually before the Lord” (Doctrine and Covenants 130:6-7).

He also said in response to the question, “What is the sea of glass spoken of by John, 4th chapter, and 6th verse of the Revelation?” that that sea of glass “is the earth, in its sanctified, immortal, and eternal state” (Doctrine and Covenants 77:1).

That sea of glass is, of course, a great Urim and Thummim. We are told that,

“This earth, in its sanctified and immortal state, will be made like unto crystal and will be a Urim and Thummim to the inhabitants who dwell thereon, whereby all things pertaining to an inferior kingdom, or all kingdoms of a lower order, will be manifest to those who dwell on it; and this earth will be Christ’s” (Doctrine and Covenants 130:8-9).

Hugh Nibley reflected on the kind of existence we should expect on a sea of glass—a world of crystal and fire—that is a Urim and Thummim:

“Mountains and hills, great rivers and small streams, surely impart variety and beauty to the scene… Some students have complained that having to live on a Urim and Thummim, a sea of glass, no less, must be infinitely boring. How wrong they are! The face of the Urim and Thummim is no featureless flatland; rather, as Abraham found out, it can give you more dimensions than you can even imagine.

“It is true, you have to exercise your mind in that environment, but where would you not wish to do that? If you want scented breezes over purple seas, the Urim and Thummim will gladly oblige; if it’s towering mountains you want, you can have them, too. Whatever it is you yearn to experience, that marvelous instrument can put you into the picture, if you only know how to operate it” (Approaching Zion, Chapter XIV).

Dr. Nibley suggested when he wrote this in Approaching Zion that such experiences were already available to some degree through the medium of television. Now most of us have an even more powerful example of what these verses promise. I have in my pocket a small black box that will, at my command, show me almost anything I want to see and tell me almost anything I want to know.

The process by which this earth might become such a place—a “sea of glass and crystal”—was suggested in a brief article in Empire Magazine forty-nine years ago.

“Nobody has ever produced anything else quite like glass. Mix lime, soda and sand, heat them, and you have a primitive form of it. The process is so simple, and the elements are so plentiful, that if the earth ever is consumed by fire it will end up as one huge ball of glass” (Empire, Nov 12, 1967; by the Denver Post, Inc.).

Many prophets have written of such a day, when Christ will come again and the earth will be consumed by fire.

Peter said “The elements shall melt with fervent heat, the earth also and the works that are therein shall be burned up” (2 Peter 3:10)

And Mormon wrote to Moroni of a day “when the Lord shall come, yea, even that great day when the earth shall be rolled together as a scroll, and the elements shall melt with fervent heat” (Mormon 9:2)

Nahum said that “The mountains quake at him, and the hills melt, and the earth is burned at his presence, yea, the world, and all that dwell therein” (Nahum 1:5).

Melvin J. Ballard a startling observation about what such a process could create. He said, “Our sun is a celestial world” (The Vision, N. B. Lundwall, 1946, p. 46).

Others have penned similar observations: Joseph Fielding Smith said, “It is my opinion that the greater stars we see, including our sun, are celestial worlds.” Doctrines of Salvation, Vol. 1, pp. 88,89)

Orson Pratt taught that, “This earth . . . shall be classed in its turn among the dazzling orbs of the blue vault of heaven, shining forth in all the splendor of celestial glory” (Millennial Star, Vol. 12, p. 72).

Charles W. Penrose gave a most moving description of our eternal world:

“The globe [on which the inhabitants of Earth] passed their probation, having kept the law the law of its being, will come in remembrance before its Maker. It will die like its products. But it will be quickened again and resurrected in the celestial glory . . . purified by fire from all the corruptions that once defiled it, developed in its perfections as one of the family of worlds fitted for the Creator’s presence, all its latent light awakened in scintillating action, it will move up into its place among the orbs governed by celestial time, and shining like a “sea of glass mingled with fire”, every tint and color of the heavenly bow radiating from its surface . . .” (Church History and Modern Revelation, Vol. I, p. 367).

I gave my wife a coat one Christmas to help her stay warm. I wrote this poem and gave it to her with the gift.

Most Christian folk are uniformed in what they say of dying:
“The just are air-conditioned while the wicked end up frying.”
The opposite is more correct, and it is just as well.
If it got hot in heaven we would want to go to (the Telestial kingdom).

I'm so flattered that my article triggered this one, Brother Gibbons! And no matter how it all happens in the end, it will be yet another testament to the majesty, glory, and organization of our Father in Heaven. What fascinating insights you've shared here!

President David O. McKay also stated in one of his books that our sun was a celestial world, but we are not able to see it because of the (flame) clouds that cover it.