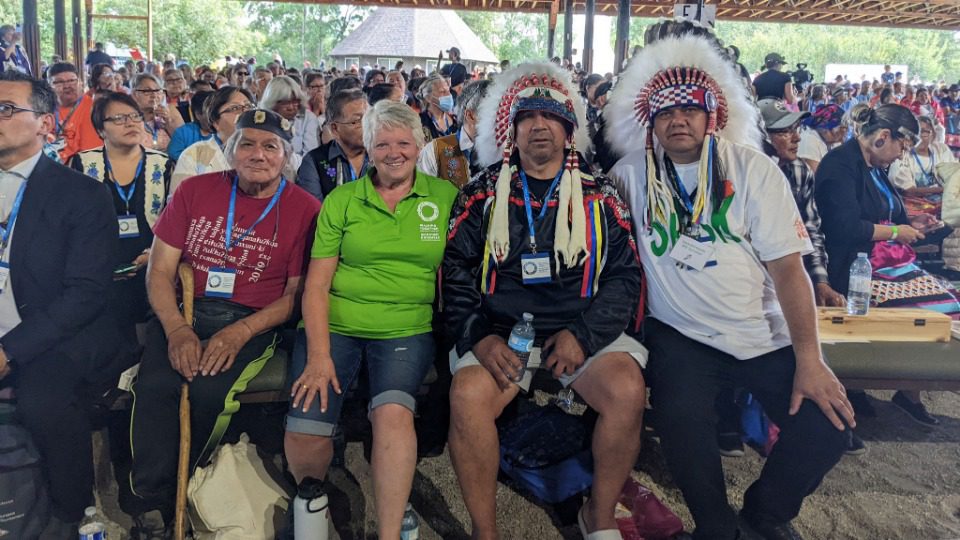 Canadian members of The Church of Jesus Christ of Latter-day Saints watched with interest as Pope Francis made a pastoral visit to Canada July 24–29, 2022. This historic visit was an important moment for the Pope to provide pastoral care to the Catholic community in Canada and “to listen and dialogue with Indigenous Peoples, … and to address the impact of colonization and the participation of the Catholic Church in the operation of residential schools throughout Canada” (“Healing and Restoration: An Historic Journey”).

Canada Newsroom invited several Latter-day Saints to reflect on the papal visit and to share what they have learned about “Walking Together,” the theme of the Pope’s visit.

Anne Wildcat, a Latter-day Saint and a member of the Ermineskin Cree Nation in Maskwacis, Alberta, was part of the planning committee for the papal visit to Maskwacis. Wildcat said, “It was a huge honour that Pope Francis chose my home First Nation to offer the apology on behalf of the Roman Catholic Church to Indian residential and Indian day school survivors. The Ermineskin Indian Residential School was one of the largest residential schools in Canada. My heart is full of gratitude and humility for the sacrifices of those I worked with in preparing for the papal visit in Maskwacis at the local, provincial and national level and with the Vatican.”

Wildcat further explained, “My hope is that mainstream educators in Canada and the United States become more aware of the histories of their local Indigenous nations, both the dark and beautiful aspects of the numerous Indigenous cultures. May we all embrace the spirit of reconciliation, … love and forgiveness.”

Eileen Bell, social media director for the Church’s Canada Communication Council, covered the event professionally as a long-standing radio journalist. She shared, “As a journalist for over 40 years, the opportunity to cover Pope Francis’ visit to Alberta was a bucket-list goal for me. I’ve admired his positions and gentleness since he became Pope and was looking forward to seeing him in person. The day he arrived in Canada, he appeared very fragile. After a more than 10-hour-long flight from Rome, the 85-year-old man had to be almost lifted from his wheelchair to another chair. I worried how the rigorous schedule of the next few days would affect him.”

Bell continued, “The next day, I was part of the media contingent in Maskwacis, where Pope Francis gave his apology for the Catholic Church’s role in Canada’s residential schools. He was able to stand and speak with a strong voice, and I remembered thinking how God was bearing him up to bring comfort to those who had come in search of healing. While not everyone who listened felt the Pope’s words addressed the issue completely, the ones who did feel comfort left with a start towards closure on that tragic part of their history. I could only think how the Lord [Jesus Christ] was helping [the Pope] bring that to them.”