What Is So Good about Nephi’s Name? | Meridian Magazine 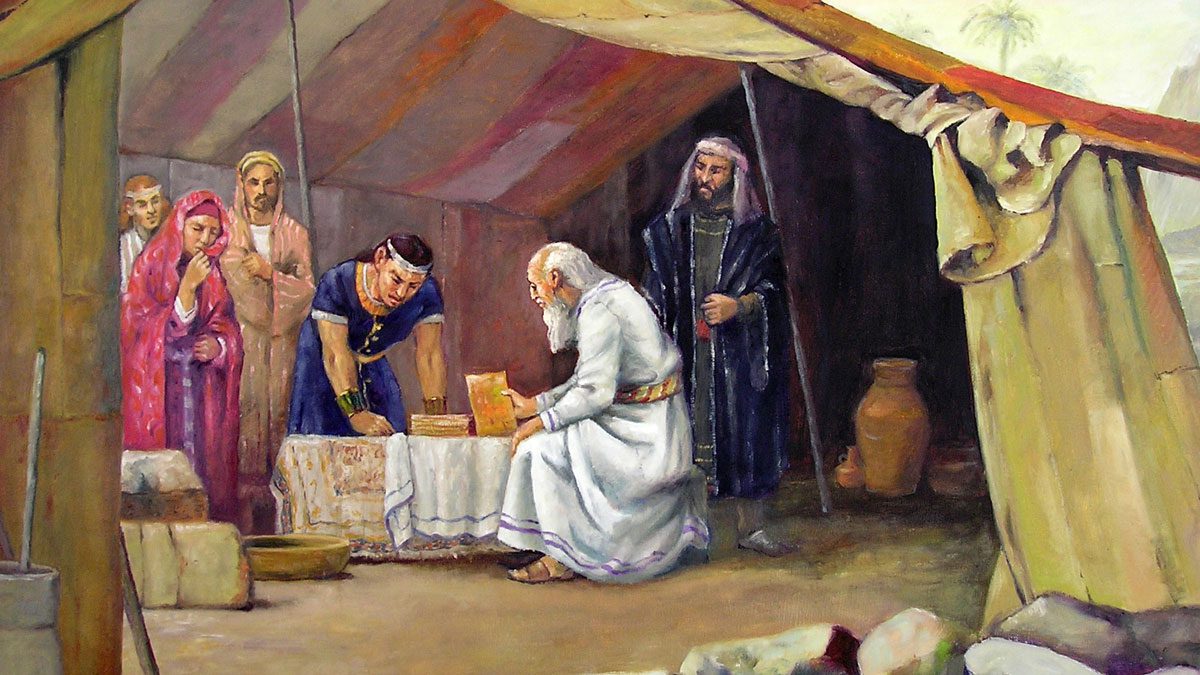 What Is So Good about Nephi’s Name?

“I, Nephi, having been born of goodly parents, therefore I was taught somewhat in all the learning of my father; and having seen many afflictions in the course of my days, nevertheless, having been highly favored of the Lord in all my days; yea, having had a great knowledge of the goodness and the mysteries of God, therefore I make a record of my proceedings in my days.”
1 Nephi 1:1

“I, Nephi, having been born of goodly parents …” (1 Nephi 1:1).[1] This opening line, so familiar to diligent students of the Book of Mormon, can probably be quoted word for word by many of its readers. What probably goes unrecognized, though, is that Nephi’s introduction includes a pun on his own name. Nephi is most likely derived from an Egyptian word (nfr) which means “good,” “goodly,” “fine,” or “fair” (meaning beautiful).[2] During Nephi and Lehi’s day, it was pronounced something like “neh–fee, nay–fee, or nou–fee.”[3]

Nephi’s statement that he was born of “goodly” parents isn’t the only use of good in his opening remarks. He also mentioned that he had “a great knowledge of the goodness and the mysteries of God” (1 Nephi 1:1). This seems to suggest that Nephi was crediting any of his own goodness, which was inherent in his name, to his earthly parents and Heavenly Father.

Nephi’s closing remarks, in 2 Nephi 33, mirror his introduction’s emphasis on goodness. He said his words “persuadeth [his people] to do good” (v. 4) and that “they teach all men that they should do good” (v. 10). These statements affirm that Nephi fulfilled the commandment given to him by the Lord in 2 Nephi 5:30: “and thou shalt engraven many things upon them which are good in my sight, for the profit of thy people.” Finally, Nephi warned that his words would condemn those who “will not partake of the goodness of God” (2 Nephi 33:14 which, of course, echoes his description of God’s “goodness” from 1 Nephi 1:1.[4]

The threefold repetition of good-related terms at the beginning and end of Nephi’s record provides evidence that a pun was indeed intended.[5] The case is strengthened even further by the fact that other Book of Mormon authors picked up on Nephi’s clever introduction and mimicked his use of wordplay in their own opening statements.

For instance, Enos introduced his short book by writing, “I, Enos, knowing my father that he was a just man—for he taught me in his language, and also in the nurture and admonition of the Lord—and blessed be the name of my God for it” (Enos 1:1). Like Nephi, Enos mentioned (1) the righteousness of his father, (2) that he was taught in the language of his father, and (3) praise for God. In Hebrew, the name Enos means “man.”[6] Therefore, by referring to his father as a “just man,” Enos connected his own name with his father’s righteousness, much like Nephi did. Similar examples of introductory wordplay can be found for the names Benjamin, Abish, Alma, and Zeniff.[7]

Another line of evidence comes from a statement made by Helaman, son of Helaman, to his sons, Nephi and Lehi. Helaman said that he gave them the names of their “first parents” so that

Therefore, my sons, I would that ye should do that which is good, that it may be said of you, and also written, even as it has been said and written of them.” (Helaman 5:6–7)

This comment is obviously valid for Father Lehi,[8] whom Nephi described as being “goodly” (1 Nephi 1:1). But it works especially well if the name Nephi is derived from a word that literally means “good.” By naming his children after his first parents, Helaman helped ensure that Nephi’s good name and good works were perpetuated by his descendants.[9]

In fact, it may be important to remember that the term Nephites comes from Nephi’s own name. Recalling that the Egyptian word (nfr) from which Nephi’s name is likely derived can also mean “fair,” it is notable that the Nephites are often referred to as a “fair” people. For example, when righteous Lamanites were converted unto the Lord, “their young men and their daughters became exceedingly fair, and they were numbered among the Nephites, and were called Nephites” (3 Nephi 2:16). Even more noteworthy is that Mormon referred to the Nephites as being “fair” four times in a row when he lamented their destruction:

Altogether, these textual clues persuasively demonstrate that Book of Mormon authors associated the name Nephi with that which is “good” and “fair.” Nephi’s statement that he was using the Egyptian language to write his record makes the possibility of an Egyptian wordplay especially inviting.[11]

It is widely accepted among biblical scholars that ancient Hebrew writers extensively used various forms of wordplay in their writings.[12] They cared about names and their meanings, and when the opportunity presented itself they creatively linked names with important narrative themes. In Nephi’s case, it seems he used his own name to emphasize the goodness of his father, the goodness of God, and the goodness of his record, which he described as containing the “words of Christ” (2 Nephi 33:10–11).

Most of all, Nephi hoped that his words would persuade his people and also all men to “do good,” just as Nephi himself had done (2 Nephi 33:4, 10). These themes help establish Nephi’s record—and by extension the entire Book of Mormon—as a good book, much like the Bible.[13]

The importance of names among Book of Mormon prophets can also help us recognize the significance of taking upon us the name of Christ. Helaman named his sons after Nephi and Lehi so that when they reflected upon their own names, they would have a desire to “do that which is good” (Helaman 5:7). Likewise, at baptism, we are commanded to take upon ourselves the name of Christ.[14] This can help us remember the things that Christ has done and then to do the works that Christ would do.[15]

Finally, it should be remembered that Joseph Smith didn’t study Hebrew until years after he translated the Book of Mormon.[16] And he never gained any formal training in the Egyptian language.[17] This being the case, it is highly unlikely that, relying on his own wisdom, he would have known about the widespread use of puns in the Bible. Nor would he have known that Nephi could be appropriately linked to an Egyptian word which means “good.” Nephi’s good introduction therefore provides good evidence that Joseph Smith was truly a prophet of God. It also helps affirm that Nephi was indeed an ancient Hebrew prophet trained in “the learning of the Jews and the language of the Egyptians” (1 Nephi 1:2).

[1] Throughout this article, italics will be added to scriptural quotes to emphasize instances of wordplay.

Nephi’s imagery seems to be drawing upon his father’s dream of the Tree of Life. In it, Lehi beckoned Laman and Lemuel to come unto the Tree of Life, but “they would not come unto me and partake of the fruit” (1 Nephi 8:18). The use of “would” in this sentence likely holds the archaic meaning of “want” or “desire.” If so, it would mean that Laman and Lemuel didn’t partake of the fruit because they didn’t desire to do so. This provides additional insight into Nephi’s statement concerning those who “will not partake of the goodness of God” (2 Nephi 33:14). No one is ultimately unable or prohibited from partaking of God’s goodness (see 2 Nephi 26:24–28), and so the only individuals who don’t eventually come unto Christ are those who refuse to do so. See Bowen, “Nephi’s Good Inclusio,” 186; Jennifer C. Lane, “The Presence of the Lord,” in The Things Which My Father Saw: Approaches to Lehi’s Dream and Nephi’s Vision (2011 Sperry Symposium), ed. Daniel L. Belnap, Gaye Strathearn, and Stanley A. Johnson (Salt Lake City and Provo, UT: Deseret Book and Religious Studies Center and Religious Studies Center, Brigham Young University, 2011), 130.

[5] The three-fold repetition in Nephi’s introduction includes Nephi’s own name.

[11] Although by Nephi’s day the Israelites had long ago escaped Egyptian bondage, the political, cultural, and linguistic connections between the two societies were never fully severed. Like Nephi, biblical authors sometimes utilized Egyptian words for puns and wordplay, even when they were writing in Hebrew. See Gary A. Rendsburg, “Word Play in Biblical Hebrew: An Eclectic Collection,” in Puns and Pundits: Word Play in the Hebrew Bible and Ancient Near Eastern Literature, ed. Scott B. Noegel (Bethesda, Maryland: CDL Press, 2000), 137–162.

[16] Joseph Smith translated the Book of Mormon in 1829 and there is no evidence that he was instructed in Hebrew until 1835. See Matthew J. Grey, “‘The Word of the Lord in the Original’: Joseph Smith’s Study of Hebrew in Kirtland,” in Approaching Antiquity: Joseph Smith and the Ancient World, ed. Lincoln H. Blumell, Matthew J. Grey, and Andrew H. Hedges (Salt Lake City and Provo, UT: Deseret Book and Religious Studies Center, Brigham Young University, 2015), 253–255; Louis Zucker, “Joseph Smith as a Student of Hebrew,” Dialogue: A Journal of Mormon Thought 3, no. 2 (1968): 41–55.

[17] For insights into what was known about ancient Egypt in Joseph Smith’s day, see John Gee, “Joseph Smith and Ancient Egypt,” in Approaching Antiquity, 427–448.

Isnt Nephi also a possibill variant of the Hebrew Nephilim, meaning giants? In which case it would be a prophetic name for this son of Lehi. one of great spiritual stature