What Does the Book of Mormon Say about the Armor of God? | Meridian Magazine 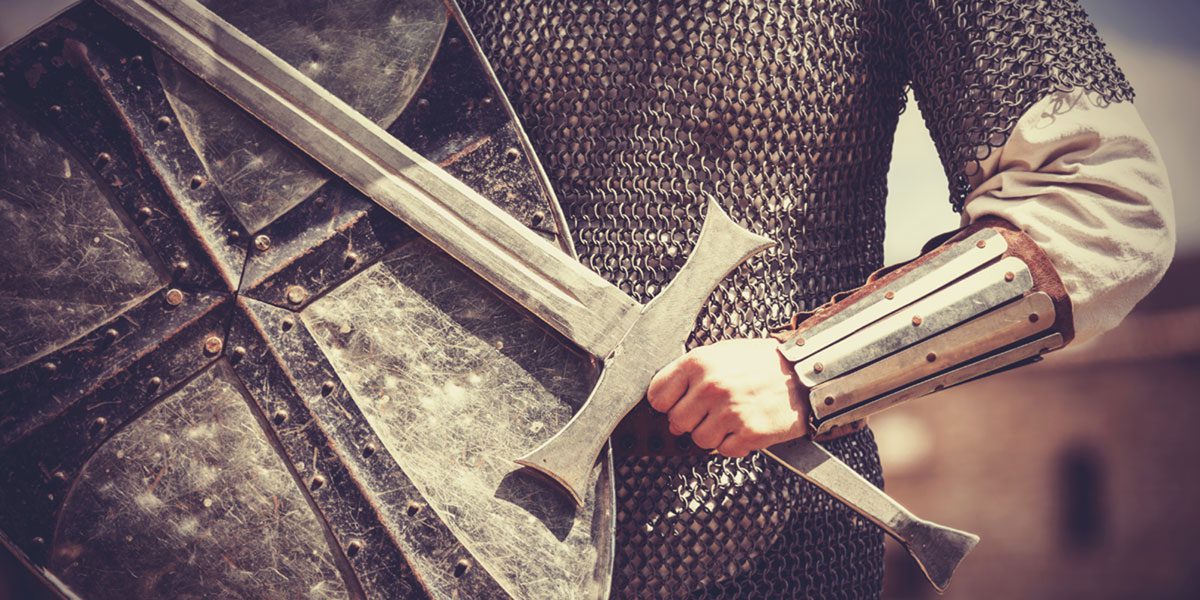 What Does the Book of Mormon Say about the Armor of God?

“Awake, my sons; put on the armor of righteousness.”

While preparing for a sacrament service sometime between August and September 1830,[1] Joseph Smith received the following revelation from the Lord: “Wherefore, lift up your hearts and rejoice, and gird up your loins, and take upon you my whole armor, that ye may be able to withstand the evil day, having done all, that ye may be able to stand” (Doctrine and Covenants 27:15). The Lord then presented a number of spiritual attributes and blessings associated with specific pieces of armor: (1) “loins girt about with truth,” (2) “breastplate of righteousness,” (3) “feet shod with the preparation of the gospel of peace,” (4) “shield of faith,” (5) “helmet of salvation,” and (6) “sword of my Spirit” (vv. 16–18).

Readers familiar with the New Testament might recognize right away that Doctrine and Covenants 27:15–18 is significantly referencing Ephesians 6:13–17. What some may not notice, however, is that the Book of Mormon also contains many scattered references to spiritual armor. While some of these may, at first glance, seem to refer simply to military descriptions of common ancient battle attire,[2] careful reading shows that, in a number of cases, Nephite writes acknowledged and intended a symbolic or spiritual interpretation. In some instances, the spiritual symbolism is even stated explicitly.

In his patriarchal blessings to his children, Lehi taught, “Awake, my sons; put on the armor of righteousness” (2 Nephi 1:23).[3] This verse indicates that, from the beginning, Nephite prophets recognized armor’s symbolic value for spiritual protection. It’s possible that Lehi was loosely quoting Isaiah 59:17, which is surely a source that Paul also drew upon when composing Ephesians 6:14, 17.

Loins girt about with truth

Before presenting the “title of liberty” to his people, Captain Moroni clothed himself in full battle attire, which included “gird[ing] on his armor about his loins” (Alma 46:13).[4] The next two verses emphasize that the “true believers in Christ took upon them, gladly, the name of Christ” (Alma 46:14–15).[5] After Moroni gave his rallying speech, these true followers of Christ followed Moroni’s lead and “came running together with their armor girded about their loins” (21).

Importantly, these verses link the physical armor protecting the loins of these faithful warriors with the spiritual protections and powers afforded by their being true Christians. In the very same verse mentioning their armor, we are again reminded that they were not “ashamed to take upon them the name of Christ” (21).

The breastplate was one of the main pieces of armor that protected the “more vital parts of the body” for Nephite soldiers (Alma 43:38). In one battle, Zarahemnah, the leader of a Lamanite-Zoramite-Amalekite coalition, claimed that the Nephites’ military prowess was simply due to their “cunning” in preparing themselves with “breastplates and … shields,” (Alma 44:9), which no one in Zarahemnah’s army had (Alma 43:21).

Ironically, as Mormon made it clear, Zarehemnah had things backwards. The Nephites’ most important advantage was due to their being “inspired by a better cause” (Alma 43:45), for Captain Moroni had “inspired their hearts with … thoughts of their lands, their liberty, yea, their freedom from bondage” (v. 48). Like a breastplate, the righteousness of their hearts proved to be the most vital protection against their enemies.

Feet shod with the preparation of the gospel of peace

When testifying before King Noah and his priests, Abinadi made four successive references to the feet of those who “bring good tidings” and “publish peace” (Mosiah 15:15–18). In several other Book of Mormon stories, one army would surrender to another by throwing down their weapons at the feet of their enemy. In one instance, the enemy soldiers “threw down their weapons of war at the feet of Moroni, and entered into a covenant of peace” (Alma 44:15). In another, they “cast them at the feet of the Nephites, pleading for mercy” (Alma 55:23). These stories suggest that feet and peace were linked ideas in both religious and military contexts.[6]

When the fully armored Nephites faced an army much bigger than their own, it was the enemy soldiers who were “exceedingly afraid” because they were “not armed with breastplates, nor shields” (Alma 43:21). Thus, in a least one Book of Mormon story, shields are connected to confidence or faith, while those without shields felt just the opposite—fear.

While head-plates (the term for protective head gear in the Book of Mormon)[7] aren’t specifically linked to salvation in the Book of Mormon, the head which they were designed to protect is. Concerning Christ, King Benjamin taught, “And under this head ye are made free, and there is no other head whereby ye can be made free. There is no other name given whereby salvation cometh” (Mosiah 5:8). Although “head” likely means a “chief” or “leader” in this case,[8] it also seems to have reference to one’s forehead, where the name of the Lord would symbolically be written.[9] Like a helmet, the name of Christ offers protection and salvation for all who have it symbolically written in their foreheads (see Revelation 22:4).

In the Book of Mormon, the sword is often symbolically linked with God’s divine justice.[10] However, in some cases it is also linked with the God’s Spirit. For instance, after Abinadi made his case against King Noah and his priests, we learn that “the people of king Noah durst not lay their hands on him, for the Spirit of the Lord was upon him” (Mosiah 13:5).[11] Two verses later, Abinadi declared, “therefore I finish my message. Yea, and I perceive that it cuts you to your hearts” (v. 7).[12] In another case we learn that God’s justice and truth “cutteth [the guilty] to the very center” (1 Nephi 16:2).

We can be confident that it is the Spirit which facilitates this sword-like cutting into the heart because Nephi had earlier taught, “for when a man speaketh by the power of the Holy Ghost the power of the Holy Ghost carrieth it unto the hearts of the children of men” (2 Nephi 33:1). In a more positive light, when a “small voice”[13] from heaven was heard among the people in 3 Nephi 11:3, “it did pierce them to the very soul, and did cause their hearts to burn.” Whether communicating God’s justice, truth, or peace, the Holy Ghost has the power to cut or pierce the hearts of men like a sword.

These connections demonstrate that armor-of-God themes are not absent from the Book of Mormon.[14] Rather, the symbolic value of armor can be seen in a number of its passages, and in some cases, the spiritual attributes associated with specific pieces of armor are similar to those developed in ancient Israelite warfare, as well as in Ephesians 6 and Doctrine and Covenants 27. What makes the Book of Mormon’s references to armor so powerful is that they are not just casual details inserted into combat narratives. Instead, the use of various types of armor, and the lack thereof, was often a major factor in deciding the outcome of military conflicts.[15]

For instance, we learn that Zarahemnah’s army “did fall exceedingly fast” because “their naked skins and their bare heads were exposed to the sharp swords of the Nephites” (Alma 44:18). In contrast, the Nephites only “now and then” lost a soldier because “their breastplates, and their armshields, and their head-plates” were protecting the “more vital parts of the body” (Alma 43:38).[16] The differences in Nephite and Lamanite battle attire help drive home exactly how important physical—and by analogy, spiritual—armor really is. After reviewing each piece of the spiritual armor of God, Elder Robert D. Hales exclaimed, “We need this armor!”[17]

Elder Joseph B. Wirthlin warned that Lucifer “seeks to find any chink in the armor of each person. He knows our weaknesses and knows how to exploit them if we allow him to do so.”[18] In response to this threat, we can follow Captain Moroni’s example by preparing ourselves and others with full coats of spiritual armor. Elder N. Eldon Tanner taught, “Examine your armor. Is there an unguarded or unprotected place? Determine now to add whatever part is missing.”[19]

Because mortality is a constant spiritual battleground, the need for spiritual armor is ever present. For those who have entered into sacred temple covenants, Elder Russell M. Nelson taught, “Wearing the temple garment has deep symbolic significance. … Just as the Savior exemplified the need to endure to the end, we wear the garment faithfully as part of the enduring armor of God.”[20] Those who put on the whole armor of God and never take it off will, like King Mosiah, reach end of their lives having “warred a good warfare, walking uprightly before God” (Alma 1:1).[21]

[3] It seems likely that Lehi was loosely referencing Isaiah 59:17: “For he put on righteousness as a breastplate, and an helmet of salvation upon his head.”

[4] See “The Armor of God,” New Era, January 2009, 23, online at lds.org: “Loins means the area between the hips and abdomen. Girt means tied around firmly with a belt. Generally, to ‘gird your loins’ means to prepare for action.”

[16] For a treatment of the ironic differences in these groups’ battle attire, see Parrish Brady and Shon Hopkin, “The Zoramites and Costly Apparel: Symbolism and Irony,” Journal of the Book of Mormon and Other Restoration Scripture 22, no. 1 (2013): 40–53; Book of Mormon Central, “Why did Mormon Emphasize the Zoramites’ Costly Apparel? (Alma 31:28),” KnoWhy 283 (March 6, 2017).

These are powerful observations and they have lifted me this morning. Just a note that Ephesian’s description of the Armor of God does not end with verse 17. The punctuation does not show the ‘.’ Period until the end of verse 20. Most stop reading in verse 17 which leaves out Paul’s ‘why’. The armor has multiple purposes. D&C 27 declares that we may withstand evil with this armor and Ephesians declares that the armor is worn that we may open our mouths boldly in declaring the gospel. “that I may open my mouth boldly, to make known the mystery of the gospel, 20 For which I am an ambassador in bonds: that therein I may speak boldly, as I ought to speak.” Wars show armor physically in the BoM and the symbolism to the spiritual armor is enlightening. A little more subtle is the armor the sons is Mosiah, Alma, Samuel and others wore as they preached the gospel and invited others to come unto Christ. They wore their spiritual armor and it was visible to the reader who remembers Paul’s why - to open our mouths boldly to make known the gospel!