What Do the Kinderhook Plates Reveal About Joseph Smith’s Gift of Translation? | Meridian Magazine 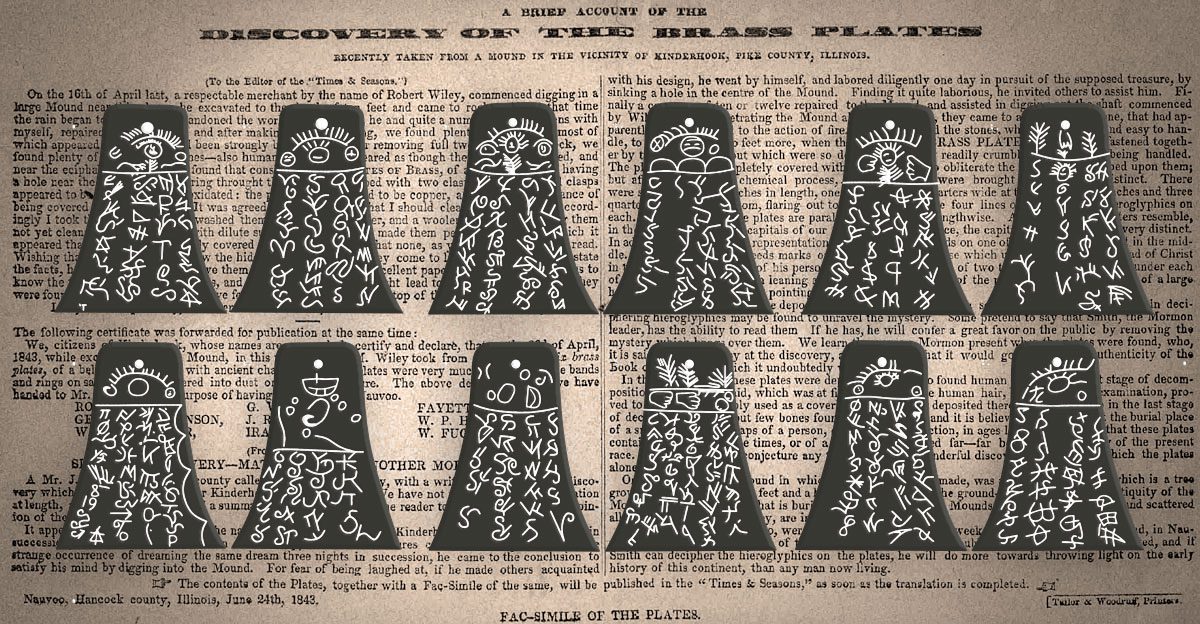 What Do the Kinderhook Plates Reveal About Joseph Smith’s Gift of Translation?

“Knowest thou of any one that can translate? For I am desirous that these records should be translated into our language; for, perhaps, they will give us a knowledge of a remnant of the people who have been destroyed …. Now Ammon said unto him: I can assuredly tell thee, O king, of a man that can translate the records; for he has wherewith that he can look, and translate all records that are of ancient date; and it is a gift from God.”
Mosiah 8:12–13

In the first week of May 1843, six bell-shaped brass plates, engraved on both sides, were brought to Nauvoo by people wanting to see if Joseph Smith would translate them. These odd plates had supposedly been dug up a week or so earlier in Kinderhook, Illinois, about 60 miles to the south.[1] Local news spread rapidly of their arrival, along with great anticipation for the presumed, forthcoming translation from Joseph. The Times and Seasons, then under the editorship of John Taylor, proclaimed confidently, “We have no doubt, however, but Mr. Smith will be able to translate.”[2]

Charlotte Haven, a non-Mormon in Nauvoo at the time, claimed to have heard from an unidentified friend that Joseph “said that the figures or writing on them was similar to that in which the Book of Mormon was written” and “thought that by the help of revelation he would be able to translate them. So a sequel to that holy book may soon be expected.”[3]

In a letter to John Van Cott, Parley P. Pratt gave a brief report of the plates and ambiguously said, “you will hear more soon on this subject.”[4] Another non-Mormon, who was there when Joseph Smith looked at the six plates, got the impression that Joseph believed he would “be able to decipher them,” and went on to tell the editor of the New York Herald, “You may expect something very remarkable pretty soon.”[5]

Decades later, however, one of the men involved in digging them up confessed that the plates were a forgery, perpetrated with the intent of fooling Joseph Smith.[6] Modern scientific testing of the one remaining plate confirms they were created using 19th century methods.[7] So did Joseph fall for the hoax? Not quite. He briefly gave these artifacts due consideration, but did not try to acquire them, retain them, or ultimately find them of any value.

Despite all the anticipation for a “sequel” to the Book of Mormon, nothing ever came.[8] No translation was ever produced or published. No manuscript of a purported translation has ever turned up.[9] Both William Clayton and Parley P. Pratt mentioned what appear to be some preliminary interpretations of a “portion” of the plates, which they attributed to Joseph,[10] but Joseph himself never provided any kind of translation, in full or in part.

When the plates were first brought to Joseph, rather than utilize any revelatory tools— such as prayer or a seer stone —Joseph sent “for [his] Hebrew Bible & Lexicon.”[11] An eyewitness remembered him also comparing the characters on the plates with “his Egyptian alphabet,”[12] and Pratt said they were being compared to the Egyptian papyri in Joseph’s possession.[13]

In other words, Joseph took preliminary steps toward an ordinary translation by comparing the squiggles on these plates to other ancient writings he was familiar with. This apparently produced no findings of any significance. If he ever sought out a revelatory translation, he evidently never received or claimed to have received one.[14]

The evidence from Joseph Smith’s journal for early May 1843 indicates that, “whatever JS initially thought about the plates, he soon lost interest in them.”[15] The numerous entries in Joseph’s journal indicate that Joseph was busy entertaining several guests, holding court, attending business and religious meetings, overseeing economic transactions, and much more—but only one brief mention of the Kinderhook Plates is made.[16] Some evidence even suggests Joseph wanted them examined by the Antiquarian Society of Philadelphia,[17] so perhaps Joseph even suspected their fraudulence or had concluded that they were not religiously significant.

In the Book of Mormon, when Limhi desired to know the contents of the ancient Jaredite plates, he asked Ammon, “Knowest thou of any one that can translate?” Ammon responded by telling him of King Mosiah, who could use his divine gift of seership to “look, and translate all records that are of ancient date” (Mosiah 8:12–13).

Likewise, some of the men sincerely bringing the Kinderhook plates to Joseph Smith hoped he would use his gift of seership to look into his seer stone and translate the plates.[18] The Kinderhook story reminds us that the gifts of the Spirit are not to be used to satisfy the idle curiosities of man. Instead, Joseph approached these artifacts by using ordinary language translation methods, and in the end did not produce even a proposed translation.

In fact, evidence suggests his secular examination efforts did not go very far. Analysis from historians Mark Ashurst-McGee and Don Bradley indicate that the translated “portion” mentioned by William Clayton and Parley P. Pratt comes from a single “boat-shaped” character in the Egyptian Alphabet (a vaguely similar character appears on one of the Kinderhook Plates facsimiles).[19] If he made any effort to acquire a revelatory translation, that also did not succeed. Today, we can see why: the Kinderhook plates were not legitimate. They were not “of ancient date,” so his gift of translation did not come to bear.

Figure 3 Illustration o the “boat-shaped” character in the Kinderhook plates and the Grammar and Alphabet of the Egyptian Language. Image via Book of Mormon Central.

While some critics try to use this story as evidence that everything about Joseph Smith was a fraud, the historical evidence suggests that Joseph ultimately did not fall for the hoax—he never tried to purchase the plates, hire scribes, and go into translation mode, like he did with the ancient Egyptian papyri he had purchased in Ohio. He never produced a “Book of Kinderhook.”[20] Whatever Joseph Smith may have thought of the Kinderhook plates, the Lord could not be fooled. God would not and did not reveal a translation of these bogus artifacts.

The more universal message from the Kinderhook incident is that Joseph’s ability to translate, like the case of Mosiah’s in the Book of Mormon, was a gift from God, and only worked when God enabled him to do His will. The gift of “the interpretation of languages,” like all spiritual gifts, “come[s] by the Spirit of Christ; and they come unto every man severally, according as [Christ] will” (Moroni 10:16). Like Joseph and Mosiah, we all have gifts from the Lord, which can only be properly used to build-up the kingdom of God. If we try to use these gifts from the Lord for inappropriate or irrelevant purposes, we can expect underwhelming results, like those from the case of the Kinderhook plates.

[2] “Ancient Records,” Times and Seasons 4, no. 12, May 1, 1843, 186. However, the editor had to confess that at the time, he did not know Joseph’s opinion of the plates: “Mr. Smith has had those plates, what his opinion concerning them is, we have not yet ascertained.”

[5] “A Gentile,” letter to James Gordon Bennett, May 7, 1843, in “Late and Interesting from the Mormon Empire on the Upper Mississippi,” New York Herald, May 30, 1843. The editor of the Quincy Whig even stoked the fires: “Some pretend to say, that Smith the Mormon leader, has the ability to read them. … if Smith can decipher the hieroglyphics on the plates, he will do more towards throwing light on the early history of this continent, than any man now living.” “Singular Discovery—Material for Another Mormon Book,” Times and Seasons 4, no. 12, May 1, 1843, 186–187; originally published in the Quincy Whig 6, no. 2, May 3, 1843.

[8] Near the end of June, a broadside published by John Taylor and Wilford Woodruff, still promised, “The contents of the Plates, together with a Fac-simile of the same, will be published in the ‘Times & Seasons,’ as soon as the translation is completed.” See “A Brief Account of the Discovery of the Brass Plates Recently Taken from a Mound near Kinderhook, Pike County, Illinois,” (Taylor & Woodruff, June 24, 1843).

[18] Years later, in a letter to a Mr. Flagg, one of the men who brought the plates to Nauvoo indicated that he did not know, at the time, that the plates were a hoax, and that he was sincerely interested in learning more about them. See W.P. Harris to Mr. Flagg, April 25, 1855, in “A Hoax: Reminiscences of an Old Kinderhook Mystery,” Journal of the Illinois State Historical Society 5 (July 1912): 271–273.

[20] Richard Lyman Bushman, Joseph Smith: Rough Stone Rolling (New York, NY: Alfred A. Knopf, 2005), 490: “After the first meeting, no further mention was made of translation, and the Kinderhook plates dropped out of sight. Joseph may not have detected the fraud, but he did not swing into a full-fledged translation as he had with the Egyptian scrolls. The trap did not quite spring shut, which foiled the conspirators’ original plan. Instead of exposing the plot immediately, as they had probably intended to do, they said nothing until 1879, when one of them signed an affidavit describing the fabrication.”

I found this article very interesting. Similar to Mark Hoffman trying to foist his fraudulent documents upon the world in 1985. The leaders of the LDS Church took an initial interest in the documents, but only described them as "interesting." Many people were deluded and some even left the church because of these forgeries. I doubt many of them returned to activity even after the documents were proven to be fraudulent. We still have to be vigilant today. There are so many influences out there attempting to dissuade the faithful.