What Did Alma Reveal about the Savior’s Mission? | Meridian Magazine 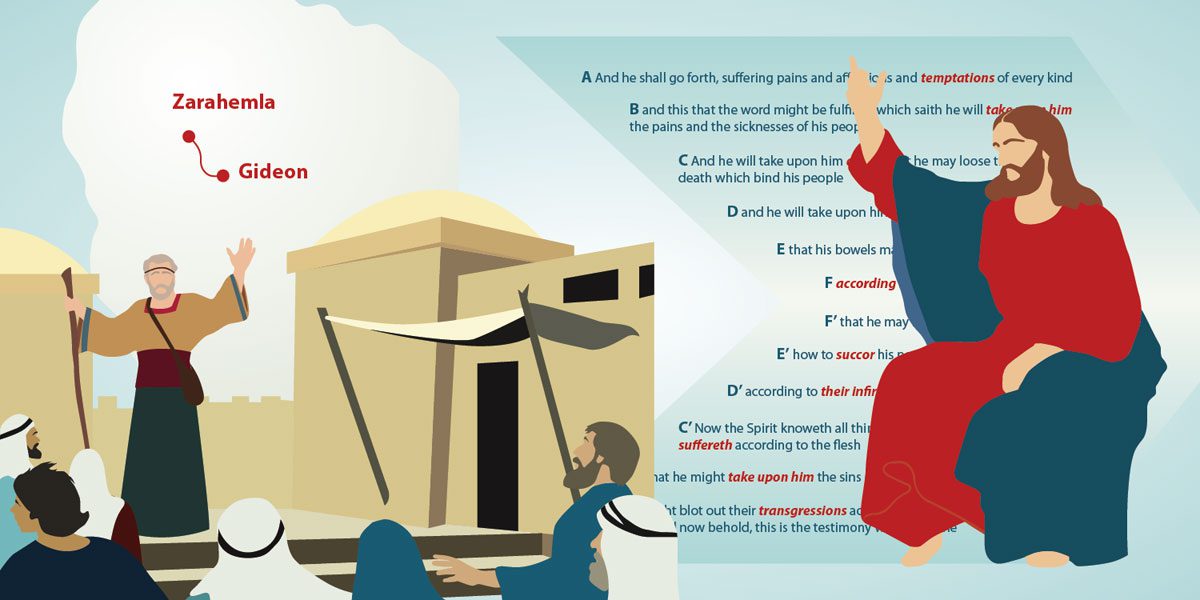 What Did Alma Reveal about the Savior’s Mission?

When Alma visited the city of Gideon, he was pleased to find the people there were living righteously (Alma 7:5–6, 17–20). Because of their righteousness, Alma was permitted to share with them important truths about the Savior’s atoning sacrifice that he had not shared in Zarahemla.

Alma started by teaching about the birth of the Son of God (Alma 7:10),[1] and then taught that the Savior would “go forth, suffering pains and afflictions and temptations of every kind; and this that the word might be fulfilled which saith he will take upon him the pains and the sicknesses of his people” (Alma 7:11, emphasis added). Alma appears to have been quoting or alluding to Isaiah 53:4, which more accurately speaks of “pains” and “sicknesses” in Hebrew, rather than “griefs” and “sorrows” as found in the King James Bible.[2]

As Alma testified of the Savior, he organized his thoughts into a chiasm—a literary pattern where key words, phrases, or ideas are repeated in reverse order

Alma’s understanding of Christ’s atoning sacrifice was based both on his reading of scripture (specifically Isaiah) and personal knowledge revealed by the Holy Spirit (Alma 7:9, 26). This sets an example for readers today, who can likewise learn eternal truths through both scripture study and personal revelation.

The center is typically the most important part of a chiasm, thus this pattern places emphasis on the fact that the Savior would suffer all of this “according to the flesh.” Alma described the Atonement in intensely physical terms. His comprehensive list of things Christ would take upon himself is comprised largely of physical suffering: pains, sicknesses, infirmities, and death. But Alma also included the crucial, spiritual forms of suffering: temptations, sins, and transgressions.

Alma’s inspired choice to only share this information with those whom he sensed by the Spirit were better spiritually prepared also teaches an important principle: “Give not that which is holy unto the dogs, neither cast ye your pearls before swine” (Matthew 7:6).

Regarding Alma’s teachings of Christ, his use of chiasmus makes it clear that Christ’s mortal nature—the “flesh”—was an essential part of His Atonement. It was His mortal nature that enabled Him to suffer in Gethsemane, and to endure death at Golgotha. But Alma also taught that Christ’s mortal experience itself—His “go[ing] forth” and experiencing the “pains, afflictions, and temptations” of mortality—was a vital aspect of His atoning sacrifice.[4]

This aspect of His Atonement enabled Him to be merciful and succor all who come unto Him during their own times of suffering. Elder Dallin H. Oaks recently taught:

Our Savior’s Atonement does more than assure us of immortality by a universal resurrection and give us the opportunity to be cleansed from sin by repentance and baptism. His Atonement also provides the opportunity to call upon Him who has experienced all of our mortal infirmities to give us the strength to bear the burdens of mortality. He knows of our anguish, and He is there for us.[5]

The Savior has suffered not just for our sins and iniquities—but also for our physical pains and anguish, our weaknesses and shortcomings, our fears and frustrations, our disappointments and discouragement, our regrets and remorse, our despair and desperation, the injustices and inequities we experience, and the emotional distresses that beset us.

Elder Bednar concluded, “There is no physical pain, no spiritual wound, no anguish of soul or heartache, no infirmity or weakness you or I ever confront in mortality that the Savior did not experience first.”[6]