What Converted Sidney Rigdon to the Book of Mormon? | Meridian Magazine 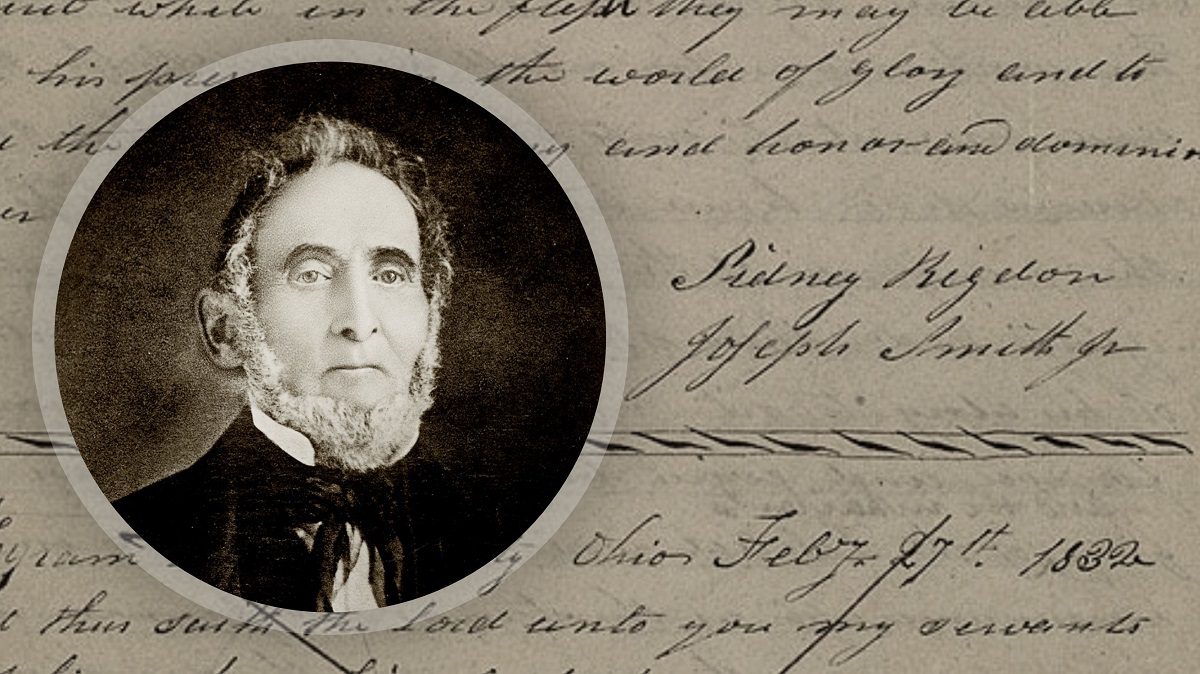 What Converted Sidney Rigdon to the Book of Mormon?

“Behold, verily, verily, I say unto my servant Sidney, I have looked upon thee and thy works. I have heard thy prayers, and prepared thee for a greater work.” Doctrine and Covenants 35:3

Sidney Rigdon had spent a decade from 1821–1830 as a respected minister and impressive preacher of the Baptist faith in Pennsylvania and Ohio when four missionaries—Oliver Cowdery, Peter Whimter Jr., Parley P. Pratt, and Zeba Peterson—came to Mentor, Ohio in October 1830 with the Book of Mormon.1 Rigdon was Pratt’s former minister and mentor, and had been “looking for the pure New Testament church.”2 Pratt, after discovering and converting to the Book of Mormon himself, hoped that Rigdon, too, would recognize it as the word of God. Thus, Rigdon’s home was the first one in that area visited by the missionaries.3

Initially, Rigdon “felt very much prejudiced” against the Book of Mormon.4 Nonetheless, he agreed to read it and “see what claim it has upon my faith.”5 He assured them that he would “give it a full investigation.”6 In the meantime, he was willing to allow Oliver Cowdery and Parley Pratt to preach to his congregation, and encouraged the audience to “give the matter a careful investigation; and not turn against it, without being fully convinced” that it was false.7

Rigdon himself set the example. As he began reading it, he was skeptical. His daughter said “he did not believe a word of it” at first, and others reported that he “partly condemned it.”8 But he did not drop the matter after only a superficial purview of the book. As his son later remembered, Rigdon “got so engaged in [the book] that it was hard for him to quit long enough to eat his meals. He read it day and night.”9

When the missionaries returned to follow-up, Rigdon asked about Joseph’s education. Learning that Joseph “had hardly a common school education,” Rigdon was convinced Joseph had not written the Book of Mormon.10 He “expressed the utmost amazement that such a man should write a book which seemed to shed a flood of light on all the old scriptures, open their profoundest mysteries, and give them perfect consistency and complete system.” Thus, he reasoned, “If God ever gave a revelation, surely this must be divine.”11

Inspired and spiritually motivated, Rigdon, above all, sought divine confirmation of the book’s veracity. Oliver had borne witness to him of the angel and the plates, but Rigdon wanted his own witness.12 Finally, he received a vision, wherein he was shown the corruption of various religious teachings of the day, including his own version of Baptist preaching. Then, in his vision, as reported by Ezra Booth, Rigdon saw the Book of Mormon, “and it was pure as an angel; this was a testimony from God; that the Book of Mormon, was a Divine Revelation.”13

Conscious of how acting upon this revelation would impact his family,  Rigdon counseled with his wife Phebe, noting that it would mean giving up his professional career as a preacher, leading them “into poverty.” She responded with resolute faith of her own, declaring, “I have counted the cost, and I am perfectly satisfied to follow you; it is my desire to do the will of God, come life or come death.”14

A few weeks later, Rigdon desired to meet the Prophet Joseph Smith, and traveled with Edward Partridge to New York for that purpose in December 1830. Joseph then received a revelation, wherein the Lord told Rigdon that “a greater work” had been prepared for him (D&C 35:3). In the ensuing months and years from 1831 until 1844, he faithfully assisted Joseph in a variety of capacities, as directed by revelation. He was a joint recipient (with Joseph) of the call for the Saints to gather in Ohio (D&C 37), and he was also a co-recipient of the great vision of the hereafter, recorded in Doctrine and Covenants 76. He became a counselor to Joseph in the First Presidency, delivered one of the main sermons at the dedicatory services for the Kirtland Temple, and “took an active part in the founding of Nauvoo,” as his health permitted.15

The basis of Rigdon’s conversion, from first to last, was his spiritual experience confirming what he had learned about the miraculous content and coming forth of the Book of Mormon. Once converted by a vision of the pure angelic message of the Book of Mormon, Sidney Rigdon quickly became an important and influential figure in the early history of the Restored Church of Jesus Christ.

He was so important, in fact, that critics seeking to explain away the Book of Mormon came up with the claim that Rigdon was instrumental in writing it. Such theories, however, soon were found to be counter to documentary evidence and inconsistent with historical events. As several knowledgeable witnesses attested, Rigdon first saw the Book of Mormon in November 1830, well after it had already been published, and he first met Joseph Smith in person in December 1830—too late to have collaborated on the composition of the Book of Mormon.16

As Rigdon learned of the accusation that he wrote the Book of Mormon, he immediately sought to set the record straight. On one occasion, in front a large gathering of people, he declared:

Although he continued to serve in the First Presidency, Rigdon was physically ill and grew somewhat estranged from Joseph Smith in the final years before Joseph’s martyrdom.18 When the main body of the Saints were inspired to follow Brigham Young, Rigdon went back to Pittsburgh and established his own Book-of-Mormon-believing Church. Later in life, even as some critics tried to get him to admit that he was the true author of the Book of Mormon, Rigdon persisted in bearing witness to its divine authenticity. He believed that his earlier years of coming to know the biblical word of God intimately as a Baptist minister had specially prepared him to recognize the Book of Mormon as the word of God.19

Wickliffe Rigdon, Sidney’s son, remembered that late in life, “I found him as firm as ever in declaring that he himself had nothing whatever to do in writing the book [of Mormon], and that Joseph Smith received it from an angel.”20 Wickliffe said his father maintained this view right up until his death. Each of Rigdon’s other children likewise insisted that this was true.21

Thus, whatever imperfections Sidney Rigdon had, he was a defender and advocate of the divine truthfulness of the Book of Mormon from the time he became converted until his dying breath. For that, he deserves gratitude from believers in the Book of Mormon today, as well as for his many other important and dedicated contributions in building up of the kingdom of God during the earliest years of the Restoration.

16.See Matthew Roper and Paul J. Fields, “The Historical Case against Sidney Rigdon’s Authorship of the Book of Mormon,” Mormon Studies Review 23, no. 1 (2011): 111–123. Rigdon’s authorship is often connected to the so-called “Spaulding theory,” hypothesizing that a manuscript written by Solomon Spaulding was used as the basis for the Book of Mormon, with additions/edits from Rigdon or another author. On this theory, see Matthew Roper, “The Mythical ‘Manuscript Found’,” FARMS Review 17, no. 2 (2005): 7–140; Matthew Roper, “Myth, Memory, and ‘Manuscript Found’,” FARMS Review 21, no. 2 (2009): 179–223. See also Kent P. Jackson, ed., Manuscript Found: The Complete Original “Spaulding Manuscript” (Provo, UT: BYU Religious Studies Center, 1996).

What happened to his Cambelite membership and leadership, is that just included in Baptist at this point?