What Caused the Darkness and Destruction in the 34th Year? | Meridian Magazine 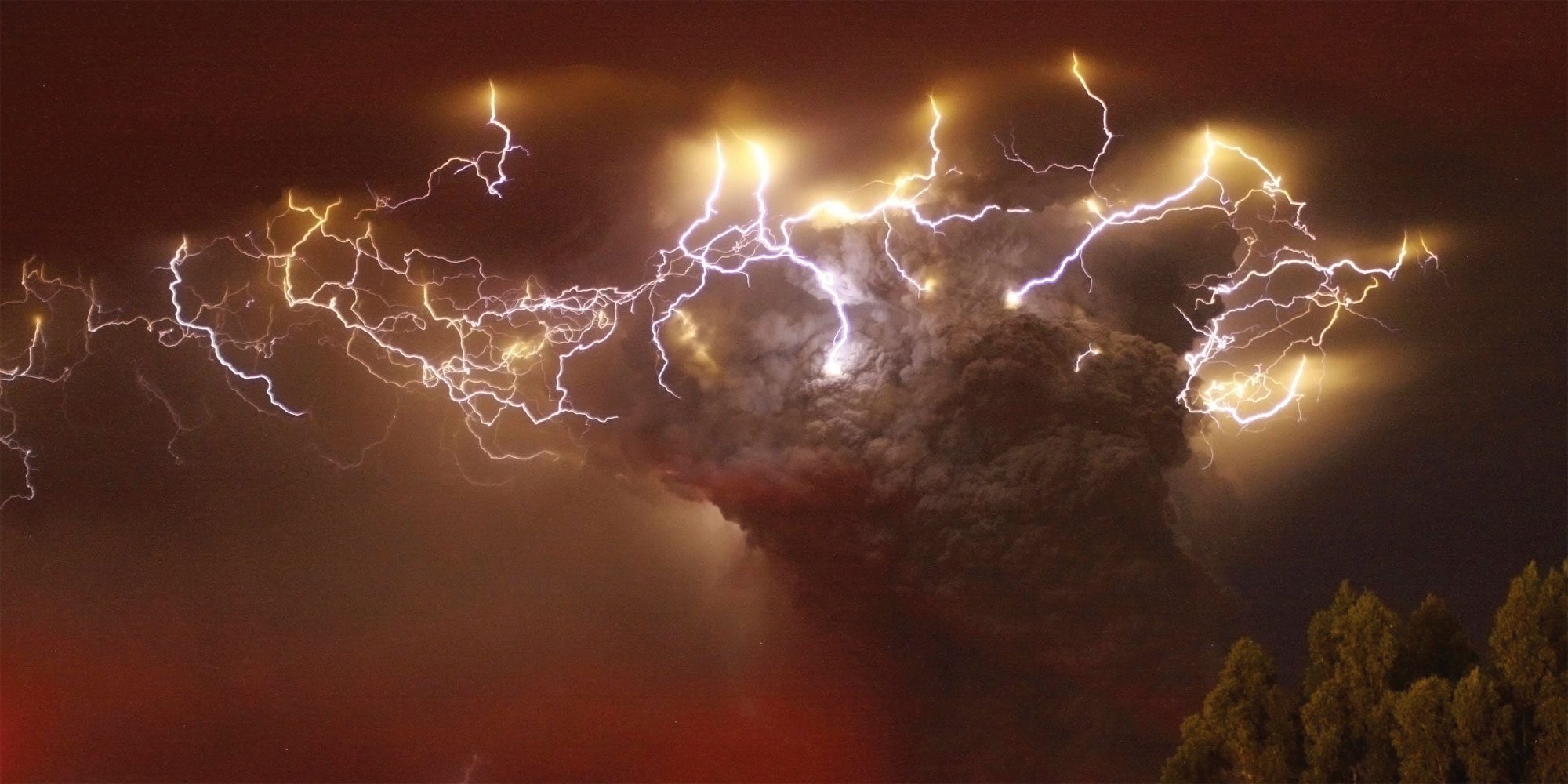 What Caused the Darkness and Destruction in the 34th Year?

“And it came to pass that there was thick darkness upon all the face of the land, insomuch that the inhabitants thereof who had not fallen could feel the vapor of darkness”
3 Nephi 8:20

In the thirty and fourth year, Mormon carefully documented “a great and terrible tempest … terrible thunder … exceedingly sharp lightnings” and “thick darkness,” even a “vapor of darkness” which could be felt, and prevented the lighting of fire (3 Nephi 8:6–7, 20–22). This had been predicted in detail by prophets such as Nephi son of Lehi, Zenos, and Samuel the Lamanite.[1]

In the 1960s, Hugh Nibley compared these Book of Mormon accounts to descriptions of earthquakes and volcanic eruptions.[2] Since that time, several other scholars, including many professional geologists, have examined these accounts and widely agreed that the three-day darkness and other destructive forces described in the Book of Mormon accounts involve a volcanic eruption.[3]

The main reason for this is the three-day period of darkness.[4] Geologists who have studied the 3 Nephi 8 account generally agree that nothing except volcanic ash and dust clouds could account for the three days of darkness, as it is described.[5] Not only the darkness, but the excessive lightning, thundering, tempest, and many other features can all be explained by volcanic activity.[6]

In the most recent and thorough analysis by a professional geologist, Jerry Grover, Jr. concluded, “In order to account for the destruction described in 3rd Nephi, it is clear that a volcano and a regional earthquake are indicated.”[7] Earthquakes are known to trigger volcanic eruptions, especially when a volcano is located on or near a fault-line.[8]

After analyzing all the destructive elements mentioned in the Book of Mormon accounts, Grover determined that the best-fit scenario is a strike-slip fault zone, near a coast, with an active volcano nearby.[9] There is at least one fault system in the Americas which meets these criteria: the Veracruz fault system in Mexico.[10] Grover noted, “The Veracruz fault segment … is a strike-slip fault, … located on and adjacent to the coastal plains … [and] has a major volcano sitting directly on the fault system, the volcano San Martín.”[11]

In some Book of Mormon geography models, Veracruz, Mexico is part of the land northward, which experienced greater damage during the cataclysmic events (3 Nephi 8:12).[12] Interestingly, while it is impossible to prove the exact timing of a volcanic eruption, current evidence indicates that the San Martín volcano likely experienced an eruption event in the first century AD.[13] Further evidence suggests that during or around the first century AD, Mesoamerica experienced widespread volcanic activity.[14]

Additional evidence comes from ice core samples from Greenland and Antarctica. While the estimated dates are still not exact, using ice cores “tends to be fairly good” with margins of error of only a few years.[15] After examining documented dates for volcanic events in four different ice core samples, geologist Benjamin R. Jordan concluded, “There is evidence for large eruptions [somewhere in the world], within the margin of error, for the period of AD 30 to 40.”[16]

Ice cores, therefore, offer evidence that there was a major volcanic event close to the timing of Christ’s death.[17] Yet ice cores have the drawback of not being able to pinpoint the location of the volcanic events they document from all around the world.[18] A correlation to Mesoamerica, however, is possible, given the evidence already mentioned for extensive volcanic activity around this time.[19]

In graphic detail, the Book of Mormon documents a divinely caused natural disaster occurring at the time of Christ’s death that many geologists agree appears to have involved a volcanic eruption, most likely occurring simultaneously with an earthquake along a strike-slip fault line. Thus far, current geologic evidence supports the following conclusions:

While none of this can be linked directly to the events described in 3 Nephi, it goes to show that, as with the sign at Christ’s birth,[20] there is nothing scientifically implausible in the account given in 3 Nephi 8–10. In fact, the fulfillment of this prophesied volcanic disaster is strikingly realistic, especially its three days of smoky vapor and thick darkness.

Also, as was the sign of great light at the time of Christ’s birth, the profound darkness at his death and time in the tomb is strongly symbolic. Just as the “excessive light surrounding Christ’s birth acts as a kind of morning,” the “darkness surrounding Christ’s death acts as a kind of evening.”[21] Alvin Benson aptly stated, “It appears that the earth was symbolically manifesting its gloom over the death of its creator.”[22]

But even the darkest of nights come to end. The darkness dissipated as the Savior conquered death, and within the year righteous Nephites and Lamanites witnessed the risen, glorified Lord in all his majesty (3 Nephi 11).

President Ezra Taft Benson taught, “The record of the Nephite history just prior to the Savior’s visit reveals many parallels to our own day as we anticipate the Savior’s second coming.”[23] This statement warns readers of further societal decay and impending darkness and destruction. But it also enables them to glimpse the grandeur and glory that is to follow for the humble and penitent who come unto Christ.

Neal Rappleye, “‘The Great and Terrible Judgements of the Lord’: Destruction and Disaster in 3 Nephi and the Geology of Mesoamerica,” Interpreter: A Journal of Mormon Scripture 15 (2015): 143–157.

[4] Kowallis, “In the Thirty and Fourth Year,” 173: “One of the common themes that can be found in almost all accounts of explosive volcanic eruptions is the darkness created by the fall of ash. This darkness may last for a few hours or a few days, and the historical descriptions mimic the terminology used in the Book of Mormon.” Benson, “Geological Upheaval,” 64: “Volcanic ash, smoke, and gases, along with dust and debris rising into the air from a large earthquake, could have produced the ‘vapor of darkness’ spoken of in 3 Nephi 8:20 and 10:13.” Ball, “An Hypothesis concerning the Three Days of Darkness,” 113: the “period of darkness was caused by an immense local cloud of volcanic ash.”

[5] An earthquake in 1811 felt throughout the eastern US reportedly caused an “awful darkness of the atmosphere,” however it only lasted briefly. Grover, Geology of the Book of Mormon, 156 explained that earthquakes are not known to cause lengthy periods of darkness. “The mists or vapors of darkness are described as being widespread. The only realistic explanation for this phenomenon is a volcanic ash/tephra cloud disseminated as a result of a volcanic eruption. Occasionally during the initial moments of earthquakes, dust can be generated from shaken buildings or by brief release of sometimes pungent soil gases, but these have never been observed in modern earthquakes to last more than a few hours, and the same is indicated for pre-modern earthquakes by historic anecdote. Earthquake dust has not been observed to inhibit ignition. Volcanic ash distribution has been historically documented to inhibit combustion and last for days at a time.” Also see Rappleye, “The Great and Terrible Judgements,” 153.

[14] Sorenson, Mormon’s Codex, 641–649; Grover, Geology of the Book of Mormon, 32–49. Grover’s work documents as many as six volcanos active around the first century AD, ranging from central Mexico to southern Guatemala.

[17] The exact year of Christ’s death is also uncertain and highly debated, though most scholars would place it around AD 30. See Thomas A. Wayment, “Appendix—The Birth and Death Dates of Jesus Christ,” in The Life and Teachings of Jesus Christ: From Bethlehem Through the Sermon on the Mount, ed. Richard Neitzel Holzapfel and Thomas A. Wayment (Salt Lake City, UT: Deseret Book, 2005), 383–394; Jeffrey R. Chadwick, “Dating the Death of Jesus Christ,” BYU Studies Quarterly 54, no. 4 (2015): 135–191.

[18] Jordan, “Volcanic Destruction in the Book of Mormon,” 87: “However, so far it is not possible to determine the exact geographic location of those eruptions.”

[19] Jordan, “Volcanic Destruction in the Book of Mormon,” 87, similarly argued, “the discovery of a volcanic eruption at Tacaná volcano [in Mesoamerica, ca. AD 25–72] during the period in question, combined with the ice-core record, seems to strengthen the argument for an eruption as part of the cause of destruction described in 3 Nephi.”