Were Nephite Prophets Familiar with the Passover Tradition? | Meridian Magazine 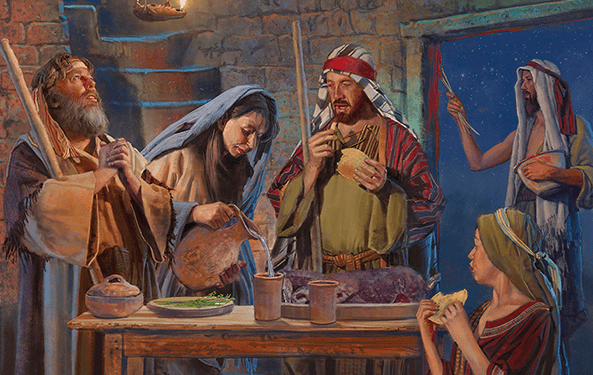 Were Nephite Prophets Familiar with the Passover Tradition?

“Therefore there was a law given them, yea, a law of performances and of ordinances, a law which they were to observe strictly from day to day, to keep them in remembrance of God and their duty towards him.”

Before the tenth and final plague in Egypt, the Lord told the Israelites to kill a lamb without blemish and wipe its blood on the doorframes of their homes (see Exodus 12:6–7). They were then given specific instructions to roast the lamb with fire and eat it along with unleavened bread and bitter herbs (see v. 8). The Lord explained that “the blood shall be to you for a token upon the houses where ye are: and when I see the blood, I will pass over you, and the plague shall not be upon you to destroy you, when I smite the land of Egypt” (v. 13). The Lord further told the Israelites that “this day shall be unto you for a memorial; and ye shall keep it a feast to the Lord throughout your generations” (v. 14).

The feast commemorating this important event later become known as the Passover because the destroying angel of the Lord passed over all those who had the blood of the lamb on their doorposts. According to David and Jo Ann Seely, “The elements of the Passover meal: the lamb, the blood, the unleavened bread, and the bitter herbs all pointed toward the coming of the Messiah and the redemption He would offer from sin, death, and hell.”[1]

While the Passover tradition is referred to quite frequently in the books of the Old Testament, they rarely associated the Passover lamb with a future Messiah.[2] The Book of Mormon, on the other hand, contains no direct references to the Passover. And yet its authors clearly understood that salvation comes through the atoning blood of Jesus Christ, whom they recognized as the Lamb of God.[3]

The first hint that they were familiar with the Passover tradition comes from Nephi’s connected visions in 1 Nephi 11–14. In these chapters, the Messiah is referred to as the “Lamb” on no less than 56 occasions![4] Terrence L. Szink has argued that Nephi would have been “familiar with the Exodus both in story form as he might have heard it from his father and through annual Israelite rituals such as the Passover as they were acted out.”[5] It’s possible, then, that Nephi’s early visions helped solidify for him, and for his future posterity, that the Passover tradition, including the Passover lamb, was meant to symbolize Jesus Christ.[6]

Several other stories in the Book of Mormon suggest that its peoples were likely familiar with the Passover. For example, several scholars have noted that Abinadi likely preached to King Noah and his priests during the festival of Pentecost (or Shavuot), which “marked the concluding phase of Passover.”[7] Matthew Roper has found several clues suggesting that the destruction reported in 3 Nephi may be “an ironic reversal of the Passover blessing of protection and deliverance.”[8]

John Welch has suggested that a Passover setting also makes sense in Alma 10:7–11, when Amulek fed Alma after his fast. “Indeed, if the Nephite calendar began the year in the fall, then their seventh month fell in the spring and was the month of Passover; … Assuming that Amulek was traveling to be with his close family relatives during the Passover season, perhaps he anticipated that Elijah was coming when the angel told him to return home to ‘feed a prophet of the Lord.’”[9]

Finally, there is good evidence that Alma was following an early Passover tradition when giving instruction to his three sons. The tradition held that a father should give different instructions to sons who often acted out three different roles—the wise son, the uninformed son, and the wicked son. This is very similar to Alma’s instructions to Helaman, Shiblon, and Corianton in Alma 35–42.[10] John Welch and Gordon Thomasson found that other themes in Alma’s sermon also indicate a Passover setting:

In light of these types of findings, Daniel C. Peterson remarked that the prophets who wrote the Book of Mormon seem to have known “remarkably much about the Jewish Passover.”[12] Although we might expect them to have mentioned the Passover more explicitly, it actually makes sense that they didn’t. According to John A. Tvedtnes, “Most references to the two festivals of Passover and unleavened bread [in the Old Testament] are found in the law of Moses. We must remember that the Book of Mormon is not a law code, but a book of history and religious teachings.”[13]

Book of Mormon prophets were clearly more interested in discussing what the performances and ordinances pointed to—Jesus Christ—than in explaining the details of their ritual worship. For instance, the prophet Abinadi taught that the “performances and ordinances” of the Law of Moses were merely “types of things to come,” and that “there could not any man be saved except it were through the redemption of God” (Mosiah 13:30–32).

This doesn’t mean, however, that reading Book of Mormon teachings in the context of the Passover tradition can’t be valuable or instructive. For example, the imagery of the “Lamb” in Nephi’s visions is more meaningful if it is connected to the Passover lamb. Not just any lamb would do for the Passover meal. It required a lamb without blemish, and Israelites would have remembered that the blood of this perfect lamb protected the families who applied it to the entryway of their homes. This was likely the imagery that came to Nephi’s mind when an angel exclaimed, “Behold the Lamb of God, yea, even the Son of the Eternal Father!” (1 Nephi 11:21).

In Alma 36, Alma discussed both of these themes—remembering Christ and remembering the Passover deliverance—in the same setting. In the outer layer of his chiastic counsel to Helaman, Alma declared, “I would that ye should do as I have done, in remembering the captivity of our fathers; for they were in bondage, and none could deliver them except it was the God of Abraham, and the God of Isaac, and the God of Jacob” (v. 2). Yet in the center of his chiasm, he related, “I remembered also to have heard my father prophesy unto the people concerning the coming of one Jesus Christ, a Son of God, to atone for the sins of the world (v. 17; emphasis added).[15]

This suggests that part of remembering Jesus Christ, as we commit to do in the sacramental prayer, is remembering how He has miraculously delivered His people.[16] For instance, the protective power of the blood of the Passover lamb can help us understand why we are admonished in the sacrament prayer to always remember the blood which Jesus shed for us. By symbolically applying Christ’s atoning blood to our own homes and families, just as the Israelites applied the blood of an unblemished lamb to their doorposts, we can receive spiritual protection from sin and danger.

These types of connections demonstrate that we, like the Nephites, would do well to remember the Passover tradition. Its profound imagery and symbolism continue to teach sacred and eternal truths about Jesus Christ and His role as the Lamb of God.

[2] One possible exception is Isaiah 53:7: “He was oppressed, and he was afflicted, yet he opened not his mouth: he is brought as a lamb to the slaughter, and as a sheep before her shearers is dumb, so he openeth not his mouth.”

[5] Terrence L. Szink, “Nephi and the Exodus,” in Rediscovering the Book of Mormon: Insights You May Have Missed Before, ed. John L. Sorenson and Melvin J. Thorne (Salt Lake City and Provo, UT: Deseret Book and FARMS, 1991), 39. See also, S. Kent Brown, “What Is Isaiah Doing in First Nephi?” in From Jerusalem to Zarahemla: Literary and Historical Studies of the Book of Mormon (Provo, UT: Religious Studies Center, Brigham Young University, 1998), 14–15.

[14] See RoseAnn Benson and Stephen D. Ricks, “Treaties and Covenants: Ancient Near Eastern Legal Terminology in the Book of Mormon,” Journal of Book of Mormon Studies 14, no. 1 (2005): 53: “The basis of this covenant is the Passover and the ‘passing through.’ God … declared the covenant terms after he rescued his enslaved people from physical and spiritual bondage by passing over their firstborn sons and by having the entire group pass through the Red Sea.”