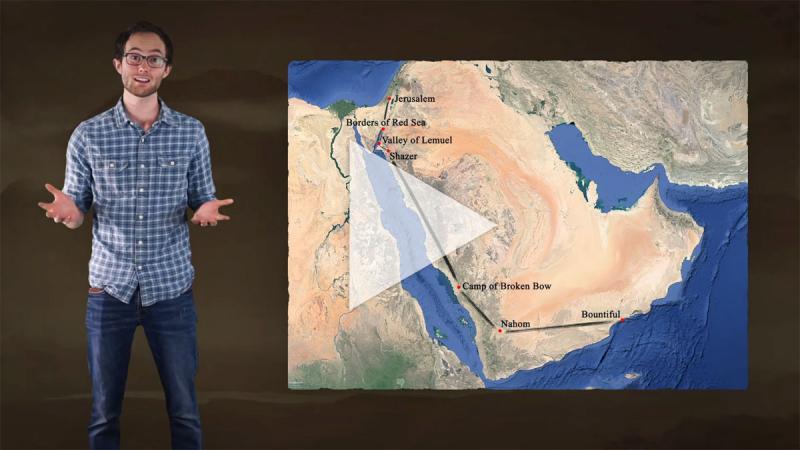 While the majority of the events described in the Book of Mormon took place in the Americas, the opening chapters are set in the ancient Near East. They tell of a prophet named Lehi, who, with his family and others, fled from Jerusalem. After traveling for years through a harsh wilderness, they reached a lush coastal region where they set sail across the ocean. Fortunately, the prophetic author of this record (Lehi’s son, Nephi) recorded many specific details about his family’s travels. These details include names and descriptions of locations, relative distances and directions, and travel conditions along the way.

For many years, researchers have been carefully studying Nephi’s account and comparing it with the known geography of ancient Israel and the Arabian Peninsula. The results of these ongoing studies have been both fascinating and faith promoting. Nearly every travel detail in Nephi’s account can now be connected with some plausible site, route, or ancient custom or practice. It would be impossible to briefly cover the depth and breadth of scholarship on this topic. Instead, Book of Mormon Central has created a video to introduce readers to this body of research and to highlight some of the compelling geographic evidence that if offers.

As you watch, you will follow in the footsteps of Lehi and his family as they journeyed from place to place through Palestine, along the borders of the Red Sea, and across the Arabian Peninsula. Along with artistic representations and generic images of Arabia and the Middle East, you will see photos and footage of some of the actual places where scholars believe Lehi’s family traveled or set up camp. Warren Aston, a Latter-day Saint researcher who has personally explored several of these sites, has explained that when important scriptural locations are “anchored in the real world, we can re-read the scriptural account with heightened appreciation for the story being told and its applications to our own life journey.”1

Book of Mormon Central hopes your love and appreciation of the Book of Mormon can grow as you place yourselves in the shoes—or, more appropriately, the sandals—of its founding prophets, as well as the other travelers, including courageous women, who had the faith to follow them. In addition, we believe that your faith can be strengthened or, if necessary, reignited as you consider the intimate relationships between Nephi’s account and locations that were far away and almost certainly unknown to Joseph Smith in 1829.

For the evidence which supports the claims made in this video, as well as a fairly comprehensive sampling of the available research on this topic, click on the Sources below.

So well done! Thank you.