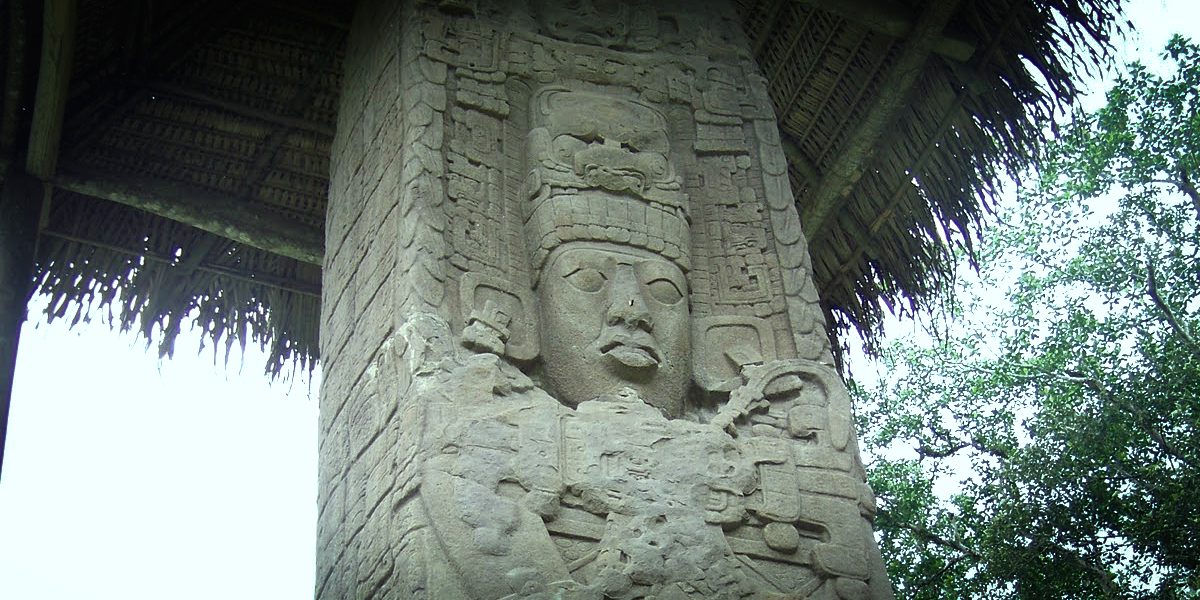 Many scholars have long recognized chiasmus as a characteristic literary feature of ancient Israelite and Near Eastern writing.[i] Since the Book of Mormon was predominately written on ancient American soil, however, the question may naturally arise: is there evidence that any ancient American authors knew about and used chiasmus? Several experts in pre-Columbian American poetics have concluded: yes, ancient American writers did use chiasmus in a variety of ways.[ii]

Allen J. Christenson first discovered chiasmus in K’iche’ Maya texts in the 1980s.[iii] Christenson found chiasmus present in several colonial-era Maya documents, including some elaborate examples in the Popol Vuh, which is “by far the most important K’iche’ document to have survived.”[iv] Other native Maya documents using chiasmus include Título C’oyoi, a native ritual drama called Rabinal Achi, and the Annals of the Cakchiquels (the K’iche’s biggest rivals).

However, not all colonial Mayan documents feature chiasmus and so Christenson compared those that did with those that did not. He noticed that writings which utilized chiasmus tended to be those written before 1580 by a member of the ruling lineage. These documents generally lacked Spanish or Christian influence, focused on pre-Columbian history or religion, and often explicitly claimed to be based on earlier written sources.[v] Hence, Christenson felt that “chiasmus is an indigenous literary form not employed by Colonial era Spanish writers,” and thus “may be useful in determining the relative antiquity of ancient writings composed by the K’iche’ Maya.”[vi]

chiasmus and parallelisms found in the ritual dramas of the Lacandon Maya to support their pre-Columbian origin.[x]

Chiasmus has also been found in definitively pre-Columbian texts. For example, Michela Craveri and Rogelio Valencia found chiasms in both the Dresden Codex and the Madrid Codex.[xi] These codices are both dated to the late post-Classic period (ca. AD 1200–1500), although both are believed to be, at least in part, copies of older material from the Classic period (AD 300–900).[xii]

Inscriptional texts from the Classic period also utilize chiasmus, such as the hieroglyphic stairs at Dos Pilas, an inscribed bone found at Tikal,[xiii] and Stela D at Pusihla.[xiv] At Yaxchilán, Josserand argued that the chiastic arrangement of Lintel 23 reveals the name of an otherwise unknown royal heir, who may have ruled during a key ten-year gap in Yaxchilán’s dynastic history.[xv]

According to Michael Carrasco, chiasmus was also used in inscriptions at Palenque, including the use of “envelope chiasmus”—where the beginning and end of a text form a chiasm—to frame three different historical narratives.[xvi] Hopkins and Josserand identified what is probably the most elaborate example of chiasmus among the Classic Mayan inscriptions: Quiriguá Stela C, featuring a 7-line chiasm with three parallel sets of triplets, instead of the usual couplet, in the middle.[xvii]

According to Kerry Hull, “The poetic and literary aspects of Maya hieroglyphic texts are just beginning to come into focus.” Thus there is still much to learn about the use of chiasmus and other poetic devices in ancient America. Nonetheless, current evidence supports “the presence of a poetic tradition at least as far back as the Early Classic period.”[xviii] Within that poetic tradition, Gretchen Whalen has stated that “chiasmus … is the culmination of Maya literary style.”[xix]

Using chiastic analysis as a tool has yielded several worthwhile results in the study of Maya literature. In terms of dating, the presence of chiasmus in colonial Maya manuscripts is commonly taken as evidence of a pre-Columbian background or origin of those texts. Since the Book of Mormon purports to be a religious document from pre-Columbian America, comparing how chiasmus is used by both Book of Mormon and Maya authors can be fruitful.

For instance, Christenson proposed that the “presence of chiasmus in highland Maya texts may suggest an oral tradition.”[xx] In the Book of Mormon, Carl Cranny found that chiasmus and other forms of parallelism occur more frequently in the parts that were originally given orally.[xxi]

A common feature of ancient American chiastic texts is “the presence of dialogue,” noting that often, “the dialogue was itself arranged as a chiasm.”[xxii] Nephi, at least, appears to have utilized chiasmus to structure dialogues with his brothers.[xxiii] Furthermore, revelatory dialogue, according to Terryl Givens, is one of the most significant features of the Book of Mormon text,[xxiv] and it is highlighted by a chiastic pattern on at least one occasion: the overarching structure of 1 Nephi places his revelatory dialogue with the Spirit and an angel as “the fulcrum on which the entire, complexly organized account of 1 Nephi balances.”[xxv]

A common feature of chiastic Maya writings “is their authorship by members of the indigenous ruling dynasty.”[xxvi] Kerry Hull takes this to mean that “expert use of highly paralleled forms was a prerequisite of rulers’ speech.” Thus, Hull has argued, “It is undoubtedly on ritual and other formal speech occasions where the full flowering of parallel structures can be found among the Maya.”[xxvii] This is consistent with Christenson’s findings that chiasmus was common in ritual dance dramas.[xxviii]

In this light, it is significant that King Benjamin’s speech, given on a formal, royal ceremonial occasion, is one of the most extensively chiastic and parallel-structured sections in all of the Book of Mormon (Mosiah 2–5).[xxix] Other examples of religious or political leaders speaking on formal or ceremonial occasions in the Book of Mormon, like both Alma 5 and 7, also feature a high use of chiasmus and other poetic parallelisms.[xxx]

Particular chiastic styles are also found in both Mesoamerica and the Book of Mormon. For example, 1 Nephi 11:1–3, when paired with 1 Nephi 14:29–30 forms an “envelope chiasm,” like those found at Palenque.[xxxi] In Mosiah 3:11–16 the overall chiastic structure is also framed by an envelope chiasm.[xxxii] Alma 29:1–7 features three sets of triplets at its center (Alma 29:4–5), as is similarly found at the chiastic center of Quiriguá Stela C.[xxxiii] Some Book of Mormon poetics also use identical key terms as those found in Mayan inscriptions.[xxxiv]

Allen J. Christenson, “The Use of Chiasmus in Ancient Mesoamerica” (FARMS Preliminary Report, 1988).

[viii] Nicholas A. Hopkins and J. Kathryn Josserand, “The Narrative Structure of Chol Folktales: One Thousand Years of Literary Tradition,” in Parallel Worlds, 29. See also Lydia Rodríguez, “From Discourse to Thought: An Ethnopoetic Analysis of Chol Mayan Folktale,” Signs and Society 4, no. 2 (2016): 295–296.

[ix] Gretchen Whalen, “The Power of the Paradigm: Continuity in Yucatec Maya Narrative,” paper delivered at the 1997 meeting of the Latin American Studies Association (April 17–19, 1997), 12; Charles Andrew Hofling, “A Comparison of Narrative Style in Mopan and Itzaj Mayan,” in Parallel Worlds, 403, 409–410.

[xi] Michela Craveri and Rogelio Valencia, “The Voice of Writing: Orality Traces in the Maya Codices,” in Tradition and Innovation in Mesoamerican Cultural History: A Homage to Tatiana A. Proskouriakoff, ed. Roberto Cantú and Aaron Sonnenschein (Munich, Ger: Lincom Europa, 2011), 100–103.

[xix] Whalen, “The Power of the Paradigm,” 12. This claim is first made on p. 10: “Chiasmic … form represents the most complete elaboration of Maya literary style.”

[xx] Christenson, “Use of Chiasmus by the Ancient K’iche’,” 318. This is typical of parallelism in most cultures around the world.

[xxii] Christenson, “Use of Chiasmus by the Ancient K’iche’,” 332. As Christenson pointed out (pp. 312–313) this was also a common use of chiasmus in Greek and Latin literature.

[xxxi] See Neal Rappleye, “‘The Things Which my Father Saw’: The Chiastic Inclusio of 1 Nephi 11–14,” at Studio et Quoque Fide: A Blog on Latter-day Saint Apologetics, Scholarship, and Commentary, May 9, 2015, online at studioetquoquefide.com. In biblical studies, envelope structures are referred to as inclusio.

[xxxii] See Parry, Poetic Parallelism, 165–166 for the chiastic structure of Mosiah 3:11–16. Another possible example where the chiastic structure is framed by an “envelope chiasmus” is 2 Nephi 25:24–27. See Welch, “Chiasmus in the Book of Mormon,” 202. However, Parry, Poetic Parallelism, 112 structures this passage differently so that it does not feature an envelope chiasm. Also, Joseph M. Spencer, An Other Testament: On Typology, 2nd edition (Provo, UT: Neal A. Maxwell Institute for Religious Scholarship, 2016), 2–7 argues that Alma 36:1–5, 26–30 forms an “envelope chiasm” although he does not use that term.